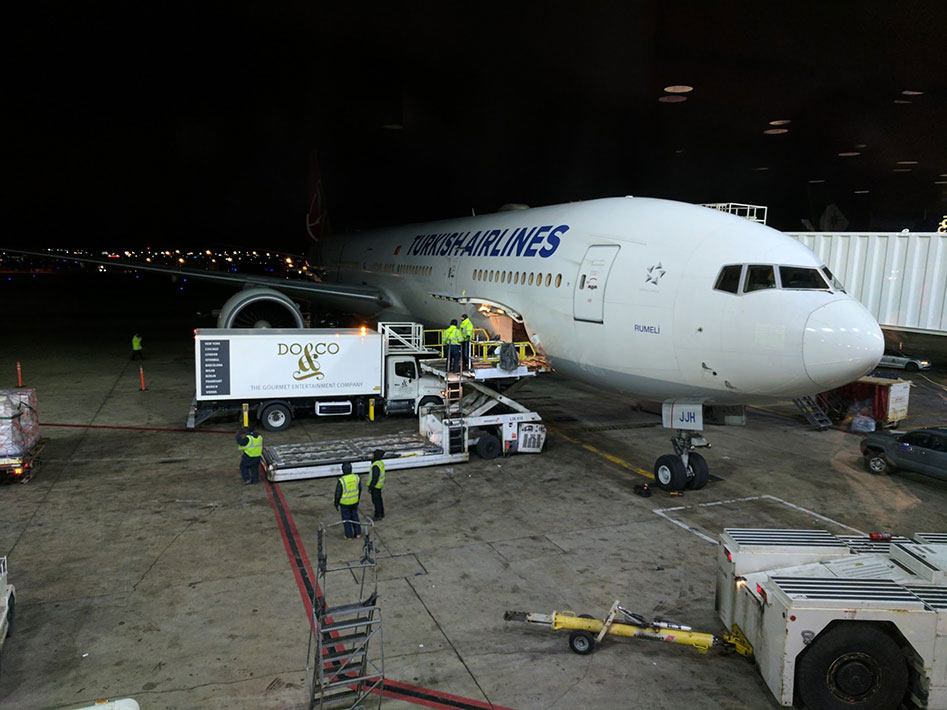 Continuing a decent string of Turkish Airlines Flight Reviews I’ve had lately, here’s a new one, and a first – going from my home airport of Chicago O’Hare ORD directly to IST. Well kind of directly, it was snowing out there so it was much less direct than preferred in reality. 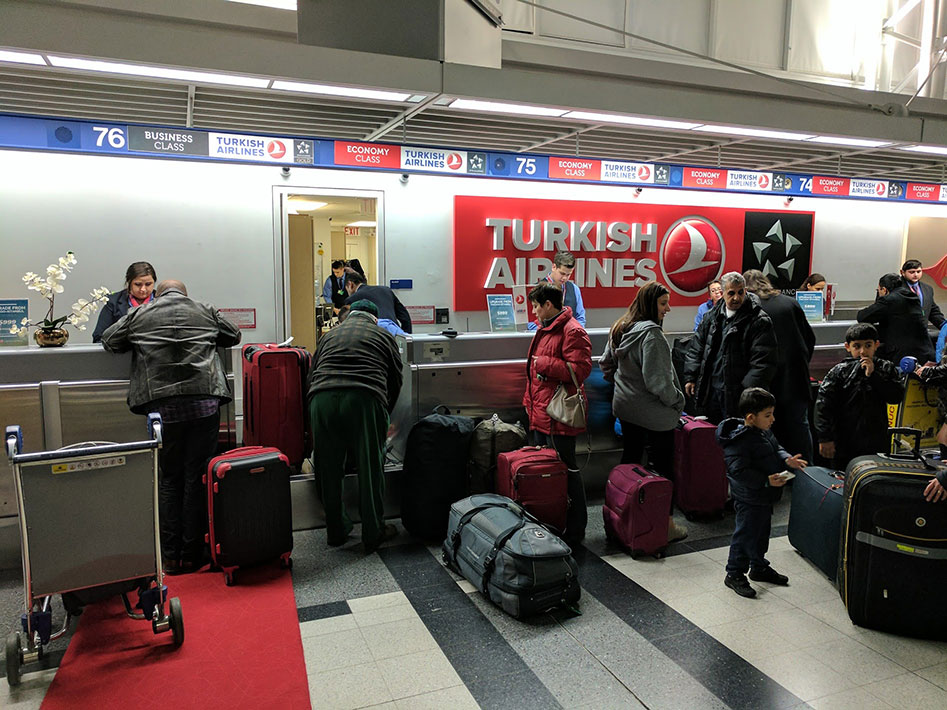 It took a lot longer than I typically expect to get to a gate agent when traveling business class. At which point it was a little weird – I did not appear to be confirmed for business class and the agent thought I was on some kind of stand by for it. In reality I purchased the ticket via United with points and it was always business class. She stated it was oversold too and I was one of the last people checking in, and that a lot of people bought last minute seats; I was curious if they’d be looking for volunteers to take a bump.

In reality, through a lot of extra typing, I got my ticket, no one appeared to get bumped nor the plan need to ask for a volunteer, and there were in fact multiple empty seats up in business class. So I’m really not sure what any of that was about. 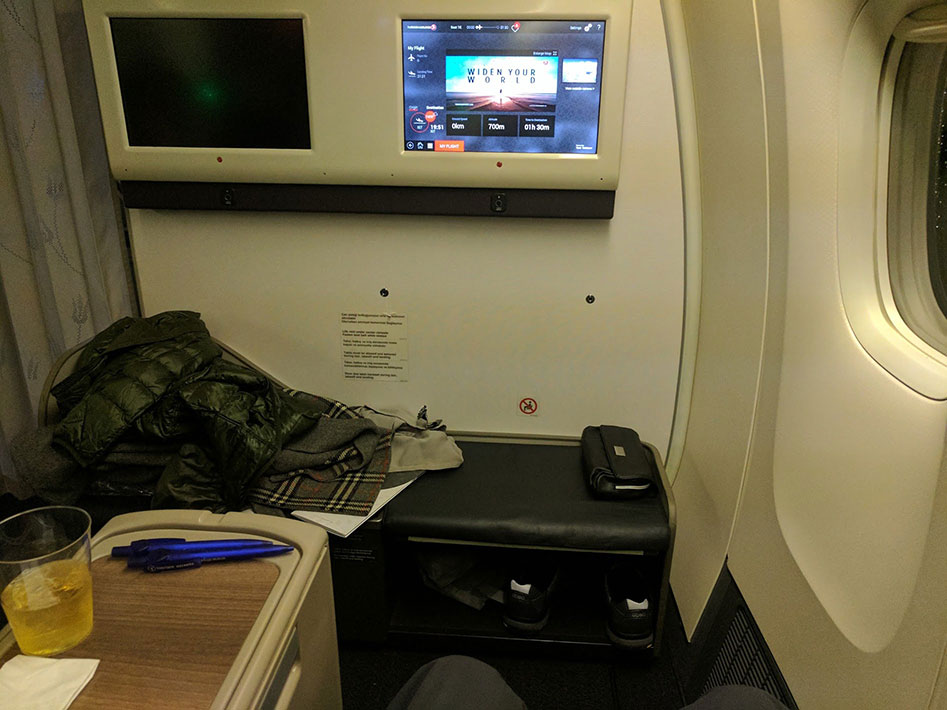 I don’t recall but flightaware says I was on an Airbus A330-300 configuration. My seat was a lie flat, 1K, although I should get less lazy about calling up to choose seats given that I’m not a huge fan of being up at the bulkhead. You can’t book them via United’s site, but after the purchase is made, they can be requested via Turkish customer support. I’m not sure if the seat has any more or less room than the others? Or if the display is further away? In any case I’m not the most keen. I watched some movies and slept a bid in this seat, as always, pretty amazing when your seat turns into any kind of bed. I don’t recall it being offered on my other recent Turkish flights but the attendant offered to make up the bed at one point when they brought out the mattress dealies. 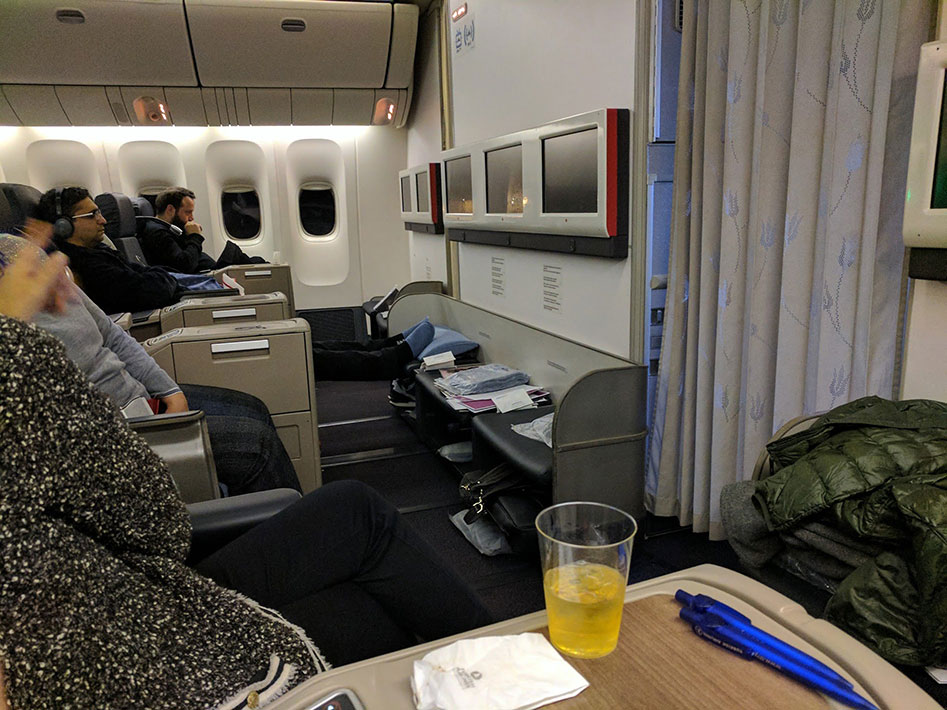 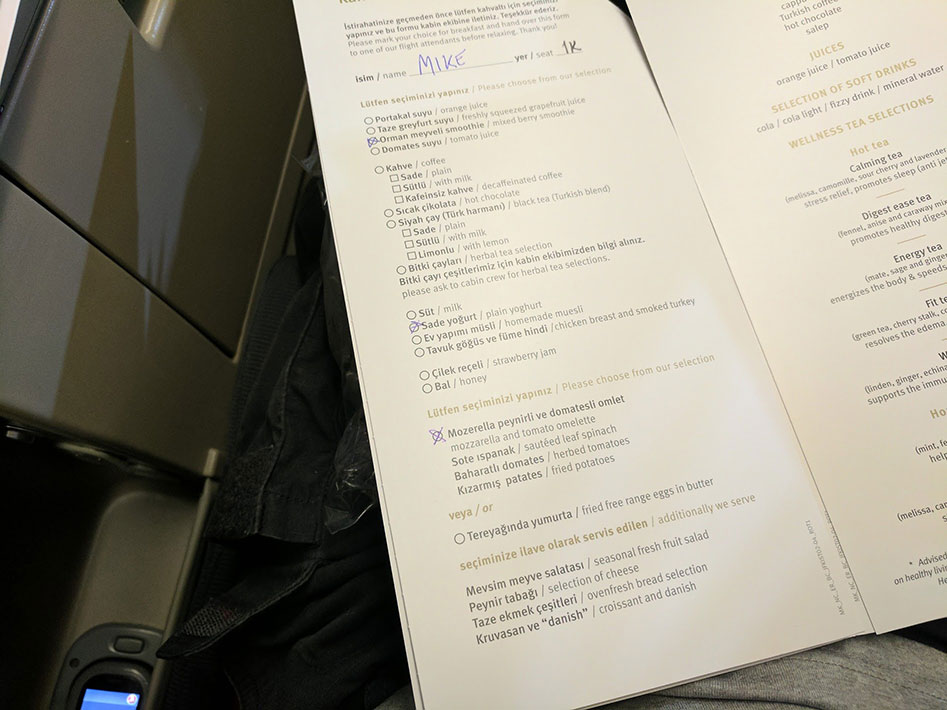 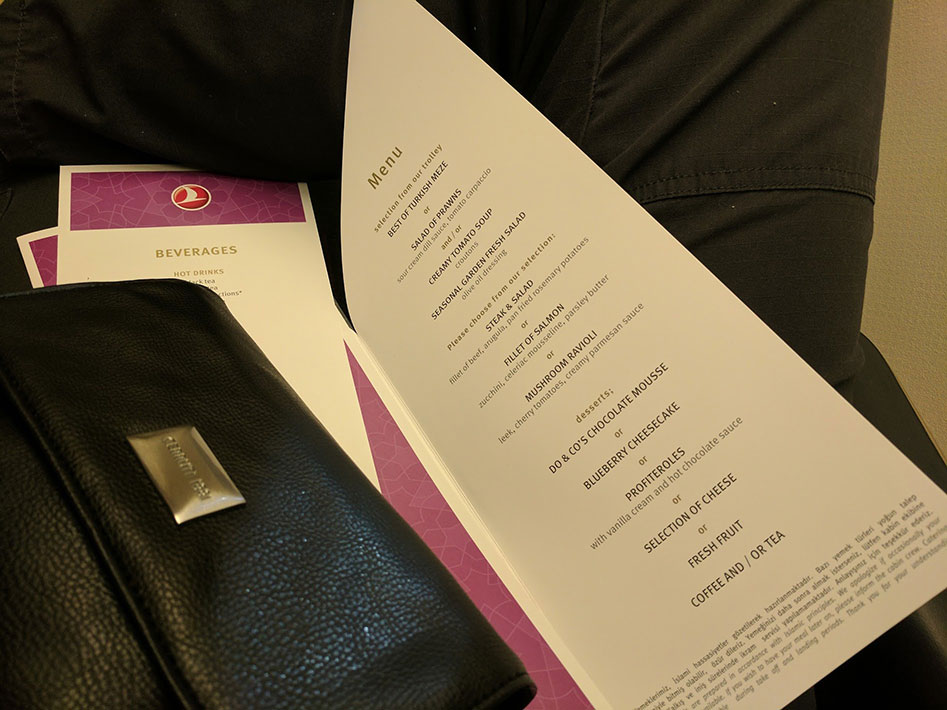 Sorry peoples I didn’t go through the kit, it’s some toiletry stuff and whatnot. I don’t get too excited about them. I typically use the socks and toothbrush. The bag was nice, sometimes I keep them, this one I did not. Cerruti, I’m sure that is some kind of fancy I am not. 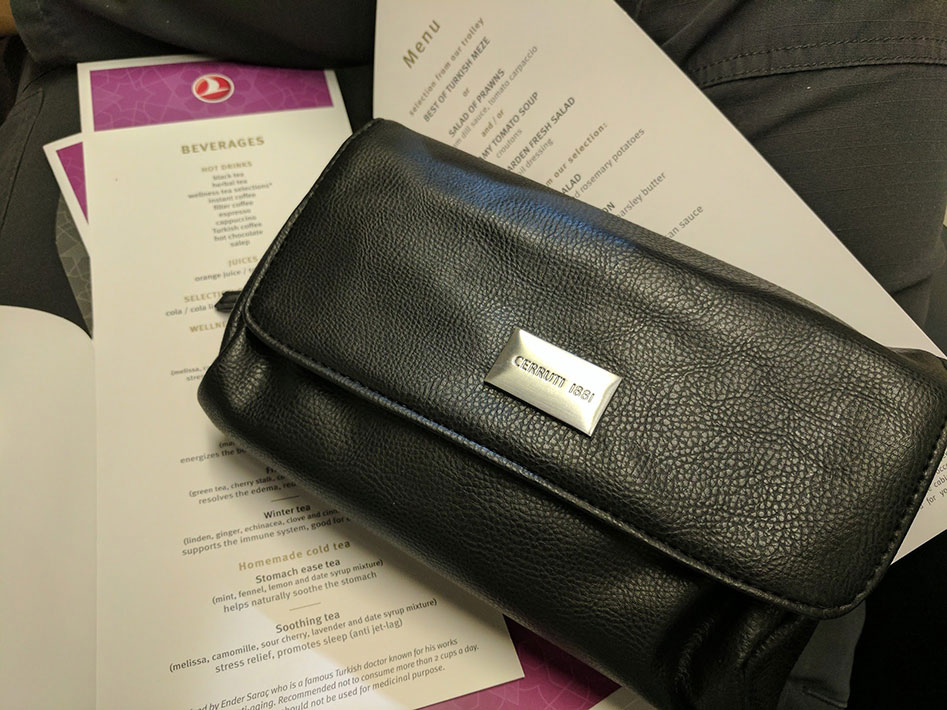 I believe these Denon headphones are a new feature. They were pretty nice although my jack/port was a little messed up so I’d have to muss to get it just right to fully watch a movie, a bit annoying. Thankfully not a problem I had on my later flight. 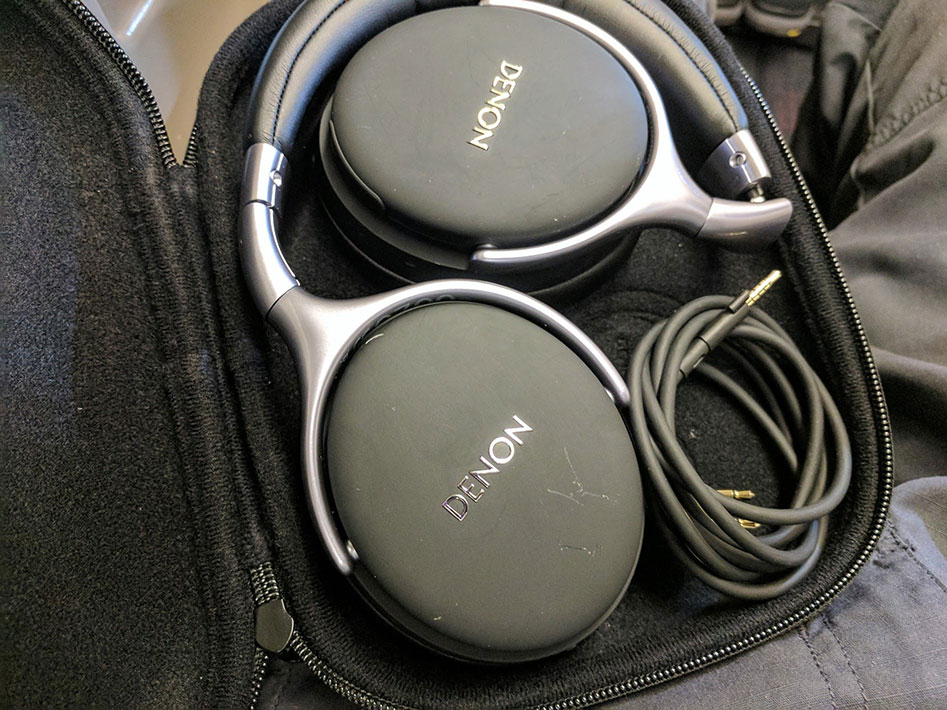 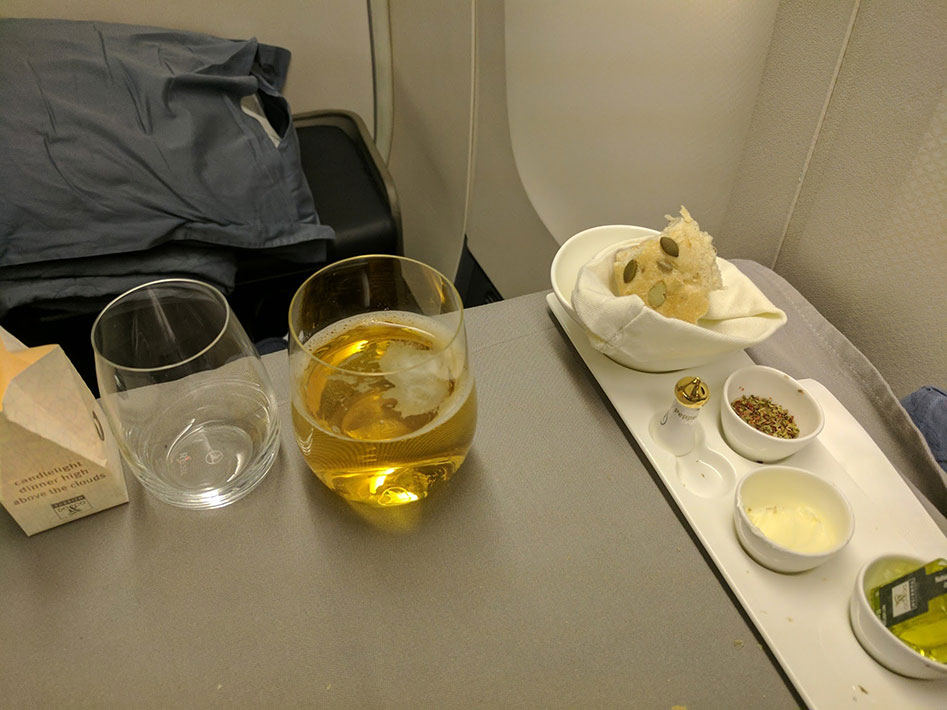 I often try the different red wines but hey, just went for beer on this trip. 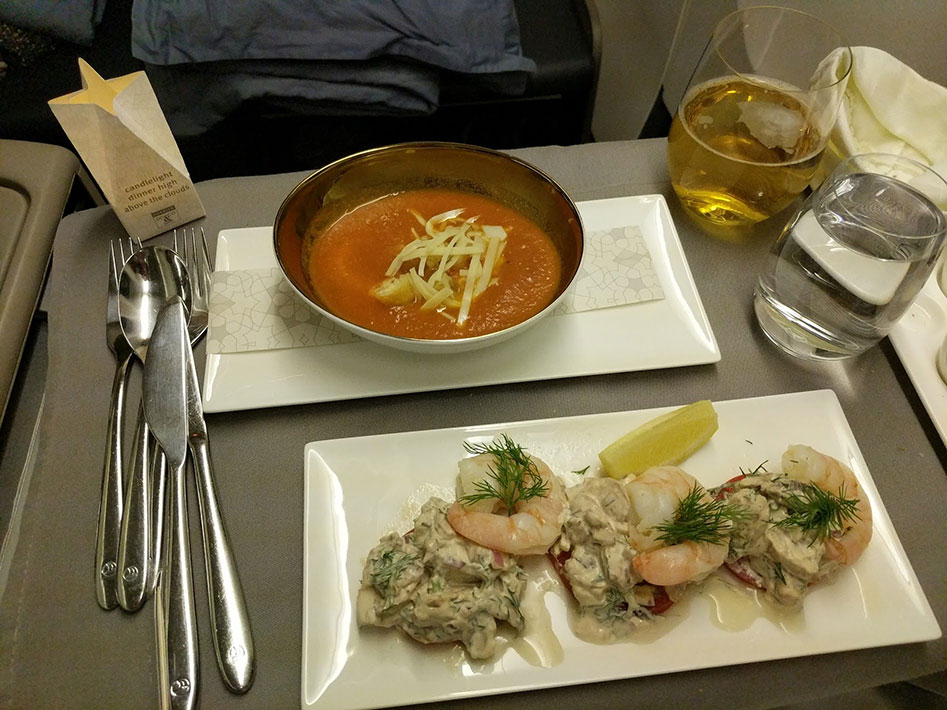 Everything here was delicious! Really tasty soup and the prawns were great as well. Are prawns just shrimp? You should know this if you’re flying business class shouldn’t you? Not that I had to google this 😉 😉 but here you go. 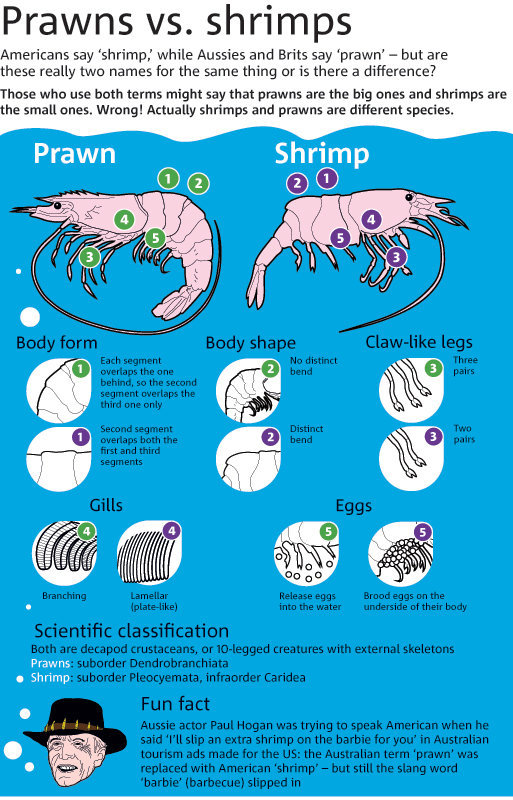 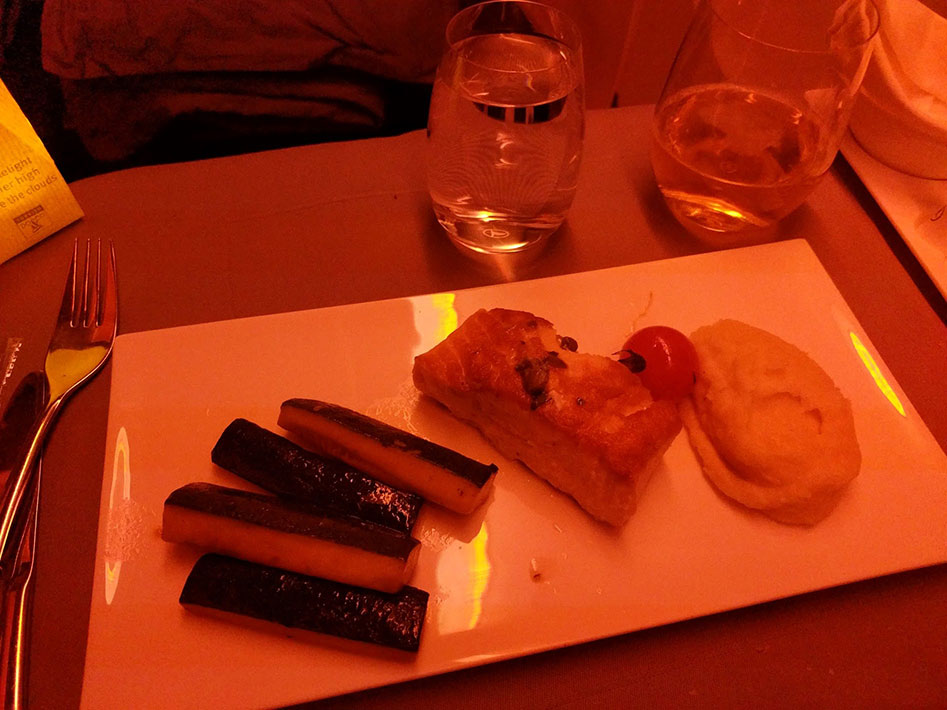 I had the salmon because I’m a salmon lover yo. I’ve had the salmon before on Turkish Airlines TK5 to Chicago – although this one was different. This salmon was good, but it sure seems small compared to the TK5 one I had, which was presented better and tasted better as I recall as well. Maybe next time I’ll try and sneak in a double salmon order if they try to slip me one of these lil baby pieces. The mood lights were set so this is now the mood you see the food in. 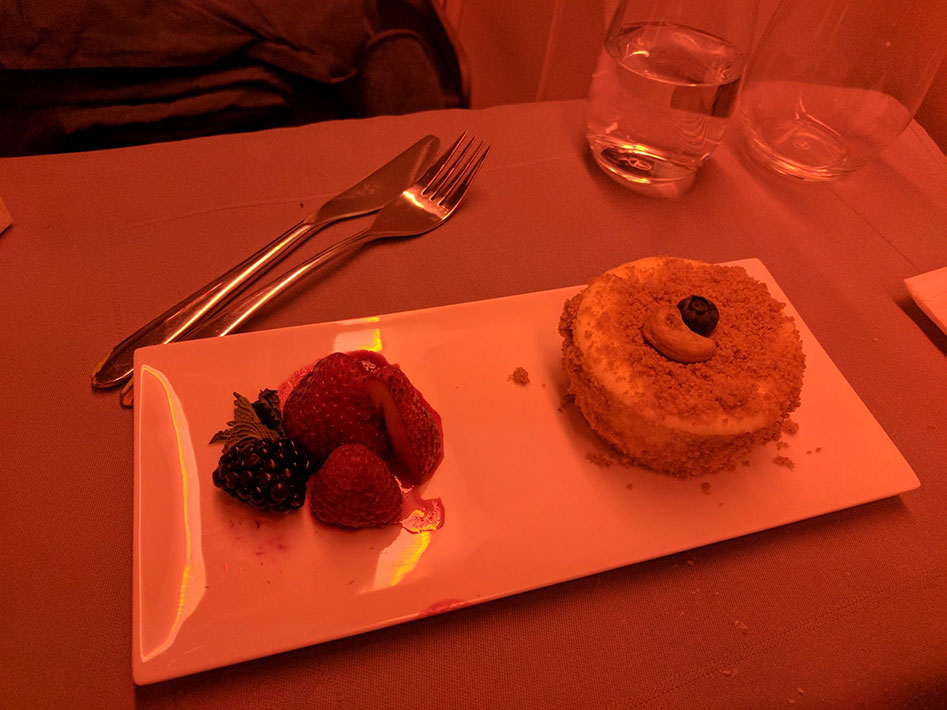 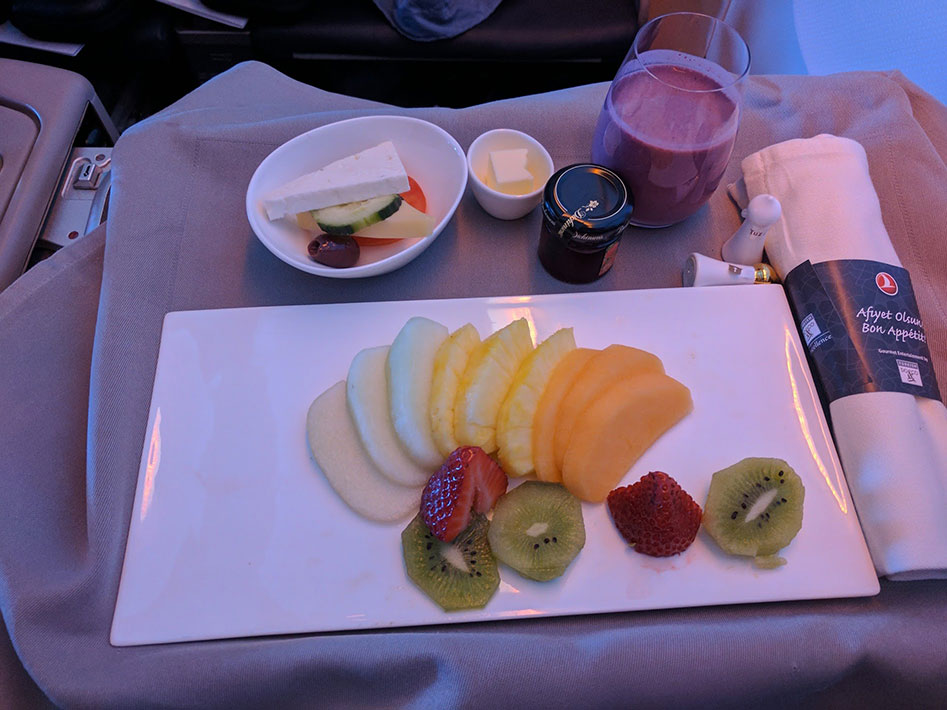 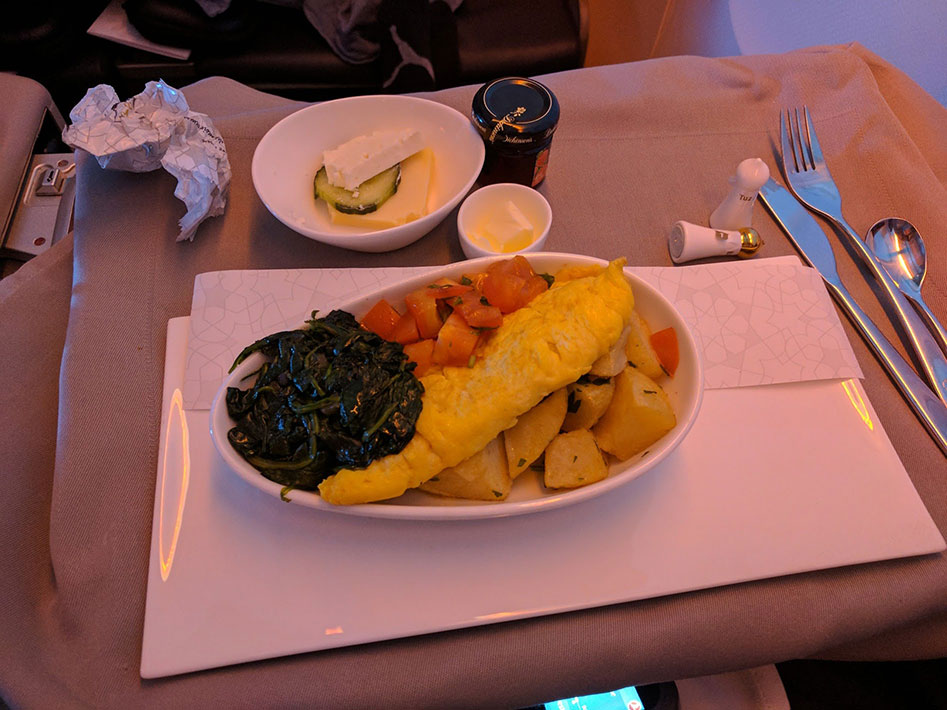 I don’t recall if I got that yogurt. Omelette was decent. I’m generally not a big fan of plane breakfast and would prefer to just eat lunch/dinner meals all the time on them. Breakfast is probably a lot cheaper and simpler for them too though. 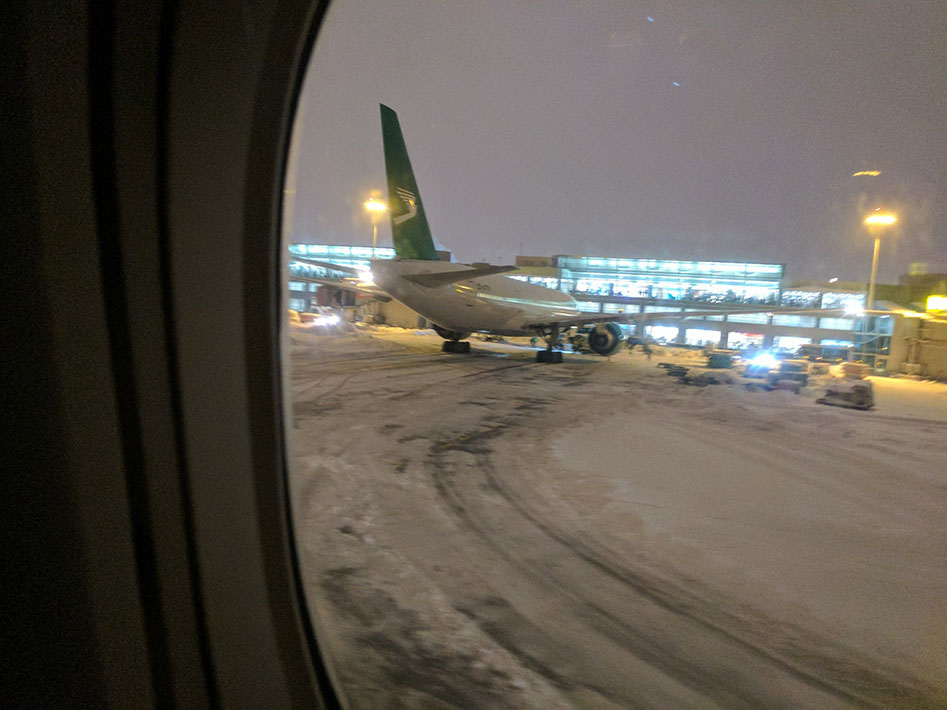 So seriously, this was rough. We left late because Istanbul was hit with a lot of snow they were not equipped to deal with. I had set a long layover for my next flight to enjoy the amazing Turkish Airlines lounge, plus I hit the rules to get one of the suite rooms there to take a nap in, or at least I thought I’d be able to do that. In reality, we couldn’t land at Istanbul so we were going to be re-routed – I thought to the other Istanbul airport (SAW) – although in reality we were directed to some other overflow airport. Except when we got there, they were too full – so we got redirected to GZT. Close to a little place called Syria. :p 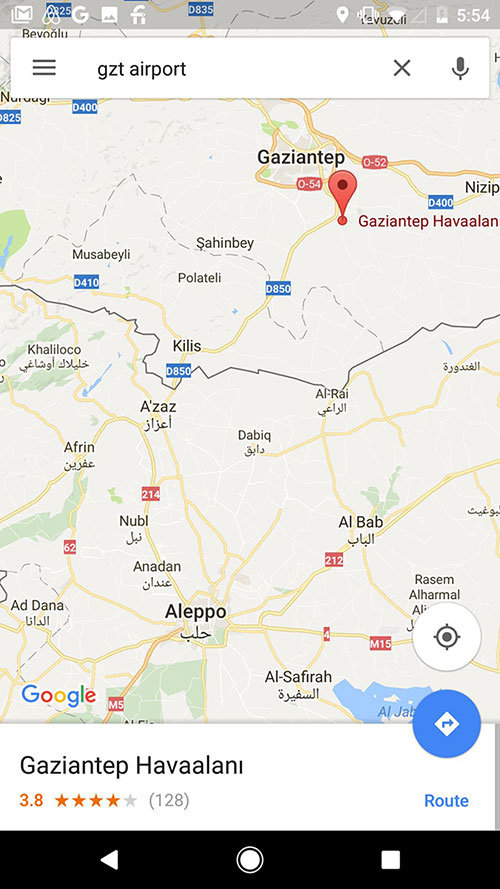 Luckily we stayed on the plane here, I’m sure the airport didn’t exactly have the amenities of IST. We refueled here and sat quite a long time. Most people missed their subsequent flights while sitting here although I was still in the clear. Eventually we took off and went to IST where we landed and arrived safely. 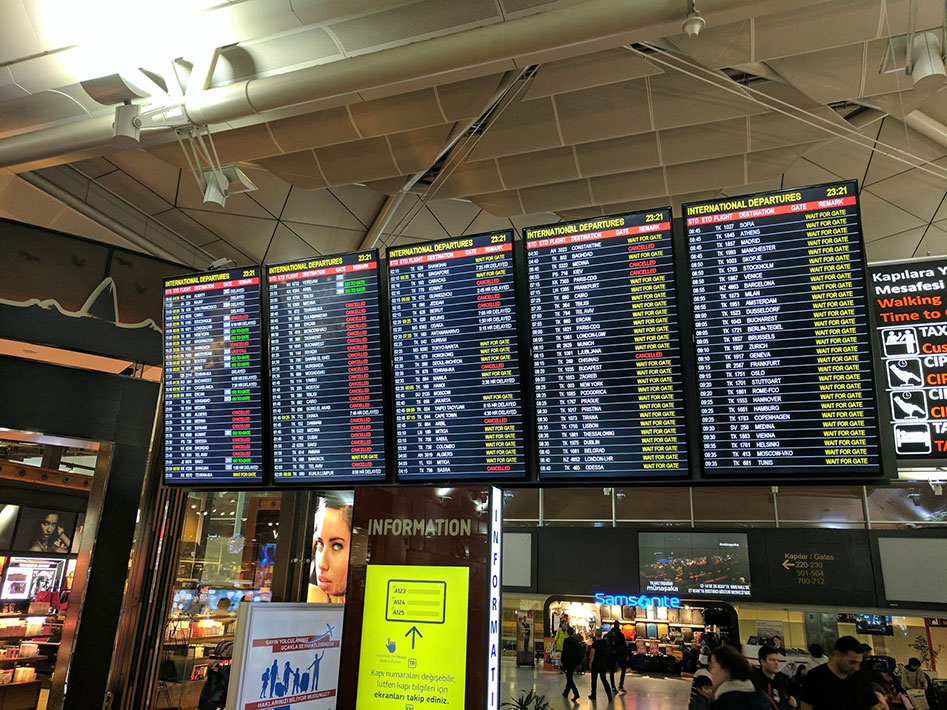 It was pretty crazy there, and some people had been stuck in the airport for days. Many a cancellation up on the screen. Thankfully I still had a few hours to spend in the TTurkish Airlines lounge, and was able to make my next flight, Turkish Airlines TK84, to Manila on time. 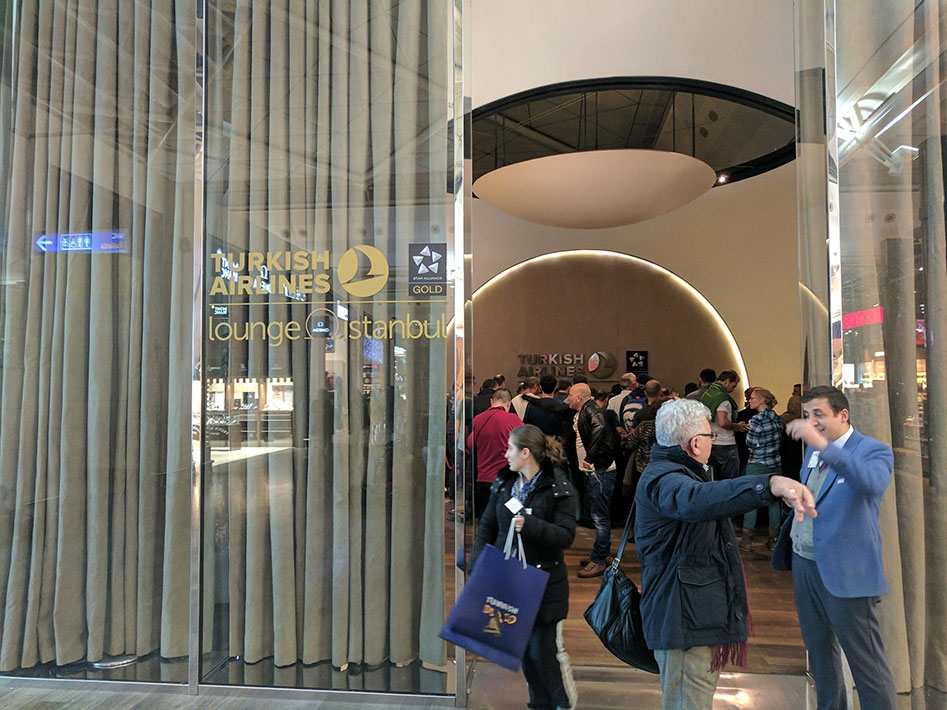 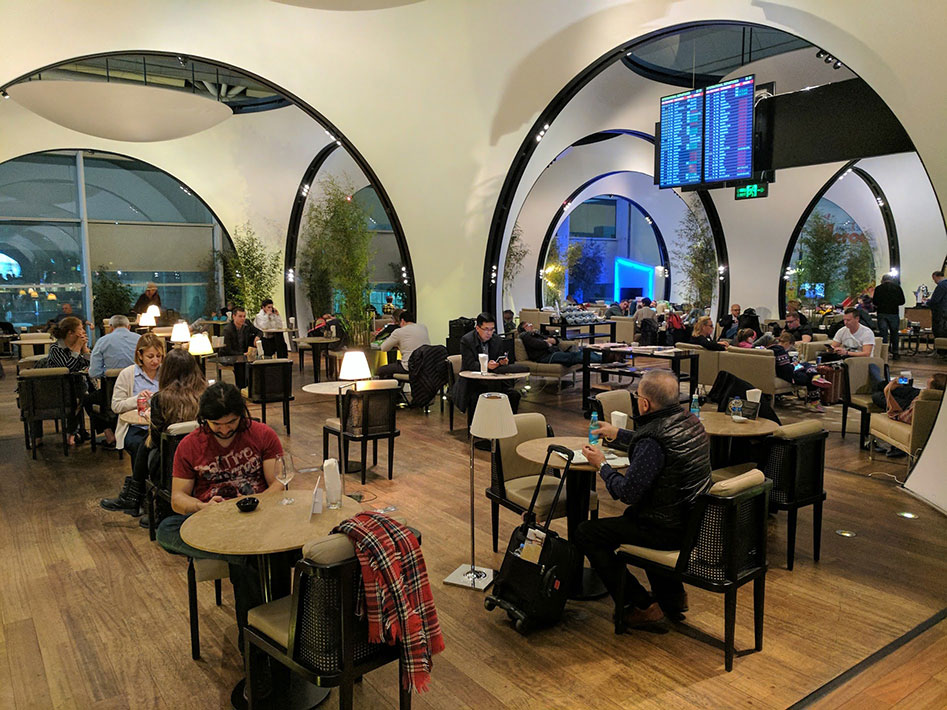 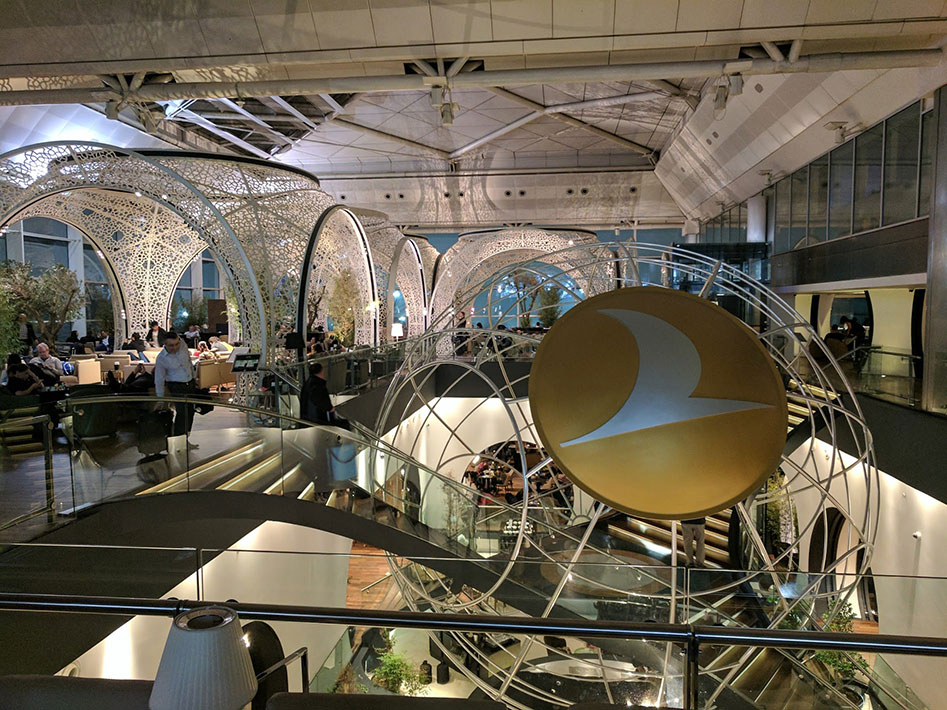