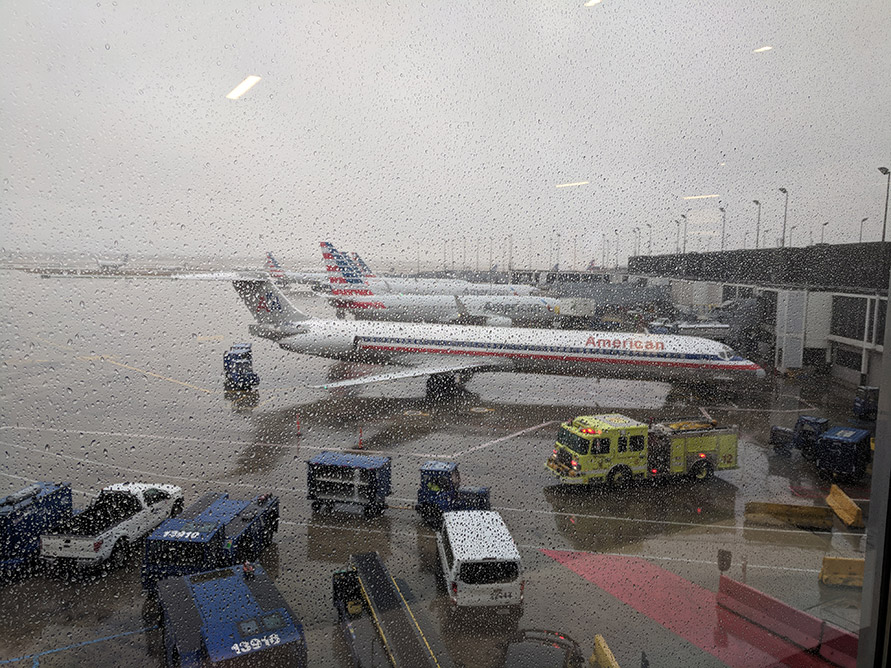 Leaving Chicago on a rainy January day – at least it’s not snow making life harder for us to do so! I haven’t been flying much lately, particularly on American Airlines; it was a good thing I checked terminals for my flight, as my last many from ORD have been leaving out of the international terminal 5. JAL arrives at terminal 5 – but they fly out of the AA terminal, terminal 3! They also share the AA lounge space. 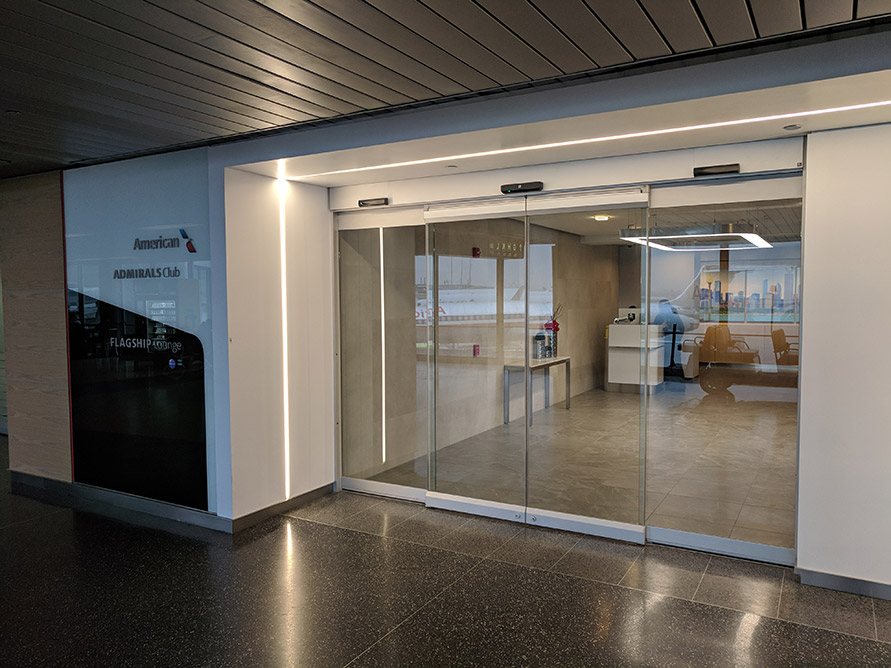 AA totally converted the lounge between H and K, now it’s a flagship AA lounge, which I liked even more than the JAL one. It seems smaller in some regards, and I wonder if it has the same seating space as the old version of the lounge. It looks a lot nicer and the food options are many times more nicer and numerous than in the past. I wish the lounge was this awesome back when I was flying all the time and was AA Executive Platinum! Now I am back to AA peon. Oneworld Zirconium status. 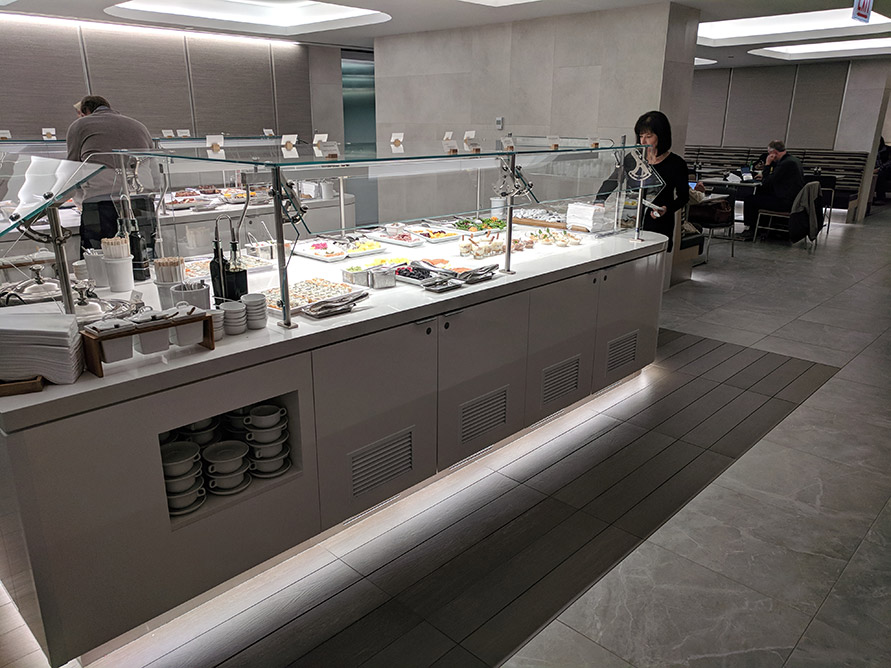 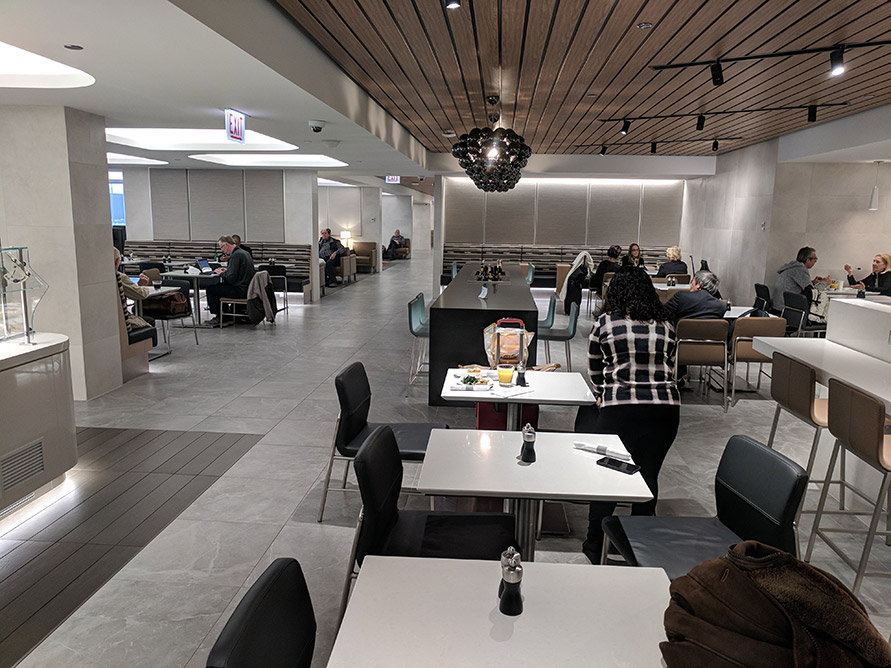 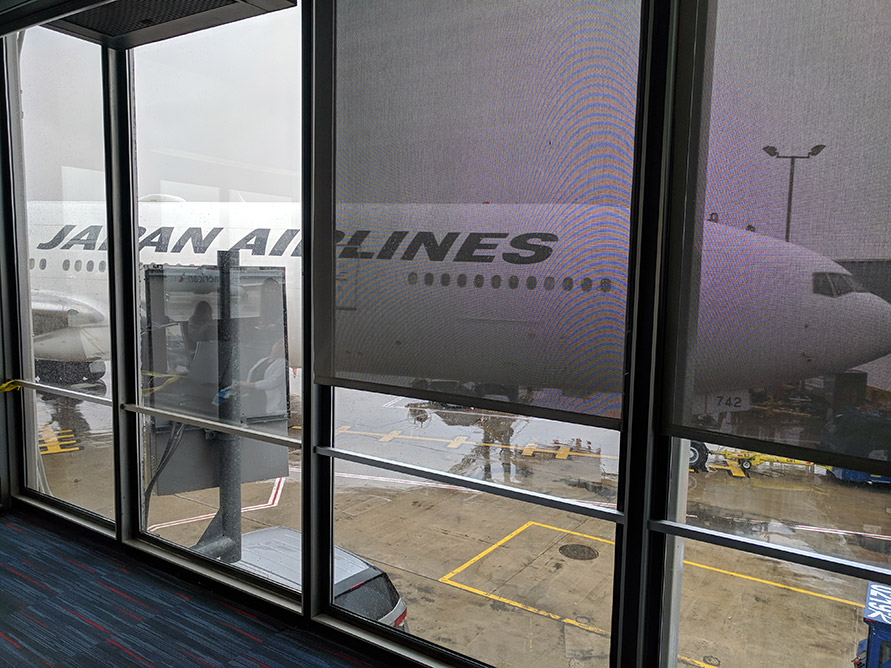 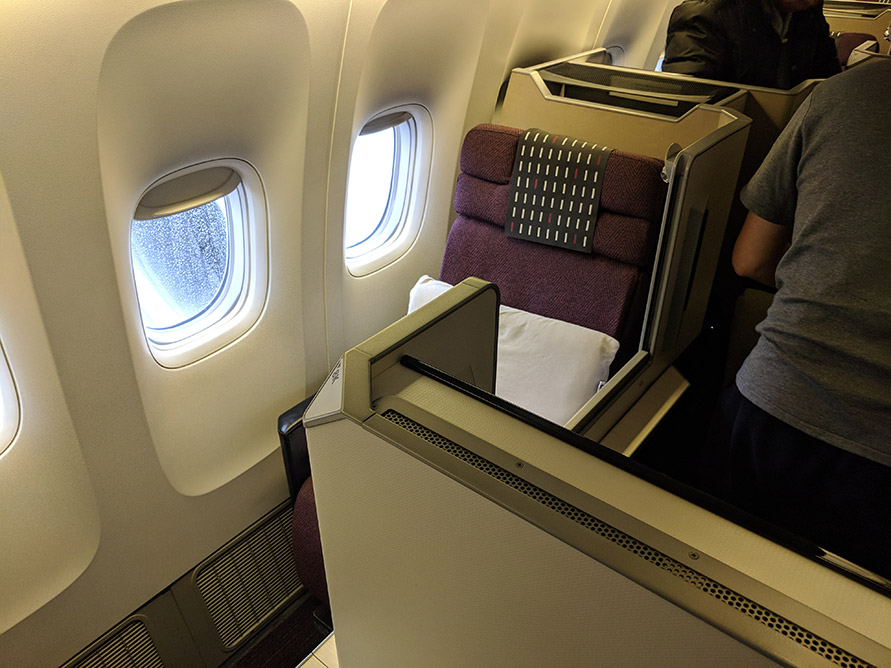 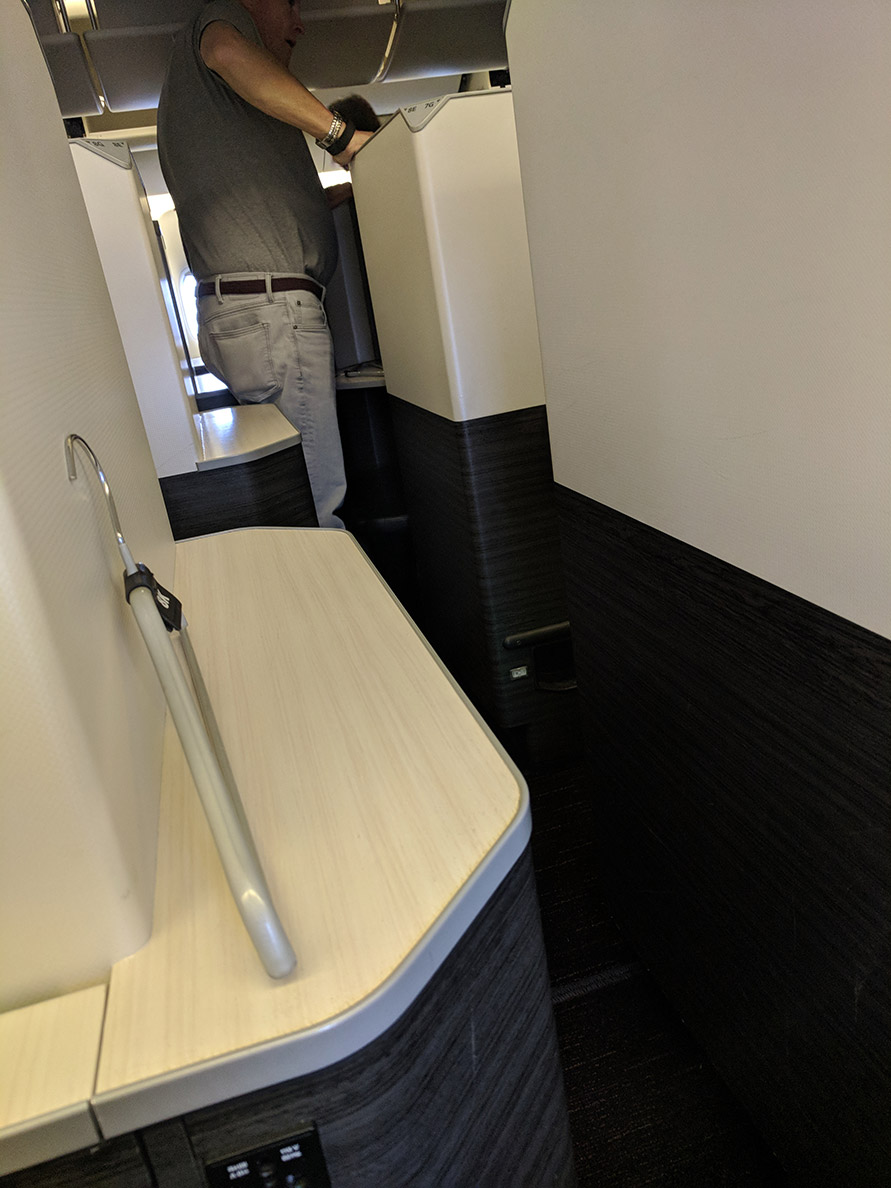 While I placed some things on this ledge with the hangar, pretty much what you see is what you get – there’s like *no* storage up in here! I think the least available I’ve ever had in a premium class international flight. Note the divider and my staggered neighbor – we’re not so far away. The divider can be moved up or down. 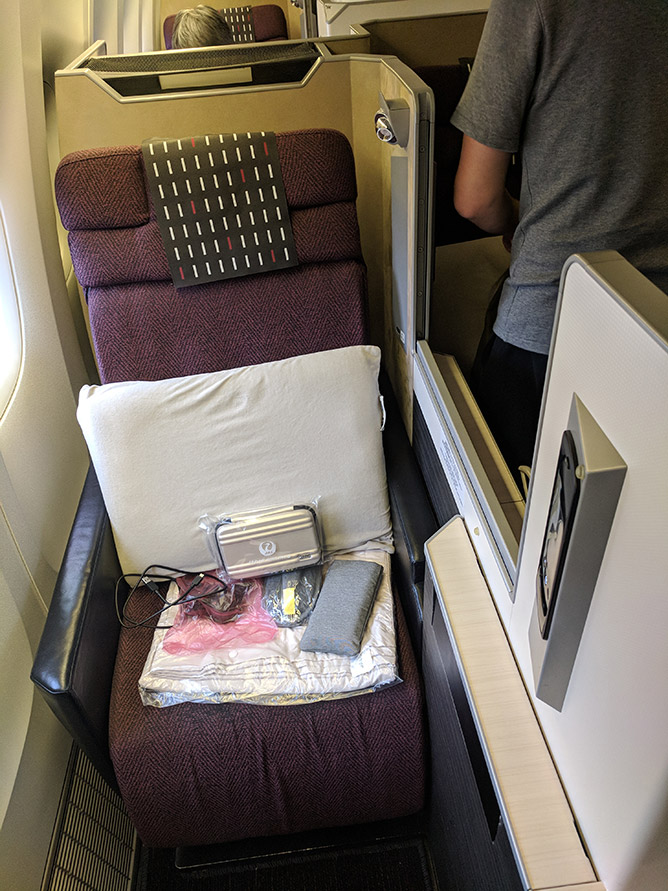 I’m 6’2″ and had pretty good leg room on this flight. Couldn’t lie totally straight but I sleep crouched up a little anyway, although it would have been nicer with a little wider seat. I mostly watched movies on this flight. 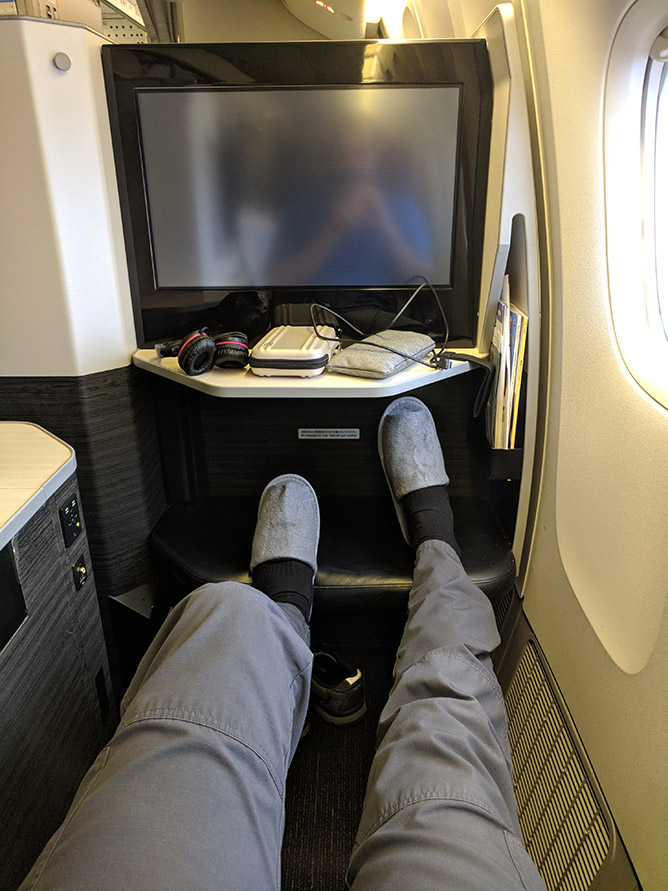 Hmm should I go for this JAL cardigan? 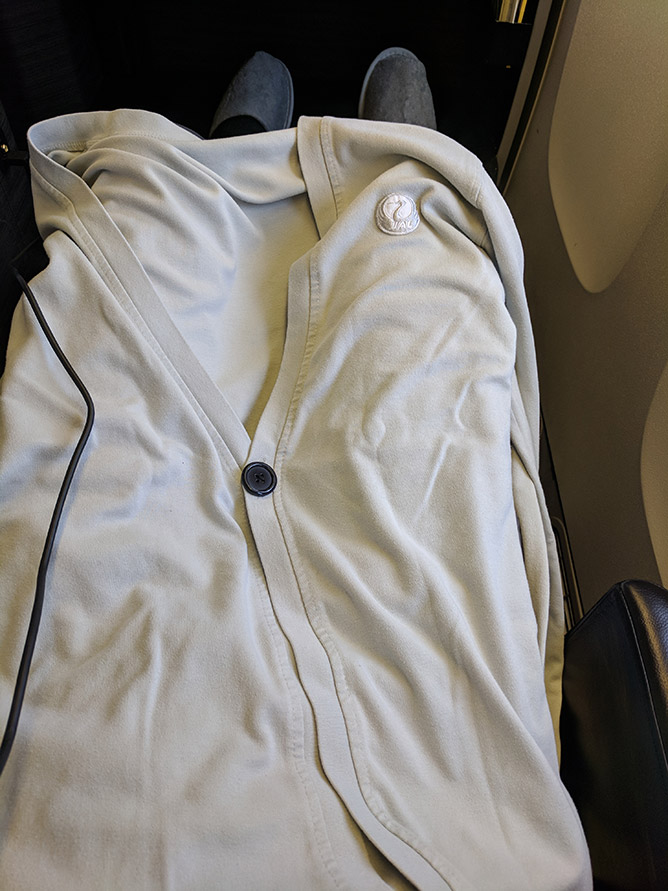 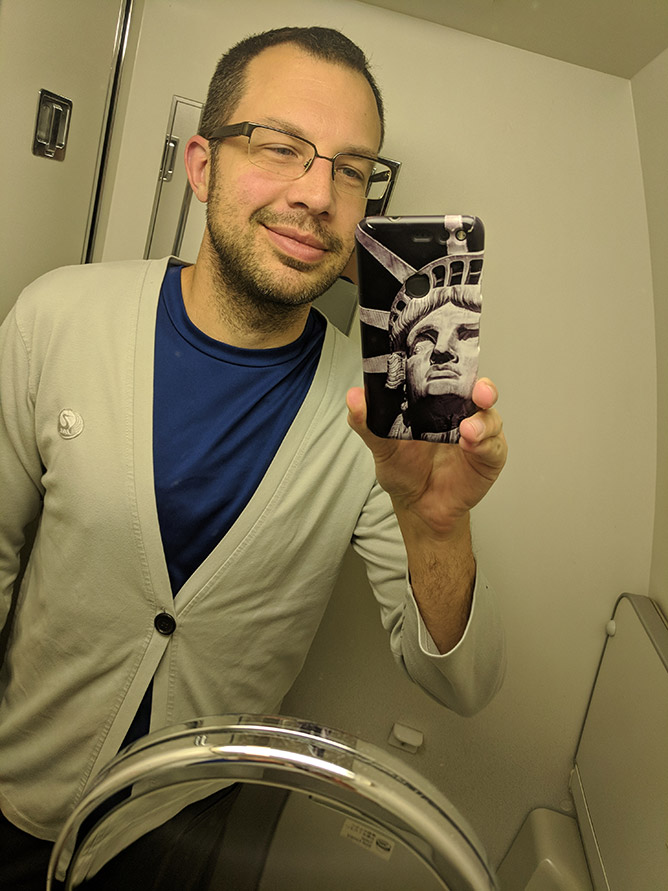 Usually these things ask you at startup your language preference, or it’s reasonably obvious under settings – I watched at least 2 movies before fiddling with the thing and accidentally figuring out where to pick my language. I thought it was just fully on Japanese and that was it up until that point. From the main screen you didn’t go to config – you had to actually hit the back/reverse button to go ‘up’ at this home menu to be able to choose a language. 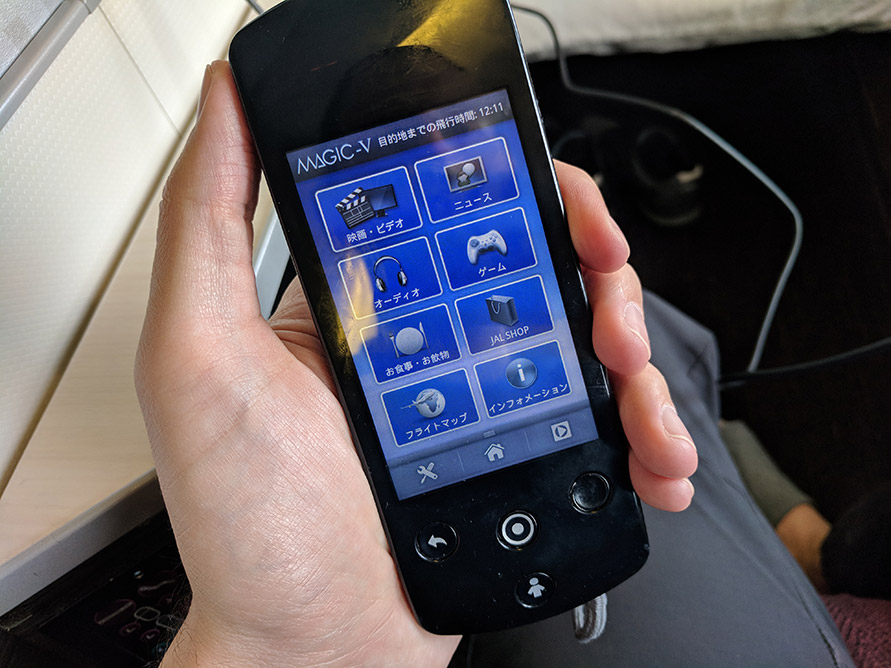 The noise cancelling headphones seemed to work pretty well, although my left ear speaker would occasionally add some crackle that wouldn’t be there if I turned off the cancellation part. 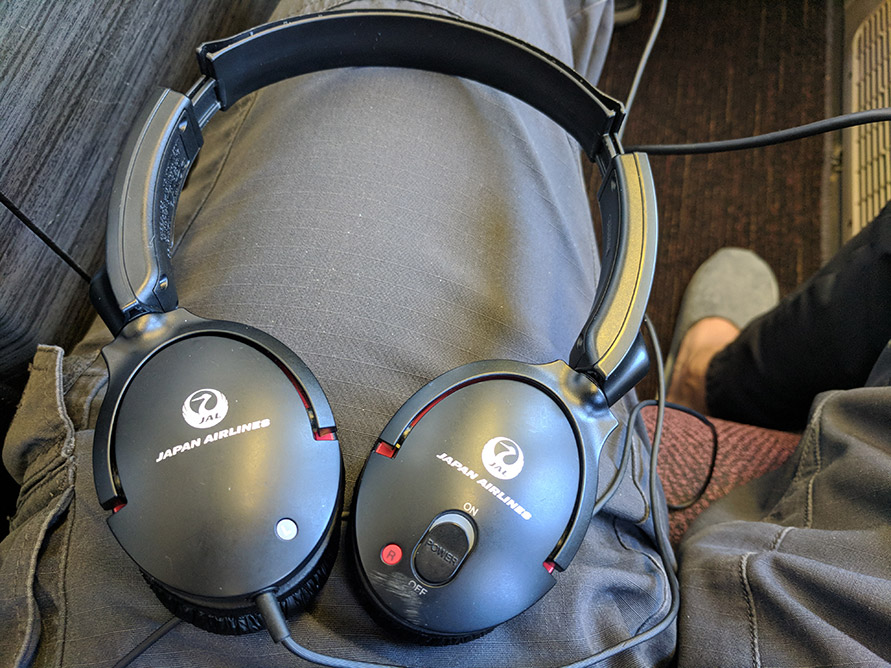 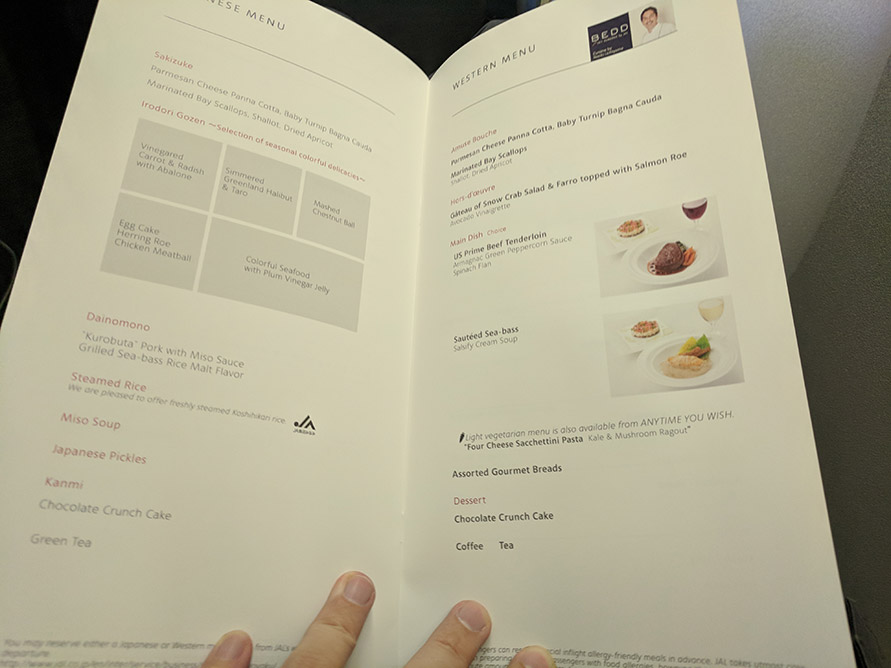 The menu – I had the beef option. 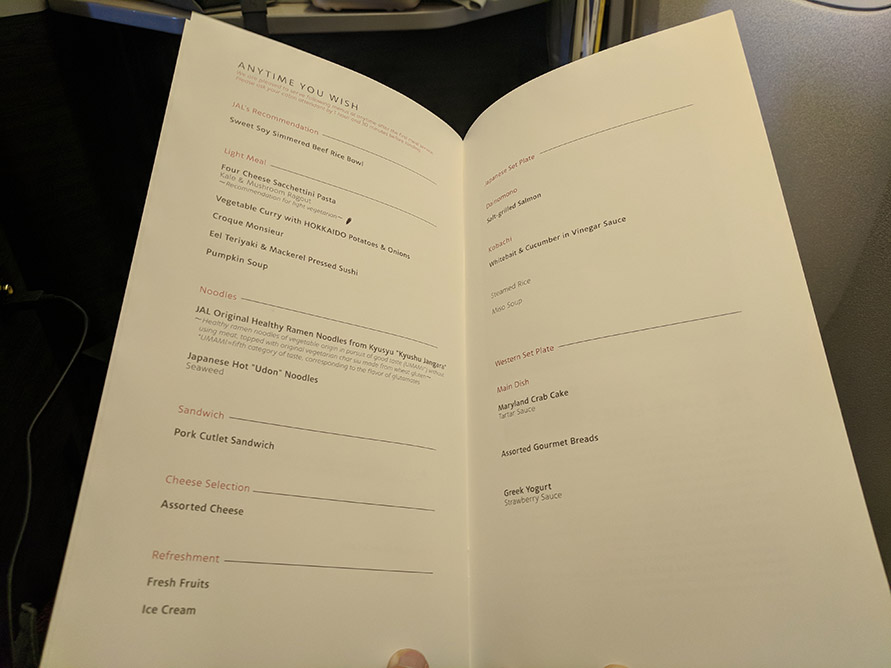 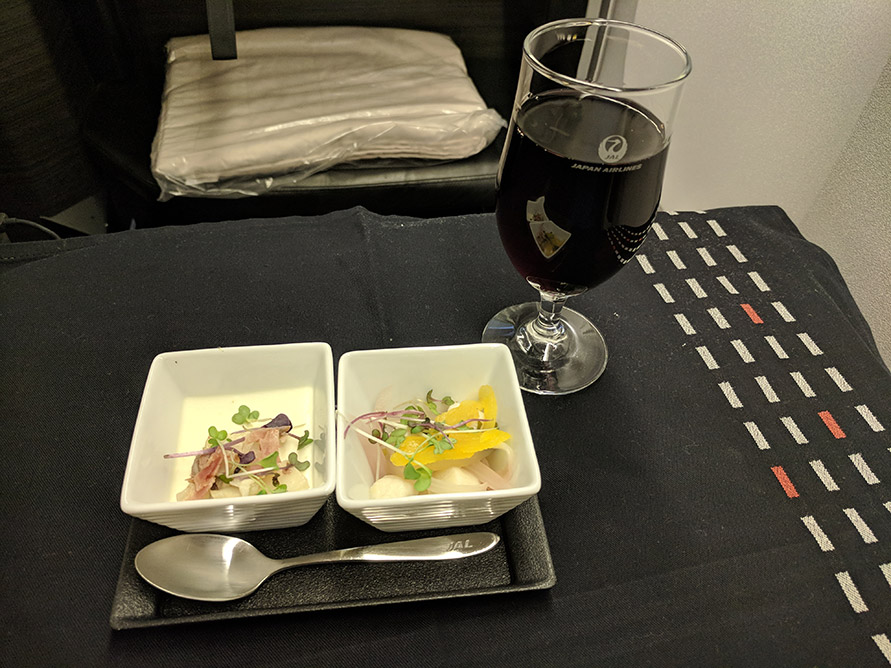 The starters were pretty tasty. 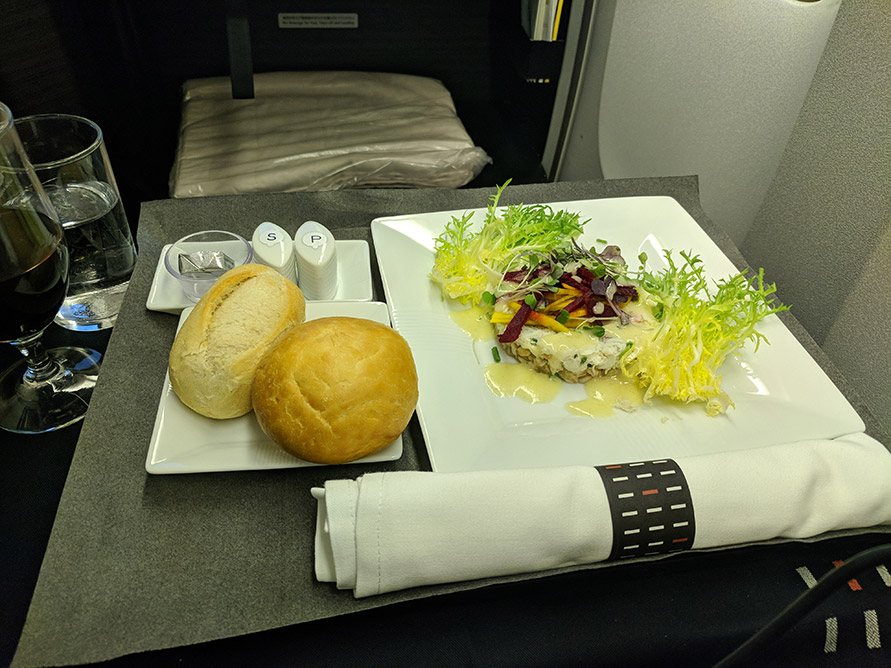 The beef was great! 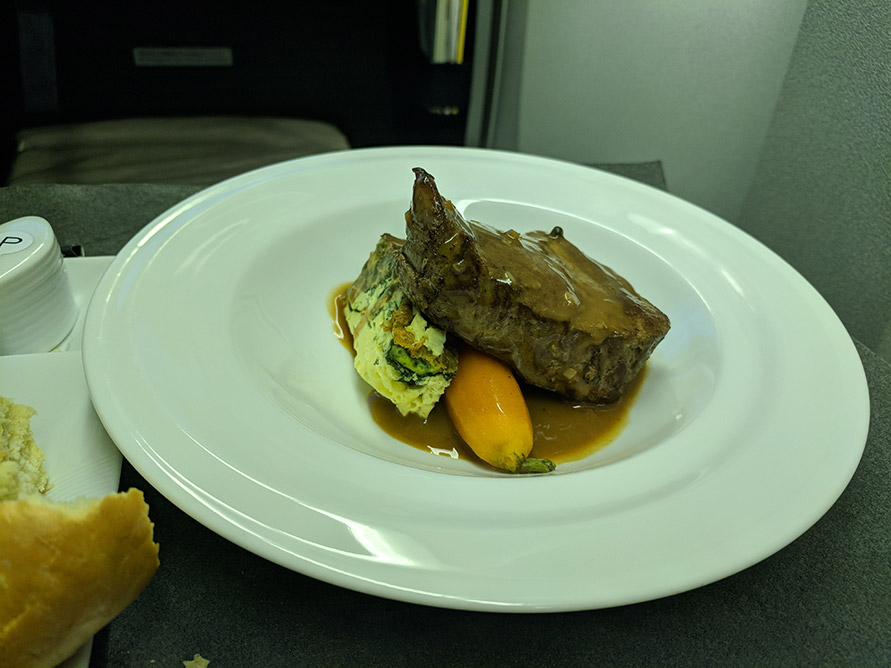 I could have eaten another one of these guys too… 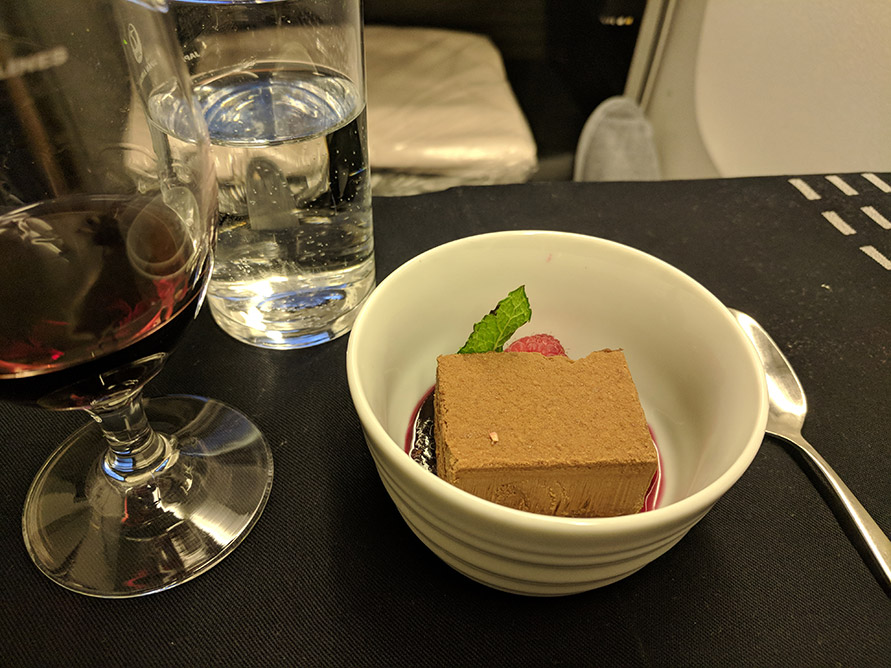 I had the Japanese set plate upon entry – even though I was really curious about the crab cakes. I’m a big salmon fan though and just couldn’t resist it. I’m bad with chopsticks, so I was happy to be in a spot where no one could really see me (cheat). The salmon was good, I would have loved to have some more of it though. The miso soup was not nearly as good as my next flight, pretty watery and unflavorful. 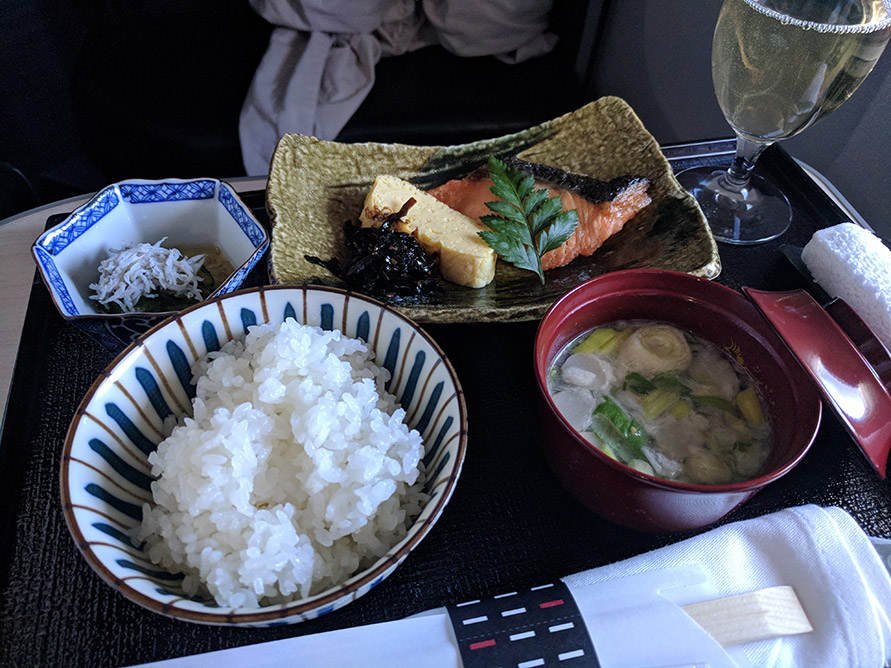 There were a large amount of solar panels scattered about here and there as we flew into Narita, very noticeable. 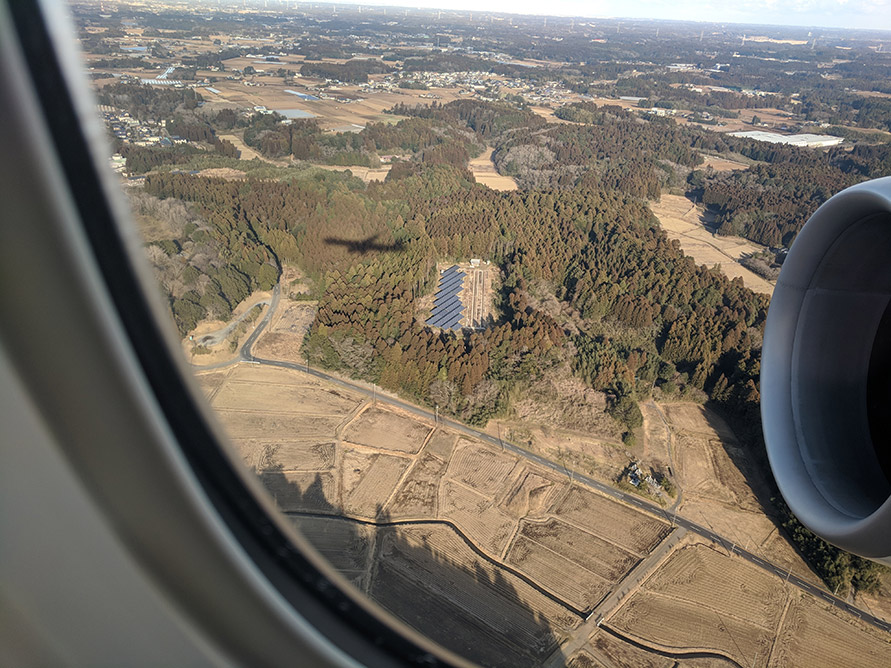 I’ve arrived in Japan – the 4th time transiting through a Tokyo airport, but my 0th time actually leaving and exploring the country. I will definitely visit and explore some time though! 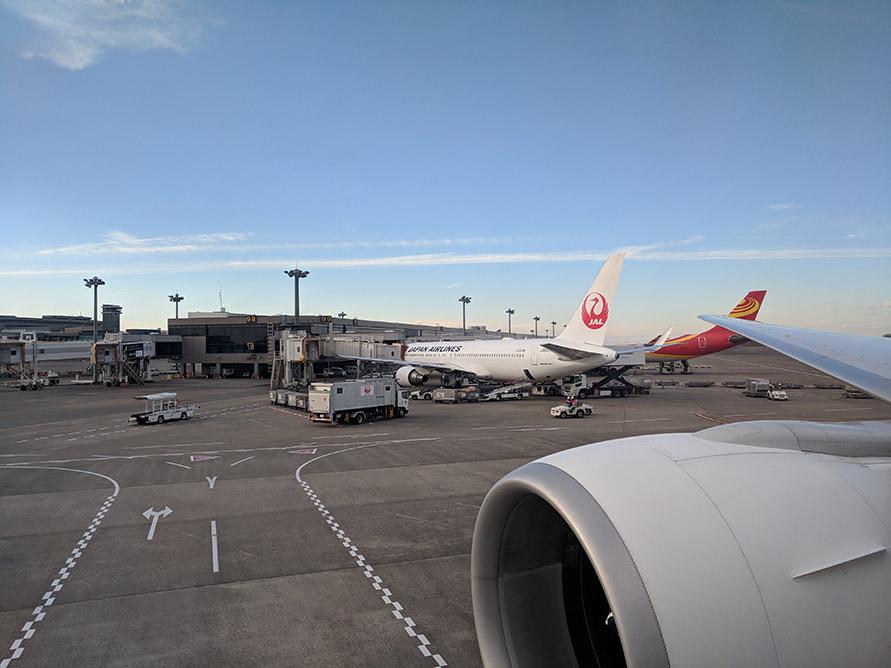