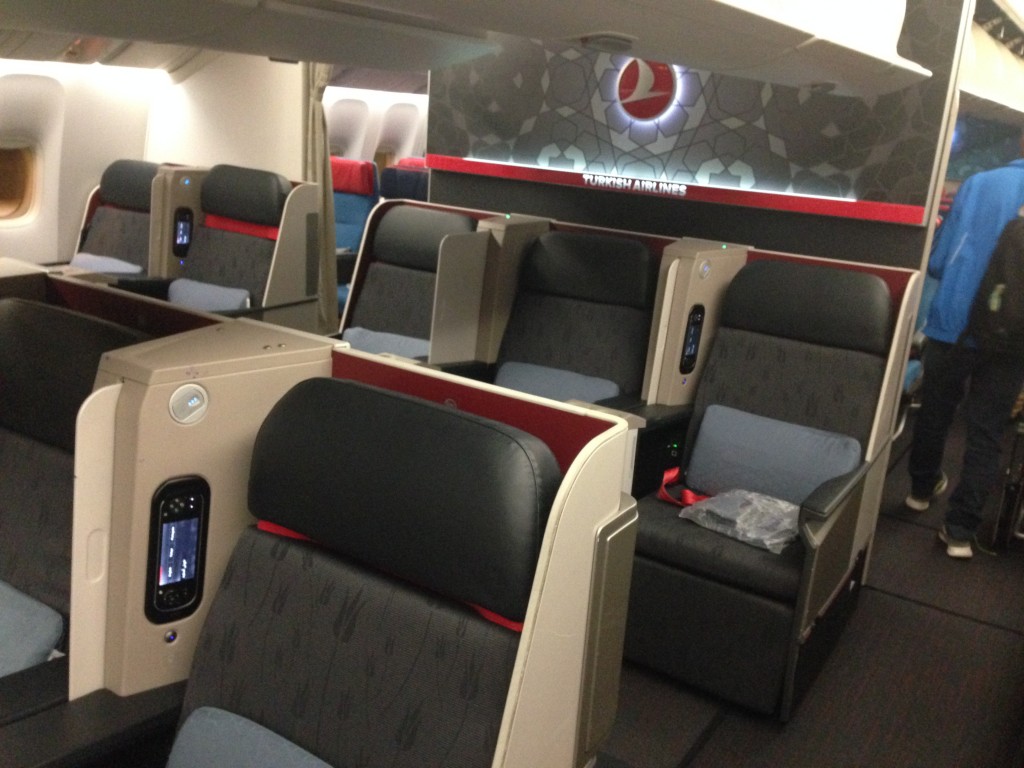 Lounge Access
With this ticket, access to Singapore, United, and Thai lounges was available. United and Thai were more conveniently located and the reviews on LoungeBuddy seemed similar enough to me; I ended up just passing the time in Thai’s lounge. I did set an alarm to be sure to leave early as it was necessary to take a tram to another terminal for my flight, one which did not have any accessible lounges to me. Pretty standard fare international lounge again, although oops forgot to take any pictures. The terminal did look pretty cool. 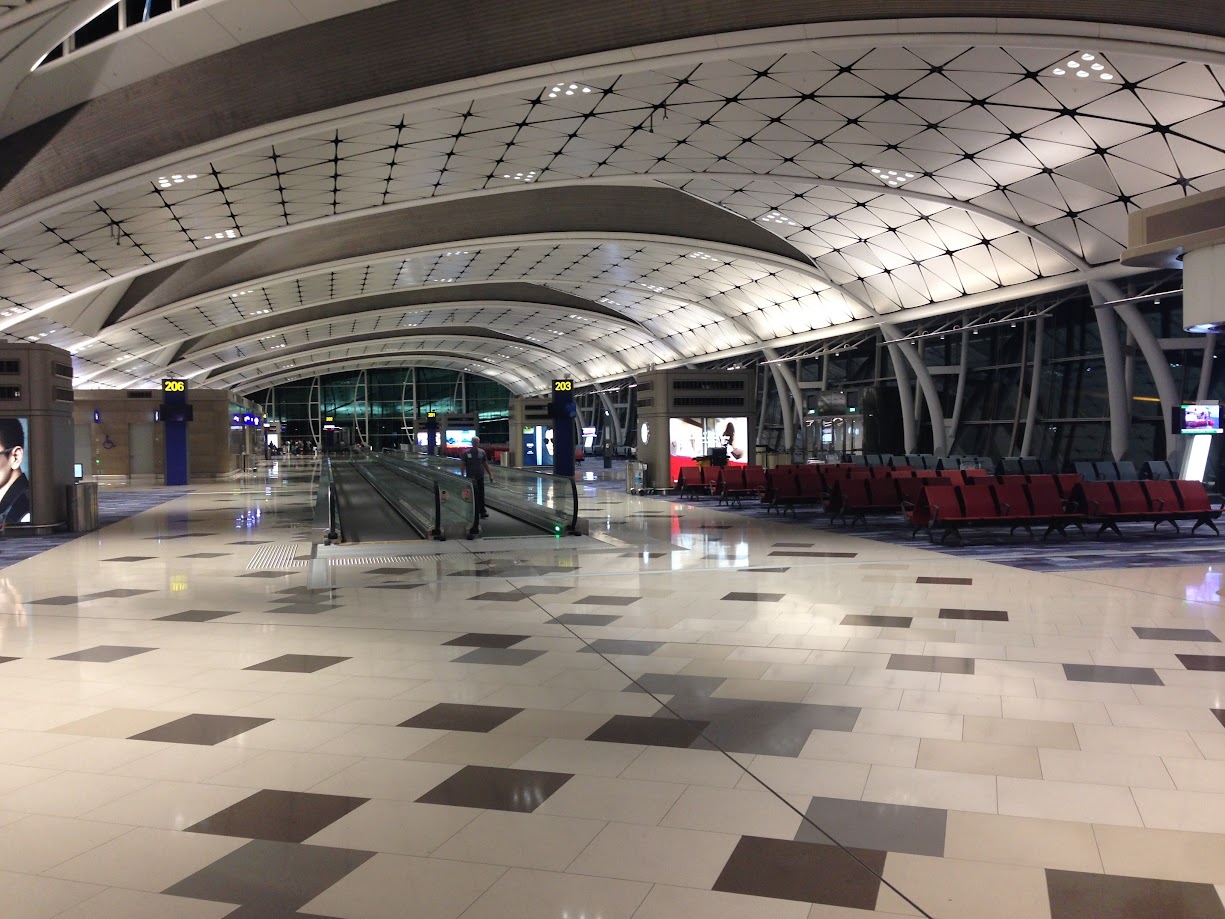 Seat
I had seat 6B next to a neighbor on the Turkish configured 777-300ER. A few of the other seats were open on this route as well. These are 177 degree recline lie flat seats and I had no problem curling up and sleeping to get some rest when the time came at 6’2″. These seats are comfortable although ultimately you have a neighbor to step over/stepping over you, which is not nearly as nice as your own little area like the business class flight I recently had prior on ANA with this configuration. In any case, still very comfortable and tons of space – I’m not really going to make a big deal out of things like that when getting to fly in a bed with multi-course meals across the planet. 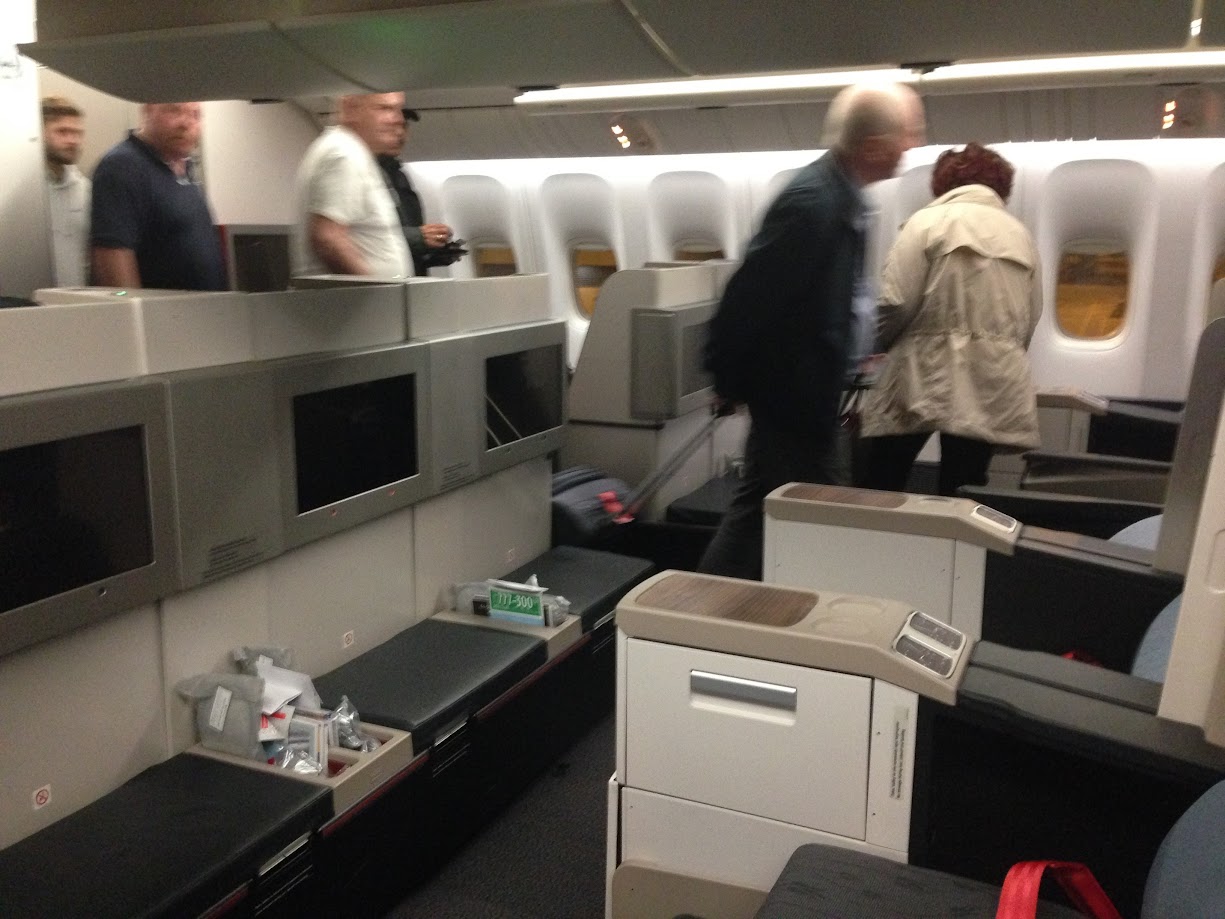 Food
Turkish Airlines has ‘flying chefs’ that prepare meals for business and first class, which is pretty cool. They are consistently voted as a top airline as well, so expectations run a little higher on them for sure. I had the chicken, which was pretty tasty. Overall fun to get a bunch of nicely presented and interesting things to eat. 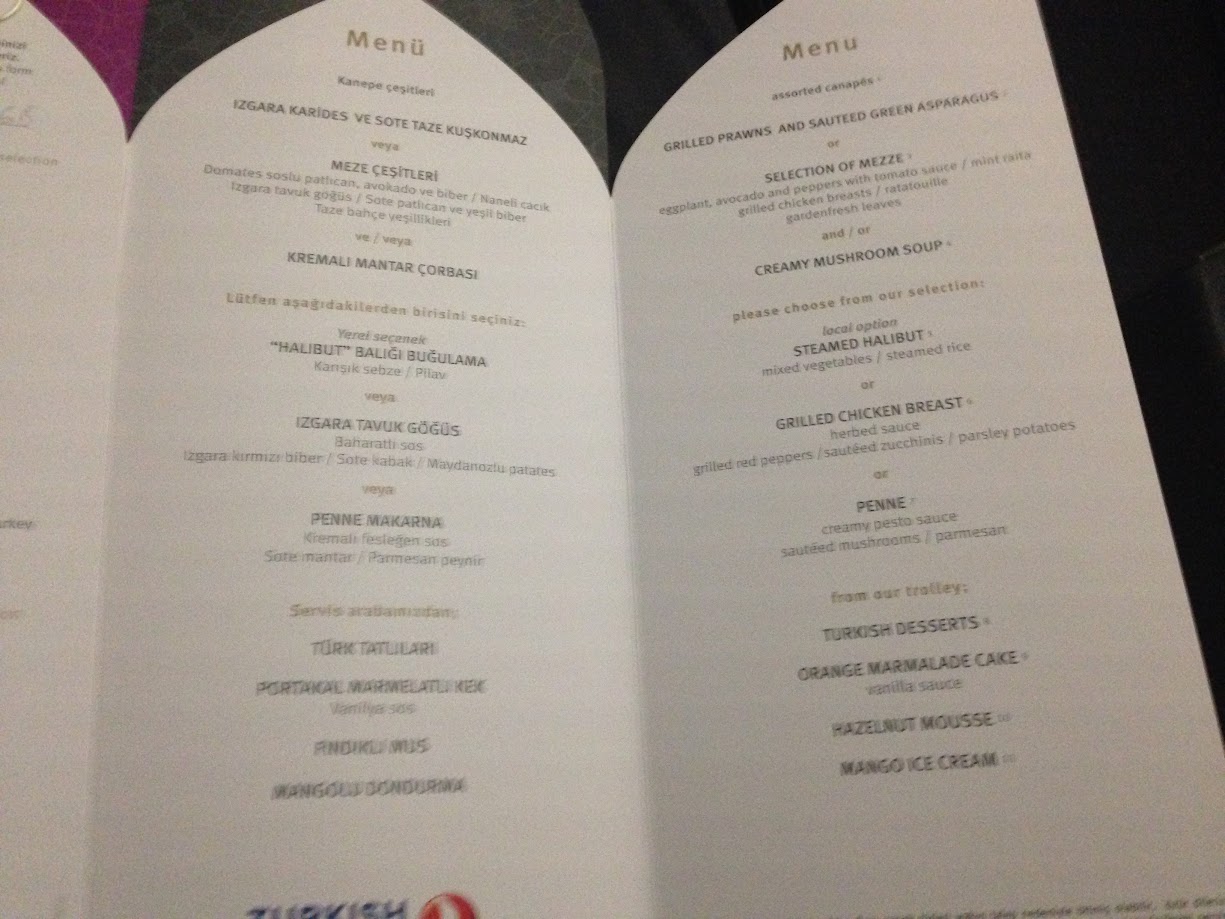 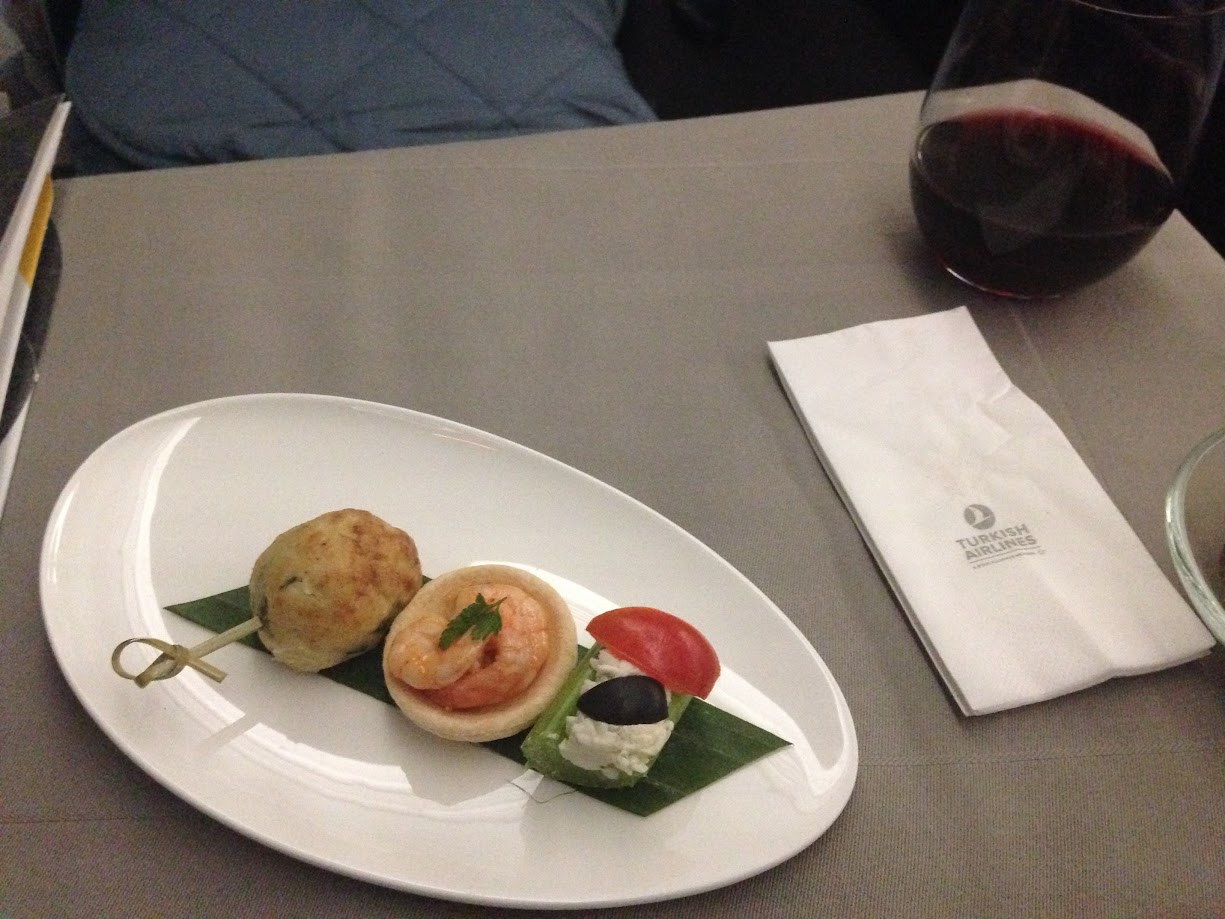 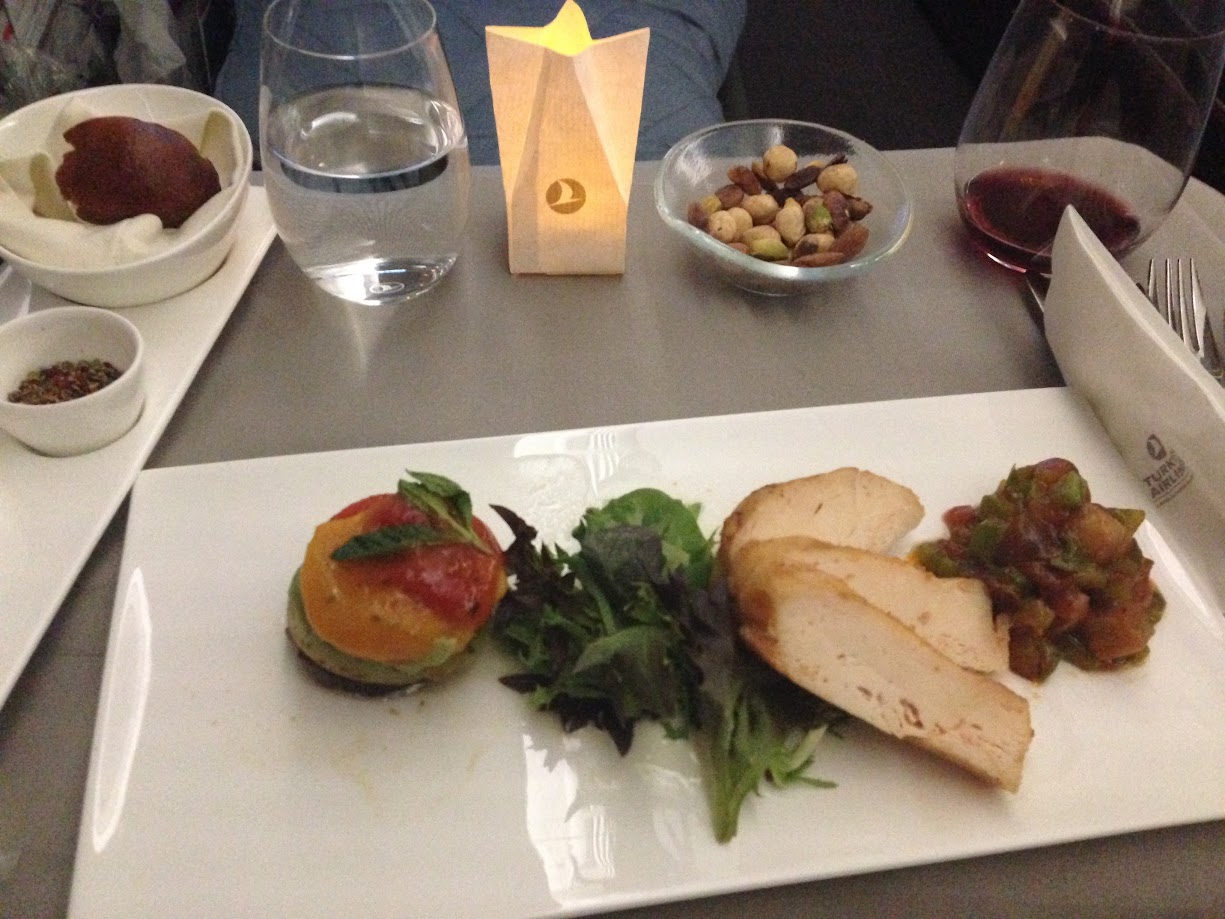 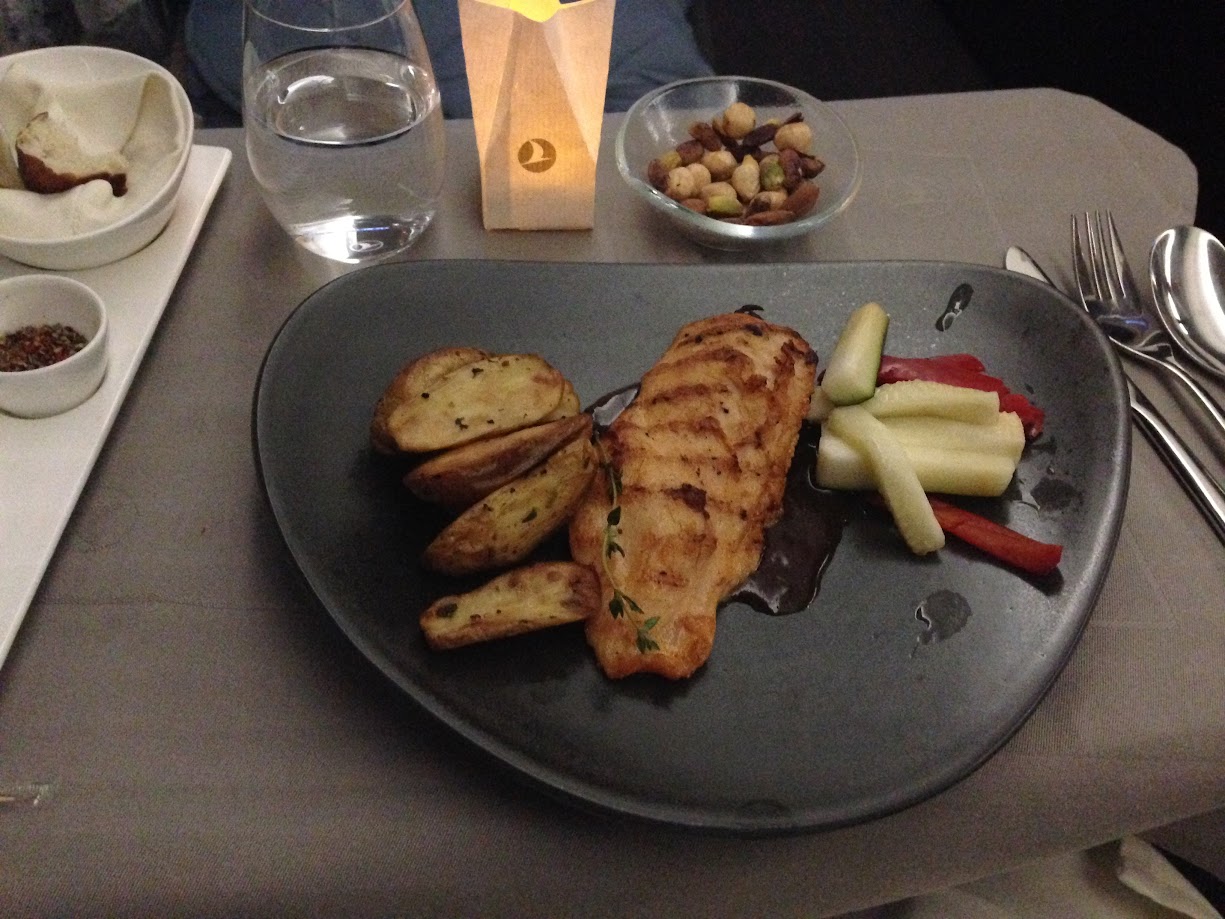 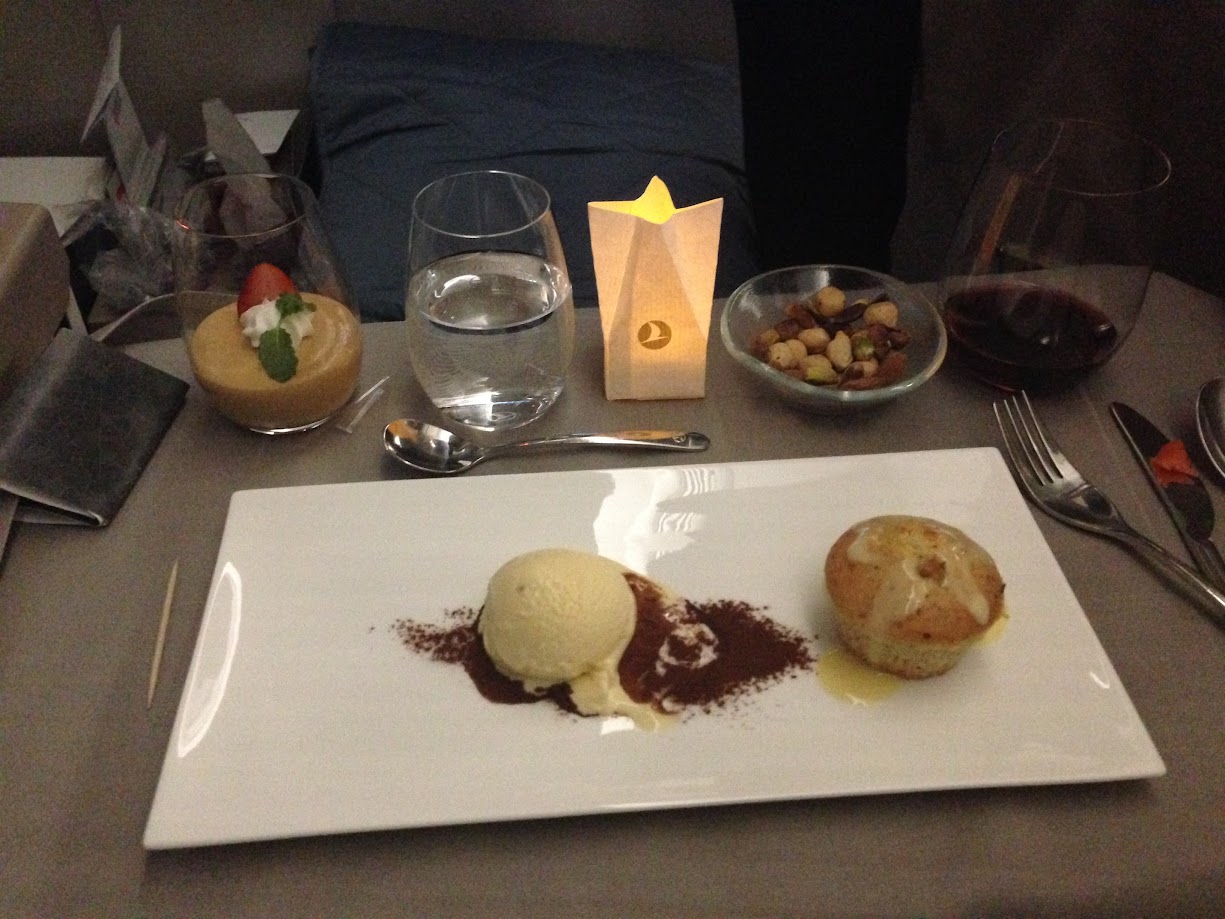 Breakfast… I had the omelette. 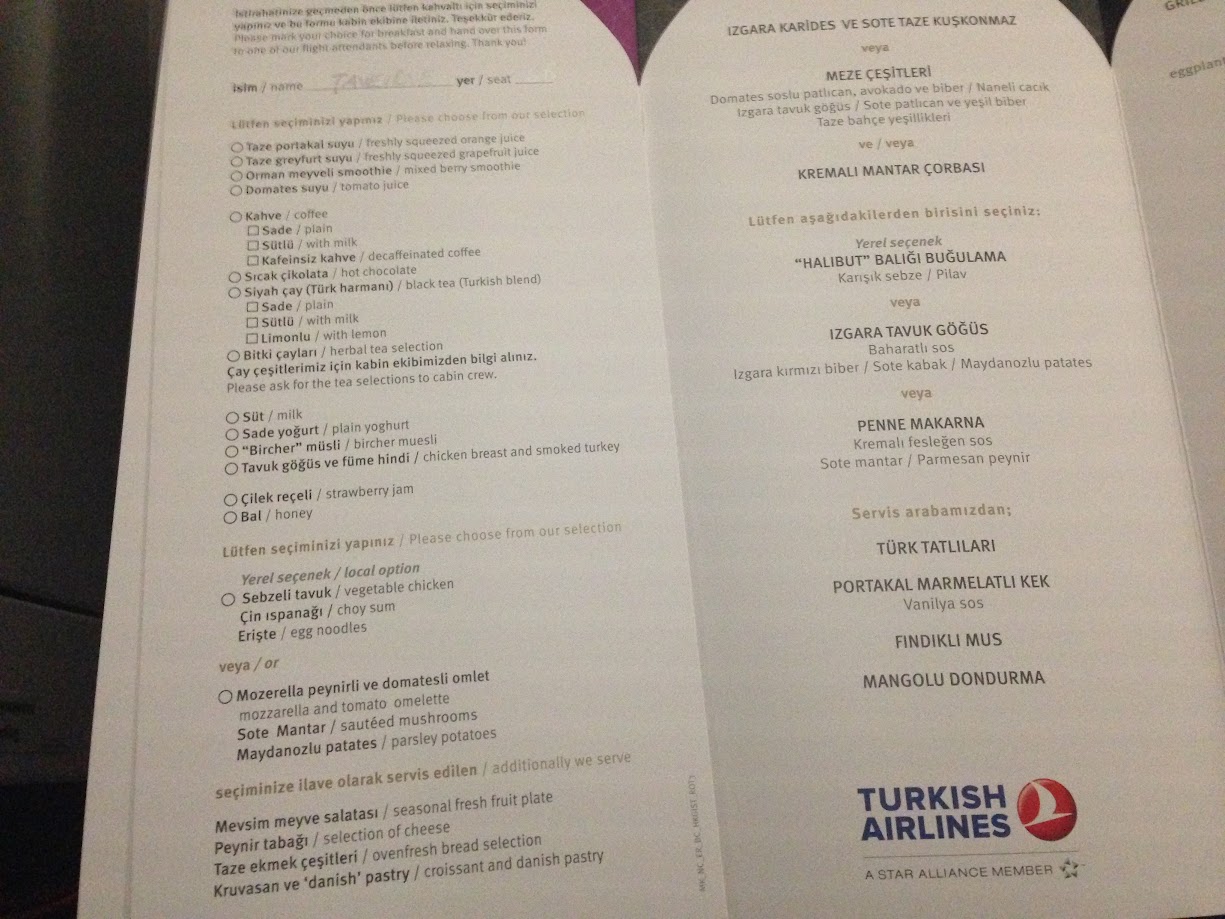 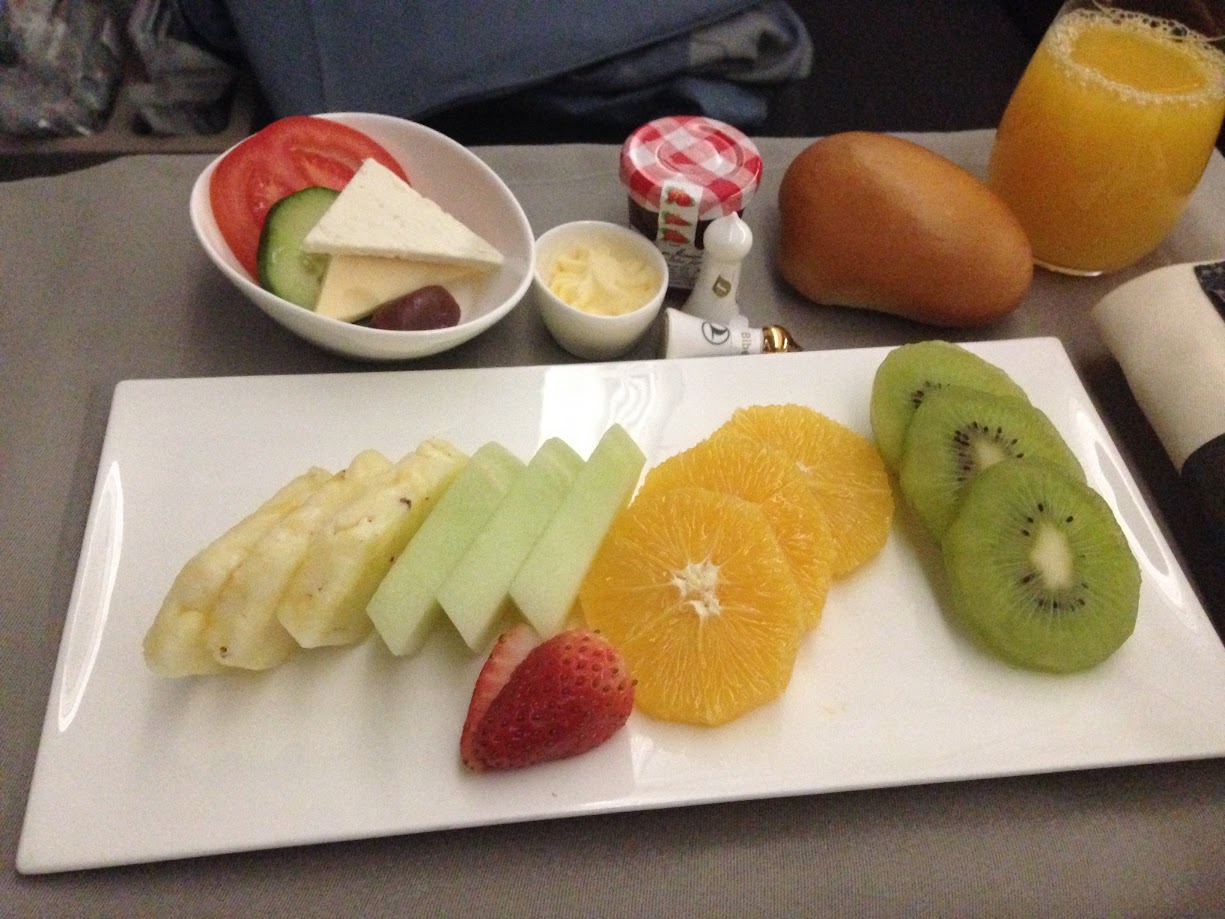 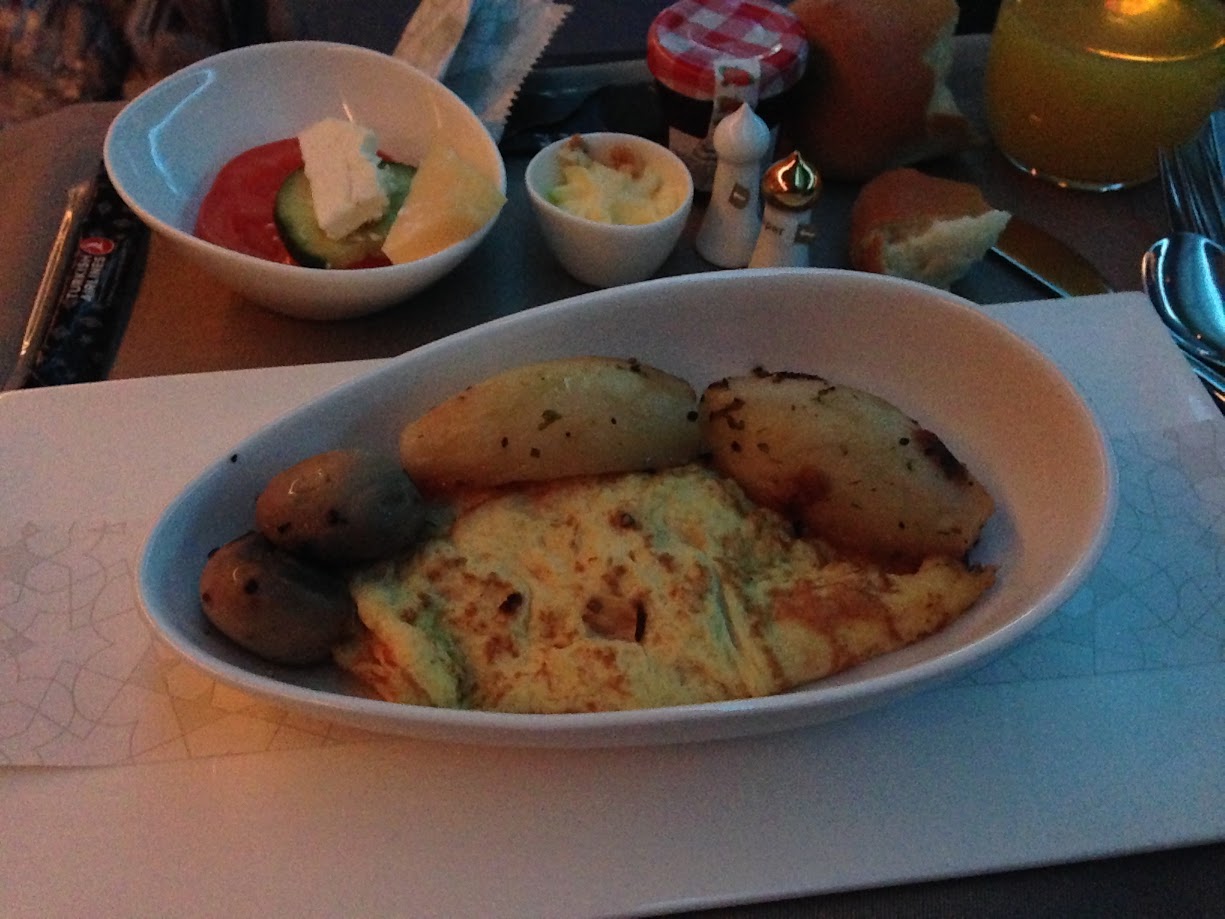 Amenity Bag
I’ve kept most of my amenity bags only so I could ebay them off later once at home, outside of some Cathay Pacific ones I love for my gopro equipment. We’ll see what happens to this one, could be similarly useful… it’s a nice little Cerruti leather bag. The standard stuff was in it, with the lotions and such provided by Institut Karite if you’re into that sort of thing. 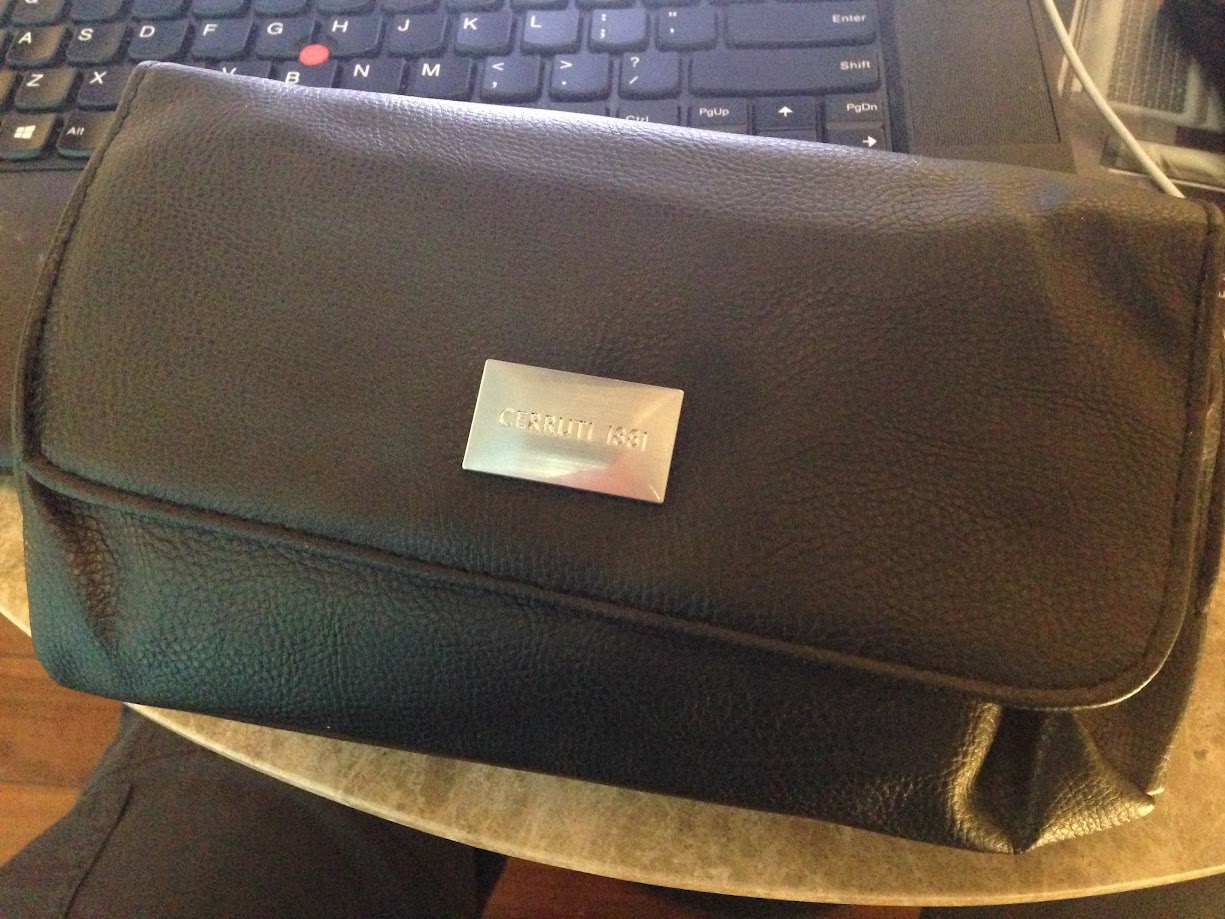 Arrival Lounge
Unfortunately I have a toooooooooon of day to kill at a very long layover here, as I’m actually going to Abu Dhabi – but I arrived at 5am. My flight is at 9pm. It’s also economy so no access for me to the totally amazing Turkish Airlines Lounge. However they did recently introduce a small (much smaller) version of it as an arrivals lounge. I already applied for my Turkish visa, which is multiple entry and they allow a generous 90 days within a 180 day period. This is necessary to have both for getting to the lounge (it is past immigration) as well as coming back later after I leave UAE to stay in Istanbul for a while.

I actually slipped in very early in the morning – nobody was at the desk, and nobody asked for my boarding pass. A couple guys were already in here, as well as a few other people that have come and gone – a couple with some handlers sent to retrieve them. I’m sure most people just want to get on with their day once they land, but this is a nice place for some limited food plus a shower, change, laundry, or ironing if need be. It’s only open until 12:30pm so I’m going to have to come up with something else to do the rest of my wait in this airport, but nice option for me to at least pass some of the day in. 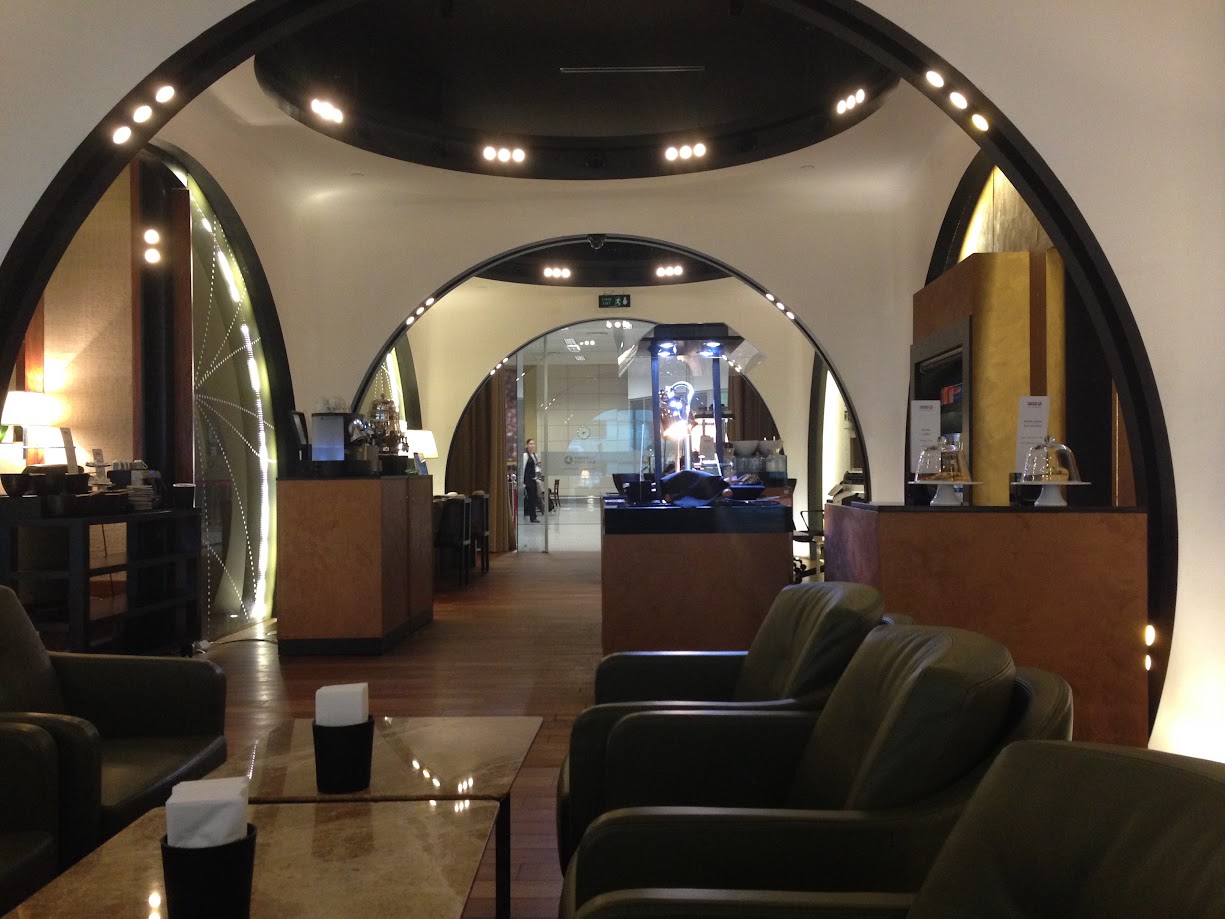