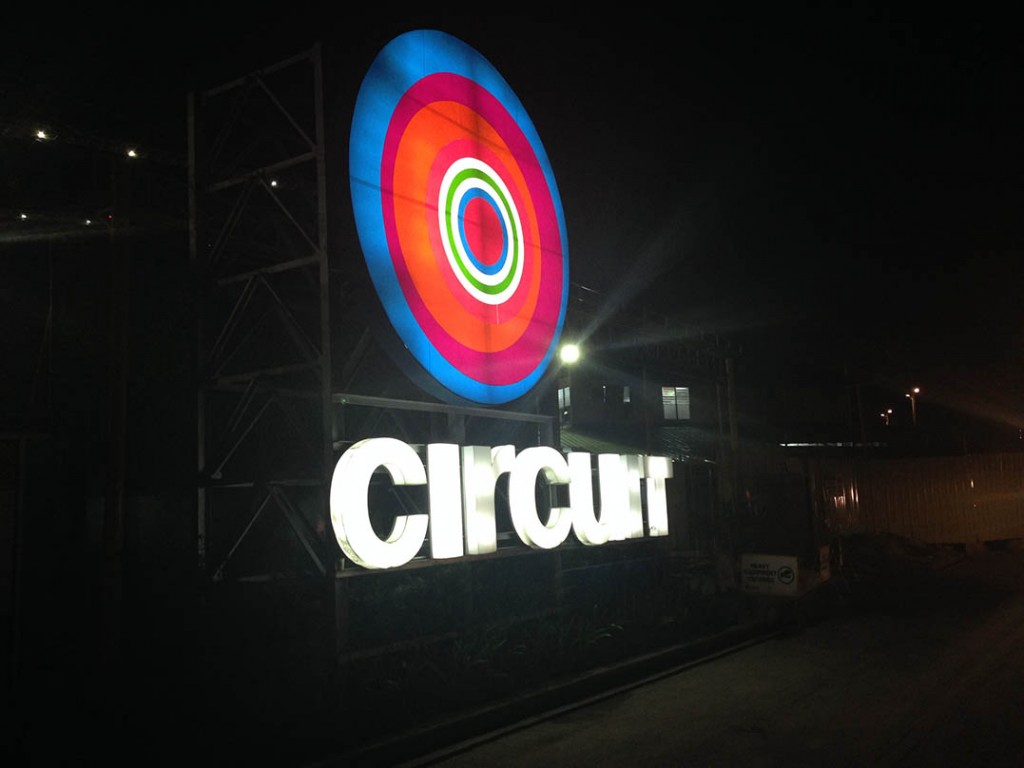 I have a bit of a love/hate relationship with Circuit Makati as well as City Kart Racing here.

What is Circuit Makati?  It’s a new Ayala development on the site of a former horse race track.  Ayala is a monster company that like owns and plans everything and this is one of their developments.  It consists of a large mall, theater, condo buildings, and office space, among other things.  They are currently selling condos as investments, hard to miss while walking around Greenbelt.  I actually checked out the sales pitch out of interest, it seems a decent deal actually.  The way they are purchased here and how short term mortgages are seems pretty defensive against real estate bubbles.  They will be traveling to the US this year and are particularly interested in US citizens due to the current strength of the dollar.

My initial interest was in the free shuttle to the area, even though an Uber from where I’m at in Legazpi Village has proven to be under $3, even under surge pricing.  Although while I’ll pay an extra $200 for a header whose engineering I appreciate but whose utility I will be doubtful to ever leverage, I’m still a cheapass looking for FREE > $2.78. 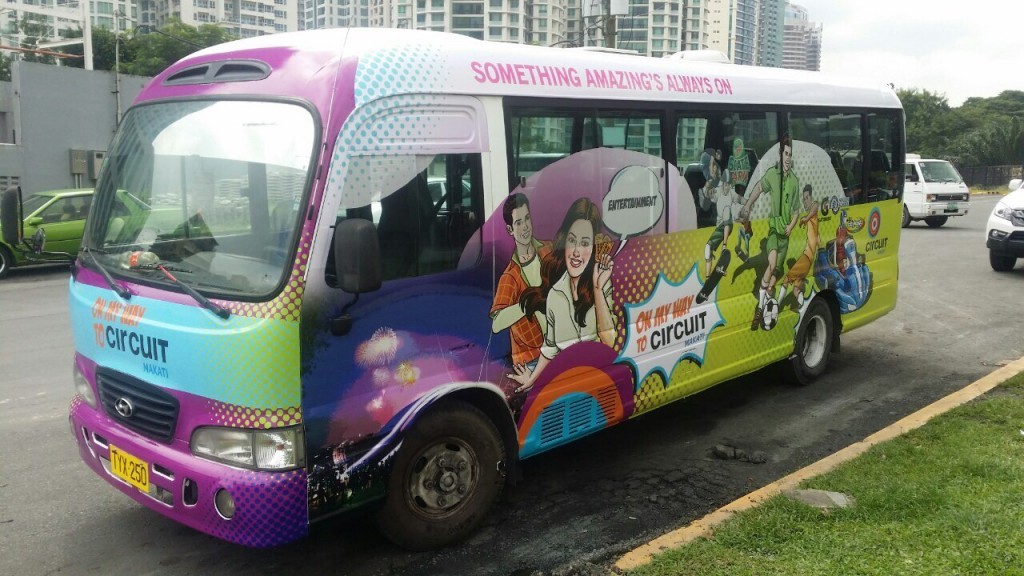 Here’s the shuttle, which supposedly runs free from M-F and 4pm-8pm.  I’ve been here 21 days and I’ve never actually seen it.  The info online is not super helpful – like one stop mentioned is Glorietta; Glorietta is huge.  Another stopped mentioned is Hotel Intercontinental – which has been closed for maintenance for a while.  I stopped by and the guys there had literally no idea what I was talking about.  It goes by Ayala Triangle Park – assumed Ayala with all the jeepney/bus stops – I waited for 45 minutes for it here.  Two security guards had no idea what I was talking about.  The site does not say how many there are, how often they come, how long the trip takes – anything.  Manila is known for very bad traffic – I’m not looking or expecting a German train schedule here – but things like where it actually stops and how long one should wait for it would help, wouldn’t it?  The one day I tried to take it, I spent so much time walking/waiting, and found Ubers to be such a long wait, that I just got pissed and walked to Circuit Makati.  This had me walking up South Ave, at night, west of the Makati Catholic Cemetery up to Circuit Makati.  I was getting some interesting looks – the last time a tall white guy came through there was definitely not just the day before.  Probably not carrying a helmet either.  I’ve since asked my Ubers what they thought about me walking up through there and they just laughed… to be clear I never felt unsafe but I was certainly a bit out of place hoofing it along…  your lady friends are unlikely to choose this journey over a $2.78 Uber.

Anyway.  Onto the karting.

I never used a “FunKart” – you could perhaps justify the slower kart for your first race to get some track familiarity at a lower cost.  After that any experienced karter should be hopping in a ProKart.  You can carry credits on your account, and you do need to buy a license.  The one year membership comes with 1 race. 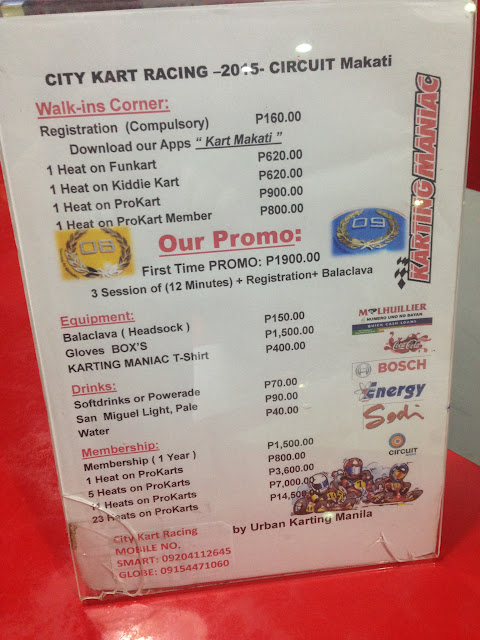 I’ve done the math for you: buying a year membership then one race at a time is a poor way to go, but you exactly breakeven at 7 races vs. no membership.  If you expect to do at least 6 races, then 1-year membership plus a package of 5 is the way to go.  This will save 300 pesos or about $6.66, or a meal, round trip Uber, a beer, or however else you want to measure it (karaoke songs?  2 sisig plates at Glorietta?) 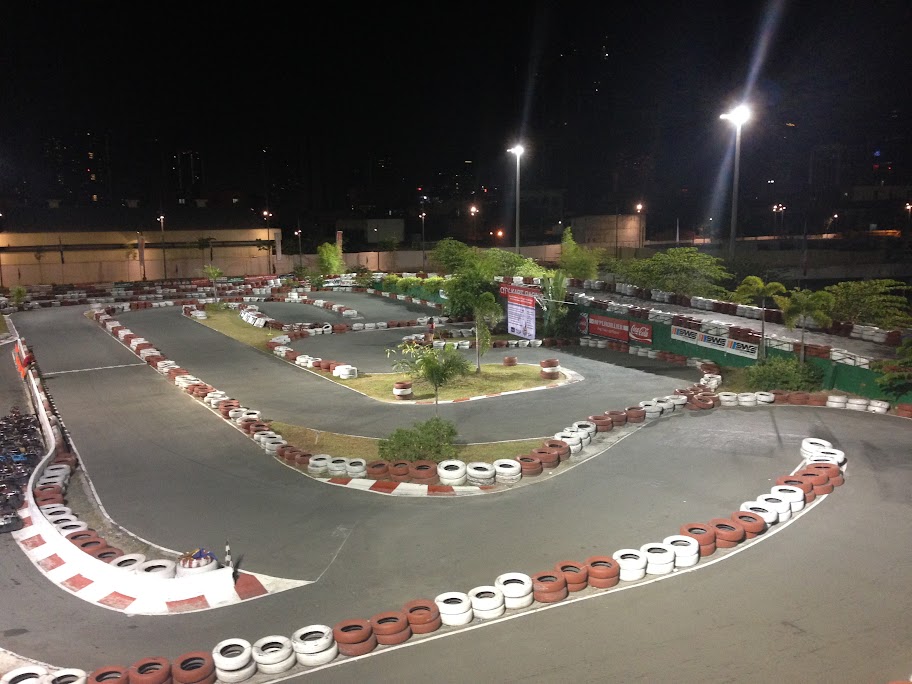 The karting may seem pricey on a per heat basis, but it’s actually pretty good for what you get.  12 minutes of racing and the ProKart gets moving pretty well.  900 pesos is about $18.88 as I write this.  They only take cash – which is unfortunate given how much you could spend here, practically anything else this spendy takes credit cards.  My actual cash conversion rate is more like $20.  On one hand, compared to the US, this seems a pricey heat where you can buy in volume $10-15.  Note some volume breaks here though too; a 5 race package is a $16 race.  A typical indoor race for me at K1 in Chicagoland is 20 laps @ 20 seconds in an electric kart, that’s less than 7 minutes for a short indoor course, best case scenario $10.  Here’s we’ve got 12 minutes of an outdoor course, with karts that scoot faster, over a 700m/0.4mi track that takes a minute to go around and even has some elevation changes.  It’s a pretty fun track. The picture above is still missing big chunks of it, to give you an idea of the size. It’s cool that you can see Makati in the background too, although it’s not coming out the greatest in this night time iphone snap. 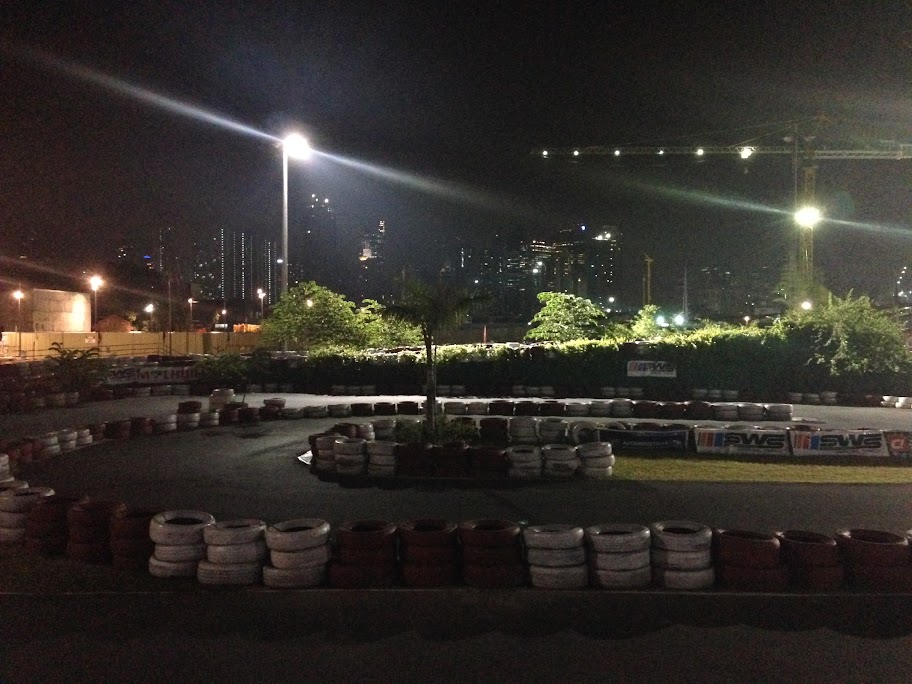 I had a pretty crazy run where every time I went karting, my best lap improved – which is pretty rare anyway, but especially for me. (It’s certainly not a streak I’ve kept up.) I ended up placing pretty well for the year thus far (Jan ’16) and became smart enough to ask them to change my name from Mike to IGoByPlane while I was leaving, although that takes a day to take effect. This time was on my 2nd lap and after I figured out some better things to do – I think I would have beaten it but my kart had problems and the replacement one I was provided was not up to snuff. That being said I had enough karting that evening and it was my last night in the Philippines so I headed out after that. 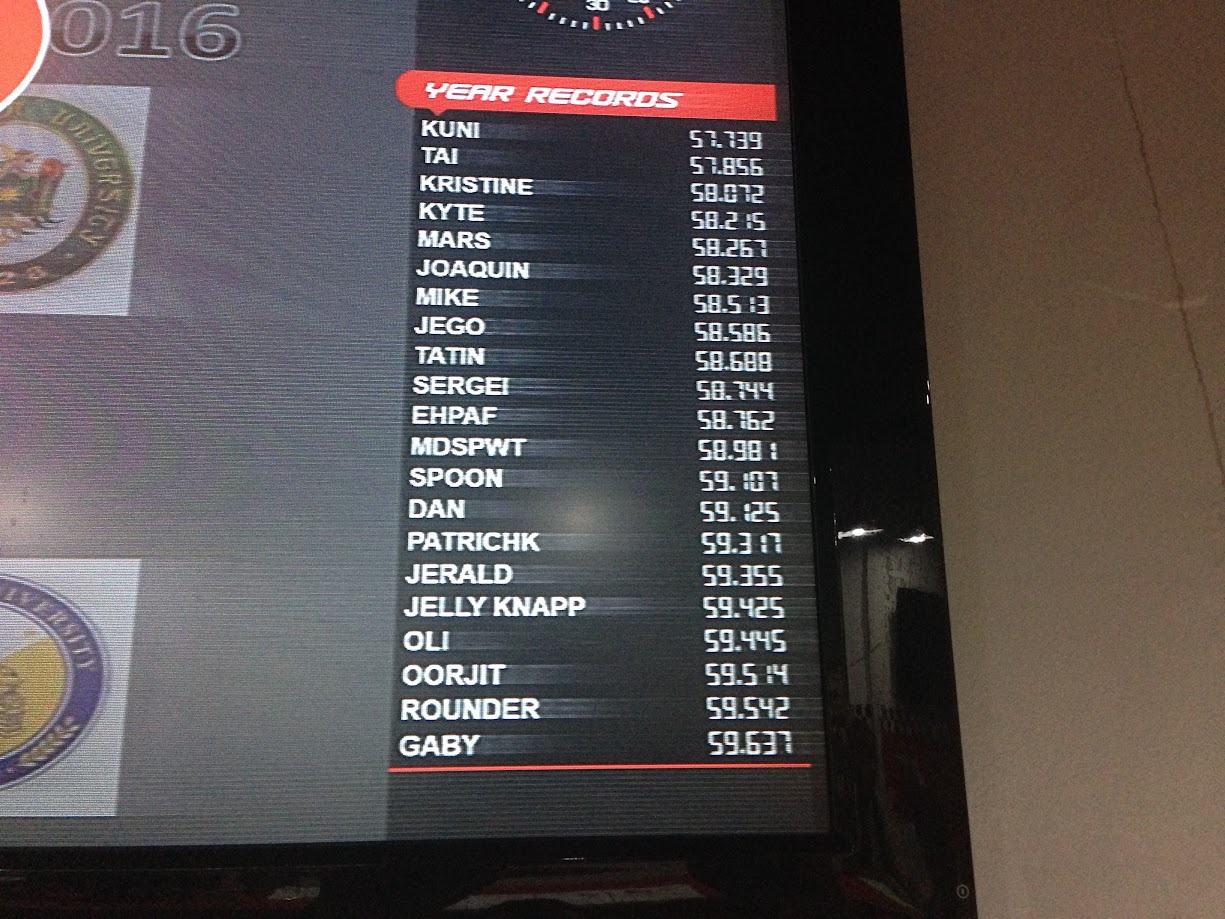 My annoyance with this place really just comes down to not letting me film.  I have a 4k GoPro stabilized with a gimbal for smooth karting video now.  I have a Garmin Virb Elite for 1hz gps data acquisition so I can render a map and speeds on the course.  This was going to be the first karting place where I could really test out this rig – but they don’t allow cameras.  I have spoken to management and communicated through them via the owner and it is simply a hard no, period.  A problem story has gone from a girl’s GoPro falling off and having it scratched to some kind of fantastic story about a GoPro falling off, getting into kart wheels or something, and causing some crazy wreck.

Now to be clear, I’ve never even had to ask at another place, and have karted all around the world and never had a problem using a camera; I think it is totally standard to let people do it.  I was mostly through mounting the crazy gimbal rig when I was told this stuff wasn’t allowed.  Like whaaaat?  Not only that but no amount of reasoning can get a camera on – can’t be allowed, for safety, you see.  I could actually live satisfied with this answer – if they weren’t violating basically every other fundamental safety rule around karting.  These range in seriousness but are real concerns:

Number one and two you can debate their seriousness.  Personally I don’t think they are too big of a deal, although separation of speed/skill groups should for sure be considered on #1 if you are mixing up experienced karters and newbie families.  #3 and #4 are pretty unacceptable anywhere though.  Especially if you are claiming to be the one place so concerned about safety that you won’t let anyone run a properly fastened GoPro – you can’t then turn around and let people out on course with open toed sandals and helmets that don’t fit at all.  A jacked up GoPro or crazy freak GoPro induced accident is nothing compared to the daily risk of serious injury that these both pose. 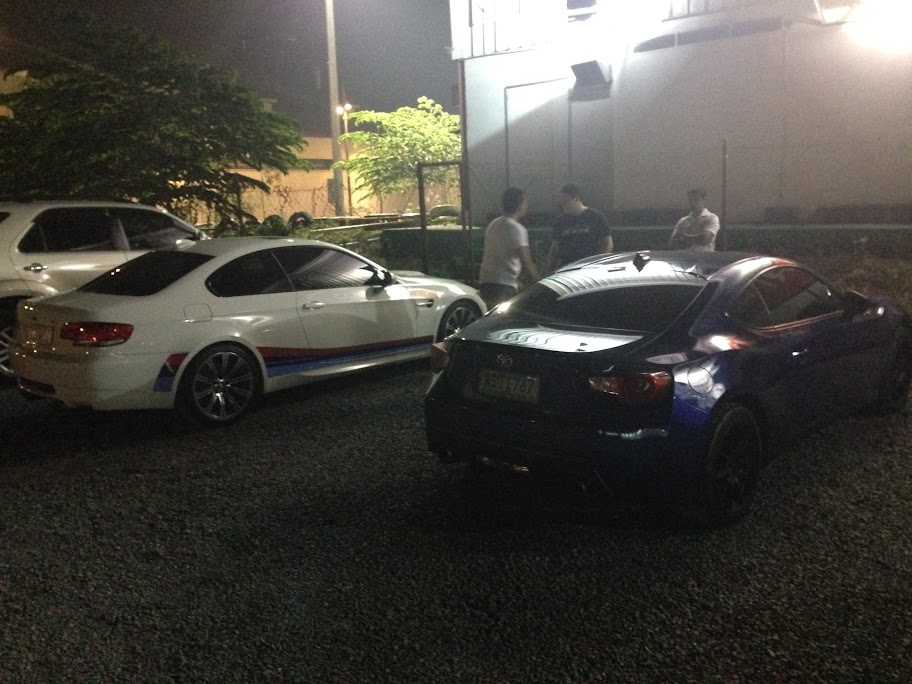 Although I can’t provide any video, I can vouch for the track being pretty fun.  My first visit was with the 86/BRZ Philippines Club so it was a pretty fun introduction.  I tried visiting on weekday nights but it is pretty random if anyone will actually be there, so if flying solo I would recommend shooting for Friday to Sunday evening.  I did all my racing at night when it was cooler; I wonder if the sun might help lower some times during the day?  You’d definitely be running warmer yourself! 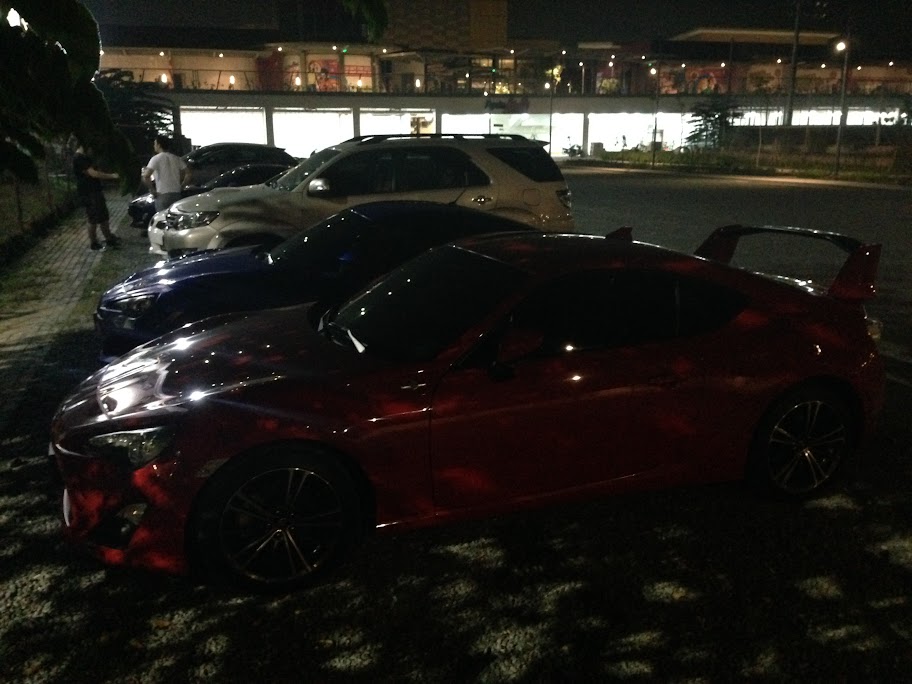 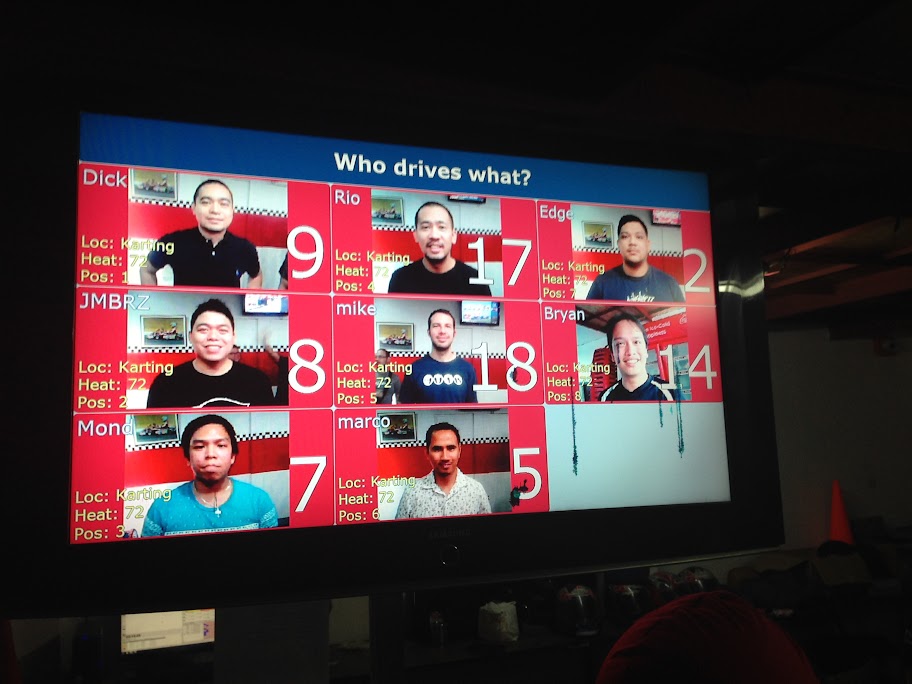