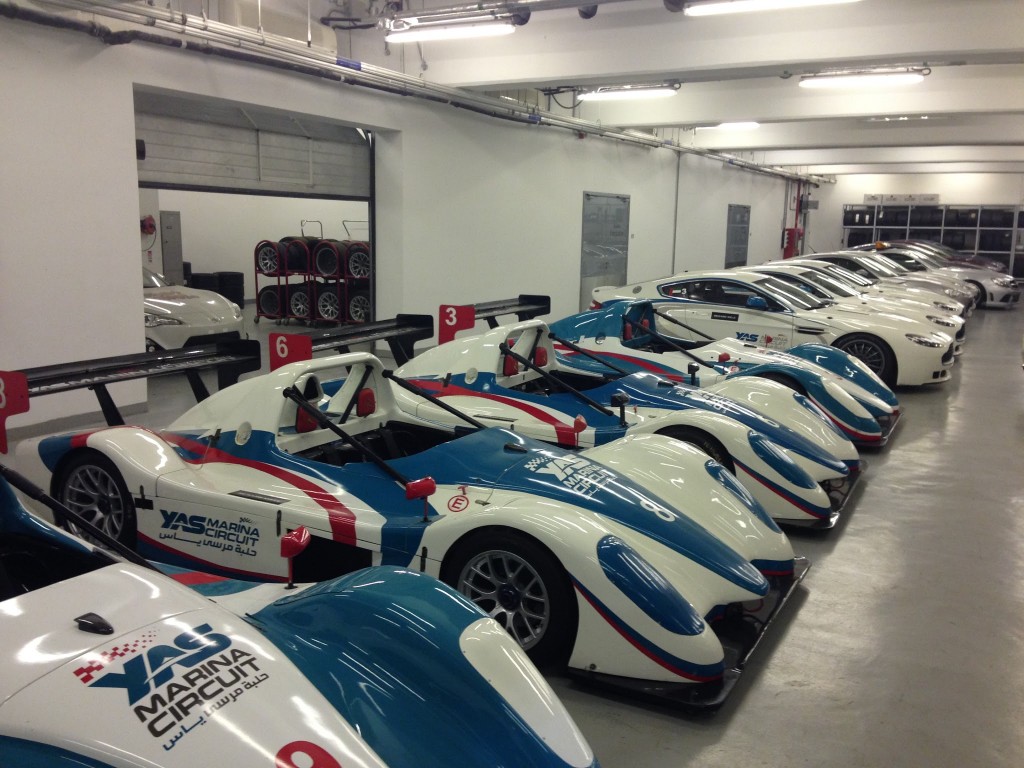 Abu Dhabi has an amazing motorsports complex in Yas Marina Circuit.  It is located near Ferrari World and has a nice arrive and drive kart track. 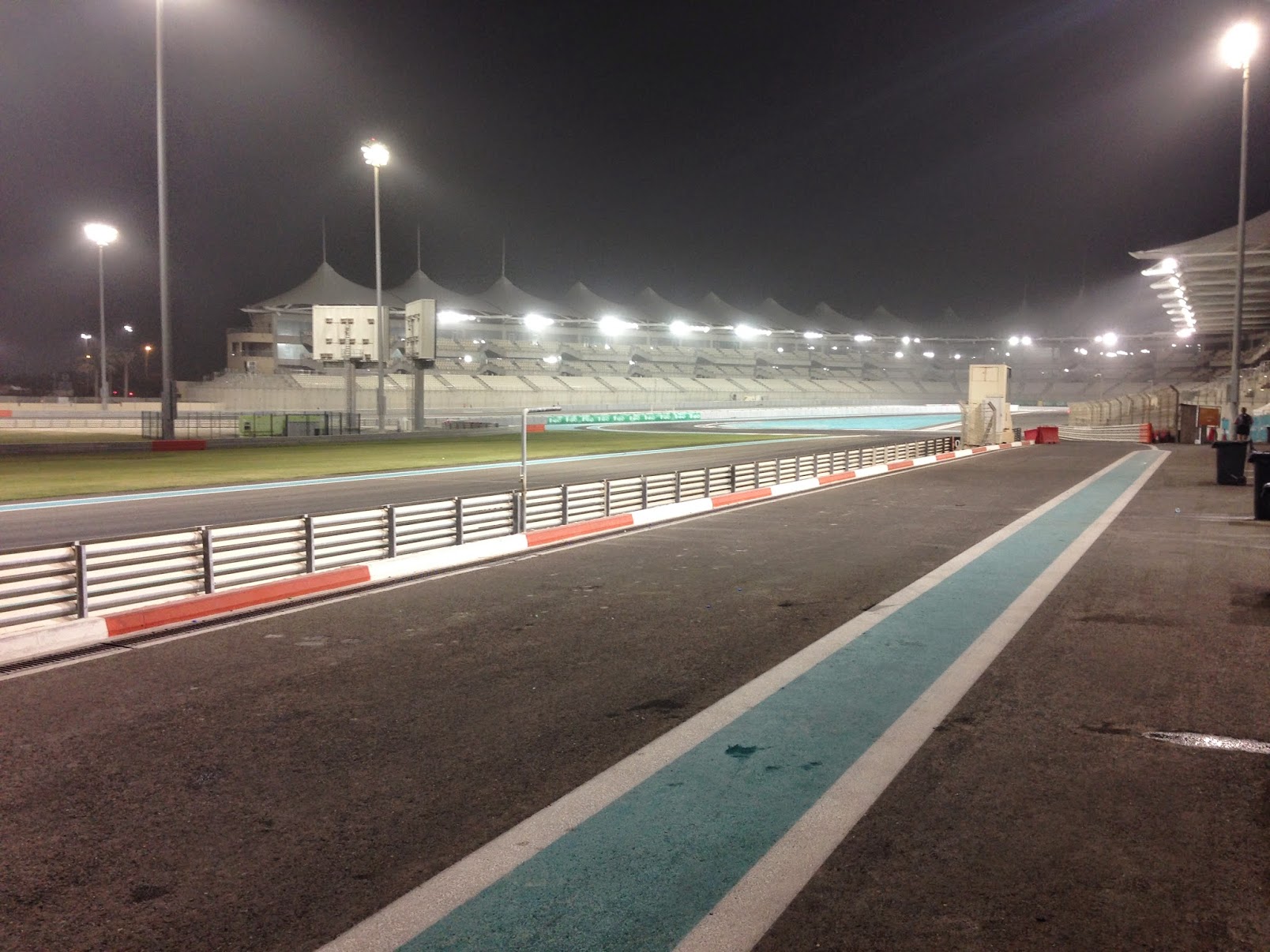 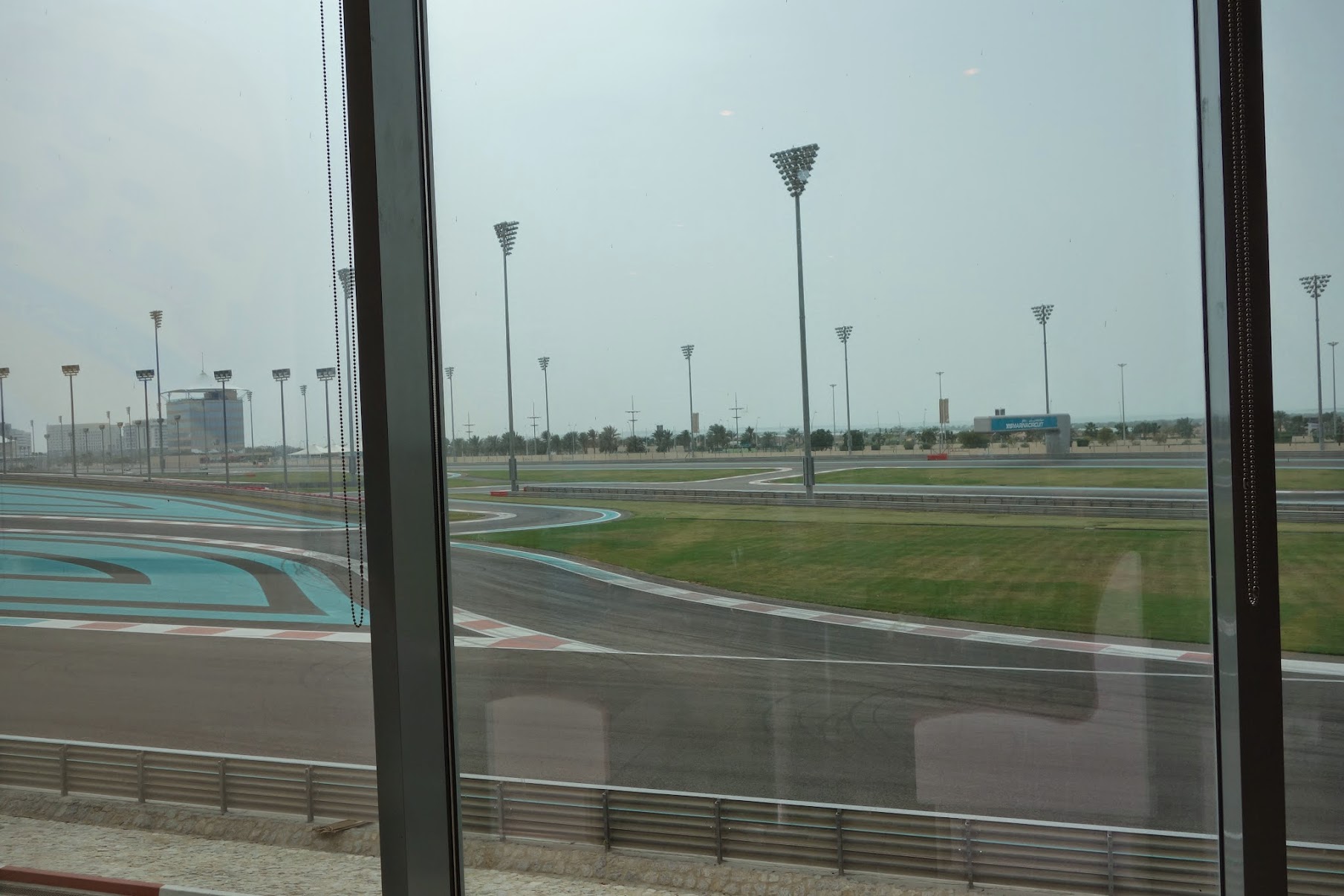 Many programs are available (and changing) on their site – see for details; these include experiences where you drive the car or a professional drives a car with you along for a fun ride.  Programs range from renting US muscle cars for a drag race, drift school in 86s (my car!), and taking some serious cars around the circuit.  These include the Aston Martin GT4s and Radical SSTs pictured above, as well as Formula 3000s. 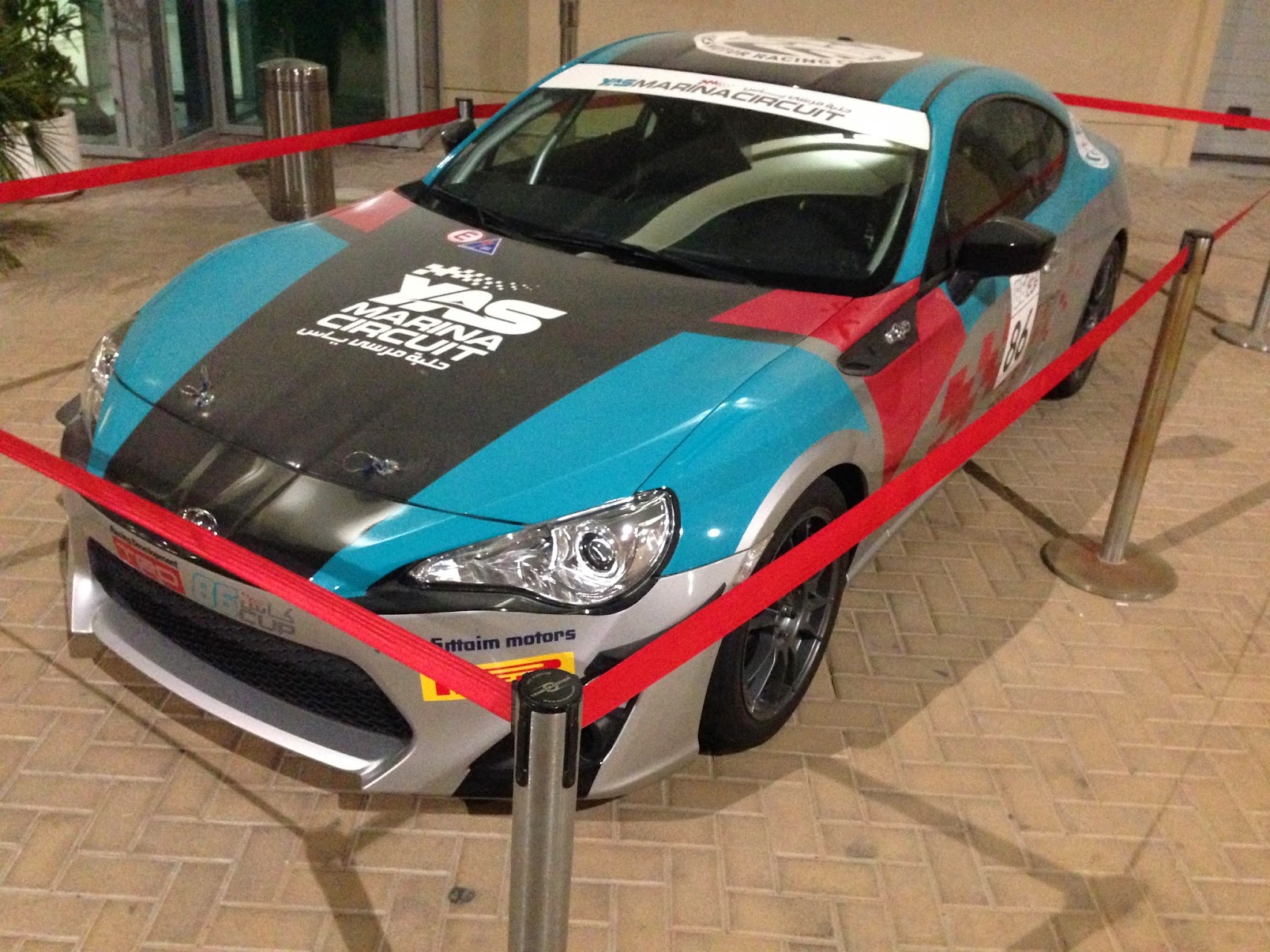 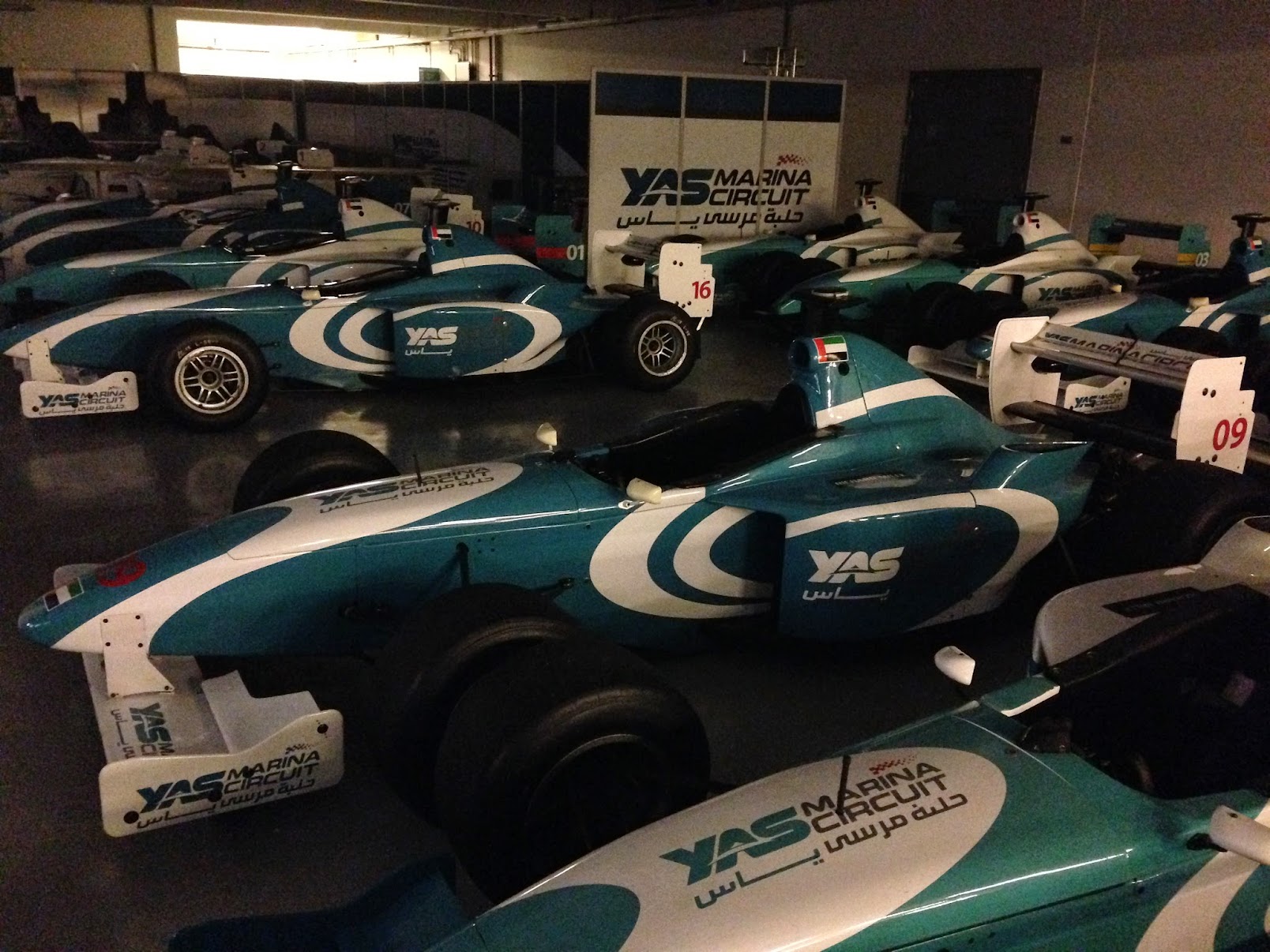 The programs must be signed up for in advance.  I signed up for the Formula 3000 – they sell out reasonably quickly I believe, so you want to have this well in order before you visit.  Per some older videos there are cool night videos of the track, although I only saw day slots available.  This program was 1600 AED.  Insurance costs an additional 200 AED (do it!) and a video of the experience is available for another 200 AED.  Youtube is full of these videos to give an idea of their quality, which at this point is fairly dated.  The audio is good since the mic seems somewhere in the car; although I think the sand/dust has done a number on the camera lens covers over the years, which are not that great of quality apparently anyway (480p) – cool views, just a bit old.  My video is below.  All in all that’s 200 AED – about $550, for about 20 minutes of butt in seat track time at speed.  On one hand this is not inexpensive, on the other, how many places can you go and drive a Formula 3000 on an F1 track?

I don’t have all the specs, but iirc the engine is a 250 bhp V6 Cosworth – more stats available on the website.  The car is light and has a lot of aero on it as well.  It wasn’t stated when I was there, but per some online comments I’m thinking people have been told speeds up to 170 mph are capable by the end of the long straight; which these people seem to believe they were going (although they were most likely not).

Cameras are not allowed to be mounted to any of their equipment; I asked about bringing my own helmet and mounting my own cameras to it.  Online I was told this would be up to the staff there; I provided my exact helmet and certifications but never got a straight answer, so hoping all would be good, I brought it on my trip; which meant carrying it around for 3 weeks in Africa prior to arriving in Abu Dhabi!  It would have been intelligent to have invested in a helmet bag, although I’m not always intelligent. 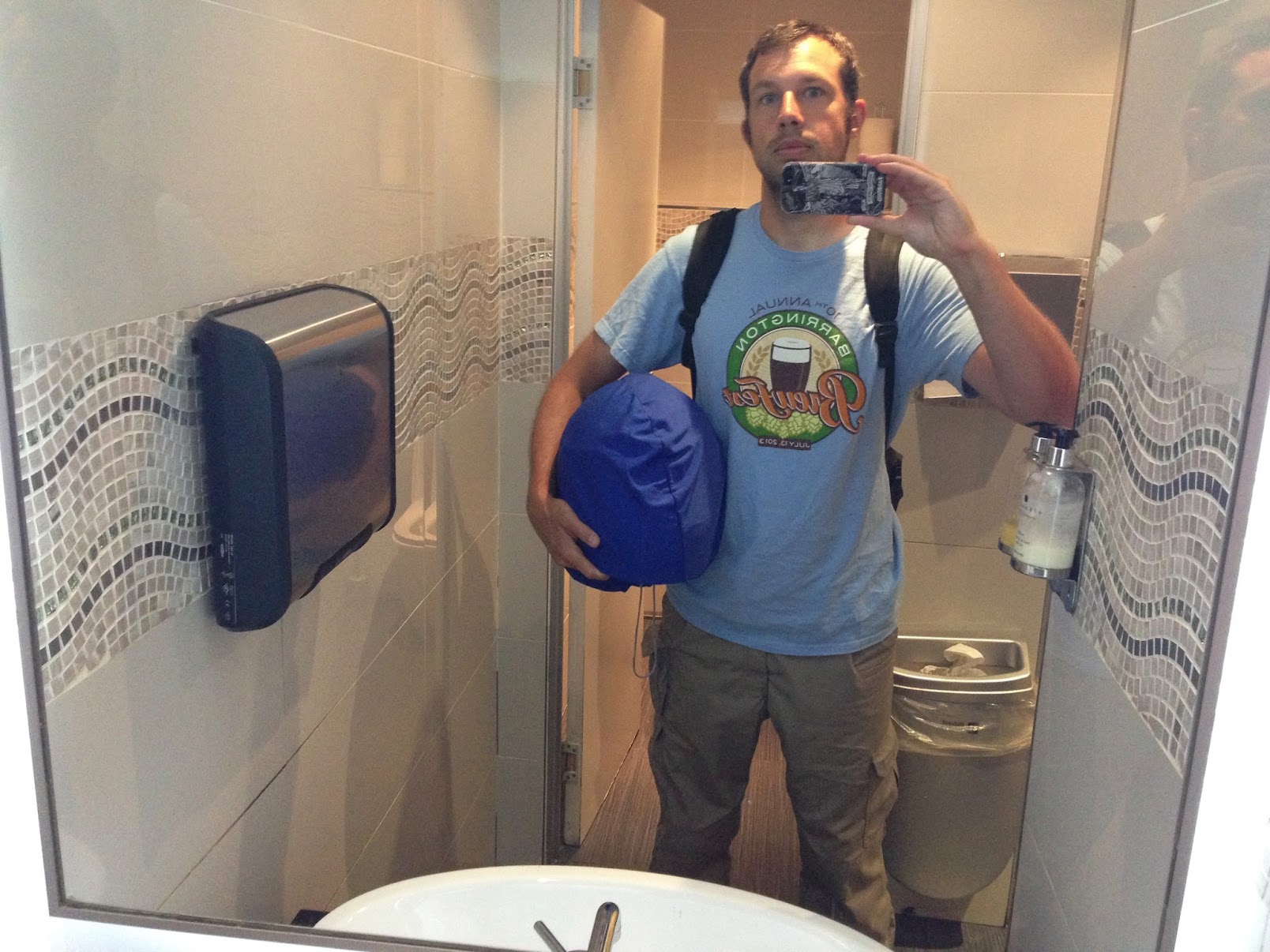 Although Yas Marina Circuit is near Ferrari World, it’s not a walk.  Advise the taxi to enter the circuit at gate 20 and follow the signs to Yas Central.  The experience starts out with changing into a racing suit, and an intro presentation on the track and cars and how to drive them.  My group consisted of 10 people.  Prior experience was asked about, and 6 had never done something like this before, 2 had single seater experience and 1 had rally experience, and I mentioned Chicagoland HPDE experience, although my buddy chatted up some of the people they were there with and after the event I think only one had done something like more than a few laps around a track before.

They broke us into groups, although not along those lines.  The format was lead-follow with instructors and two groups.  A possible third would be created if speed dictated so.  The only passing ever would be full group passing (instructor and followers of group 1 passing group 2) although that never happened.  Within a group, pit in and reordering may take place as needed to have faster drivers up front.  The instructor would start out at a pace and as long as followers could keep up, would keep increasing speed.

After the class, the group sets out in 2 laps in Renault Clio Sports to get familiar with the track.  Lead follow and the drivers can bring a passenger with for this as well.  I am pretty sure my buddy wanted to push the Clio but I just wanted to get familiar with the line and the track!  We were last car out and the line was super sloppy by then, people in front were doing a poor job maintaining it; I was never really sure where the proper line was for the last 2 turns before the pit.  So my advice would be, get ready for the track familiarization laps and try to hop into the first car right behind the instructor. 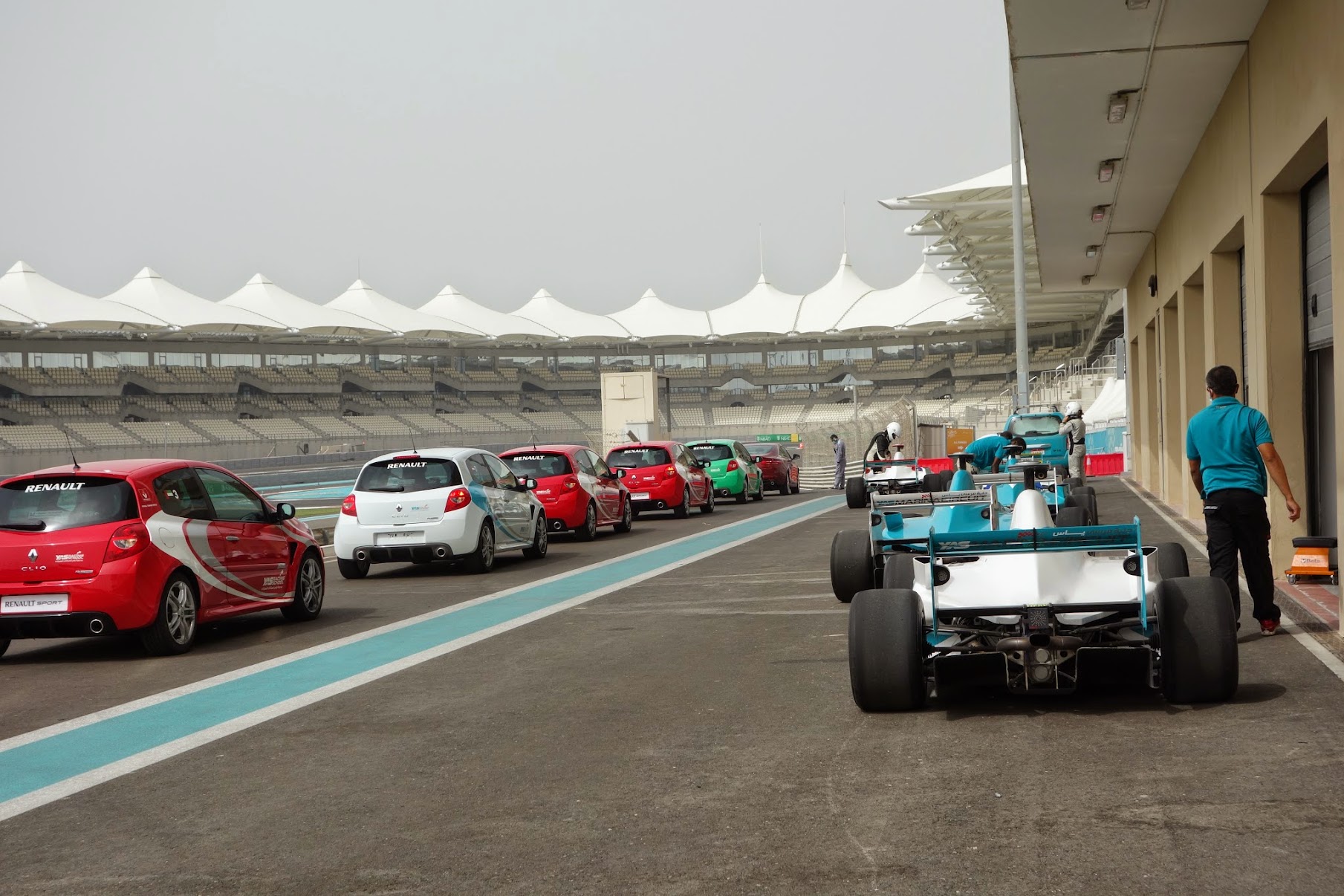 I asked about the helmet and cameras with the guy behind the front desk when I came in; he said they were fine.  I asked the guy who led the class; he said the same thing.  Once out there though and in the car, nobody said anything about the helmet but they did call in and check on the cameras.  I was worried I’d have to hurriedly take them off but thankfully they were ok.  I had a Garmin Virb Elite on, mostly just so I could record data from the event.  It records 1 hz GPS data.  I also had a GoPro 4 Black on, in the 2.7k 48 fps mode.  It doesn’t all translate through to the final youtube product, 1440p 30 fps at about 1/3 the bitrate, but the video still came out well and much better than the one Yas sells (which I still purchased and does have better audio, as noted before). 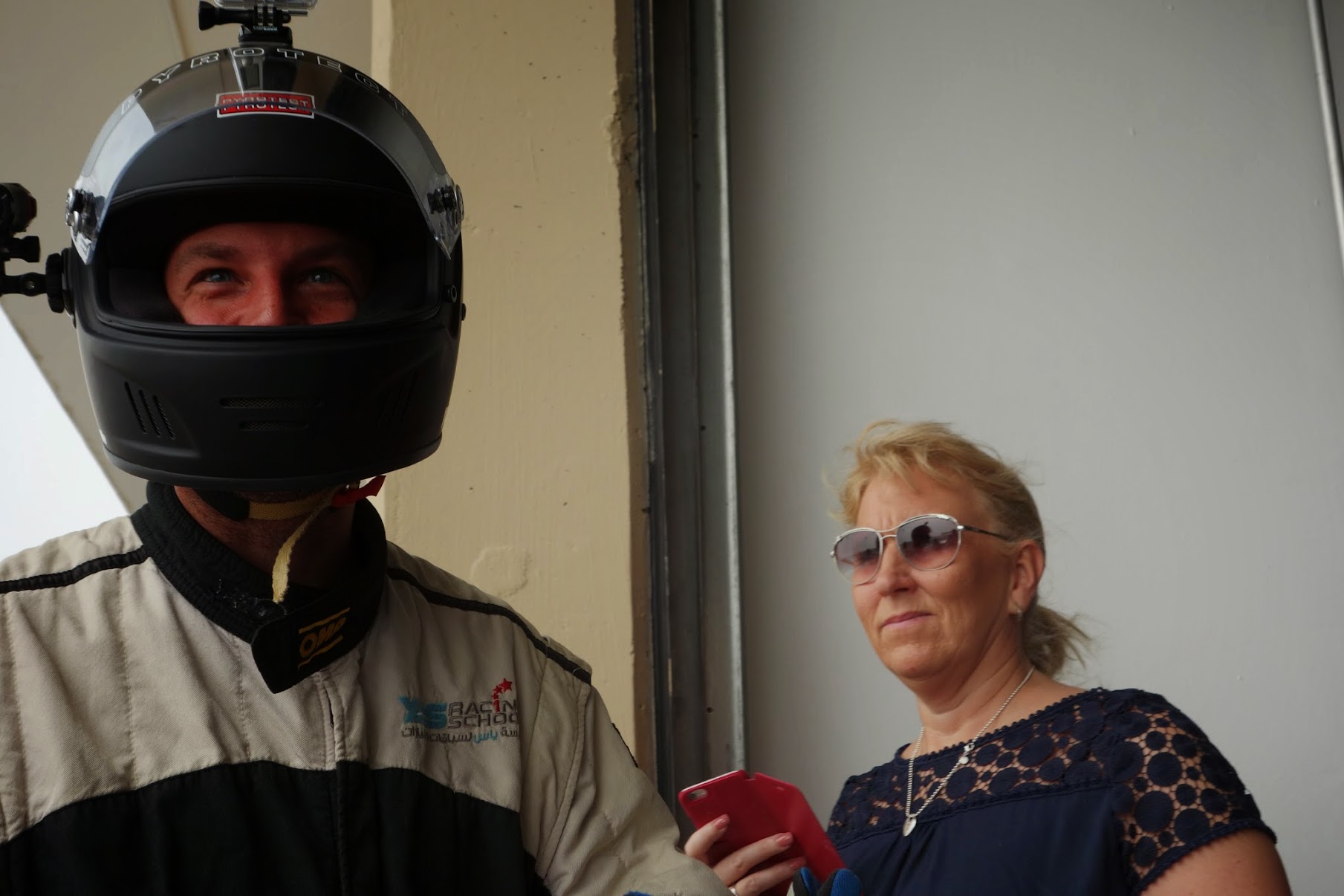 This was my first time driving a single seater – quite a different experience sitting down with legs outstretched.  I came to find out my chunky walking shoes, which I like for HPDE heel-toe’ing, were way to chunky in the car – my left foot was running into the right making for really sloppy pedal pushing.  I was quite worried as we were getting ready to go out – I mentioned it to the guys strapping people in and thankfully they had some racing shoes I could borrow.  Everyone else either had already figured this out or brought their own or had skinnier shoes, as I seemed to be the only one that had to run out and do this.  In quite a rush! 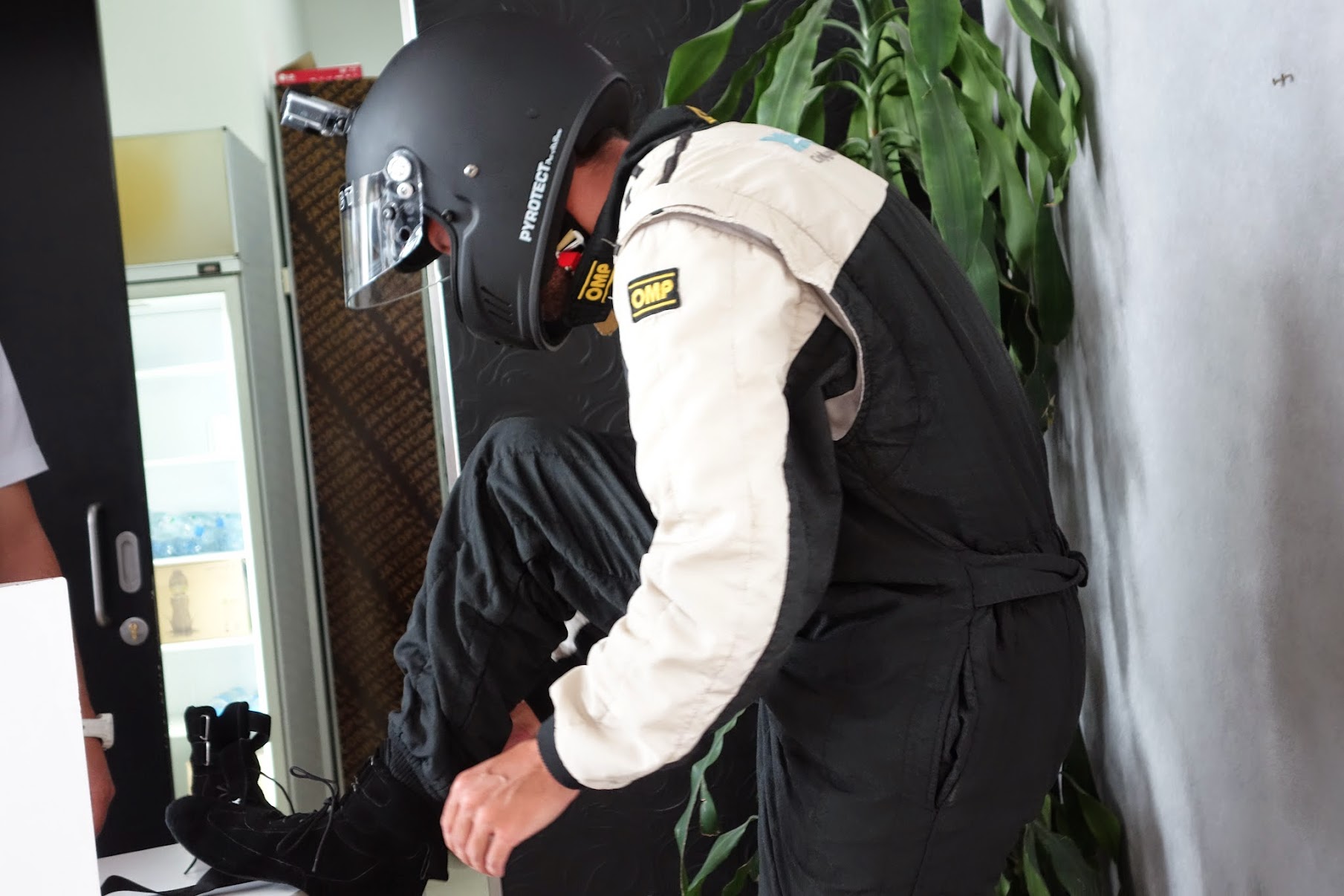 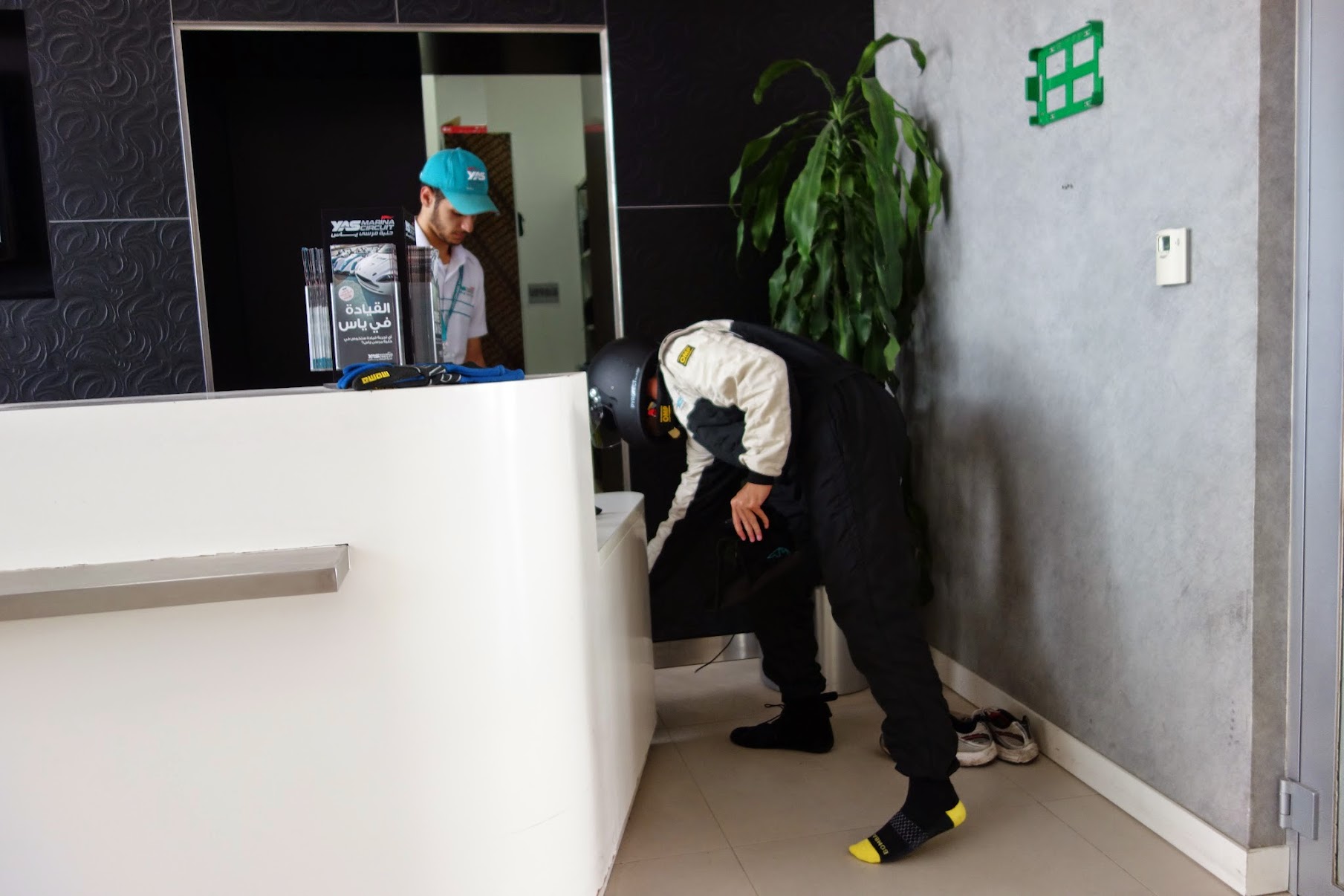 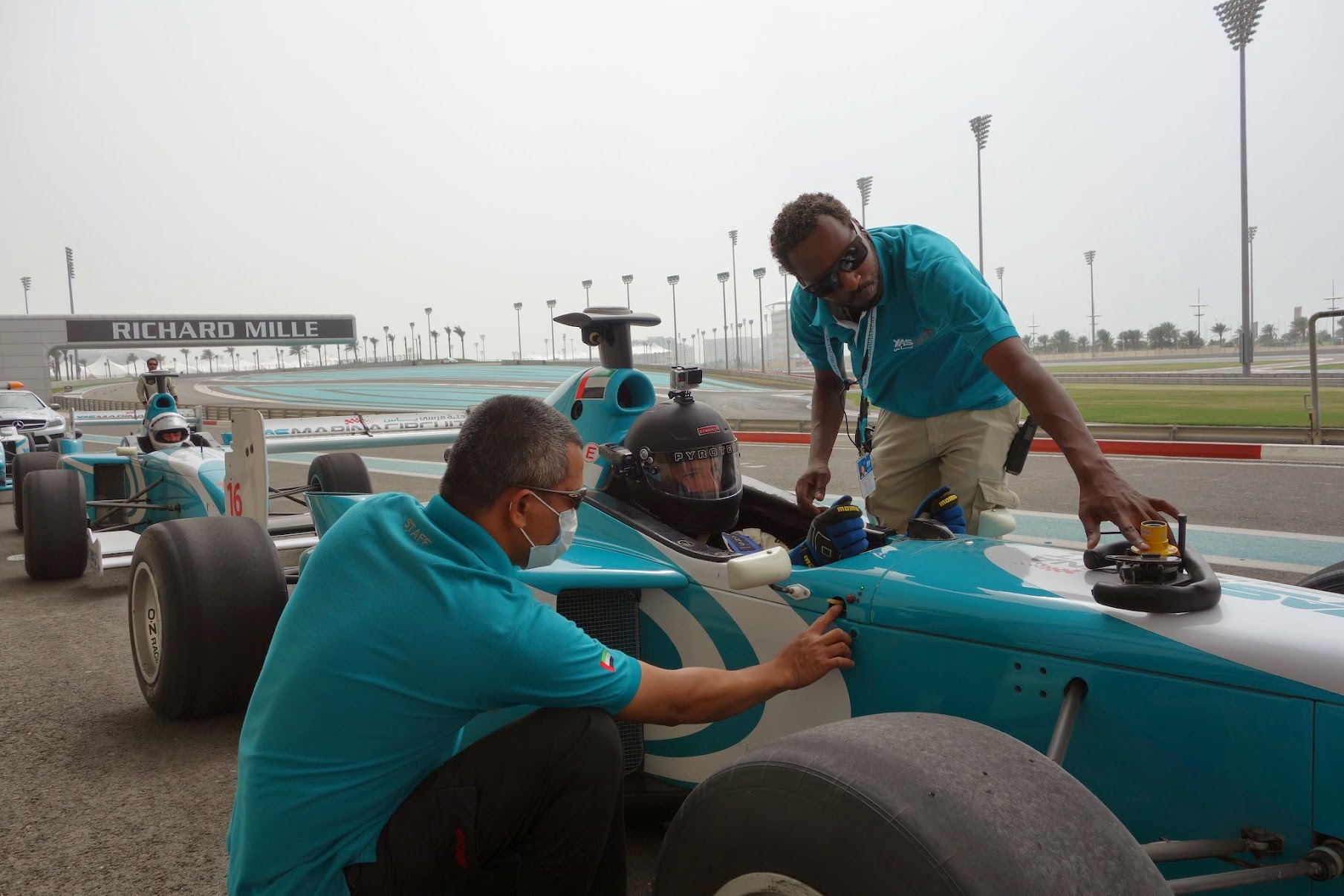 I ended up being in the position behind the instructor in the “fast” group, the ideal position to be in as it is in theory the best performing student.  However I wish I pushed it harder, as I at times held off trying to keep the 5+ car pacing, although I think that was much more important behind other students vs. the instructor.  I think he hardly ever even spent time braking, and I definitely could have pushed harder!  Then again this was my first time in one of these cars, I was gaining familiarity with it and the track as well, so safer than sorry is usually a better place to be.  In the video you can see us coasting slowly along the straight a bit unfortunately rather than starting to blast down it; this was time provided for other followers in our group to catch up and collect us before going down the straight again.

I would absolutely do this event again!  I think I could easily drop 10 seconds off my best lap just being more familiar with everything now and working to push the instructor harder.  The braking points seem pretty conservative as well.  The two red cones mark their start, the yellow the turn-in, and the green the apex point of the turns.  It was a ton of fun and I highly recommend it as well as pursuing the other programs offered here.  The first video is my edited one of the experience with my cameras and data, the second the one from Yas Marina, of the entire recorded experience (so you can see me kill it twice!  I wasn’t the only one…)

A very important note on the cameras — !  The one on top was not a good idea.  Yas probably should not have let me run the GoPro that way.  The thing is just a big air dam – it might be possible to tell in the Yas video, if it was higher quality it would be quite clear – I’m actually fighting this thing pretty well to keep my face forward and head down and steady.  It’s putting some pretty legitimate pressure on my helmet and pushing it backwards, especially at higher speeds.  The Garmin device is a lot more aerodynamic – I’m not sure if it was really bothering me any if at all, but the GoPro clearly was.  Perhaps the chin area of the helmet would work better.  Not sure.  The newest Sony action cam has much better video quality than this Garmin and logs data as well, perhaps a good solution for a side mount as it is still much more aerodynamic than the GoPro.