I signed up for a LivingSocial some time ago to do the Shedd Trainer for a Day program.  It’s part of the Extraordinary Experiences programs at the Shedd Aquarium.  It’s a 4 hour program for $350/person ($325 for members) and is the priciest one they offer, outside of the marriage proposal one.  The LivingSocial was half off, so my cost was $350 for two people to do the program.

It was a little challenging to schedule originally as it was tough in the beginning to get ahold of a person, they didn’t seem to do e-mail much with the program and availability was spotty.  I suspect they didn’t actually sell that many experiences at the list price point but know they sold a lot when the deal came out and there’s simply only so many people that can do this kind of program in a weekend.  I actually bought it in 2012.  When I recently scheduled and did this in 2014, it was much easier and I was able to handle a lot of it over e-mail.

Technically I’m not sure if Shedd was required to extend me the deal so long; they stated they would for calendar year 2013 simply because they were aware of the constraints above, but thankfully they let me carry my voucher over into 2014 as well.  I had been meaning to do with with a friend from Texas which made it even more or a challenge to schedule a time to do the experience.  I ended up going with a local friend instead and went this May.

I think it’s probably fairly dynamic – you do spend the day with a trainer, truly behind the scenes.  Every day is different and the trainers are different as well, so I bet no experience is exactly alike another.  A video of one experience from ABC is below:

My experience had less “work” – no scrubbing, no food prep, although we did take a look into the prep area and chat about it a bit.  In the bit above, Mark got to go into the penguin exhibit – we did not.  Primarily I believe because the penguins were mating, so they were very protective, and quite bitey.  One of the trainers working with them did bring one into the hall for us to watch waddle around, and she pet and played with him a bit, although advised we didn’t try and touch since the bites are no fun.

Around 3:30 in the clip above the trainer talks about the symbol the whale has; pretty much all the animals had a symbol representing them and we would help the trainers with some of these during the feeding sessions.  For example, we would go out into the public area and I would hold up a “wrong” decoy symbol and my friend would hold up the symbol for one of the sea otters, up against the glass of the exhibit.  The trainer would then give the signal to go find your symbol, and the otter had to swim up and touch the correct one to come back and get rewarded with some fish.  We did this same exercise with a sea lion, who was pretty funny to do it with.  The sea otters basically look like they have ADHD and are very fidgety, while the sea lion was just a big blob dog who would run up to the symbol I was holding at the glass and just have this frozen blank stare at me while he sat there pointing.  He wouldn’t release until the trainer blew her whistle.

Besides penguins, sea otters and sea lions, we also saw some other animals being trained that occasionally are in shows or have been in past shows although aren’t in any today.  This included some of the dogs they have there, as well as birds of prey – hawks and owls.  They were pretty cool to see.

We also got to get up pretty close with the dolphins and see some trainers and volunteers interact with them, which was cool to see.  The most fun experience was with the beluga whales as they were the only ones we actually got to touch and really interact with a lot more.  We were able to issue them commands, like spit, and reach up and touch my hand; we were also able to touch them, pretty much all over.  We felt their melon, their sides, tummy, top and dorsal ridge, as well as their tongue which they are apparently real big fans of.  Most fun part! 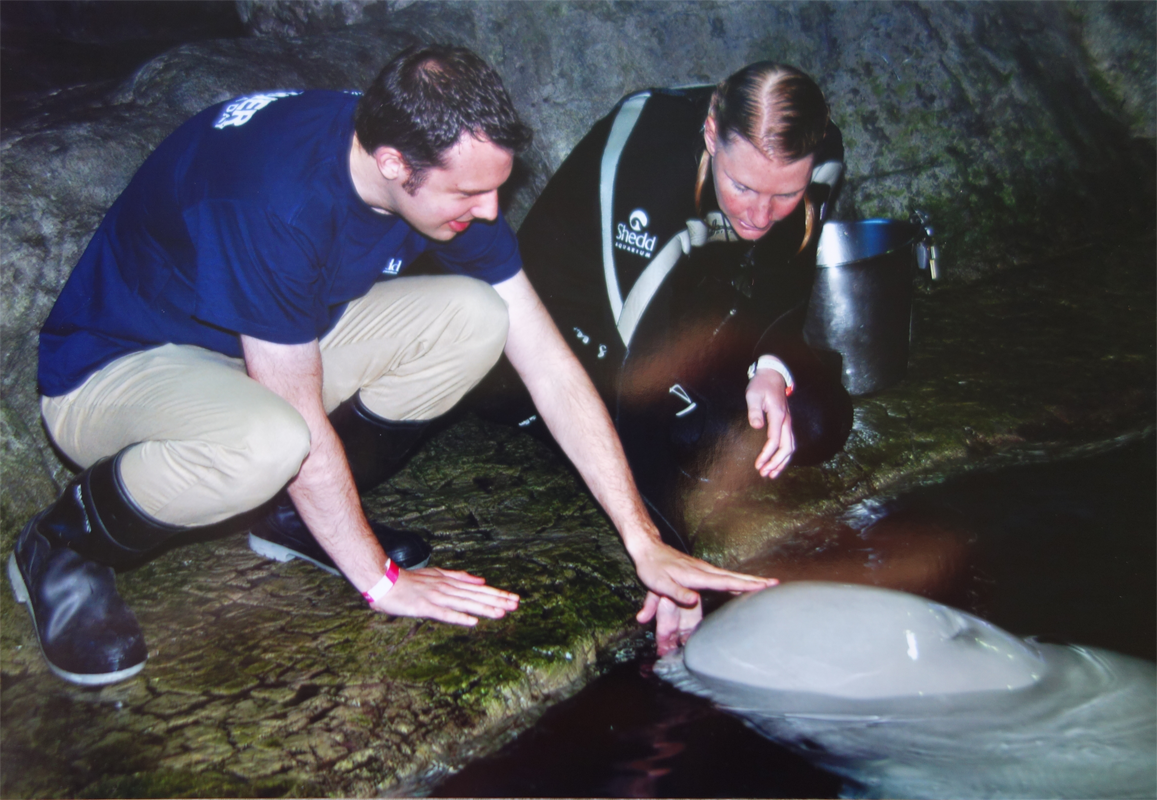 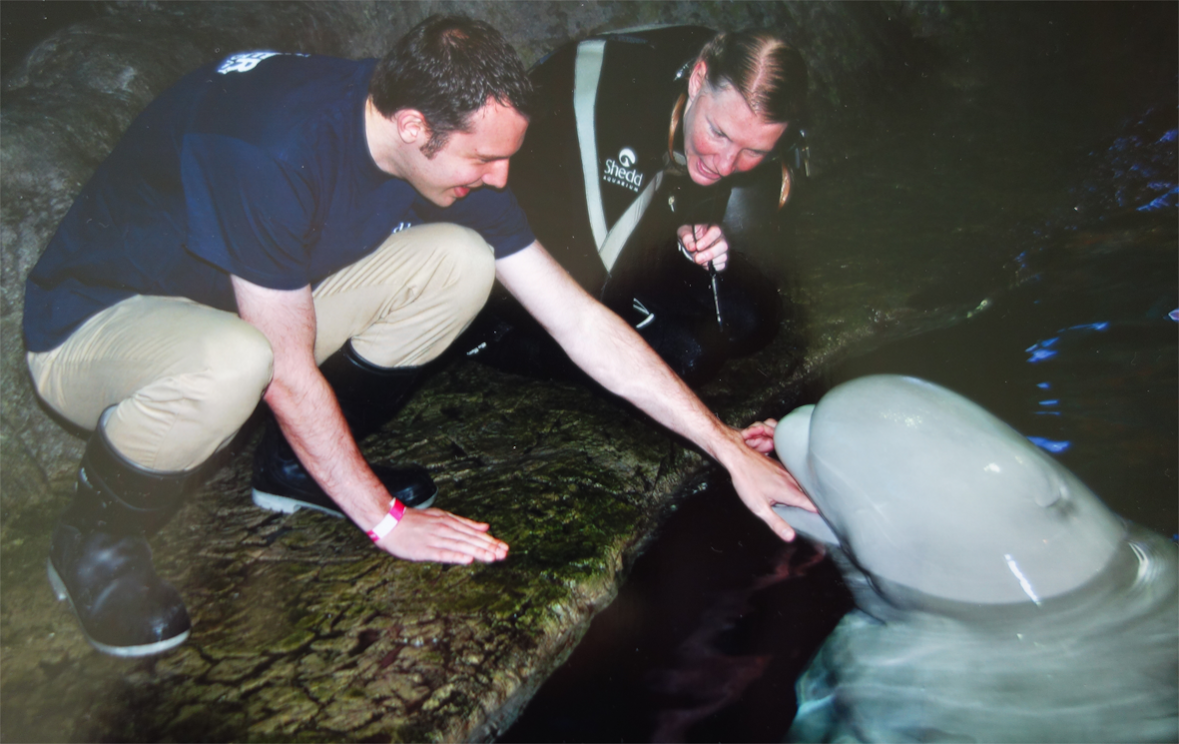 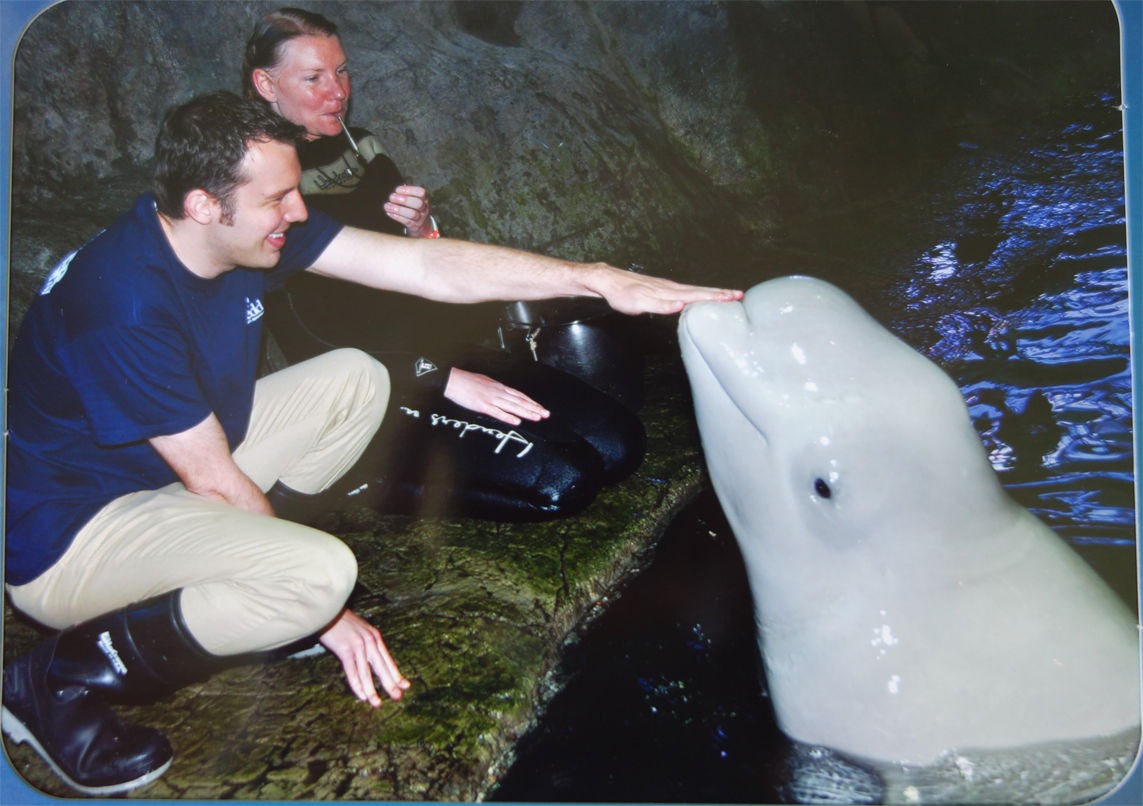