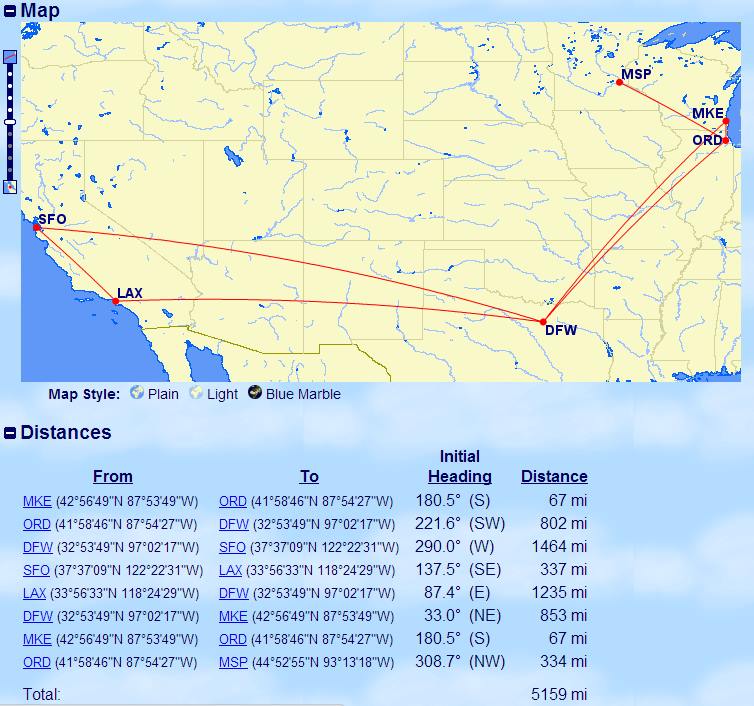 What’s a mileage run?  It’s something crazy people do, really.  The first time I read about them was on flyertalk – where there are some examples of some truly crazy runs.  There are many threads like this.  The purpose of the run is generally to qualify or re-qualify for an airline’s level of elite status within the time available to do so, usually a calendar year.  Efficiency is generally measured in cpm or cents per mile.  The amount of frequent flyer miles earned is a bonus but not the goal – if you could fly and earn more value in ff miles than the cost paid for a ticket, an airline would have a serious pricing problem.

Note the very first response to this post is a long string of airlines – fra-dfw-las-lax-bos-lax-bos-lax-bos-lax-bos-lax-ord-fra.  Someone flew that straight or damn well near it.  Check out the longest one I’ve ever seen – completely crazy.  I told myself I’d never do this; then I proceeded to do it twice on my way to try and earn Executive Platinum (EXP) on American Airlines in 2013.

Rather than miles or qualifying miles (different calculation) I was climbing up by segments (almost the same as flights; they can be used interchangeably for the sake of this article.)  This is probably the most painful way to climb up the ladder, as AA EXP required 100 flights and I didn’t even try to start running for it until well into the year.  In fact, there was a tiered bonus award program that came out and I was initially just trying to get Gold and perhaps Platinum as well as some awards on the the way; once it seemed like Executive Platinum was reachable I went for it hard.  This meant a lot of flying at an accelerated clip.

Most of my flights are actually short Midwest trips, which was not going to help this effort.  What did was an occasional conference or remote customer I’d have to visit.  I’m in the far nw burbs of Chicago and Ohare and Milwaukee take about the same time to get to.  The trick I’d most often employ was simply flying out of Milwaukee – often only a hop over to Ohare.  The extra time wasn’t too big a deal as I can generally work anywhere, and the cost was the same (actually even cheaper) doing this as Ohare’s parking is significantly more than at Milwaukee’s General Mitchell airport.  On top of the work trips I also did two mileage runs; I found them cheaply on ITA Matrix and had some vouchers to use from some complaints to customer service.  My itineraries were in fact segment runs more than mileage runs however as i simply needed the flights.

I flew MKE->ORD->SFO->ORD->MKE (4 segments) – the plane landed at SFO at something like 11:30pm scheduled to take off at 12:30am.  I just went to the AA lounge for a bit and got some snacks.  I was in almost the same seat (premium economy) on the return flight back to ORD – on the same plane, with the same crew.  I found it surprising that none of them said anything to me…  although they’ve probably seen it before…

This one was more ambitious – my trip was 6 flights, and I ended up needing to be in Minneapolis for work at the end, and was able to tack that on as another 2 flights.  It was designed as economy (mostly premium economy) to be 8 flights over 32 hours, and ensure I be on target to achieve EXP.  I routed it through Dallas twice to be able to take advantage of the awesome Amex lounge there and have both a breakfast and late afternoon experience there.  Best plans…

Unfortunately this didn’t work out so smoothly.  While driving at 5am to MKE, about 20 minutes after leaving my house, I got a call noting that my 2nd flight here from ORD to DFW had been canceled.  Why?  Dallas had a pretty major ice storm you may have heard about…  it is also a major hub for American Airlines so basically the company was dealing with an absolutely huge mess.  Ice sheets all up in Dallas… 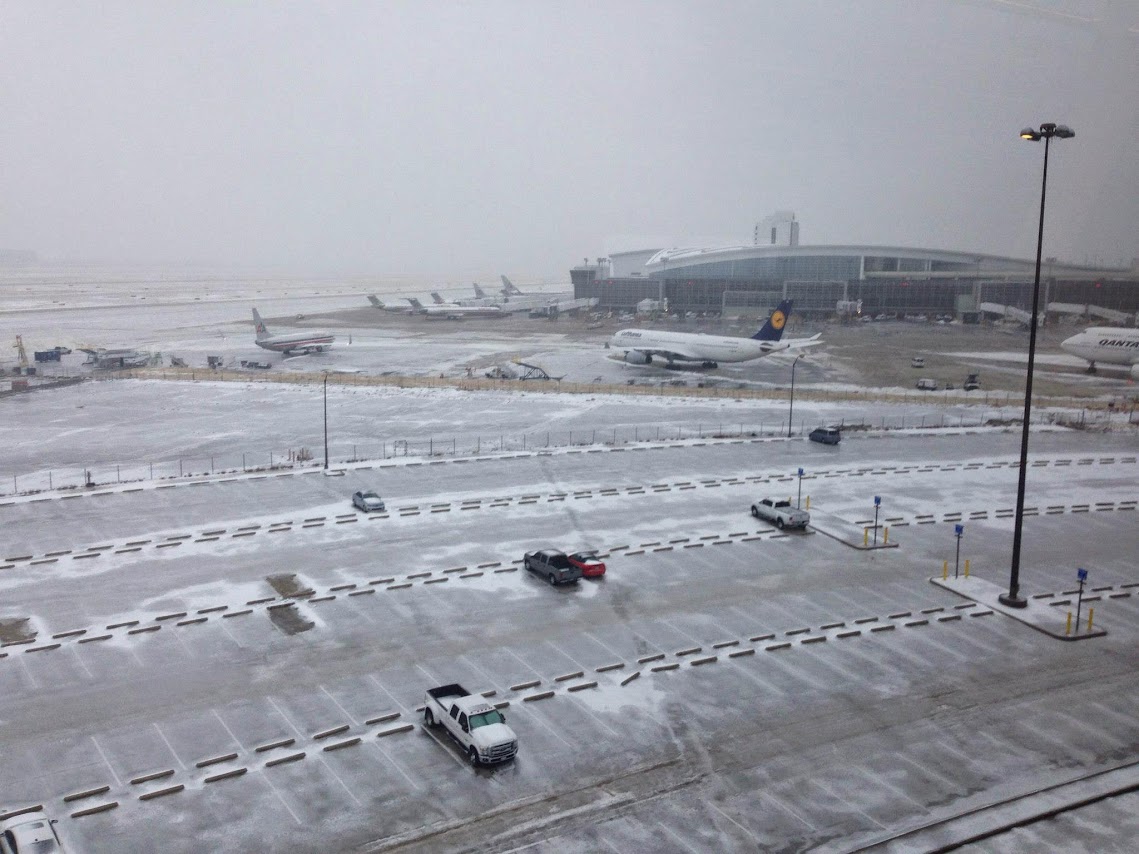 Obviously from the pics above, I did get there.  I couldn’t make it through to customer service to a human, even on the Platinum line at 5-6 in the morning.  Thousands of people were stuck there, some actually for days…  news article here.  I ended up working with some AA employees in the AA lounge to get me down there from Ohare.  They are trained to get people where they are going, not keep them up in the air as I was trying to do – so we were trying to be creative in ways I could still accomplish my goal and in which they could still follow policy.  My “destination” was San Francisco, and they would normally just put me on a direct flight there, the exact opposite of what I wanted, as I would be short (or potentially short) of having enough flights for EXP then.  They warned me that I may not be able to leave but did get me a seat on the way to Dallas.

Dallas wasn’t bad to hang out in because the Amex centurion lounge there is pretty amazing, so while there I took advantage of all sorts of free booze and brisket. 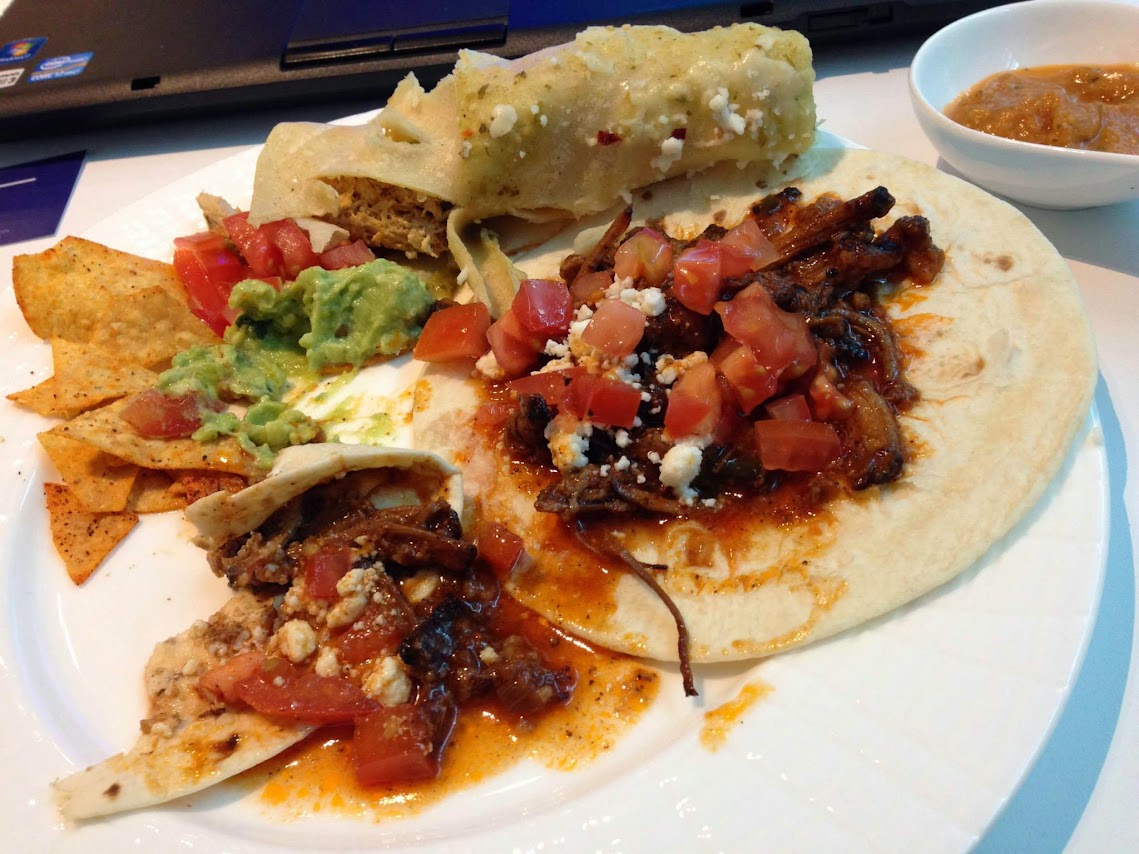 It was never very safe here though as flights were being constantly canceled and there were so many people stuck at the airport.  I think I’d be leaving and my flight would get canceled.  This is where the lounge access and the status really helped – although it was hard to reach a human on a phone or in the normal areas of the airport, in the lounges they were much more accessible.  In the end if you never visit a US domestic lounge you’re not missing out on much – but in a pinch like this they are very valuable.  My platinum status helped in picking up seats last minute to bounce around.  Usually bad ones, like regular economy next to the engine or the bathroom, but I was happy to keep moving!  My final escape leg on this itinerary was set to be a skinny ERJ-145 from DFW to MKE (yuck) but I got a lounge agent to route me back through California – taking Los Angeles on the way from DFW to ORD, certainly a major reroute and one outside of policy mileage deviations.  By then I think they were just looking to keep people flowing out of the airport though.  My final itinerary looked like this: 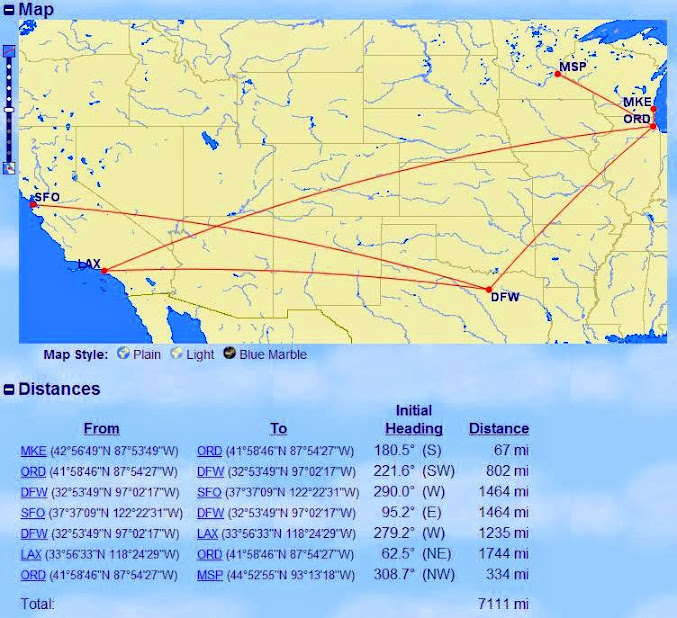 7 flights over 48 hours.  All in regular economy.  I was pretty tired at the end, and quite happy to collapse in my hotel bed in Minneapolis.  I left my door at 5am Saturday morning and arrived at the Aloft in downtown Minneapolis at 3am, thinking “damn, I’ll never do this again.  ZZZZZZzzzzzzz”  I certainly haven’t the desire since then, although now that I am EXP this exercise would all be easier, particularly sans adverse weather conditions, as part of EXP is automatic unlimited upgrades to first class when available.  So if I did a run today, it would be quite a bit more comfortable.  At present I don’t think I’m likely to hit EXP again, although I did it in less time last year…  I just don’t foresee that much work travel happening to places far enough away happening now though.

Some snowy ORD pics…  quite a pile of snow and a cold bird, my last (delayed) flight… 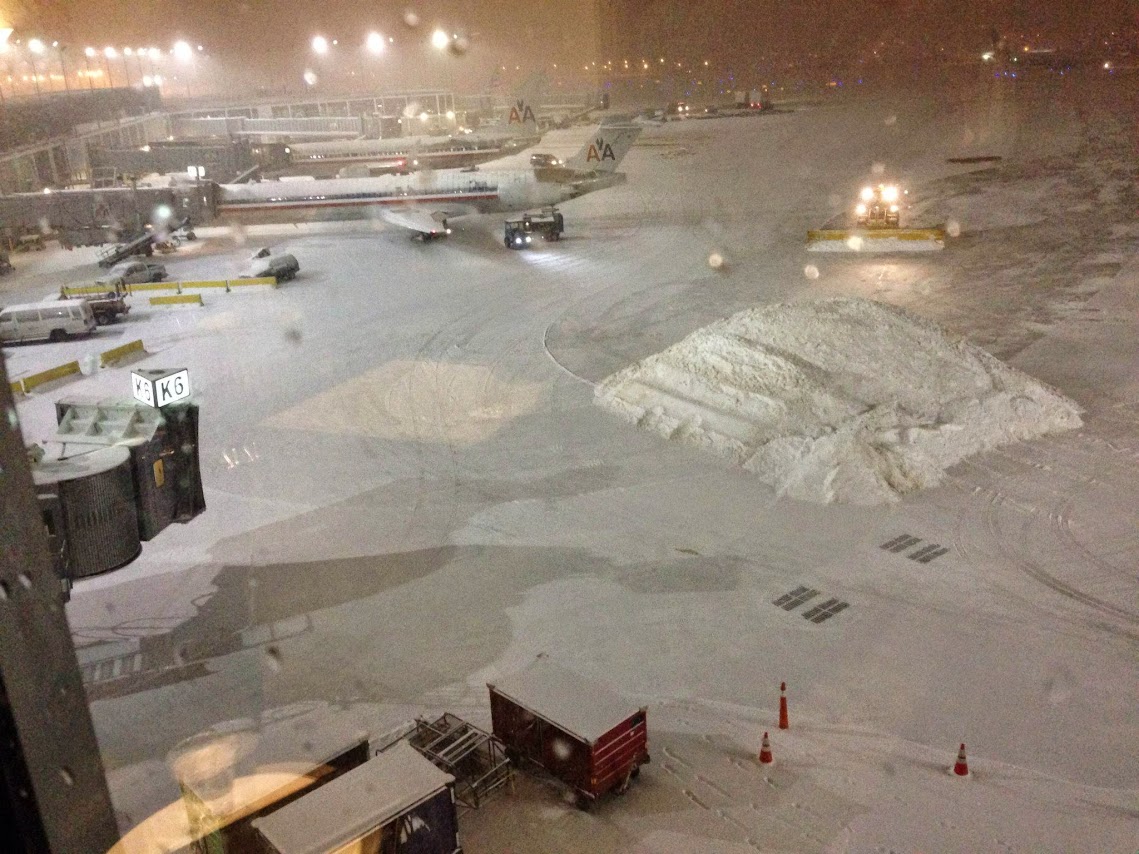 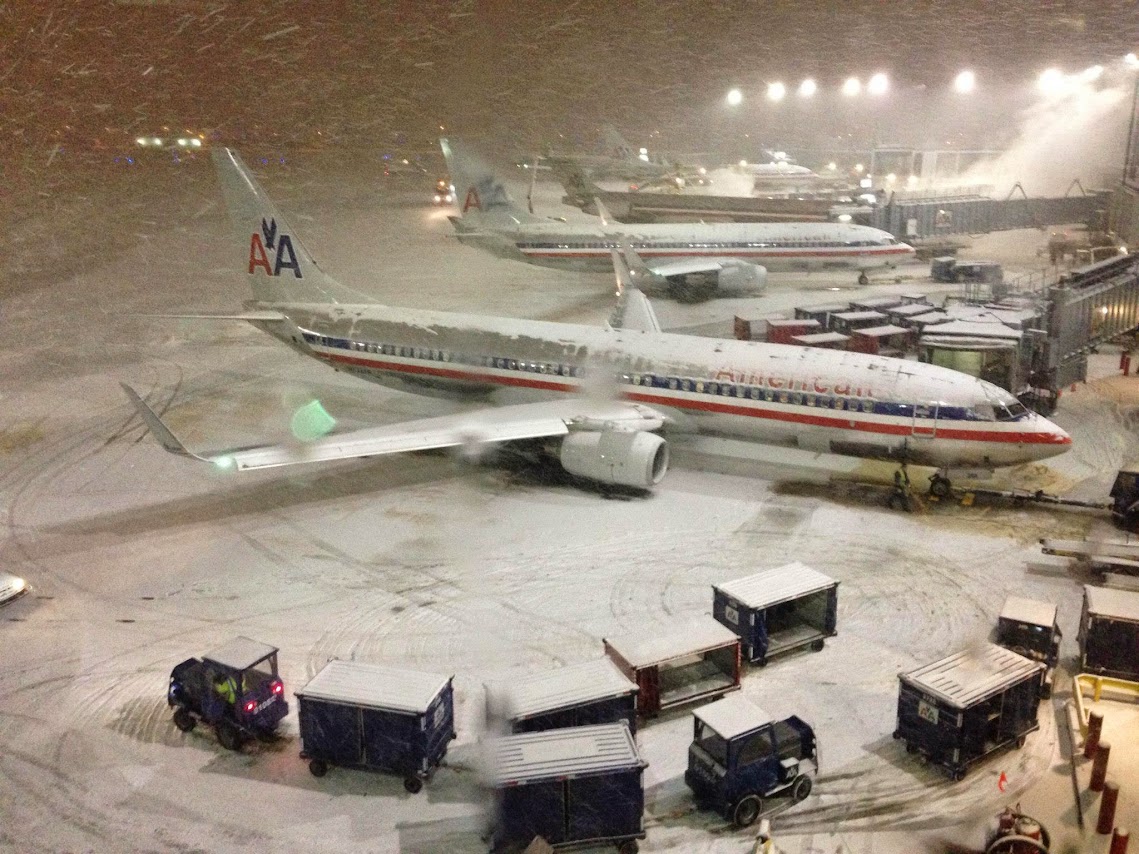 How aggressive was my flight schedule and climb to EXP?

I finished 2013 with 108 segments on AA; 8 more than the 100 I was needed… 8 being exactly the additional amount I was scheduled to accrue through my runs.  Wish I had those vouchers back for a new and much more fun trip now!

Was it worth it?

Benefits list from American and from flyerguide.  The big meaningful benefits with EXP to me were:

Was it really worth it for me?

Well, as I’m not flying as much this year, and as the majority of my flights are shorter midwest stints (most likely being ORD to MSP) then the first benefit really isn’t all that exciting.  The second is really cool – although these upgrades will expire by 2/28/15, and at present rate, I’ll have used none by then.  Since they must be used on AA metal, they are limited in available use to me, plus AA typically seems to cost more than other economy options internationally it seems.  These would be great if I hadn’t opportunistically hoarded a ton of points, but as I have done that, I am more likely to simply use them for travel.  They are indeed how I’m doing my next several international flights.  So odds are decent I will end up doing something like giving these away rather than using them, despite putting in all the effort to earn them.  So was it really worth the effort to chase EXP?  Not really.  If I have a chance to chase it again this year, would I?  At present course and schedule I don’t think I will, although should I have the opportunity I may chase it a bit, or at least Platinum.  I’m writing this as of July 1st, and so far qualifying via segments again.  I have 34 of the 60 required to be Platinum for next year.  We’ll see where I end up.