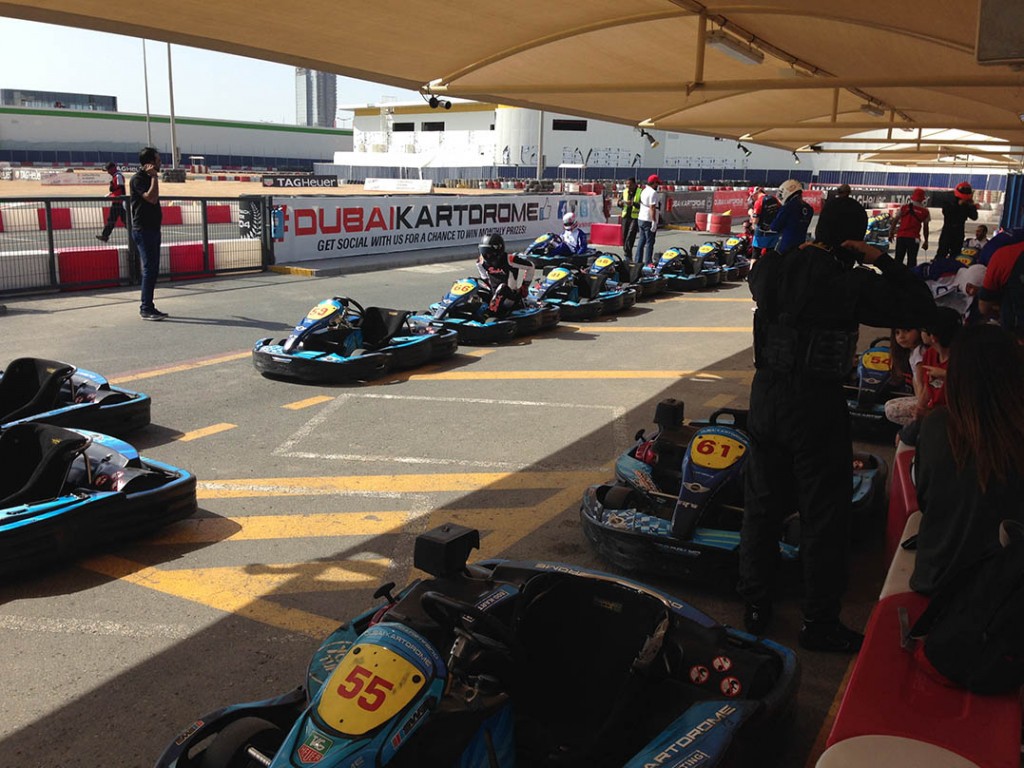 Looking for some of the best karting in Dubai?  The Dubai Kartdrome is close to the Dubai Autodrome – but not really a walk. I took a taxi and to the Autodrome and did a Review of the Easy Drift Experience at Dubai Autodrome as well as a Review of the Single Seater Experience at Dubai Autodrome (Stage 2) – after which I asked the staff the best way to get to the Autodrome, and they had someone from security give me a ride over, which was nice. There was actually an event going on until 3pm and I was hungry, so I asked him to drop me off at the shops nearby, and had lunch and hung out at a Starbucks for a while. This shopping/retail area is right across the street from the outdoor kartdrome.

When I got there, the private event was still going on – which was an awesome event. It was basically a corporation vs. corporation competition day – they had teams playing basketball, volleyball, etc. elsewhere – and here they had kart racing. There were both men and women’s races. I got to see the final of both. It was funny because the guys that came in immediately started cussing out and telling eachother off, while the women came in and were generally a happy bunch hugging eachother, lol. The only company I recognized outwardly was Pepsi – some of the companies had their own shirts and even racing suits.

Pricing: With the price list, at 5 outdoor races you are at the breakeven point. Since I planed on going to the indoor karts at least once, thought I’d only be visiting this one day, and thought I’d be leaving to go see the 100th anniversary of BMW photoshoot at the Dubai Autodrome, I didn’t sign up. I ended up doing 3 outdoor races and 1 indoor. These are 15 minute heats. There is no discount for buying multiple races or anything beyond the membership discount.

They also sold balaclavas for only 10 AED – it would have been much more helpful had I been smart enough to bring mine from home, while karting and sweating all across Thailand – nonetheless I picked one up here. Pretty cheap little souvenir, although I suppose a higher quality one would not have a seam as prominent, that can be uncomfortable if poorly positioned. They are available in red or black.

Karts: The karts are pretty solid and all felt great to me on each race. This is a pretty top notch facility. I was impressed to see they were even doing weight equalization for the women in their karting finale, never saw that before particularly on rental karts! I believe these are Sodikart RX7 400cc 4-stroke karts, it looks like I got up to 54 mph at one point. There are occasional SWS Arrive and Drive Races, which are done in the newer RX8 karts. However one must have a 1:14 lap to qualify; and my 3 sessions went: 1:16, 1:15, 1:14. Part of the challenge is it’s a large track with a lot to learn, and another part of the challenge is the races always seemed full and with a lot of karts – there is a lot of traffic and it’s not all particularly quick traffic either.

Track: The track is really cool. It’s obviously pretty long at over 1 minute laps, it’s got a tunnel, elevation changes, and cool turns throughout. It’s a ton of fun. 1.2 km.

Popularity: This places is really popular with both locals and visitors. Not only will you never go out and race alone, you may never have a race where there are less than 15 people in it! This place is hopping. Interestingly enough, similarly to a visit to Yas Marina Kartzone last year, I saw several groups of muslim girls show up, totally by themselves, to go karting. At least two groups here. Plenty of other women with families and guys, but there were at least two groups of women by themselves here – something I have never seen a group of women do at any karting place I’ve ever been to outside of UAE. There is a downside to all this popularity – and that is the potential traffic on track jamming up your line and lap times. When you have people with very different skill levels, it can be a problem for both as faster people coming up on slower traffic is much more likely to create a problem. In my second video below, I can be seen both navigating through traffic as well as… not completely avoiding smacking some people. The race starts here are also interesting – basically a guy goes out in front of the group as a pace kart, with the intent that people follow behind and learn the track. The majority of people seem to act like rabid dogs during this period, biting and nipping at his heels. There’s smashing and crashing, going well over the berms, swarming, rushing and braking, etc. it’s all going on a bit crazy by many of the people during this period. They then go on to lay pretty uninteresting lap times so mayhaps they should consider some fundamental driving techniques and learning the track better on this lap rather than being aggressive lunatics? The swarm in Session 2 (my first video before) is the least aggressive one I was in, particularly at the start, I think because I was lead behind pace car and was just calmly following him for a bit. It’s the only swarm I fully show on video. In the second video, you can see the start of Session 3, where I’m hit in the pits pretty hard a few times, then someone crashes before even getting to the track! Same person? I don’t know. I do recall being particularly annoyed that there was a lot of talking going on during the pre-session class on how to drive and keep safe and all that.

Timing: They of course keep track here. My times are not bad, but definitely need more practice to get pulled down. 1:13 is pretty good and 1:12 is really moving, even a 1:11 here!

Video: If you click the title on the embedded video, it will open up in youtube and you’ll be able to full screen it.

The first video is of Session 2 which I did my best in and was fighting with this guy Benji, who really was a bit quicker and more consistent than me. Also a local I believe.

I edited this one to have some video from each of the 3 sessions I did, and try and show a little more of action, or dirtier parts where I’m hitting someone or someone is hitting me…