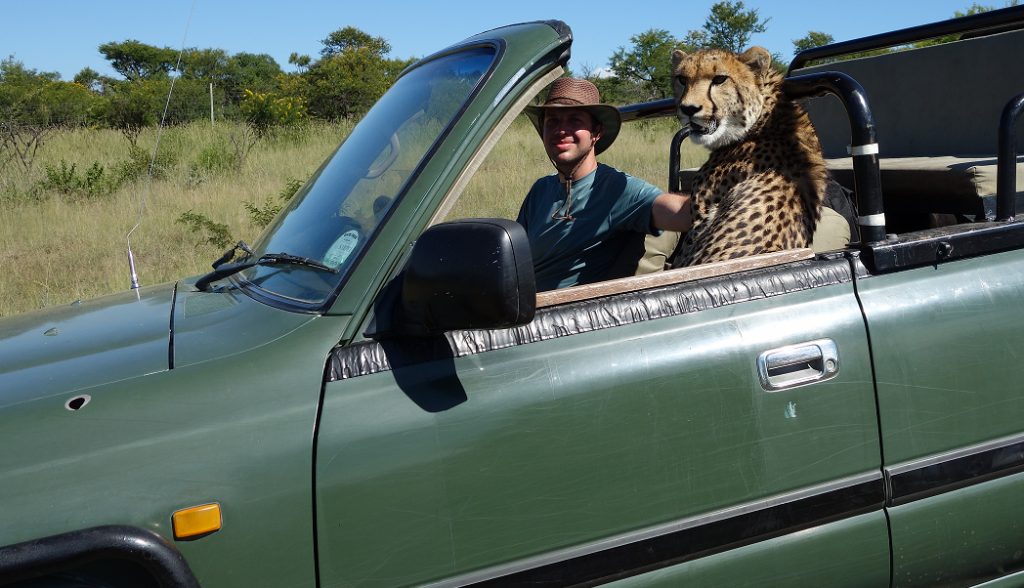 Right now you can score a pretty sweet deal on picking up a single card and going most anywhere in the world, maybe even two other continents.  How do we do that?  First off, let’s pick up them points.

Right now there is an offer for 60k Chase Ultimate Rewards points via the Chase Business Ink Credit Card.  But Can You Get A Business Card?  (Yes)  Will a new card adversely affect your credit? No and no – in fact I believe these business cards are not even associated with your personal credit score, even if you are a sole proprietor.  So boring stuff aside, let’s get those points.  You need to spend $5,000 in 3 months to get 60,000 as a sign up award.  Oh but how to meet that requirement?  Any mix of these will do:

Quick and easy is PayPal – I can send you $5k, PaypPal takes some, you withdraw the money, hand me it, and I pay off my bil.  Done, ta-da.  Per the PayPal fees calculator, this would cost you $145.30.

A more advanced ninja would buy 17 $300 visa gift cards from staples.com.  I’m not sure if these are in stores.  They have an $8.95 activation fee.

Office Max, for the time being, has $200 visa gift cards with $6.95 activation fees (as does Staples.)  However on purchases over $300, they have a promo giving you $20 back instant rebate per card right now.  They get finnicky about purchases over $2000 so best bet is to get $1800 worth of cards, picking up a $120 rebate.  You may as well just do 3 store visits of 9 each to get full rebate advantage for 27 cards total.  So what does this look like?

You read that right, I used the word Mediumer and you are getting paid to collect all these points for Office Max.  Do note that both the latter options involve more butt in seat and time and effort to do things like go get and/or liquidate these gift cards.  What is the best way to do that?  I would open up a Bluebird Walmart account, or similar (Target Red, Serve) – and load the cards to it (they work as debit cards, although you can’t directly take money out of them.)  Once the money is in the Bluebird account, you can use it to pay your mortgage, transfer it to your bank, pay your credit card bill, whatever.  It’s in a bank account at that point, Bluebird acts as one.

Chase transfers to a bunch of travel programs, one possible sweet spot being using Korean Air for domestic US trips.  However we can also pull off some sweet international trips using open jaw and stopover rules on United.  At 65,000 miles above, you can fly many places round trip in economy.  With 86,000, you can pretty much fly any place.  There and back is simple so I won’t show any sample itineraries for that.  Let’s look at some cool ones instead, shall we?  A note on flights – I’m lazily finding them for examples, but it should be understood points flights are more likely to be at less convenient times or may have another stop on the way etc.  Not too big a deal in a premium class of service, although in economy a bit more tiring of an experience to be sure.  Maps will only show those cities stopped in for > 24 hours.

Chicago to Munich, Munich to Istanbul, Istanbul to Chicago. 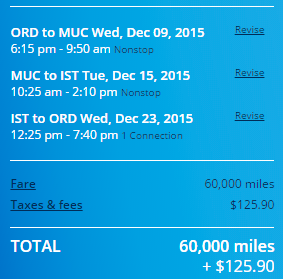 Open Jaw in Africa vs. Stopover in Africa to Destination Japan

It’s 80k miles to go to South Africa.  Although South Africa can be used as a stopover on the way to Japan, and price out for the cheaper Japan price as Japan is a ‘more powerful zone’ in terms of how United’s calculation engine sees the world.  I’ll use this example to also show what an open jaw looks like (in one airport and out another.) 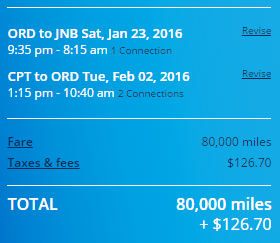 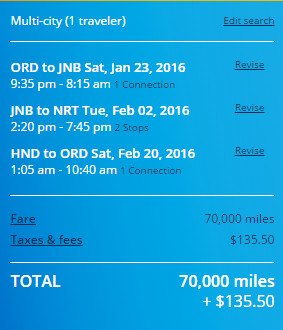 Looky there…  miles cheaper to add another continent!  A little more in cash for fees/taxes/airports.

Open jaws can be at the start or destination cities.  In this example we’ll open jaw to see Europe, stopover in Chicago to go back to work for a few months, then take our second open jaw to Rio.  This second open jaw pretty much has to be north/south.  If it’s in the US it won’t cost any more points, just $5 for airport fees.  If you go South to international destinations it will cost a few more points, and a few more for South America.  Good news is it’s not a lot, plus it inherits the prior class of service if you happened to fly back to Chicago in business class!  Bad news, this is a cheap one way – but you still need a way to get back!  (Better get some more points!) 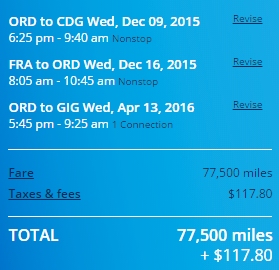 That’s quite a bit of value out of one card and one sign up award.  A simple approach to the card gets you an easy trip to Europe, a little more effort and you have enough points to see multiple contents and have points left over.  In fact, with the Office Max rebates, you actually make $172.35 – which is more than the fees for any of the trips above – so the trip (at least the airfare) is less than free, you’re being paid to take it!  You can apply for this offer here – Chase Ink 60k.