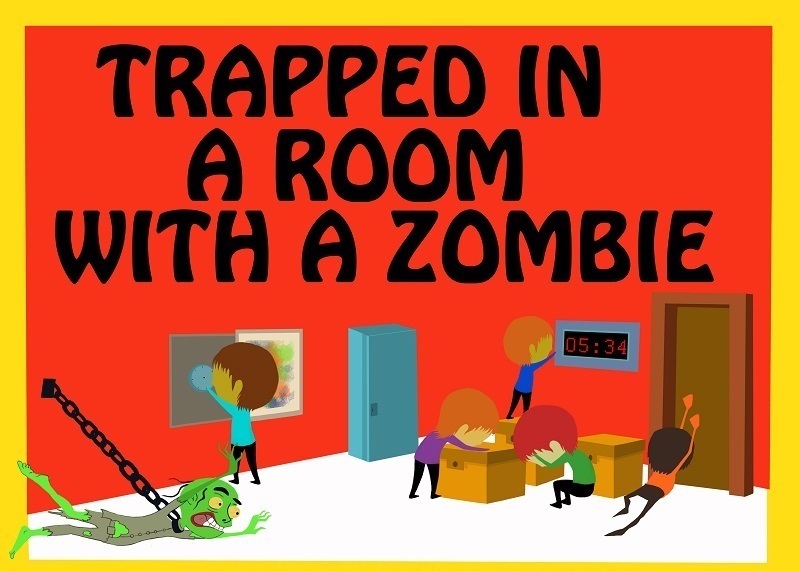 Some friends and I recently tried a real life room escape game for the first time.  From traveling and poking around TripAdvisor these seem to be pretty popular and growing in popularity.  Basically you and some friends/strangers are all trapped in a room under various scenarios, with puzzles to figure out to unlock the door and escape within an hour.  We did a scenario put on by Room Escape Adventures put on in downtown Chicago, at the Fine Arts building on Michigan Avenue.

In our scenario, there is a doctor gone zombie whose chains are let looser every 10 minutes as the 60 minute timer counts down.  If he manages to touch anyone – bam they are dead, out of the game and can no longer participate.  If your group fails to escape within the hour he eats you all as well.  Tickets are $28 and must be purchased in advance.

You get some name tags to better facilitate communication among your group; since it is important to work together to solve existing problems and not have anyone re-solve puzzles that have already been figured out.  We went in September and quite a few people had already been to the room! 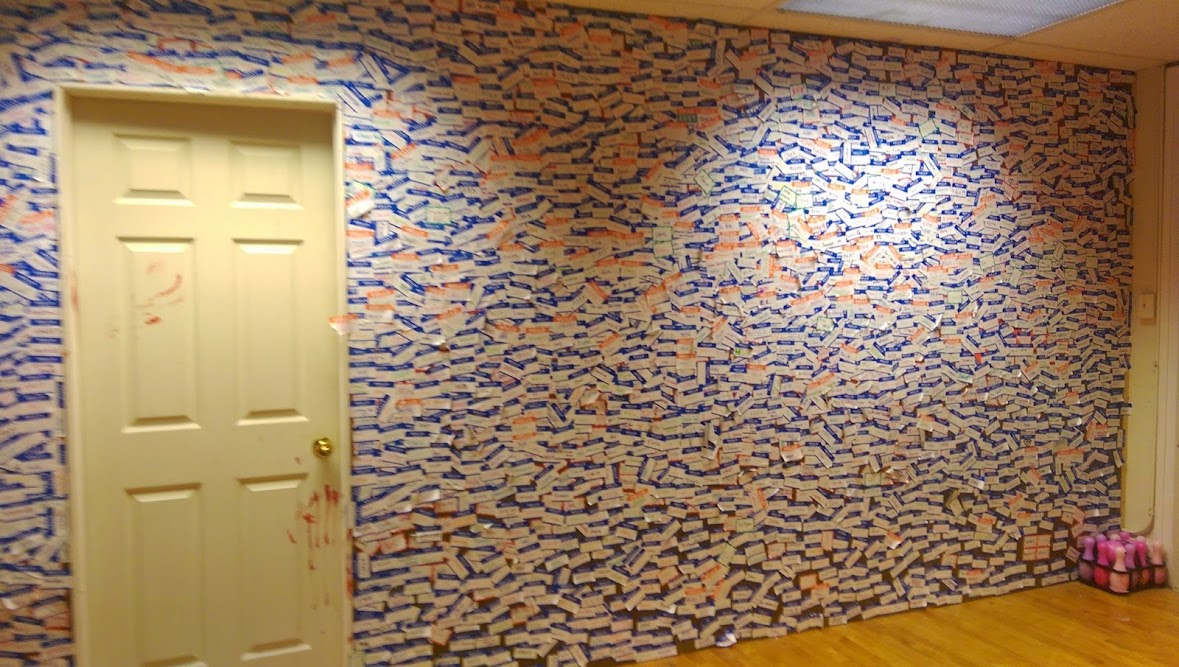 However, a not so high success rate – per these stats only 26% had made it out.  Given the quantities on the board I think it’s safe to assume this is the number of groups, rather than individuals, who escaped vs. turned into meat… 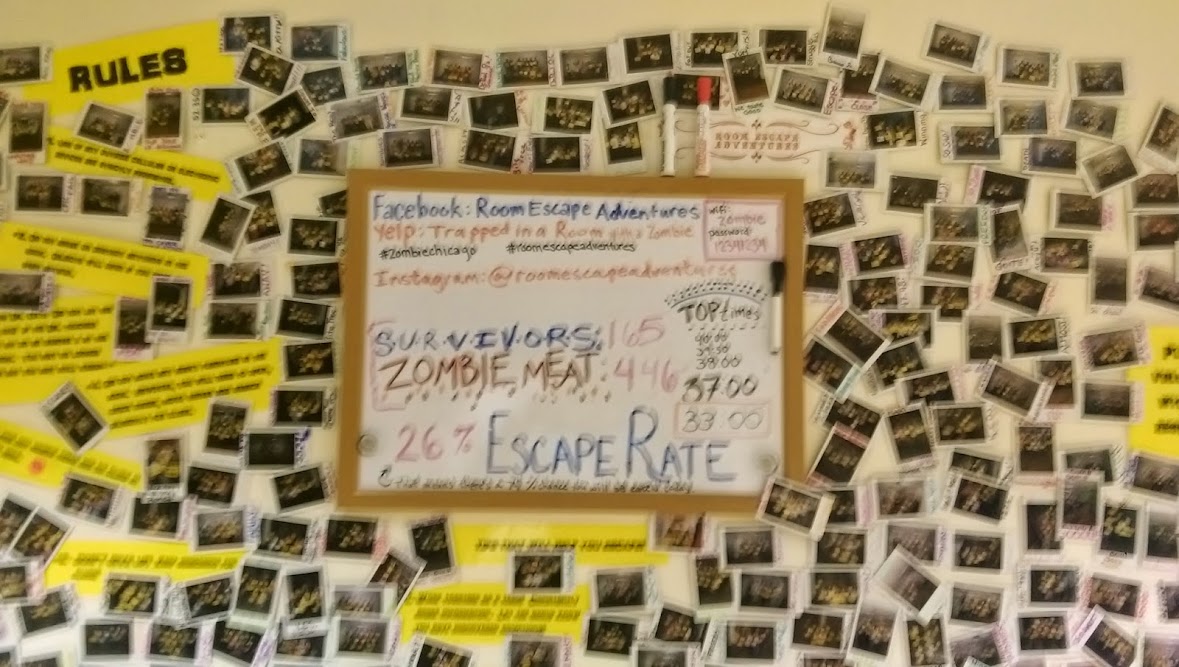 So how did we do?  We made it all out!  No one succumbed to the zombie’s death grip.  On the board above you can see the top times as well – our host said we were blazing through the puzzles at a wicked pace the first 20 minutes or so, although after that we stagnated for some time.  We did not in fact solve them all by the time we got out – we had a partial combo for the final lock to the door, as well as a little guidance to go on, and a bit of luck that came into play.  I don’t recall our time but think it was in the low 40s; armed with the above knowledge I started to brute force combinations into the lock, but with some luck and somewhat of an idea for remaining combos I ended opening it up quite quickly – it happened on my second try.  Escape to freedom!  I suspect we would have made it out even if I had not tried this method, although it might have been a lot closer.  All in all it was a lot of fun, and I would do something like this again and recommend others to try it. 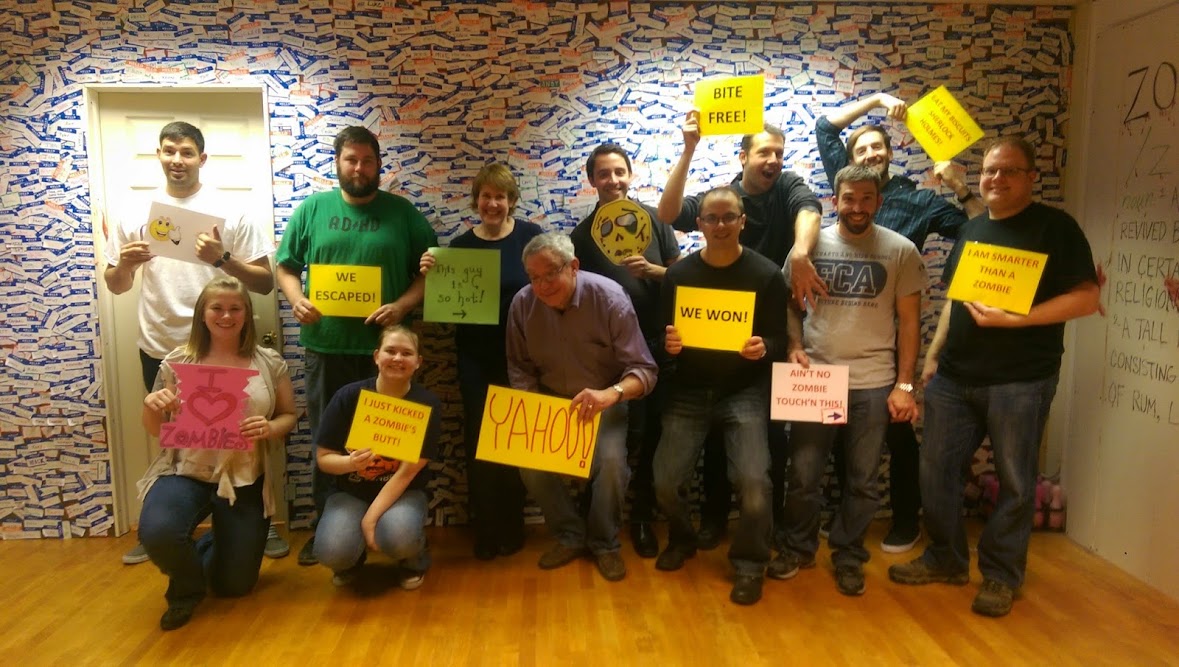 It looks like it’s been around long enough and they’ve had enough demand that they will be running another version – since you can’t really go back and play the same game again.  There is now a ‘still hungry’ sequel to the game, so I may have to try and gather some friends for a round 2 challenge some time this winter!