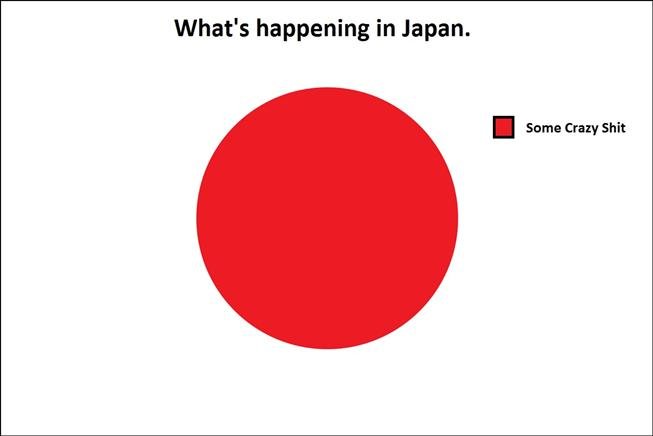 Japan seems a must visit at least some time, for all of the crazy interesting things going on there.  How can we get there?  It’s December ’14 and I’m poking around September ’15 – rates are only even loaded to book out through November for any flight (points or money) – so this is quite a bit far out.  Certainly availability and prices may change.  What am I seeing now?  Pretty pricey… 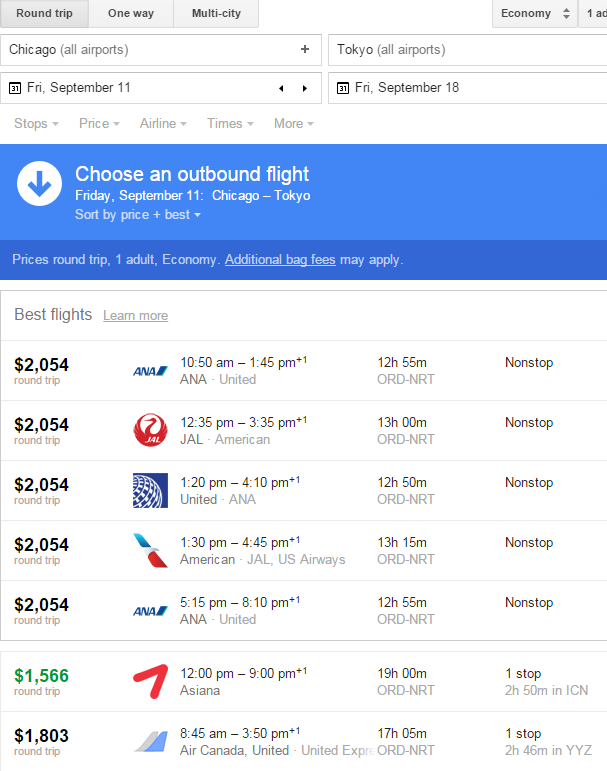 Through American Airlines/Oneworld Alliance I found a trip for 65,000 points and $45.20.  Direct!  I actually found it on British Airways search/tool first.  Lots of AA flights in this time segment appeared to include a lot of stops.  I don’t mind 1 stop, but many were 2 stop… that’s more of a pain. 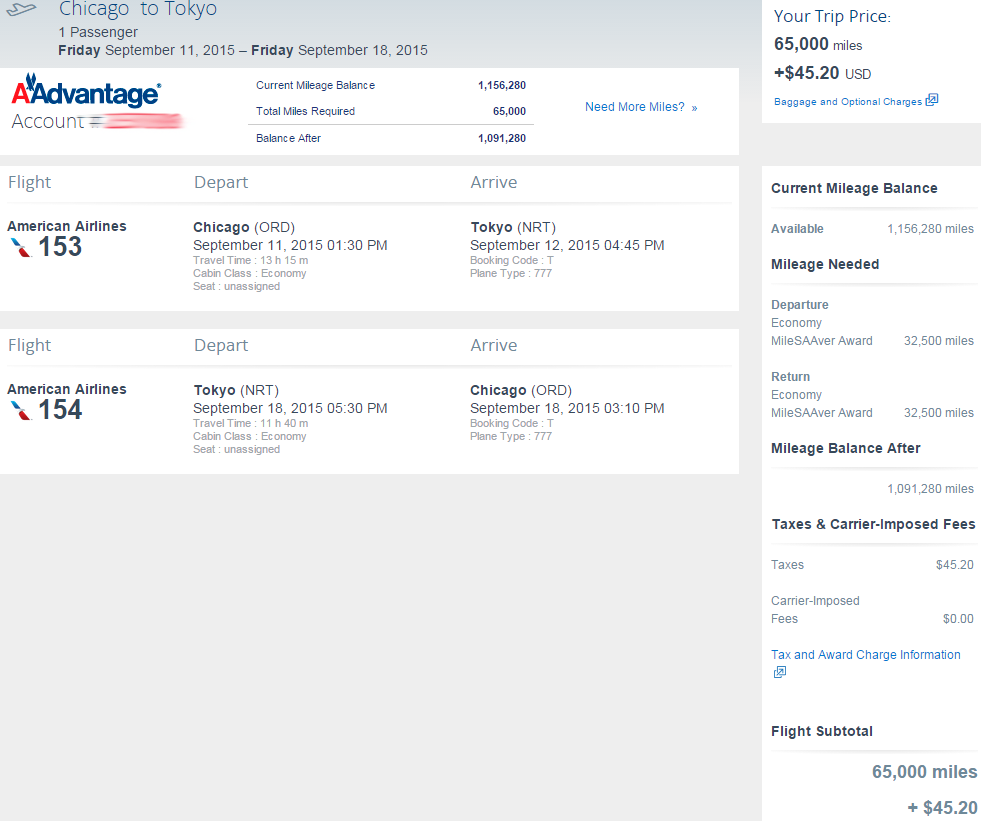 How much value are we getting out of these points?  (2054-45.20) * 100 / 65000 = 3.1 cents per mile.  Pretty great value out of these points.  What if we take on the pain of the stops and do this math from the Asiana flight?  2.34 cents per mile.  AA.com doesn’t show all Oneworld availability; AA is partners with Japan Airlines (JAL) however, whose availability is shown on British Airways.  Other tools can be leveraged as well.  If you find award space on any of the other tools out there, or call them up, you can book these flights too; although you will have to pay a phone booking fee, which varies by elite status.  I found a JAL flight available at the same time on BA.

What’s going on here?  A trip via United will run a few more points, 75,000.  However United still allows for open jaws and stopovers.  For more details on these you can check my posts on how to get extra trips and how to get 1.5 vacations out of 1.

It was easy enough to book a trip with stops online – the easier international choices were Beijing, Shanghai, and Seoul.  Domestic stops could be had too, although hey why stop in LA if one can stop in Korea?  I suppose one reason might be if there was availability and you really wanted to go over on a 787, then stopping or at least going through LAX would be a way to make it happen.  ANA flies these to Tokyo.  On with the stop itineraries. 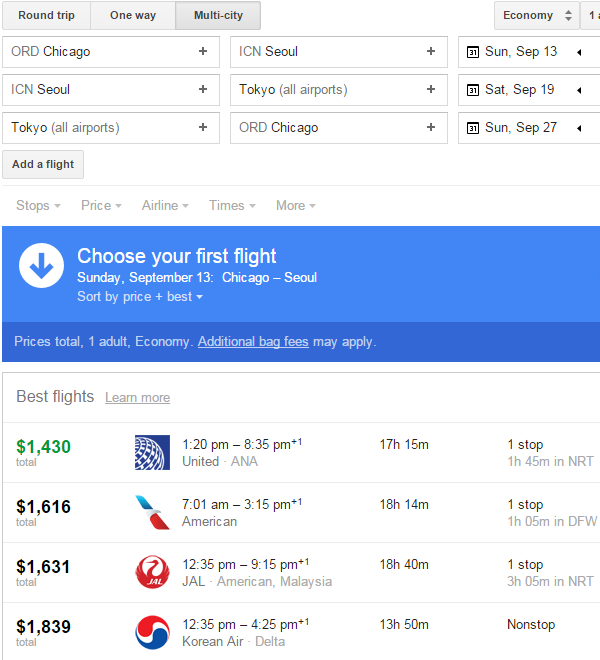 This doesn’t seem a bad price for this itinerary at all, even with the nonstop route; at least in compared to the AA dates priced out.  How’s it look on United? 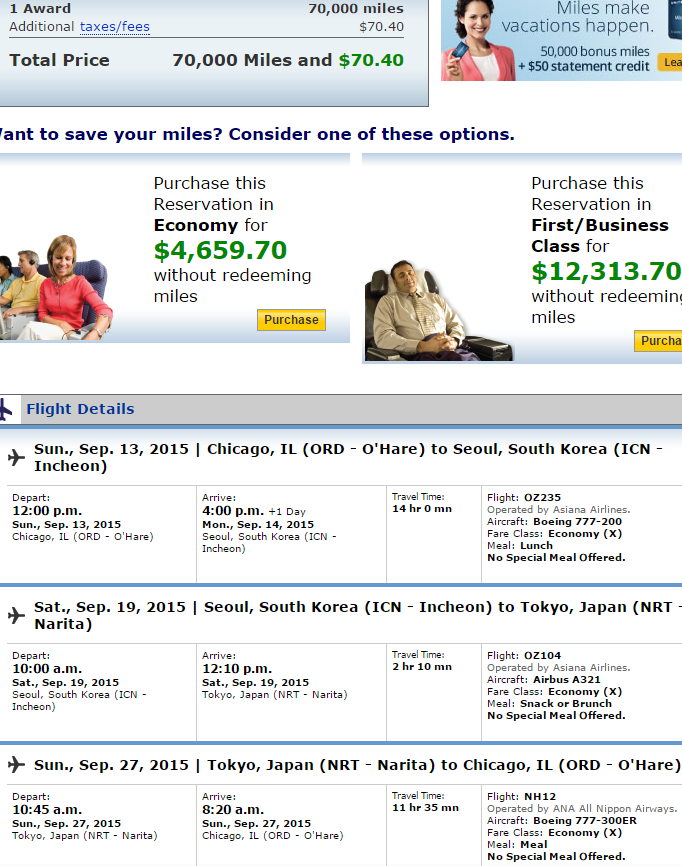 How about business class yo? 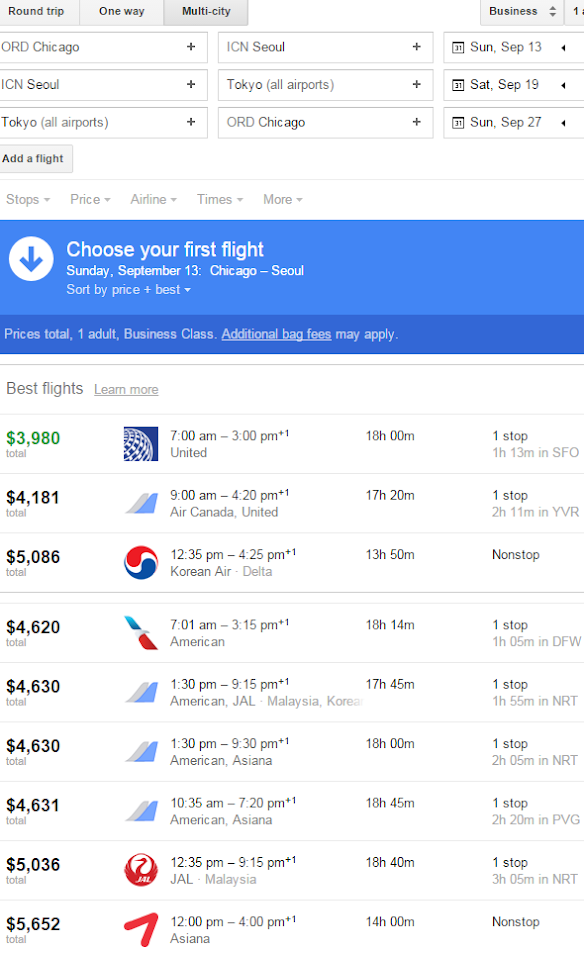 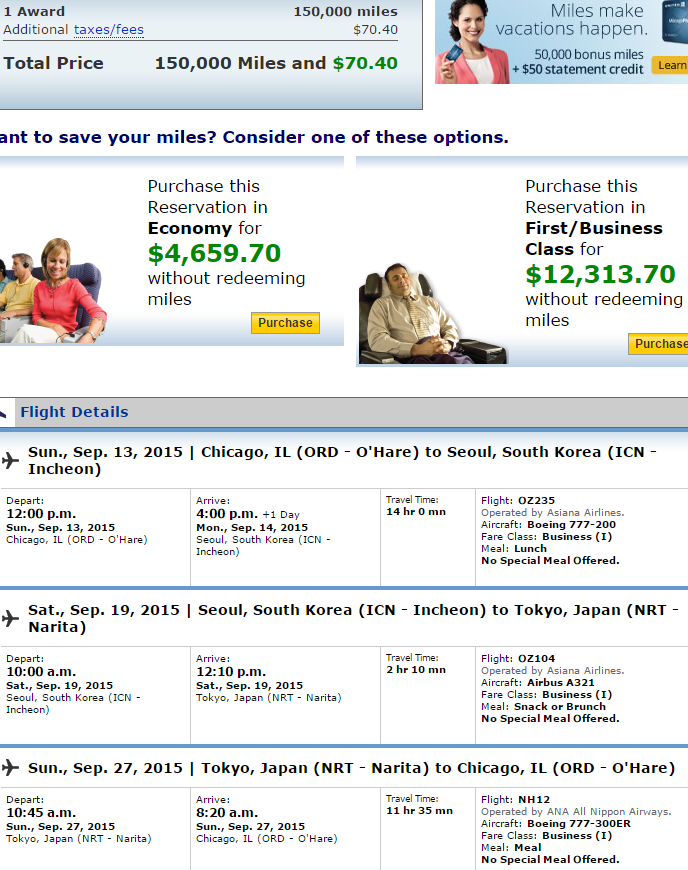 Wapow.  Ours is even non-stop!  What does this end up being in terms of valuation, what are we getting out of each point?

These are all pretty good – acquisition cost even through manufactured spend should be 1 cent or less.  The Points Guy as of November ’14 is valuing AA at 1.7 cents and United at 1.5.  If you’re picking these up for less than that, and getting that or more value out of them, you’re basically winning the game.  Of course with new card sign up awards these points cost just a fraction of a penny.  Basically the above are all good awards though – they have met or exceeded that threshold, and by quite a bit; definitely worth using points to buy these tickets instead of money.  As an added bonus points tickets are basically refundable.  Points get returned and a cancellation fee imposed if an itinerary is canceled; the fee may be waived based on elite status.

More creatively open jaws can be used to stay in Japan, have a stopover in Chicago, go back to work, and then carry on to somewhere else – for free or cheap.  This can be thought of as a free one way, which can come before or after your trip.  The following also cost 70,000 United points (and a modest charge for hitting another airport – $5 to $25). What’s going on here? One open jaw to stay in the East Asia region, one stopover to stay in Chicago, and one open jaw for a trip before or after to San Francisco as the second open jaw. Of course if you do this you’ll need a one way either to San Francisco at the start, or back to Chicago to get home at the end. Note these legs inherit the same class of service as the ‘main’ part of the itinerary – economy, business or first.

2500 extra points to Hawaii or Mexico or Central America as defined in the region list above.

10000 extra points to South America.  I used this to get to Buenos Aires in business class for 10k points and $25 earlier this year.  I returned from SouthEast Asia in February and was simply on a long layover in Chicago until September, you see.  3 countries (need to buy a Tokyo to Seoul, and a one way Buenos Aires to Chicago home though still).

An itinerary like the above requires the whole thing to be completed within 12 months.  The stopover can be for however long one would like; if plans changed it can also be moved, $75 as I recall for non-elites.  Some of these itineraries may require calling United to assemble the itinerary – for my own trip to Buenos Aires I had to do this, I couldn’t get the site online to assemble it.

You can get the platinum select card, both the personal and business version.  This will require $6k spend (3k in 3 months on each) to get the award points.  Which you’ll have quite a few of once complete; 106,000.

Currently the Sapphire has a 40k bonus of Chase points, which transfer to United, after $4k in 3 months.  A United MileagePlus Explorer offers 30k miles after $1k in spend.  That’s 75,000.

There’s a few ways to hit the spend and I have other articles on all sorts of questions that newbies may ask.  A worst case, lazy scenario, could be just sending your budddy money on PayPal and having them hand you the money back.  A better way would be buying $500 Visa gift cards, loading them to an Amex BlueBird account, and using the account simply pay the bill or to pay real bills like the mortgage.  Pretending no spend is done on actual bills, what do these scenarios look like?

The points are obviously cheap – fractions of a cent.  So super cheap, even if you don’t ever use them all.  Obviously less than the TPG valuation above, and far less than our costs to fly anywhere.

What is the BEST CASE CASH flight to Japan above?  $1430 with stops.

What is the WORST CASE POINTS and cash flight to Japan above?  Both are still nonstops; for AA it’s $220 and UA $245.  With lots of leftover points for AA (41k, easily enough for a round trip in the US) or the opportunity to take advantage of an extra stop or trip on United for free or quite cheap.