The government of Argentina has made it illegal for citizens to hold US dollars, because governments like to apply stupid economic ideas all the time.  So why not this silly and outdated one?  For more on this topic here’s an article from The Guardian earlier this year.  Some of the articles out there make it sound like getting pesos on the blue market is sketchy or make it out to be a bigger deal than it really is.  Both times I exchanged money, they were pretty close off the street in little stores, that were probably moving little product but exchanging plenty of money.  It’s not scary, so don’t be frightened into sticking with paying for things at the official rate, which is significantly less than the blue dollar rate.  Obviously it’s really a black market, but apparently Argentines have chosen to name it blue; in an effort to imply there is nothing illicit about it.  These are not drug dealers who are doing illegal things and trying to hide cash, simply normal everyday citizens trying to get by, live life, and save some money without it being devalued.  Inflation estimates vary among 20-40% per year, and as usual salaries are not keeping up, so people get squeezed.  Until something breaks.

@DolarBlue can be followed on twitter, announcing exchange rates.  It seems to be updated once a day if not more.  Updated less often (so I’d speak about the rate) is Exchange In Argentina – these guys will come to you.  However it is $300 minimum.  This is pretty convenient if far from Florida, as, as far as I know, Florida Street is the only one where exchanges are widely present.  I walked there my first day as it was pretty close to my hotel; I arrived very late the first night and my host was on a trip so stayed there two nights.  I needed more money later and went on a long walk to Florida from Palermo SoHo as I needed a good walk and some cash – but far less than $300 worth.  There are people standing everywhere calling out “Cambio, cambio!” so it’s not hard to find one.  Men, women, young, old, dressed normal, dressed snappy in a suit – whatever to get your business.  Wonder what works best?  I went with a woman both times I exchanged.

The first one was pretty close to a “start” of the shopping area at Florida Street, right by the Plaza San Martin.  Blue Dollar on twitter was 15.  I said converting $60, she said 13.5.  I asked about 14, she said no.  I went with her – although I think I should have gone up to someone else or walked down the street a bit more to try someone else.  In any case I followed her, into a little shopping store in the HoJo building where the guy didn’t seem to be doing anything but exchange money.  Did so and left.

The second time I went further down the street and approached an older woman.  She asked how much, and I said $100.  On twitter it had risen up to 15.7 that night but at the time (morning?) the most recent tweet was 15.25.  I was told 14.5 for under $100, 14.9 for $100, 15 for more.  Mind you my spanish is no bueno so this was basically my English and her notepad and numbers.  When I saw the 15 I said $120.  Note on all offers here the spread is far less than when I went the first time.  These sounded great to me so I didn’t ask a second person like I had originally planned to, and just went with her.  Went a little down a side street and into a shopping center again, this time into a little store (and I do mean quite small, as in like bathroom sized) that appeared to sell some leather goods, all I remember was a rack of belts though.  Here the guy told me that the 14.9 was only good for a $100 bill.  One could certainly argue this doesn’t matter but I don’t find it surprising to put a premium on them either.  I accepted the 14.5 and only exchanged $100, which turned out being more than I needed, as I left the country with probably $30 worth of cash; and the notes are not exactly in high demand given the inflation rate.  I paid for a taxi in Montevideo with some at a horrible horrible rate, and he didn’t even get me to where I’m going, but oh well.  They were semi-useful there.

When walking around Recoleta I recall seeing some restaurants with USD in the window noting 13.5 pesos offered per dollar for food consumed there.  I assumed in general restaurants would honor this and I could use cash, however that didn’t work out so well for me at one called Limbo, where I was running out of cash from exchange one and had not yet gone on my trip (the next day) for more.  My bill came to 191 pesos; I put in 75 pesos and $10, with blue dollar at 15.5 at the time. I figured this was, at minimum, 210 pesos; 10% is the standard tip, and the offer seemed very fair to me.  My waiter came back saying it wasn’t enough – also my bill was now stamped with a tip not included – 10% recommended.  I was like hmm wtf…  so I took all the money and put in a $20.  Between the restaurant possibly not giving me as good a rate as Florida Street, but with the blue dollar being up and the 13.5 in someone else’s window before, I was expecting to get 270 pesos out of the $20 USD, so pay the bill and leave with change.  The dude came back again, saying it wasn’t enough – pointing to the $22.60 (official rate exchange) on the bill.  The official rate is 8.5, and also, ridiculous.  So I said wtf?  Here’s my Chase Sapphire buddy – I’ll take 2x points on dining and go official on this if you’re going to make me.  I then left a 10 peso tip.  My original offer had one that absolute minimum was worth 19.  I’m sure he was simply going to pocket my cash and put in his own pesos in the end, but guess that backfired buddy.  Tarjeta de credito won your little game.

In the end the food was great, even at the official rate.  Let’s round up and say that was $24 – for that I got the bread, a bottled water, and a really tasty salmon, while in one of the nice areas of town (Palermo) – and the salmon really was quite good.  I’m a big fan of salmon and have it a lot – this one was done right.  210/14 if I had enough pesos, this meal would have been only $15. 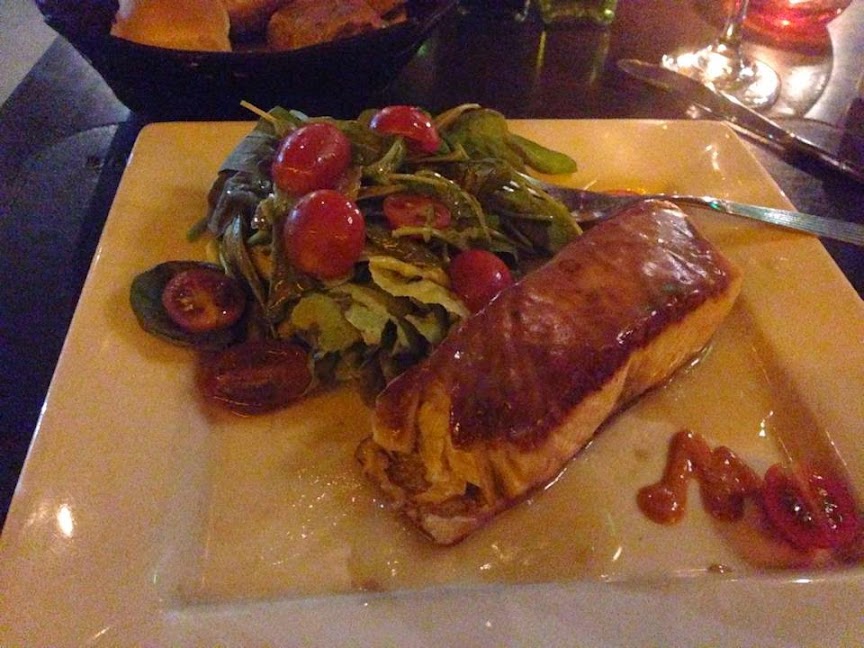 Other food was even cheaper.  I had some pretty solid burgers at Dean & Dennys with great fries too.  Also a burger at Sugar which as I recall was 1/2 lb, with good fries, and a beer, and a little dessert thing… sit down with a waitress and only $5.33.  Pretty wild.

I ended up paying with my credit card for the hotel as I did not bring enough cash, or at least I didn’t manage it intelligently.  I’m not sure if taxes were added or not but there is a 21% VAT which will not be added if you book online.  I booked Feir’s Park Hotel off booking.com, which just places a hold but does not charge for the hotel.  $157.50 for 2 nights.  Some nice pics of wood floors and nice beds there…  my room however did not look like that.  Breakfast was included although I never had it there.  My room had old looking carpet and seemed dated.  I believe you can escape taxes/get lower rates paying cash, however I did not do so.  My bill was a bit over 1600 pesos and my Chase transaction is $190.56 – kind of balances out the fantastic deal and stay I got with airbnb as mentioned in my airbnb in South America post.  I specifically recall the taxi being 390 pesos from the airport, which posted at $46.30 – so Chase was definitely using the official rate.  No bueno.