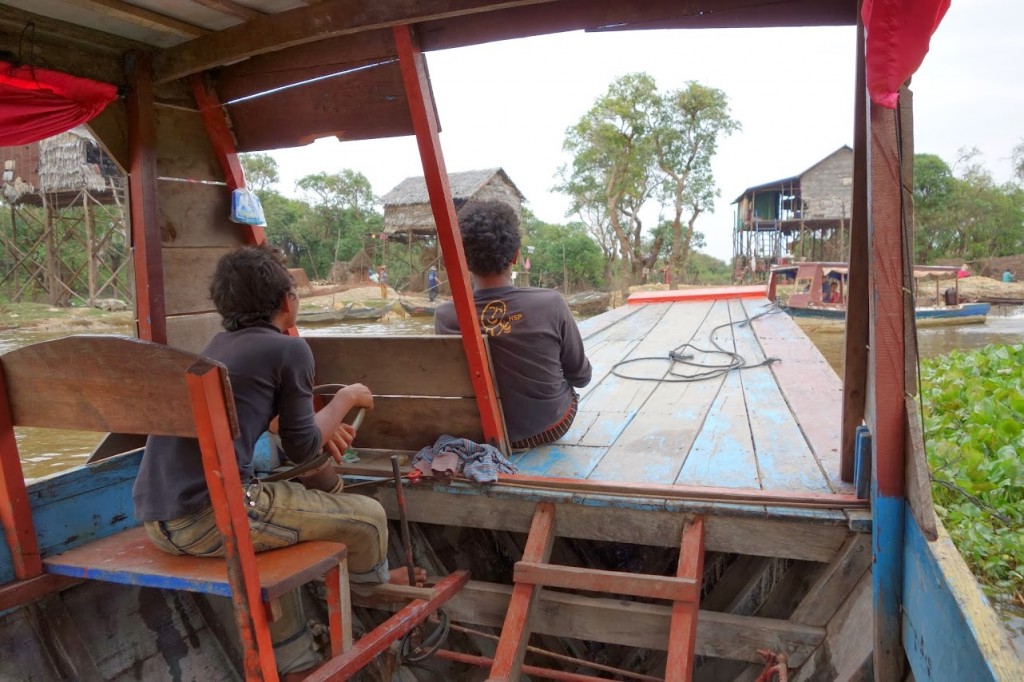 There are a few floating villages noted on tripadvisor – our driver thankfully took us to this one as the others have rather poor reviews.  So 1. you want to go to this one and 2. you want these mischievous kids as your drivers, well, at least if you are us.  The tripadvisor entry for this site is here.

As all adventures out of town start, we were out in dusty Cambodia with our tuk-tuk driver Girath, or “G” as he went by.  Unfortunately WAPOW we busted a tire on the road to the way there.  So out in the middle of semi-nowhere I did what any American tourist would do, I took a picture of the tire and uploaded it to facebook.  Thankfully we weren’t far from a small village, or at least a set of homes/stores, on the way.  Here’s a pic of G and a guy fixing the tire. 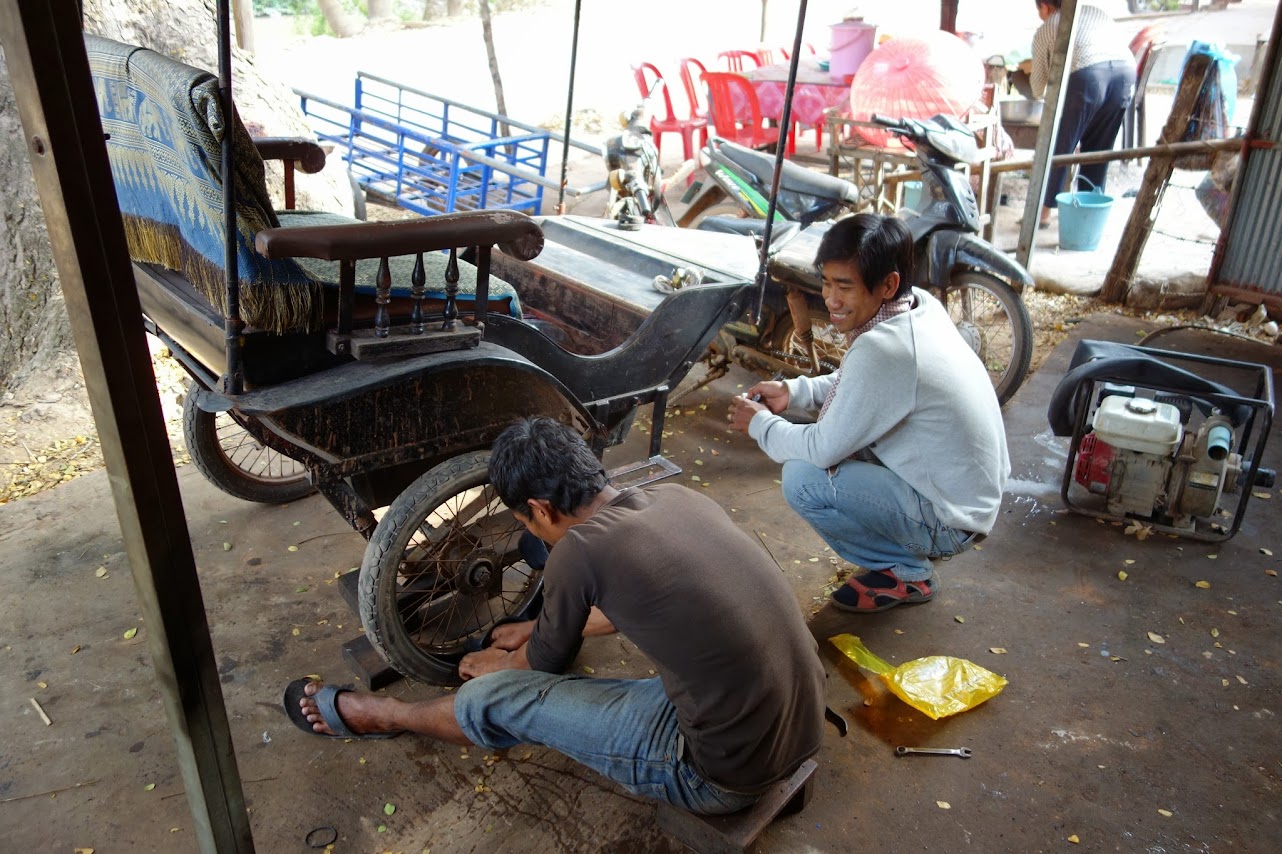 We got to the ticket counter and also saw the highly visible Transporter Audi tuk-tuk guy.  Good shot to show how the dirt roads look.  On the way here the road was actually a pretty big mess in some places, not sure if we were better off in the tuk-tuk or the tours in the buses – they had better suspension but more than one appeared to be having some challenges actually getting down the road. 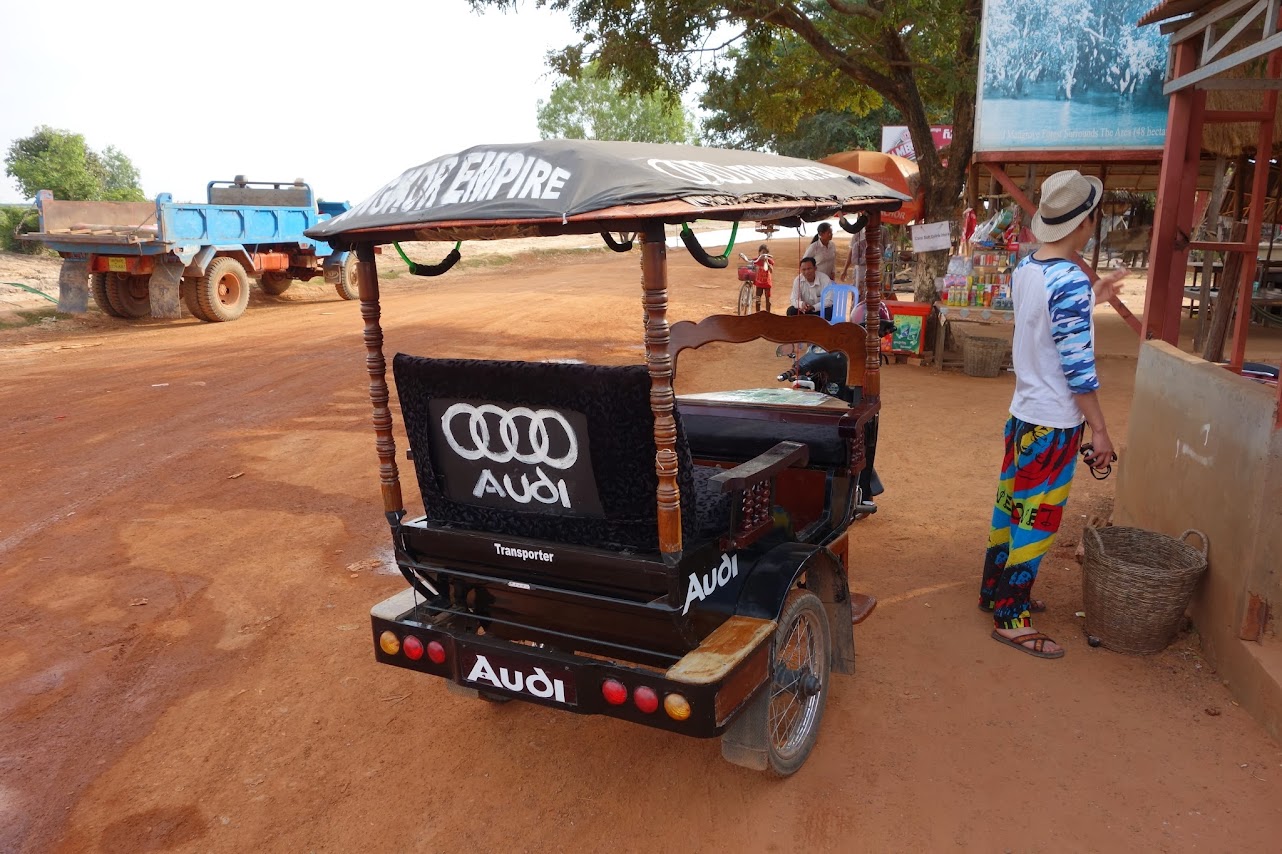 Paid for our tickets and off we went to the boats.  I was expecting to get some type of English speaking guide on a boat shared with other tourists.  Instead, we got some little badasses, who didn’t speak any English.  I dunno how old these guys are, what, 12, 13?  When G handed our tickets to these guys I figured they would be bringing us to some sort of adult, instead of guiding us right onto our own boat with them at the helm.  I was with my buddy Josh, who grew up in the same neighborhood as me and who grew up pulling all sorts of neighborhood hijinks with my younger brother.  Josh and I were both thinking the same thing, that these guys reminded us of them growing up together…  video of us meeting them and getting on the boat:

I decided I’d happily enjoy this without anyone really telling me what was going on or what I was looking at.  We set out on our trip. 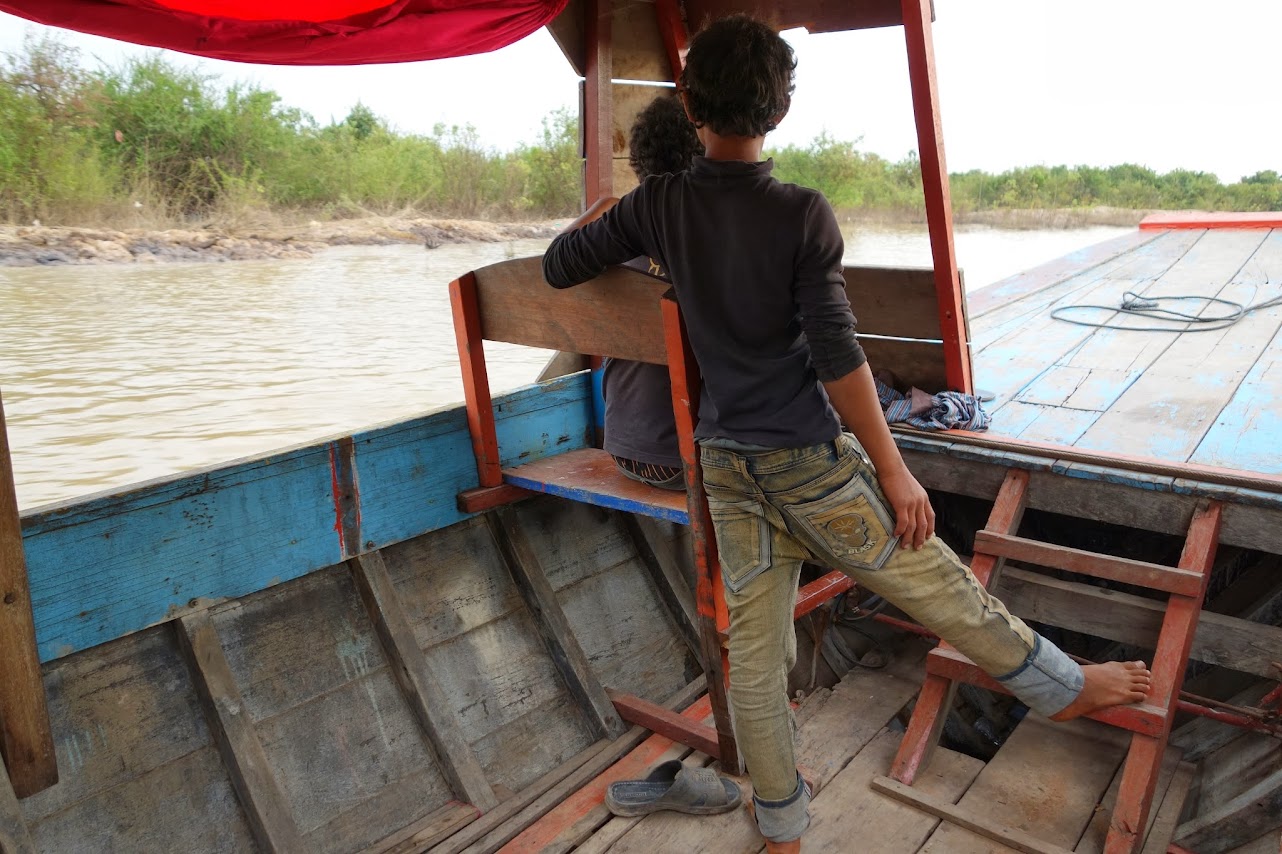 Not soon after, they offered up to let me drive, and I think Josh started laughing about this almost immediately… 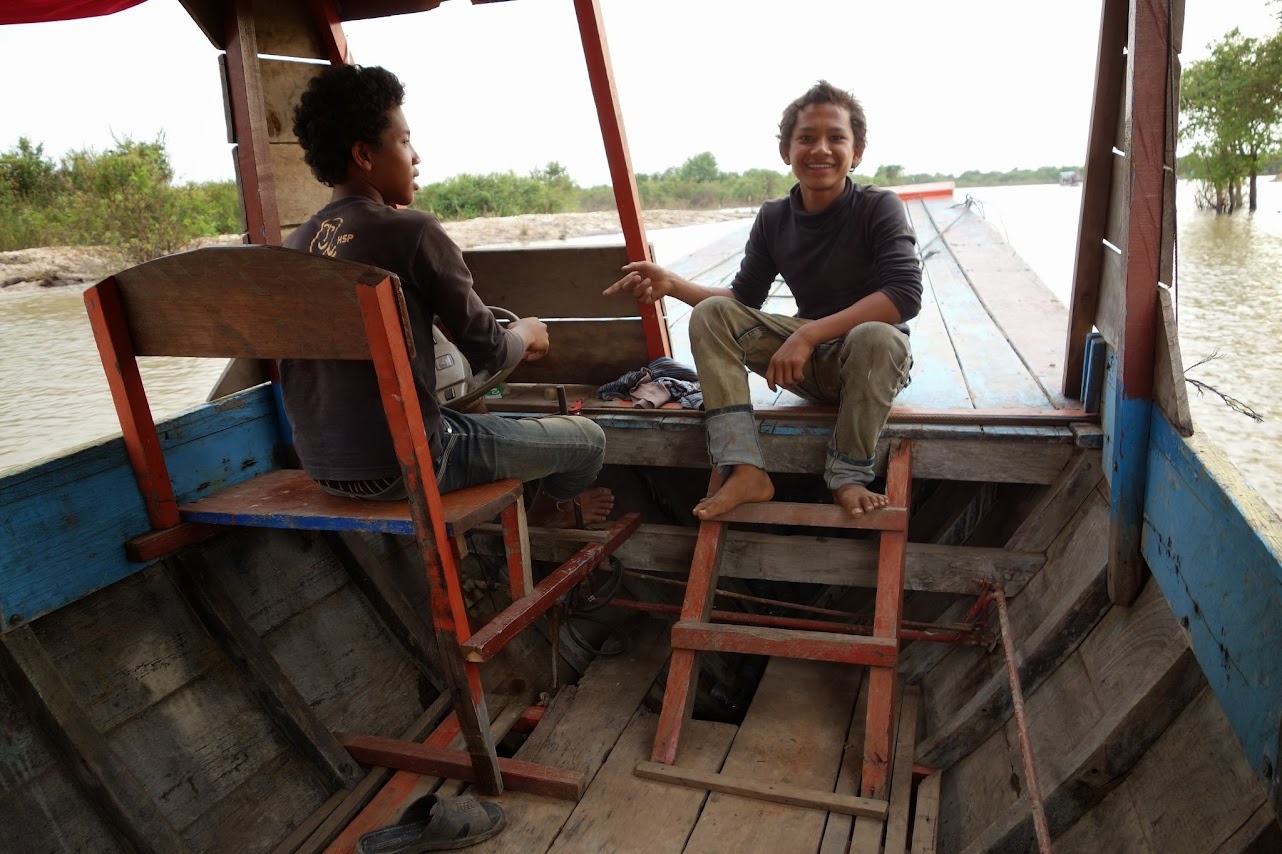 I had not driven a boat since a jet boat when I was maybe 16?  Even then I remember my dad freaking out saying I was heading right for some wall even thought it was fairly far away (at least, that’s how I remember it…) we eventually got another boat which I went on zero times, it was really more of my brother’s thing.  The river was definitely more narrow than any area my dad was worried about me driving into a wall and the only thing I really recalled about driving a boat was that it took constant adjustments.  I didn’t crash or anything, so that was great.  They took a pic of us with my camera. 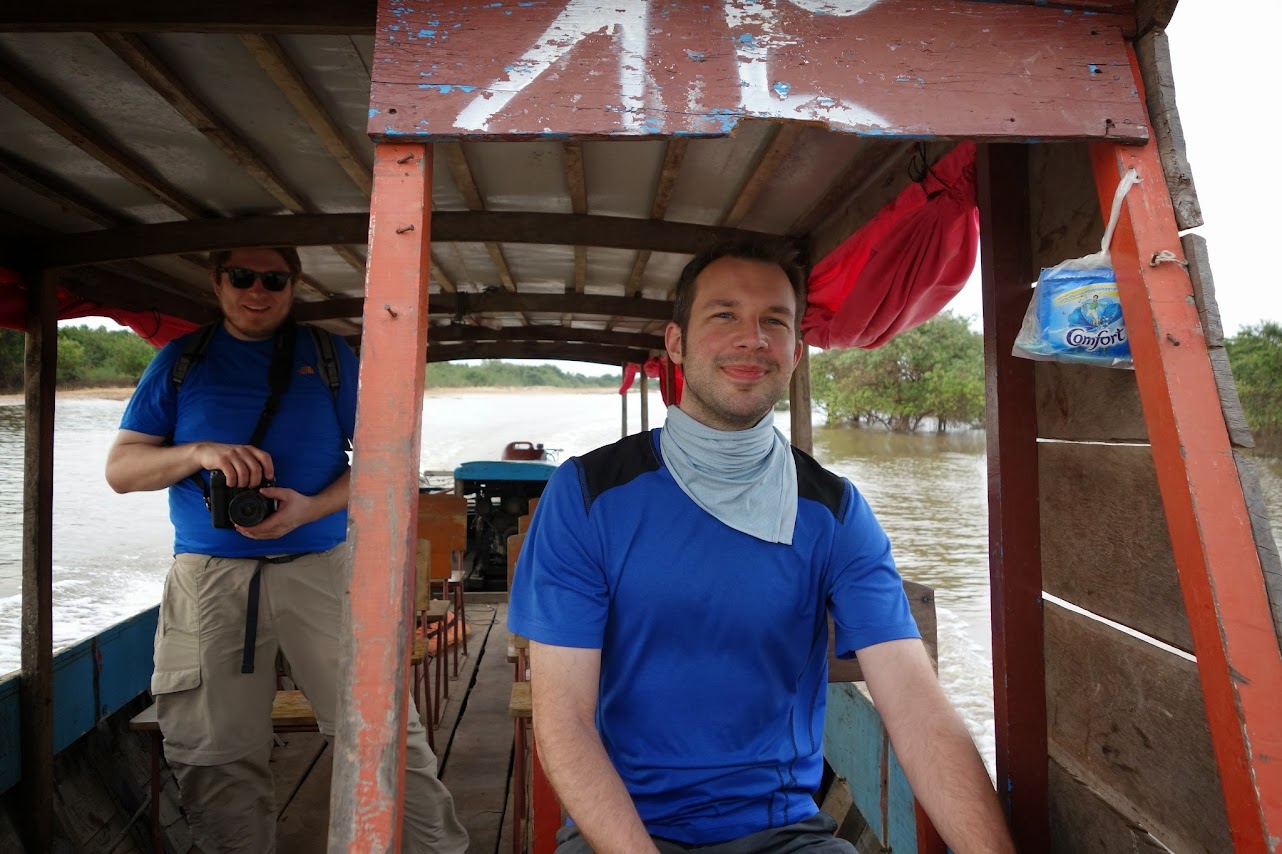 The floating village was pretty interesting to see.  Hard to imagine for me living life on the water like this. 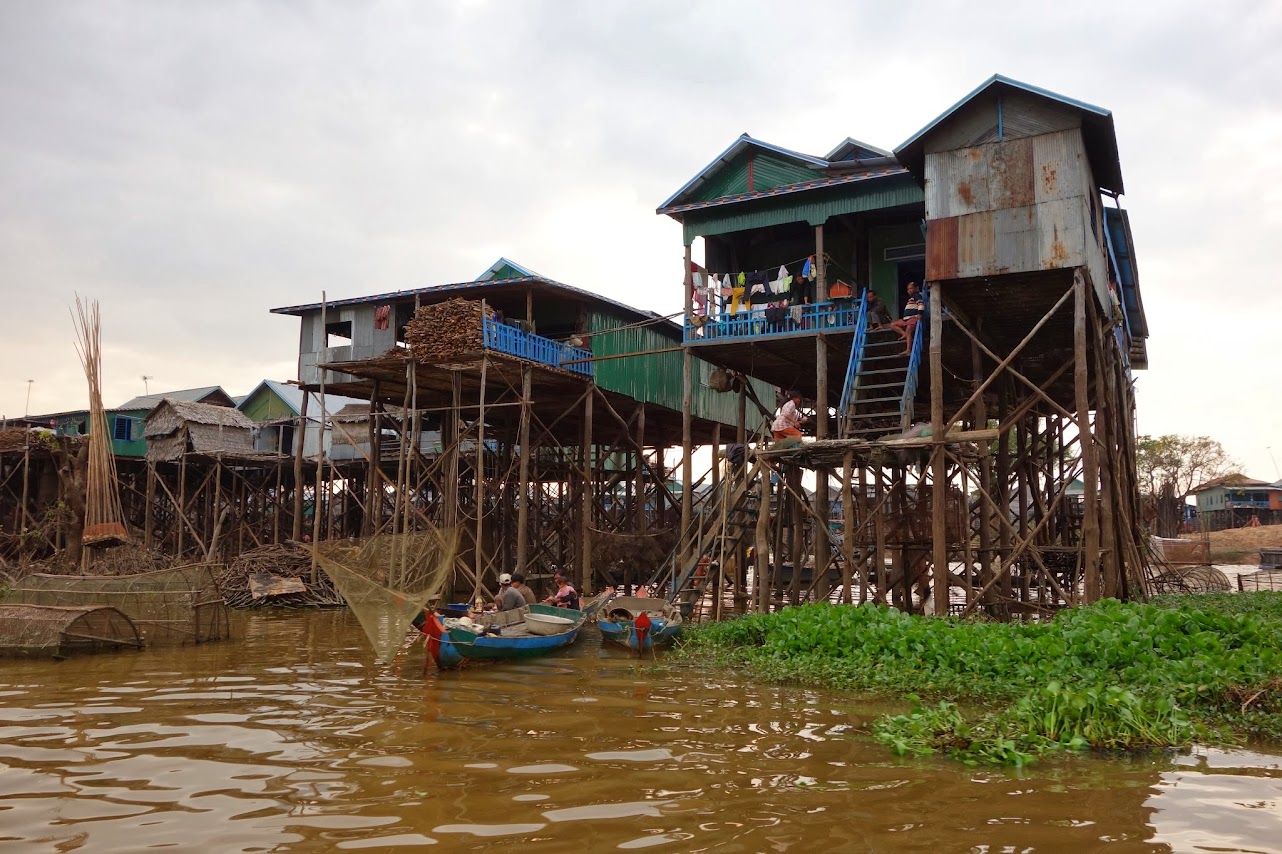 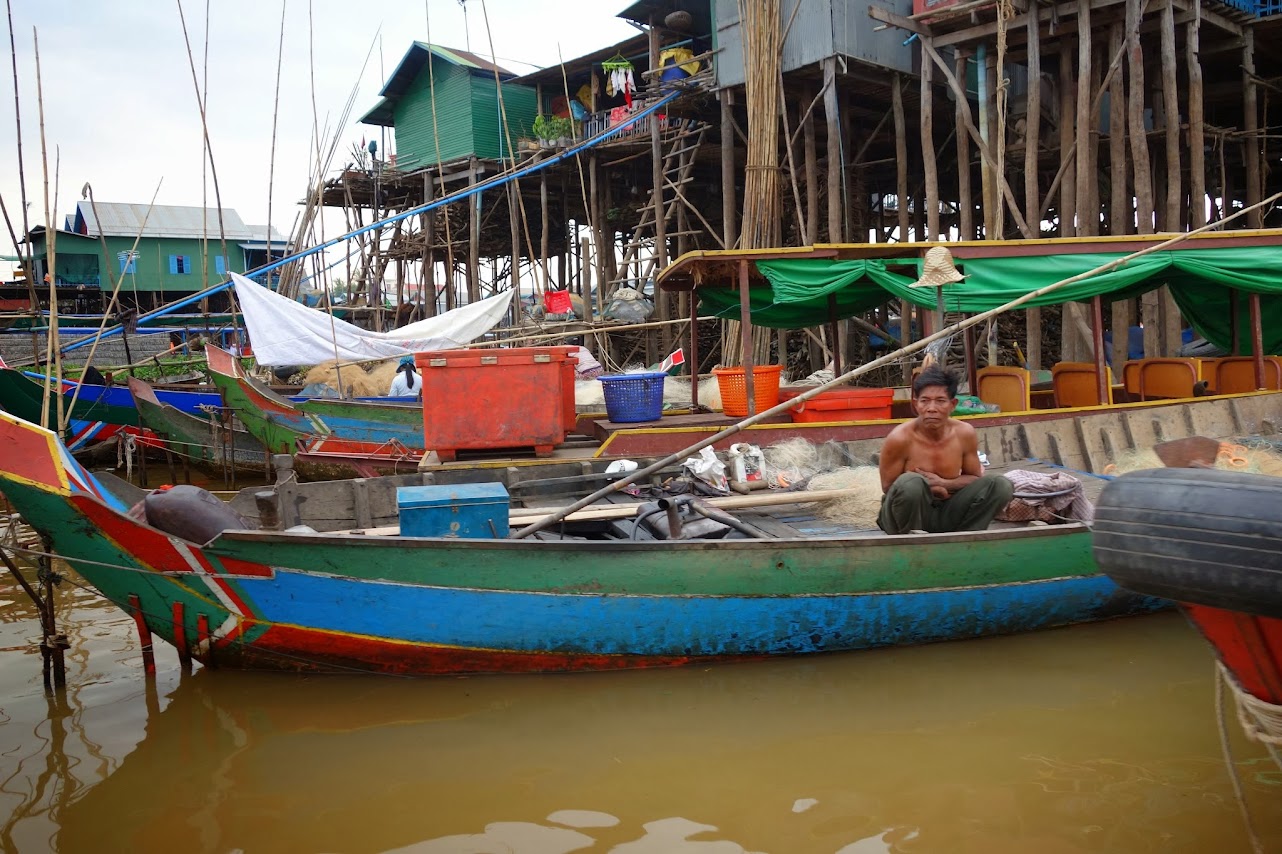 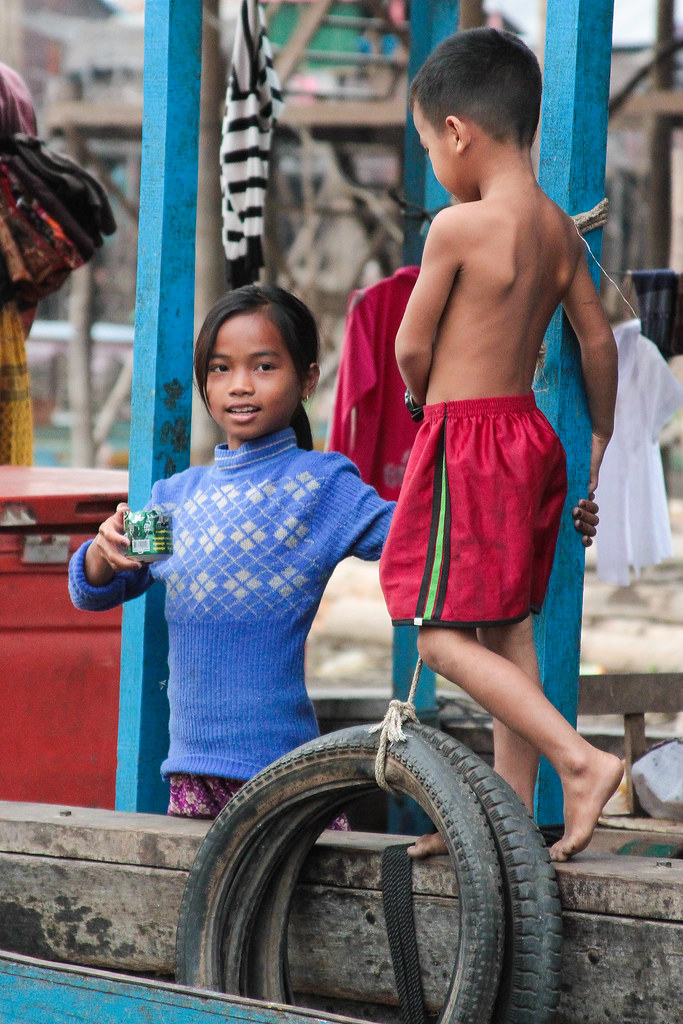 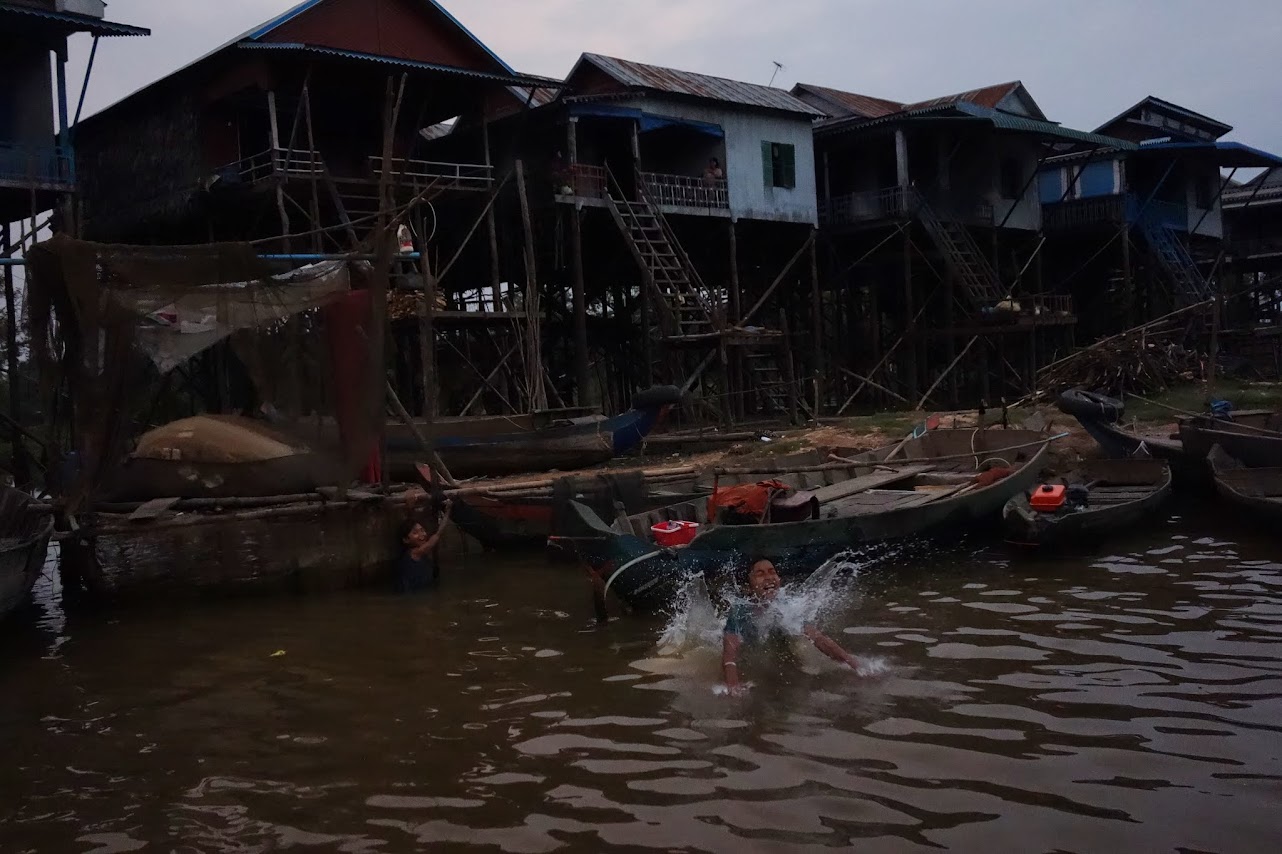 The kids brought us to one of the boat restaurants.  I’m sure there was a kickback because there’s kickbacks for everything there.  We got some food.  A boat was available to rent and hop in to paddle through some mangroves.  We didn’t do this, or any of the elevated hiking trail that we saw on our ride back either.  This restaurant had a very sayed, sayed black kitten.  He kept crying, and seemed pretty fragile.  Everyone was kind of ignoring him and I tried to give him a piece of chicken from my soup after it arrived, although he just ignored it.  What made that more fun is that it was done very awkwardly in silence while everyone watched me get up to give the kittay some chicken for him to totally not care about either!  I think silence broken by Josh laughing at me.  Here is the poor little guy…  I’m not sure if he is still with us today. 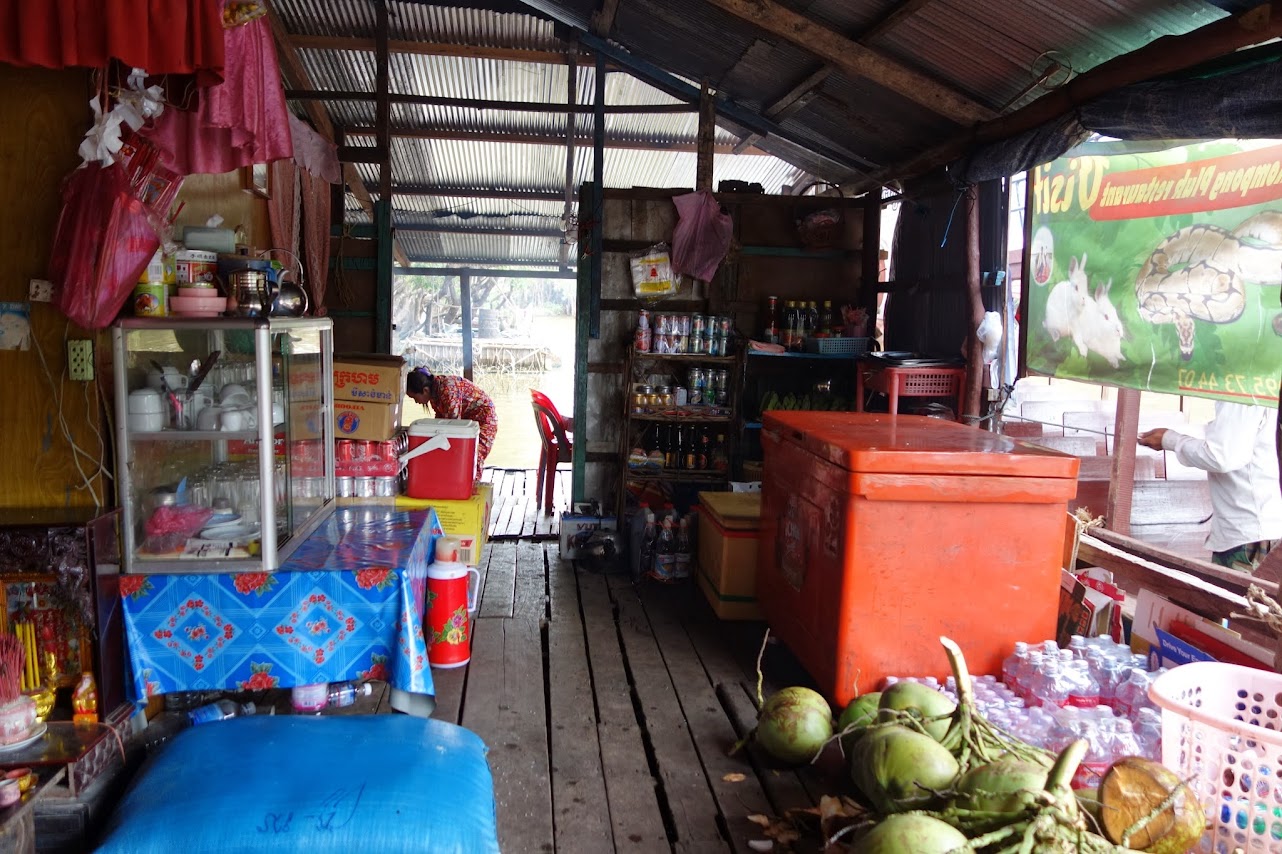 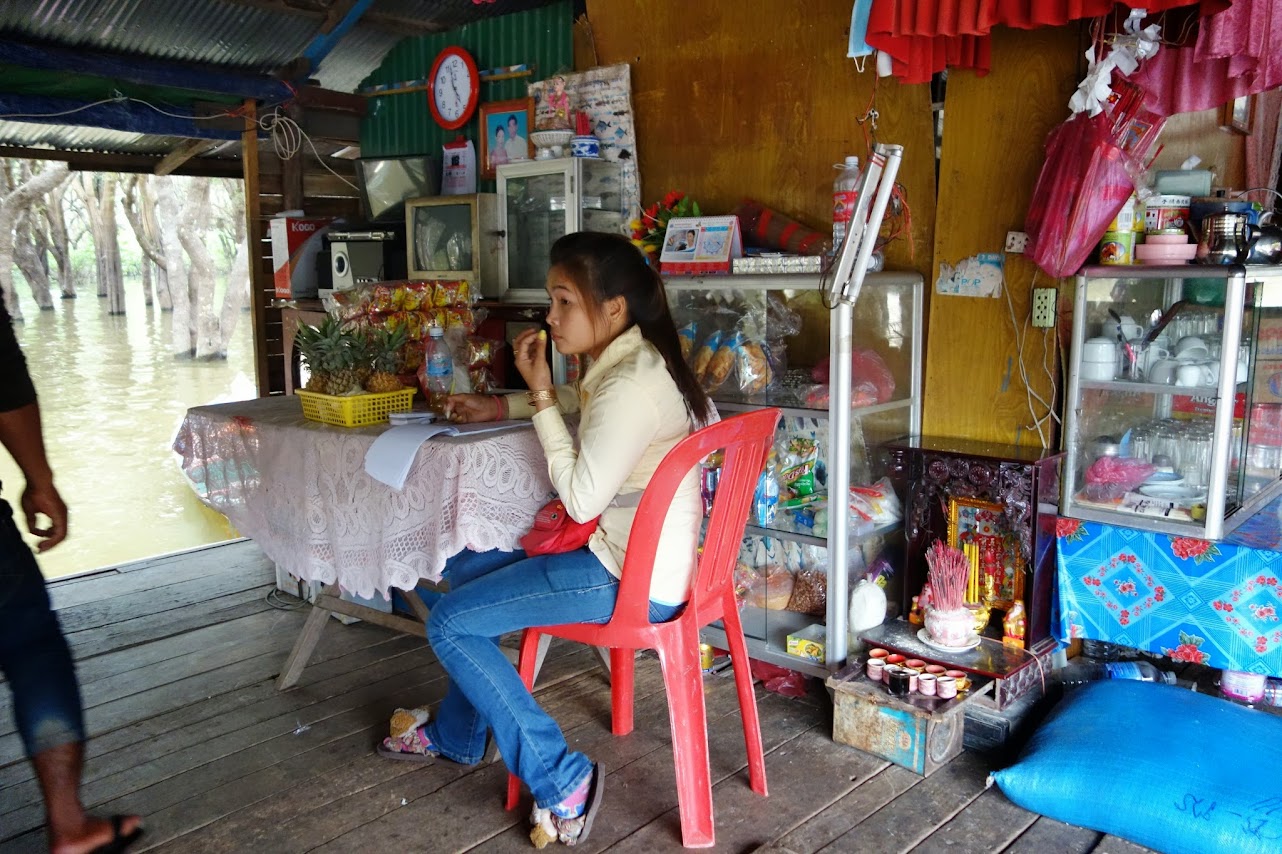 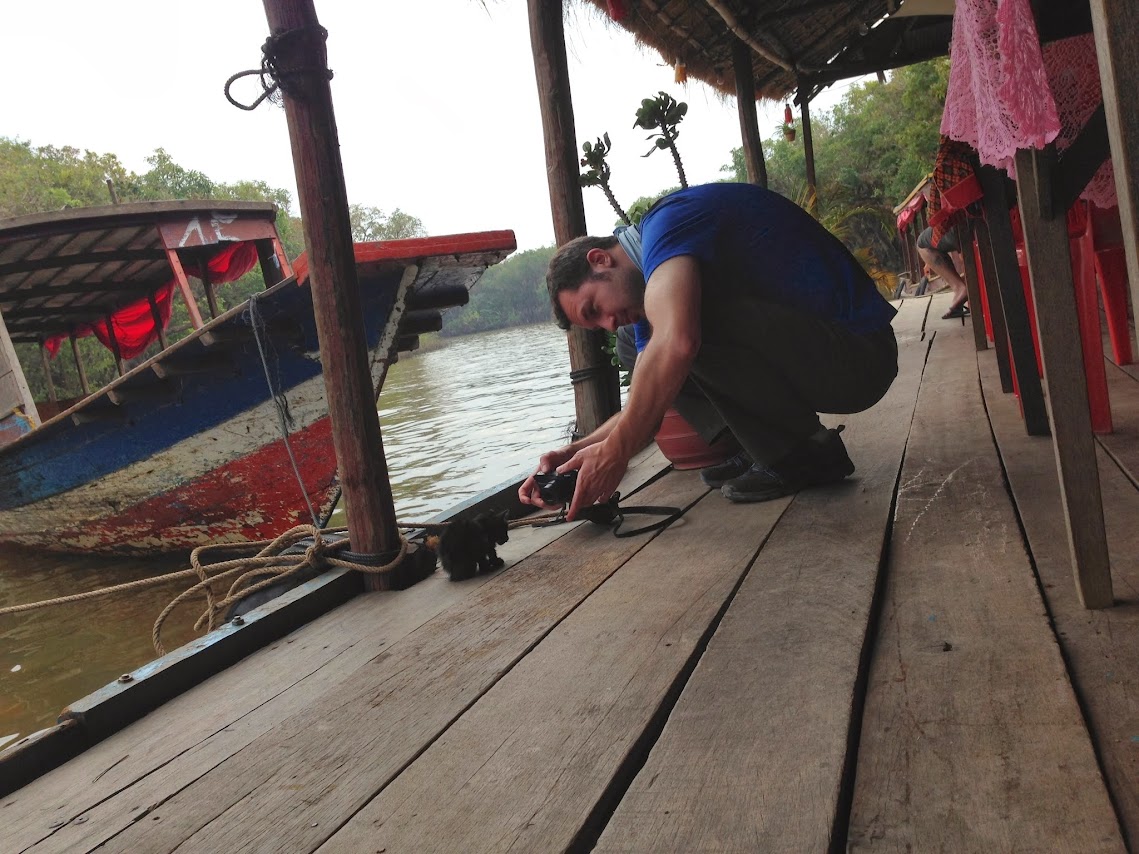 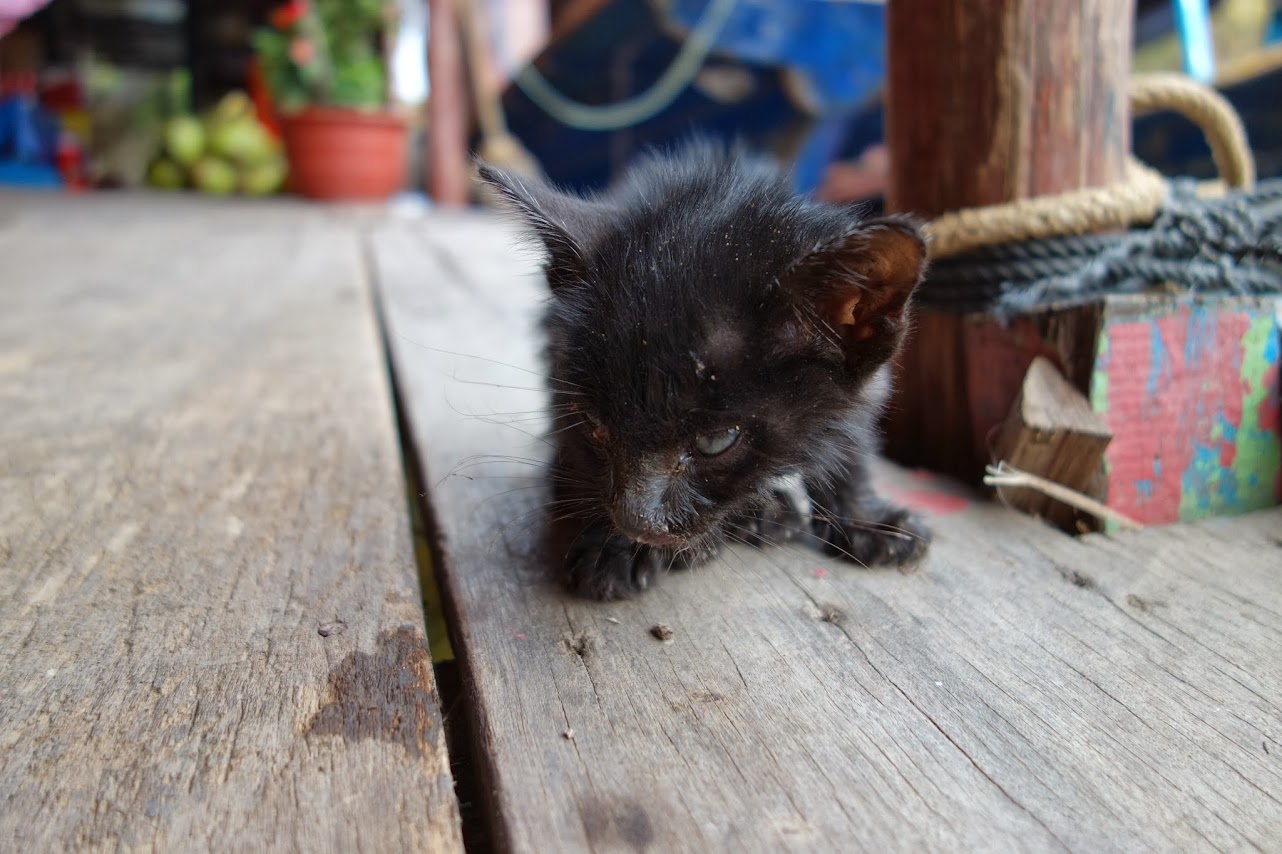 Boat dog and some more pics – 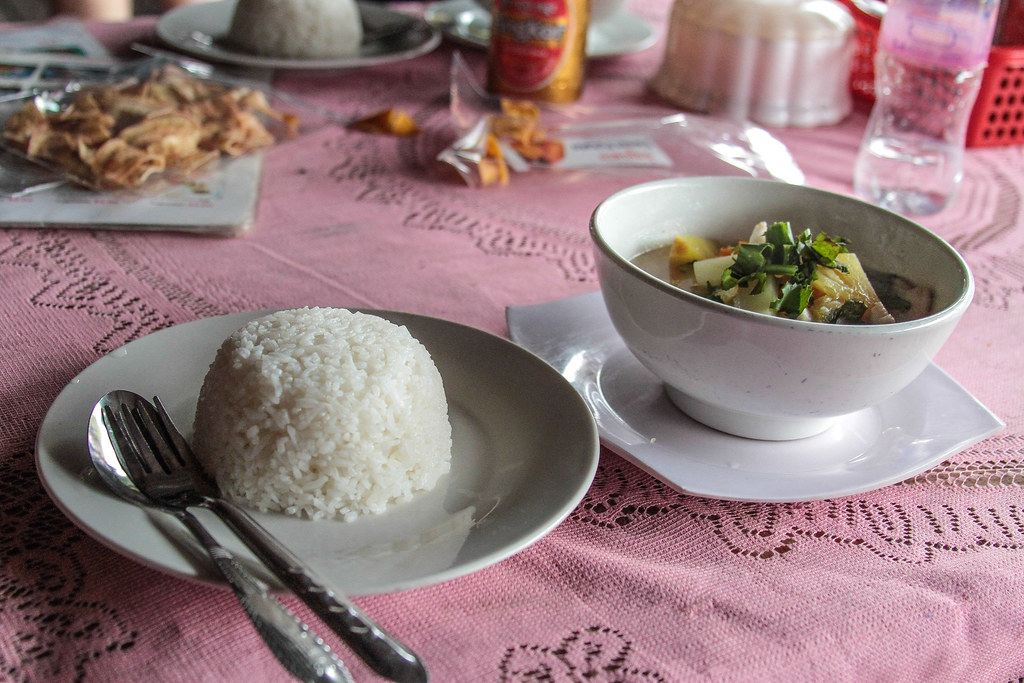 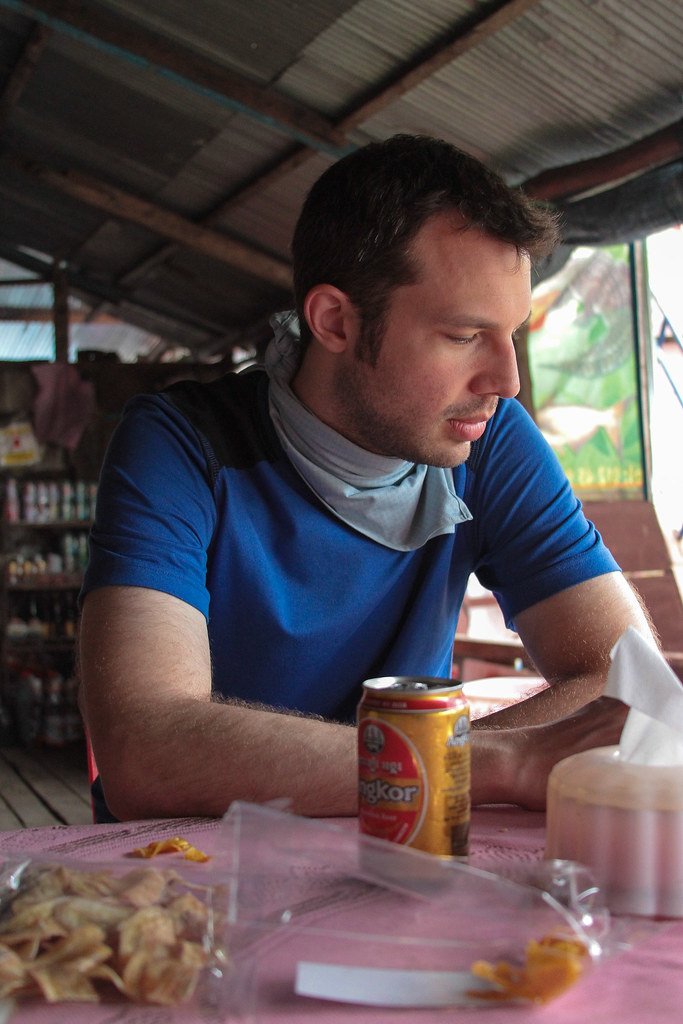 We got out to the lake (Tonle Sap) and stayed for the sunset and long enough for someone to drive up to us and sell us something ‘for the children’.  This is where the real fun began – after we got through the village, the kids started cruising – pushing the boat as fast as they could get it to go, which really made me think of something Josh and my brother would be doing…  it was pretty fun and we were cruising by at a good clip.  We flew past other tour groups with shit eating grins on our face, I think a boat full of maybe Aussies and then another of Koreans?  It was pretty fun flying right on by them, at least until we got too close to the slides and flew well into some muck!

While the kids were trying to free us, the first boat caught up to us and then went by… and then the next…  we were stuck pretty well too, I didn’t want to jump out in the water and muck but I was starting to wonder if we’d need to.  Eventually we did get out of there though, then on to more cautious driving…?  Ok no, not really.  We were back in business, time to move!  We were back up to top speed in no time, shit eating grins back in place.  We blasted by the first boat and then the second again, haha, suckers!  This was going swell until… the same thing happened again, fast into the muck we went.  Thankfully not as well stuck as the first time, but stuck long enough for both the other groups to catch us.  All passing up until this point was done in silence – this time however, as we were overtaken, we were met with overwhelming laughter.  Both groups while coming up apon seeing us run aground just burst out in laughter, and we couldn’t do anything but the same thing ourselves.

I’m still here, so we did eventually get unstuck and back into town.  I recommend checking out the village and boat trip, as well as our crew if you’re up for a little excitement!