I pretty much equate Chase Ultimate Rewards (UR) points with United points – although they transfer to other airline partners as well.

Korean Air actually has some sweet spots for travelers from the US, at least if certain criteria are met.  Let’s take a look.  I’m by ORD which is a good hub city to be in, but particularly for Alaska Airlines and Hawaiian Airlines it’s probably even better to live on the West coast.  What looks good?

Regarding the March note, these awards did not change in price on the newer award chart I should have taken a screenshot of instead.  Comparing to United, with both their birds and partner alliances we have:

A potential bonus here is also that Korea is a part of the SkyTeam alliance, with Delta being the major player of this alliance.  Thus far in my opportunistic points hoarding life I have pretty much written off Delta (and their partners) given my hub city of Chicago as well as their now revenue based awards program and lack of ways to accrue big points through credit cards.  However, Chase to Korea provides good access into this alliance at a good price point – and likely with much less competition for award seats.  Korean will charge more points during peak season (last two columns are date ranges) although these seem like minor areas and date ranges for the purposes of the above.  Another caveat is the miles can only be redeemed for family members. 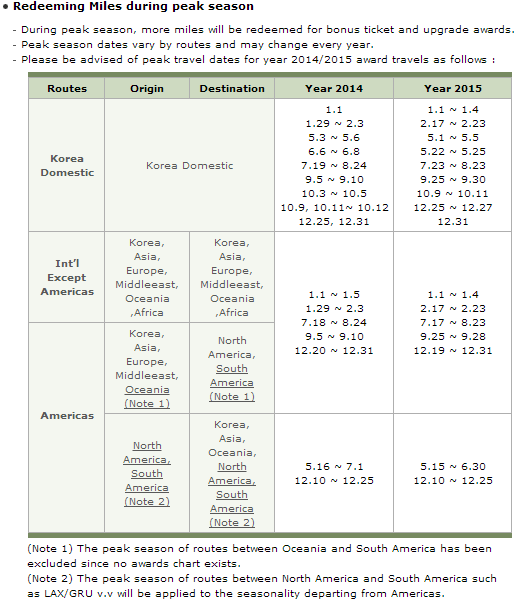 Korean Air’s site is not very good for searching or booking award space, which would be done over the phone.  The process per Lucky is

This all seems a bit of a pain in the ass compared to other programs, however it could certainly save a few points.  Korean Air however does pass on fuel surcharges for award tickets for their SkyPass partners (although not the non-SkyPass partners of Alaska and Hawaiian.)  This could be an ugly amount of cash to cough up for an award ticket, although particularly in a premium class, likely worth it.  Korea is 10,000 less miles than United to Europe in economy – but what if it’s an additional $200 in fuel surcharges?  That would be like $200 / 10k miles = buying 10k miles at a cost of 2 cents per mile (cpm) – hardly something I would do.  What if the fuel surcharge is $400 to Europe?  Korean is only 80k – 35k less than United if the availability is even there – a massive 60k (a whole trip) less than an alliance partner through United.  $400 / 35k = 1.143 cpm; $400 / 60k = 0.66 cpm.  Both are probably worth it; the latter clearly is worth the points savings.  Some other rules:

I have yet to do anything with Korean Air or the SkyPass alliance, and all the hoops to jump through for Korean seem a bit of a pain.  Nonetheless an interesting transfer partner to consider for Chase that can offer some savings or possibly really great values if the right flights are available in your area.