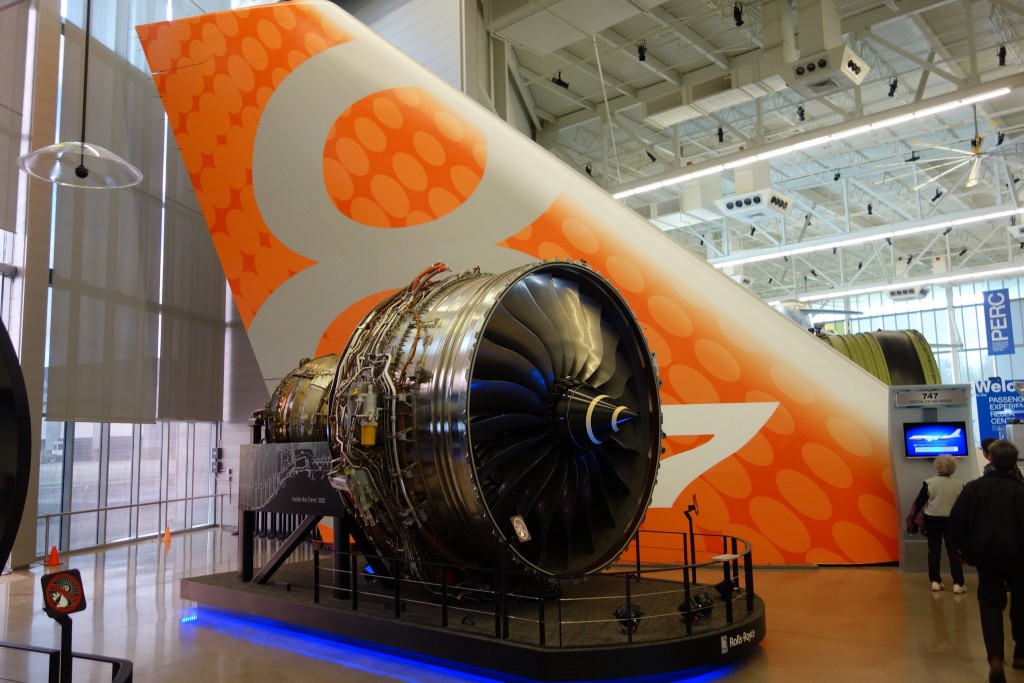 I visited the Boeing factory in Everett, WA – just a short 30 minute trip from downtown Seattle.  For my car enthusiast readers I’ll note that Seattle is also home to Dirtfish Rally School in Snoqualimie and a couple hours away Sima Racing in Sumas, WA near the Canadian border – not only that but there is an indoor karting facility a few minutes from the Boeing tour at Traxx indoor racing.

The tour starts out at the Future of Flight building, unfortunately the only area where pictures are allowed.  The amount on display is actually pretty small but interesting; you can sit in the cockpit of a real 727, see some of the massive engines used on the planes, and learn about flight theory and construction material that go into the 787.

The actual tour does not allow camera equipment of any kind, including cell phones – they are not even allowed to be turned off and on your person.  So after any pics in the Future of Flight building, they should go back out to your car or in a rental locker at the entrance, which cost a dollar.

The tour is about 90 minutes, and it includes no bathroom breaks as the walking areas appear to be far from the actual restrooms.  That being said a bus is used for some short jaunts and it did appear to have a lavatory inside.  Boeing notes that the tour consists of a bit of walking as well as some 1960s era shallow stairs as detailed on their website, although if these impose a challenge they have some alternate paths to accommodate all who wish to go on the tour.

The tour is across a massive 6 bay building; the largest in the world by volume.  The first 3 bays were built to construct the 747 and the next bays for the 767 and 777.  The 6th bay is now used for the787.  We got to see all 4 planes in various stages of construction and learn how they are assembled.  Smaller planes for more domestic travels such as the 737 are built at a different facility in Renton, WA.

It was really cool to see how these big new birds were pieced together and the massive scale of the whole operation.  The 747 takes over 6 million parts and was described as one of the most complex assemblies of anything to date.  It is still their largest airplane and does double duty carrying both passengers and freight.

Chicago apparently does not have a proper gate setup to accommodate 787 Dreamliners so what I fly most often from there on international trip are 773s or 777-300s (same thing) – and it was cool to see them being built as well.  Each plane has a large banner on it displaying the airline it is for, the model of plane, and the nth number it is from the airline on order.

The fuselage of the 787 is built in 4 parts, using a lot of more advanced materials including a significant amount of carbon fiber.  Parts of the plane are flown in from other sites where they are constructed, carries as cargo in a modified 747 called the Dreamlifter.  The factory of course is situated next to an airport (Paine airport) with 3 runways of which it leases 1, where we did get to see the Dreamlifter take off after delivering a part – it’s quite a massive plane.  Paine airport serves the most private planes in the state of Washington, and it was noted that although Boeing is responsible for only 2% of the flights, it is also 98% of the weight! 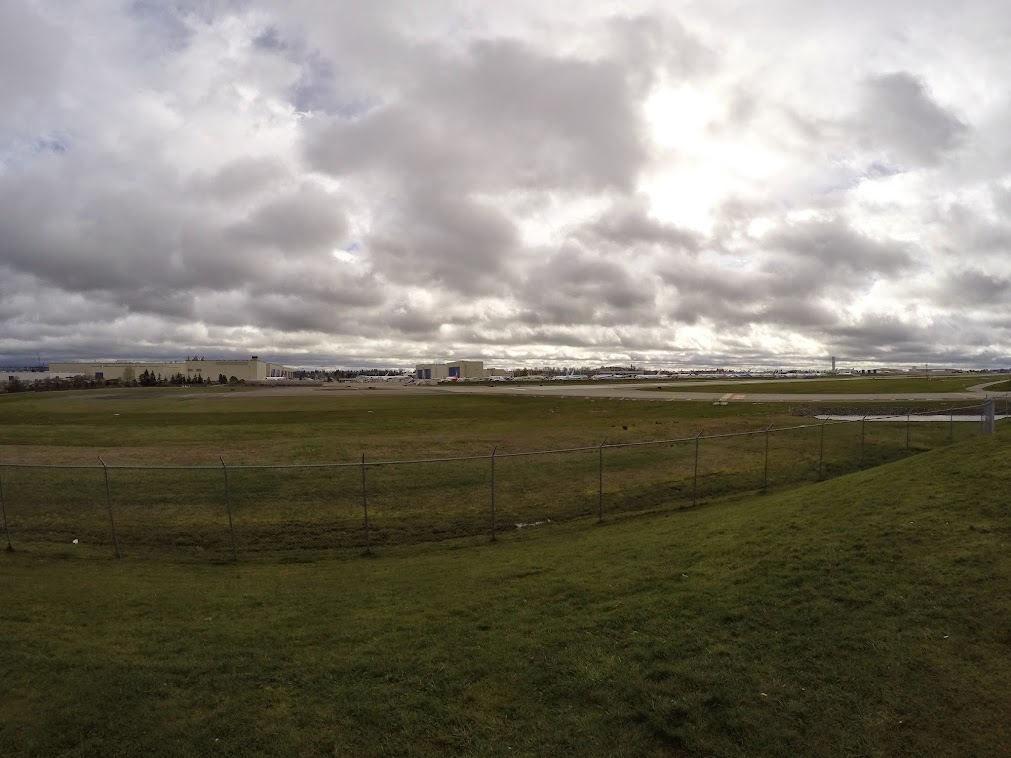 I’ve only got a far gopro pic from the Future of Flight parking lot, but it was really cool to see all of the planes getting ready for delivery around the facility, painted with the livery of airports all around the world.  There were many 787s; destined for Air Korea, Emirates, Ethiopian, American, and so on.  Really cool to see!  Boeing takes them up for two test flights in many different conditions, and the airlines send their pilots to come pick them up and fly them back home.  We were told it was custom for them to give a little wave goodbye…

If you’d like a 787 the good news is the pricing sounded quite good for a brand new plane, particularly one that is super efficient!  The bad news is there is already a 10 year waiting list, so you better get in line soon.

Unfortunately not a lot of pics from this one, but a very cool site and tour indeed; I recommend checking it out if you also go by plane.

One thought on “Going On The Boeing Factory Tour”