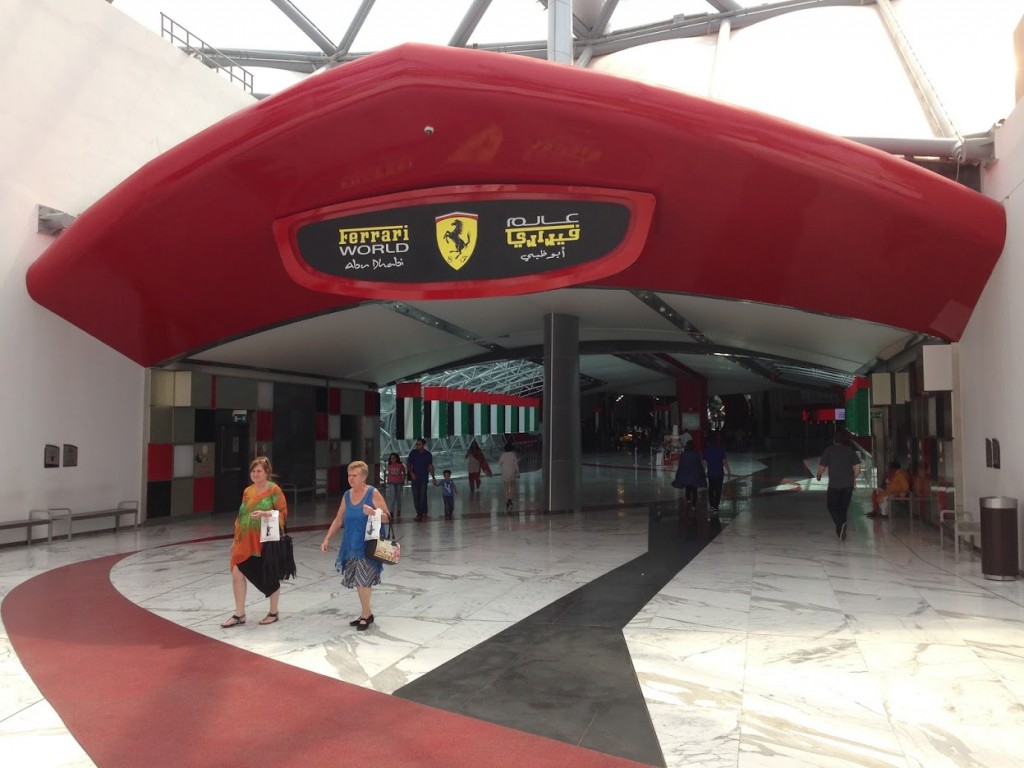 My buddy Josh and I visited Ferrari World last year. I went again this year, and they do have a new coaster open which people seem to enjoy – but I really just came to see how much karting I’d have to do to get my money’s worth out of the entry price. I was also hoping to take some awesome video this time, because they have pretty perfect karts for drifting fun.

As noted in my previous article on them, they don’t really have a great turning radius, and you really have to throw or slide them around the track to do it right. The top speed of the (electric) karts is relatively low too, but you aren’t hitting it too often. The fun is really in tossing them into corners, and in that regard, they are a ton of fun! They are relatively predictable and easy to control too, at least for drivers. On the other hand, you have plenty of people trying out karts here at Ferrari World – and plenty of them are just terrible. They may not have done this type of thing before anyway and be apprehensive about it, which I can understand, but there are some people that are just awful. Like they literally exit the pits and immediately crash into the wall on the first turn and require help, before the race even starts or everyone else has exited the pits. I saw it multiple times, pretty sad!

The races are relatively short too at 5 minutes – Ferrari World is trying to cycle a lot of people in and out. I’m not sure if they stop the time when a race gets stopped – I don’t think they do or don’t add much time – which is unfortunate as people get stuck who were not paying attention to any instructions and need the aid of staff, who rather than just pull them out of a situation, will just repeat the instructions of what to do until someone gets it. Basically, this means that a lot of people learn how to reverse on the fly and on the track instead of in the pre-race classroom session, and these people learn at the expense of everyone’s race time.

I got there about 2pm on a Sunday (first day of work week here) and was surprised to see my wait to drive would be so long. You have to sign up for a time to race the karts – and you can sign up multiple times – I ended up with a driving simulator time of 4:12 and a first kart race at 4:47. So I had to hang out quite some time before getting on track.

Plenty of time to walk around and marvel about how cool the place looks, and some of the toys they’ve filled it with.

As noted in my last article, it felt like there was a lot of light pollution which made it hard to drive the advanced simulators (expensive and an additional cost) – seems there is a screen that can be leveraged now. I eventually drove my normal simulator time, and did pretty well – at least on the part of the track I am more familiar with, the “Yas North” – I didn’t play around with anything long enough and have never drive full Yas so it is more of a challenge. Videos of the simulators can be seen in my first visit to Ferrari World.

Lookit that slick track yo!

I noticed the times before driving seemed faster by many people than mine last year – so I went and checked and they indeed were. My theory here is that times are coming down as more karts and tire lay down material on the surface over time and the track gets more grip. I easily beat my times last year, and I would say I felt more in control this year – could be me, could be the track surface, probably a mix of both though. With all these times being lowered I think the track surface getting grippier is a solid answer.

Unfortunately – no video. I even brought my own helmet – wondering how many dorks do that? I didn’t bust out the racing gloves here though. None of my video rig unfortunately. There are GoPro mounts on most (every?) helmet here, and some on the cars. The staff was all very nice, although I got different answers of why I could not record. Things ranging from having to buy a GoPro from the people there, to having to rent one, which included the video of you and cost something like 95 AED (over 25 USD!) – none of these were real options though, because whoever actually does the GoPro stuff wasn’t there. Maybe they weren’t there because nobody pays that much? I don’t know. Multiple people there reached out to higher ups but I kept getting the same denial. Everyone was very nice and totally on my side but nobody could make it happen.

I later complained to Ferrari World via e-mail; after a couple days of internal talking it appears, they offered me complimentary voucher passes but stated the taping was not allowed due to safety reasons. These karts are actually really pretty slow, what makes them fun is the angle at which you are driving and taking all of the turns. Which I thought would show up really cool in video too. Alas the policy is in place and there seems no challenging it at this time for a mere mortal. I will happily accept the vouchers, but bad policy is still bad policy. There is no real safety risk here to be concerned about, and it’s really unfortunate that I and others can’t take video of what really is such a fun and cool track. I have yet to be anywhere else that offers a karting experience quite like this.

Similar to the last visit, I was able to come in at the end of the day and try to jump into race groups as 1 person filler as people did not show up nearing the end of the day. The time to really start trying this is the last hour of the day. I met some cool guys in line, both oil drill engineer supervisors – one being the dragon eater! They later gave me a ride back to my place after we went out to dinner together, and I had a fun time conversing with them and learning about life in UAE among other things with them. I ended up pulling my best time in the last race of the day, which thankfully had more experienced people in it for a fairly good run.