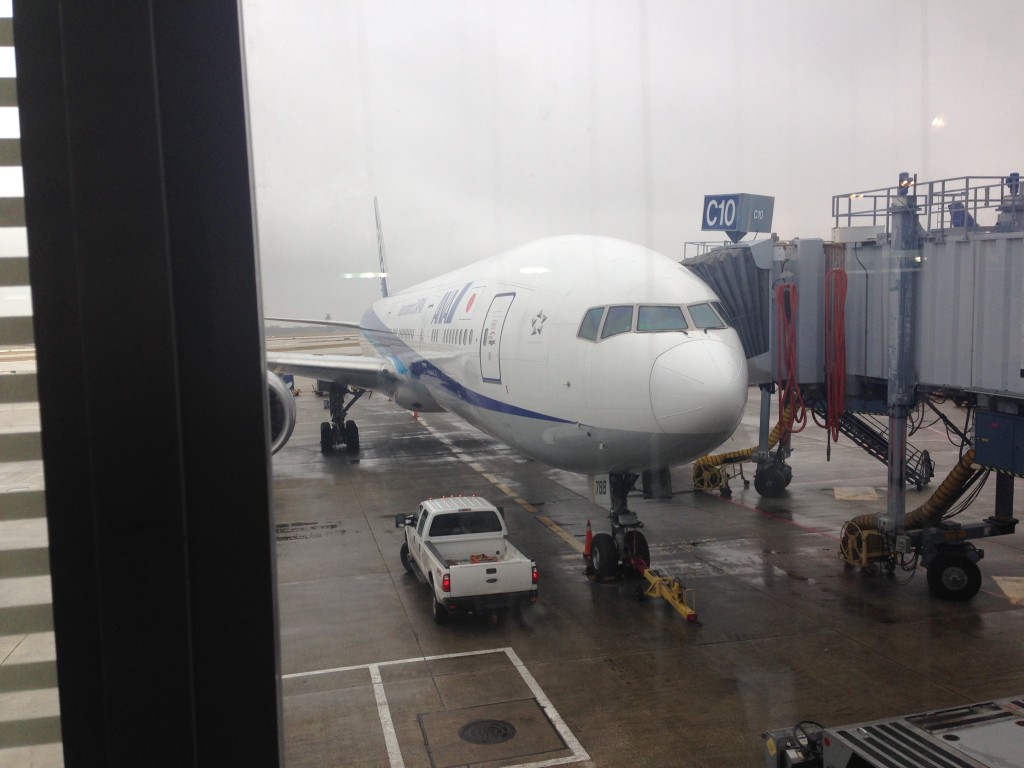 First off, I’ve had a helmet bag upgrade since this flight.  Much improved! 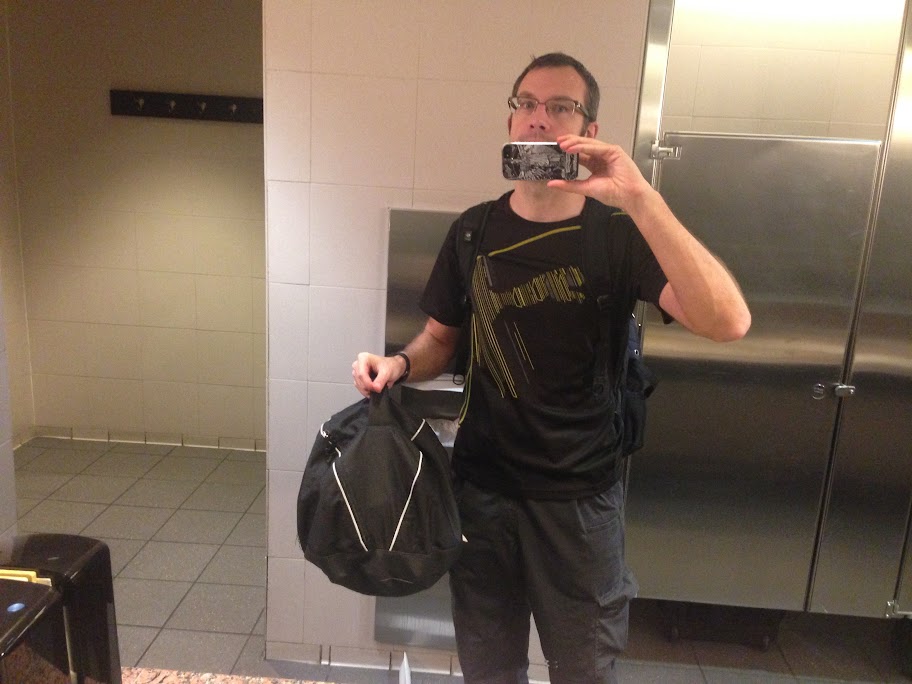 Second off, don’t make the same mistake I did – this flight does not leave from O’Hare’s International terminal 5.  I believe ANA arrivals are here, but departures are all from the mostly United terminal 1.  From the check-in desk, I believe this is the case for Lufthansa as well.  I got dropped off at 5 and had to take the tram to 1.  No pics of the lounge – not too exciting as it’s just the standard United lounge – no interesting international one here.

The Seat and Entertainment

I believe I had the v3 configuration of this bird.  The seat was a lie flat and was adequate for me at 6’2″. I had a window spot in 14K.  For some reason the area felt a little cramped overall to me, particularly getting in and out, vs. flights I recall in the past; perhaps it’s just been too long since I was on one (8 months?) or perhaps it’s a little smaller area on this Japanese configuration.  In any case, the seat was comfortable to be in, and although I was initially concerned at how much space I’d having lying down, the foot area recessed pretty deeply.  The seat was comfortable and I had no problem laying out and sleeping for part of the flight.  Nothing exceptional to say about it, but a good standard lie flat seat. 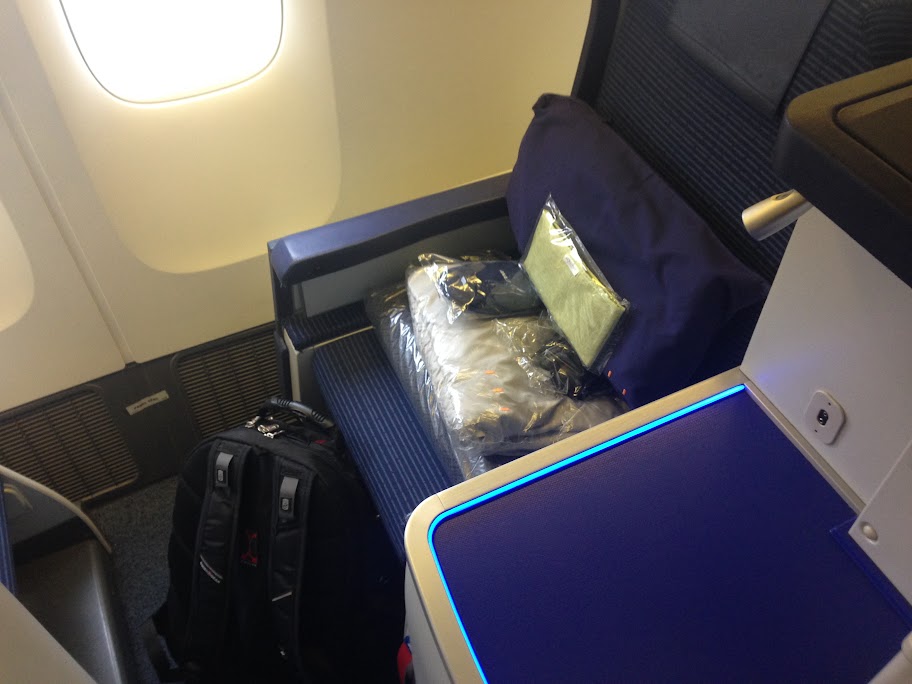 There were a pretty good amount of other seats available left in the cabin.  A nice direct flight it would seem with a lot of award space if you were actually going to Japan.  I was continuing onward to Manila; my 3rd time through a Japanese airport and 0th time getting out to actually see Japan. 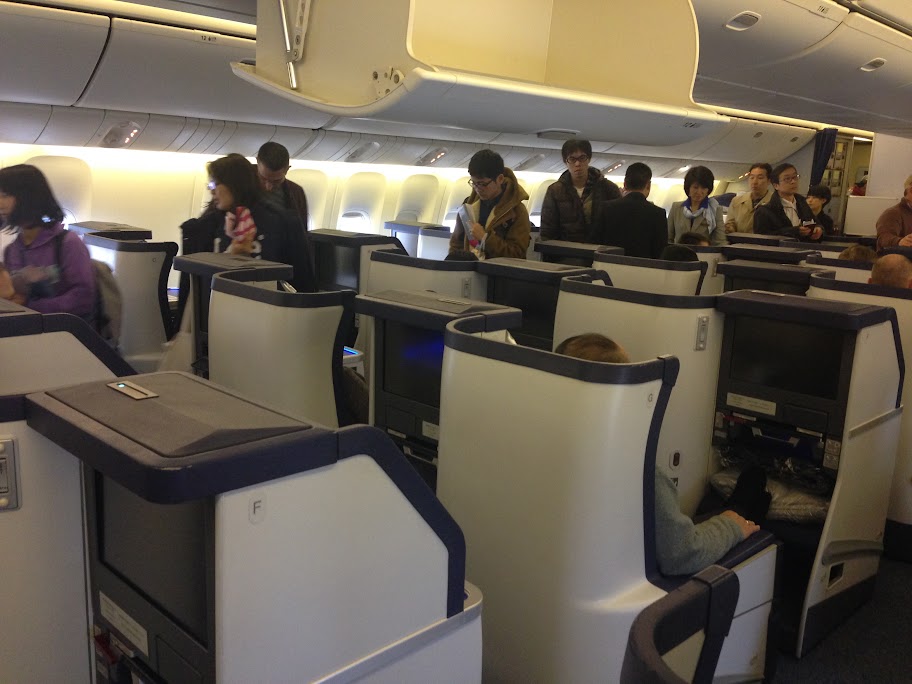 My only real complaint for the flight would be the entertainment display – have had much larger and much better quality.  Particularly poor for darker scenes.  I watched the second Maze Runner, The Martian, and Black Mass.  The Martian was quite good and easily the best of the bunch.  Black Mass was alright, the Maze Runner pretty meh but I saw the first so I figured I’d watch the second.  The characters do a lot of things I don’t think real people would ever do so I’m always a bit annoyed when I see that. 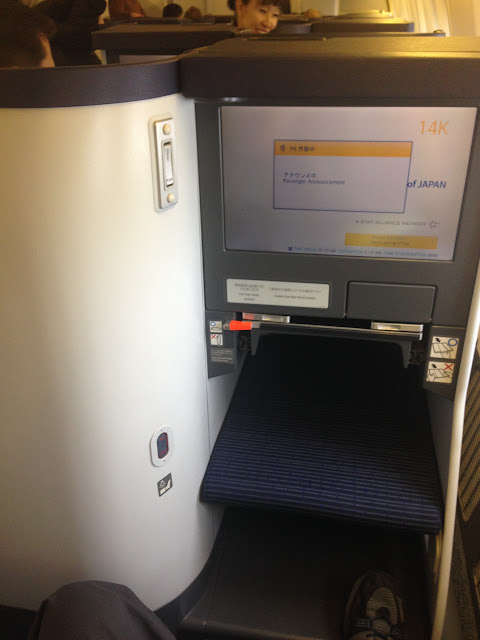 I don’t get too excited for this stuff typically, although am interested the type of bag I get by designers I do not follow and have usually never heard of.  This one seemed pretty simply by premium class cabin amenity bag standards.  I often keep and eBay these, although my favorites are still the Cathay Pacific ones which I use for carrying around my action cameras.  Nothing exciting about this bag or anything in it so just a quick picture here.  It was small enough I kept it for the moment to see if I could do something useful with it.  L’Occitane, sounds French.  Should I know it?  I certainly don’t!  No jammies, packaged here is the pillow and blanket and some slippers.  If you’re pushing US size 13 or above you may break the slippers. 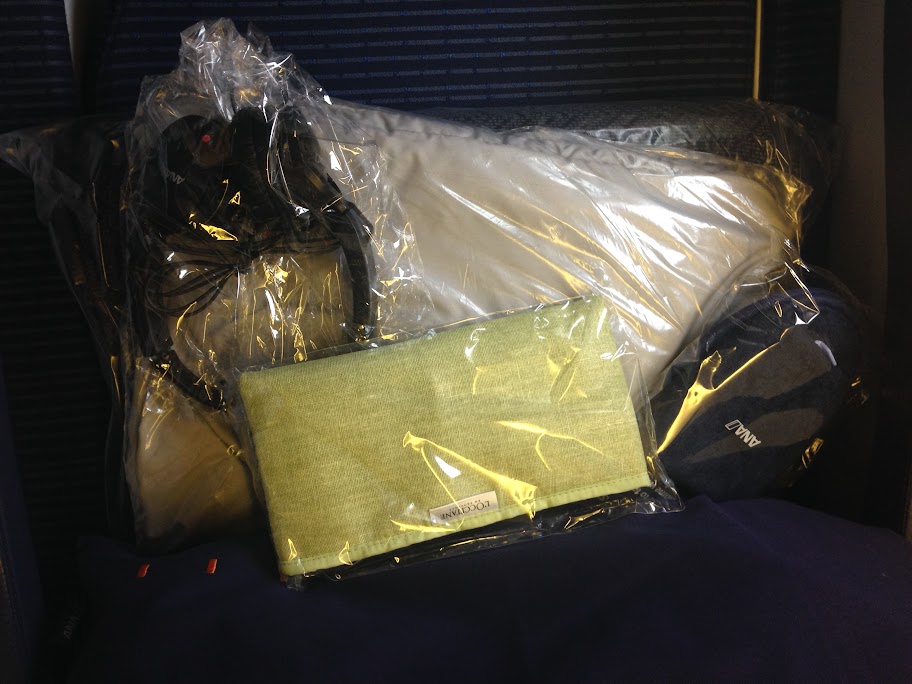 Om nom nom, isn’t this the best part?  I didn’t try any of the Japanese cuisine, sorry.  Wasn’t feeling that adventurous, so everything I pulled was from the international side of the menu, yet here are both.  The salmon dish was quite tasty.  The beef was alright.  The cheese and fruit plate kinda weak – wish I tried some of the other snacky items on the menu.  Chicken and cheese ravioli menu was ok.  I always enjoy the novelty of eating pretty good stuff on an airplane, although I wouldn’t point out anything as too exceptional here; the salmon was by far my favorite though. 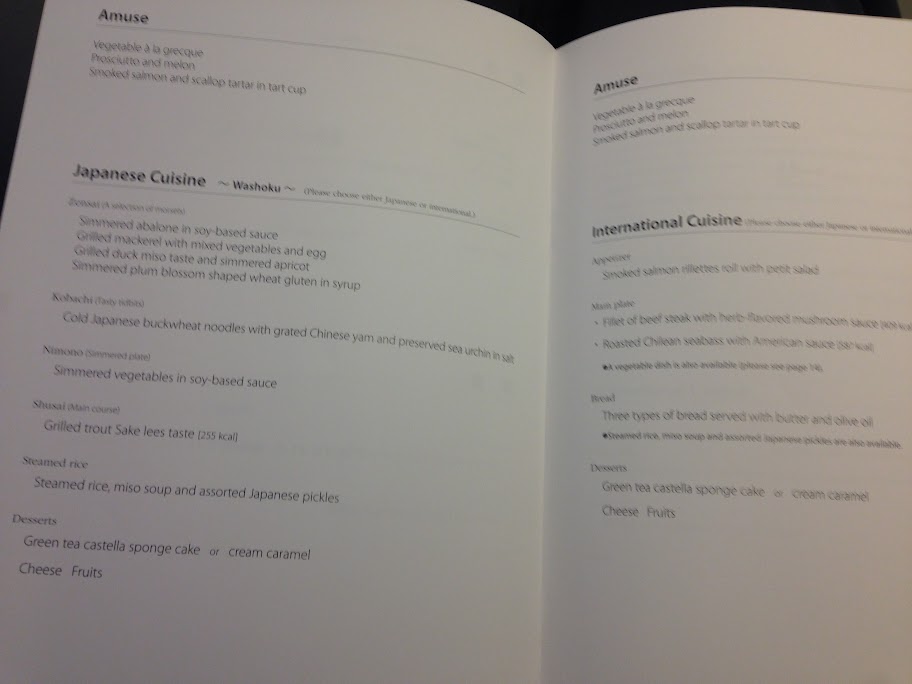 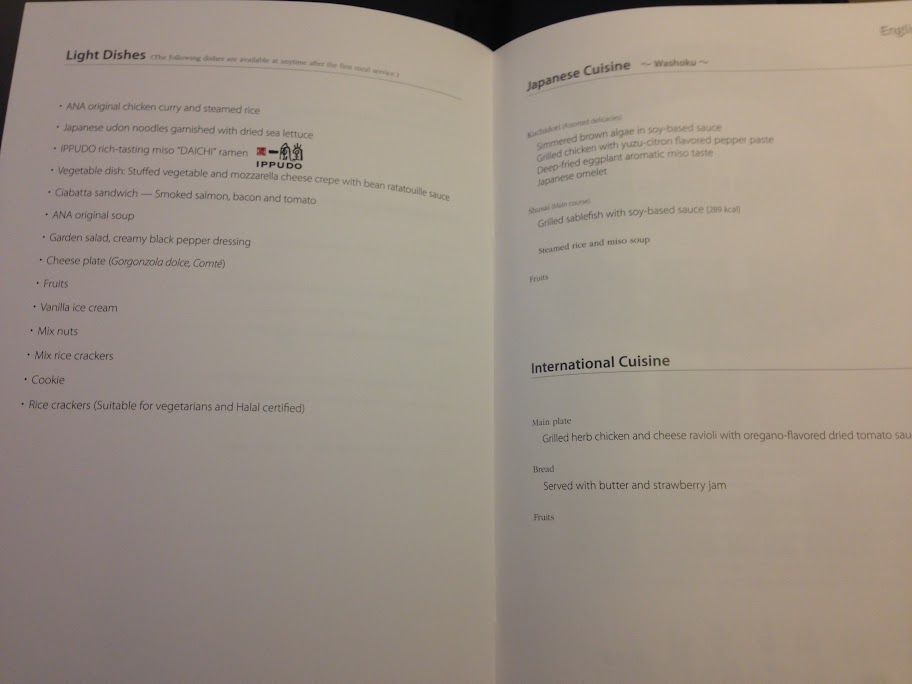 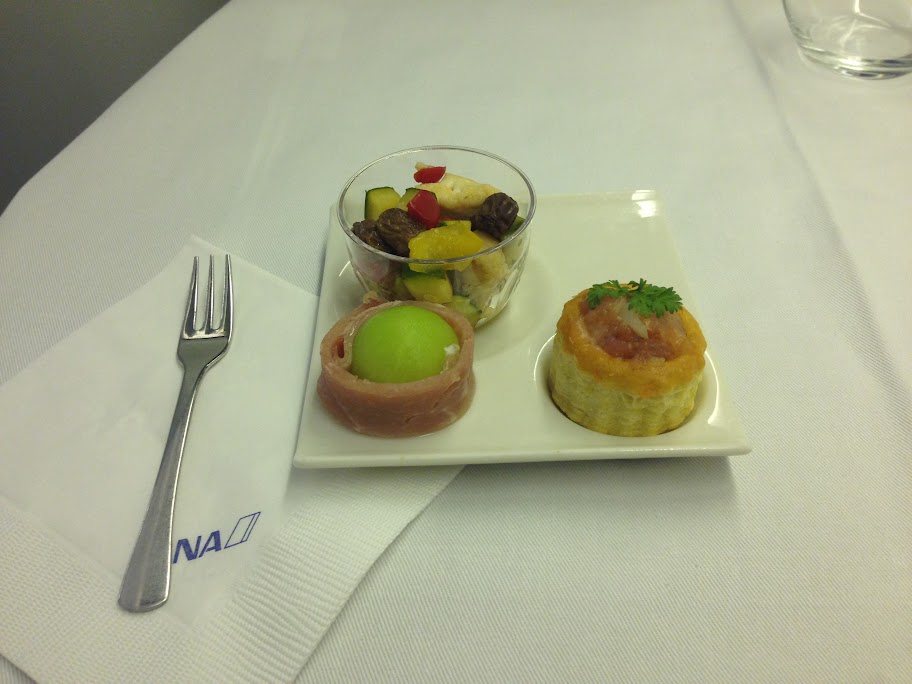 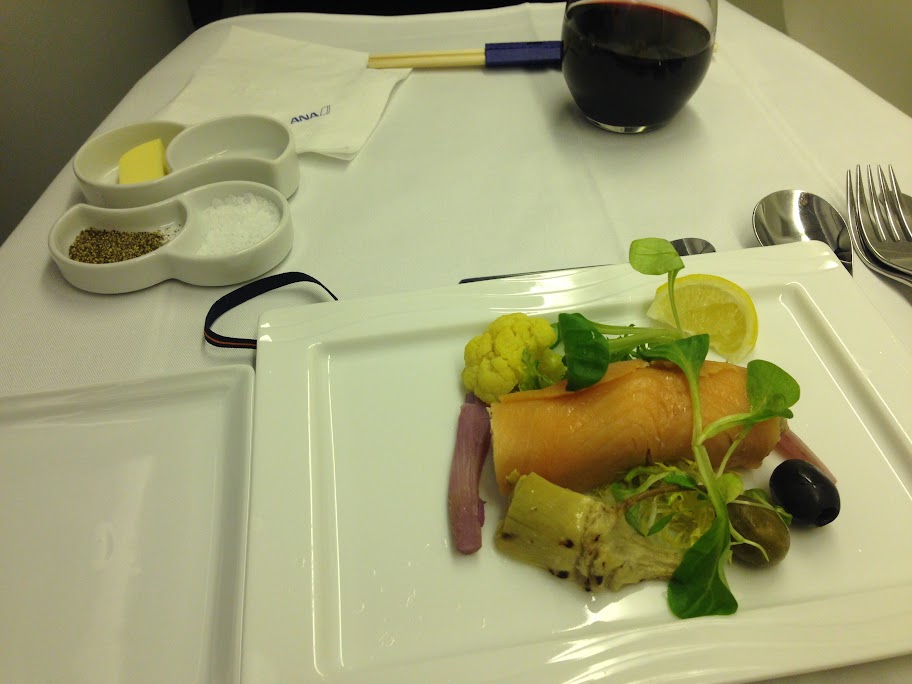 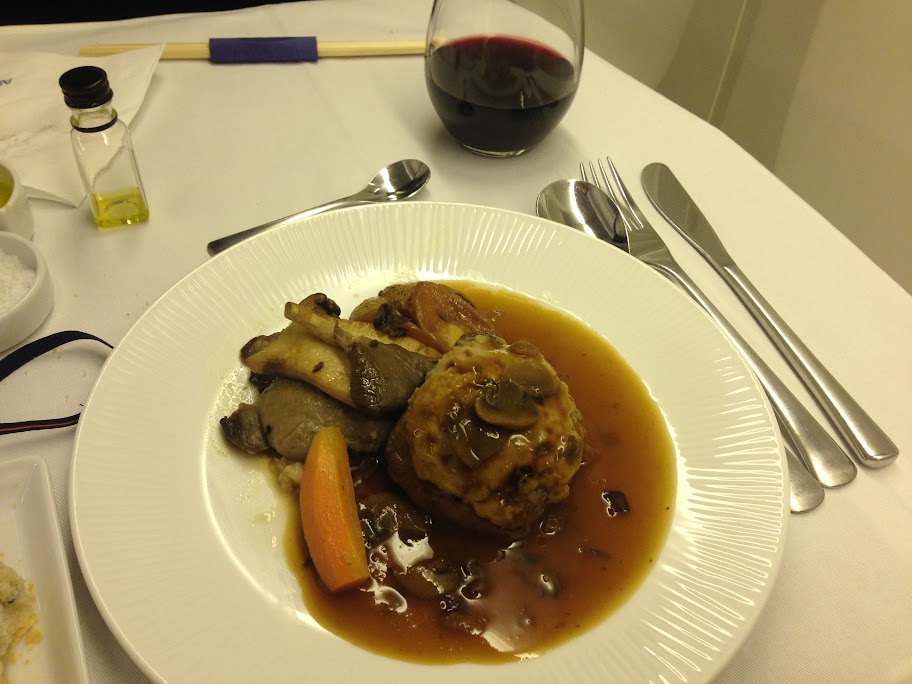 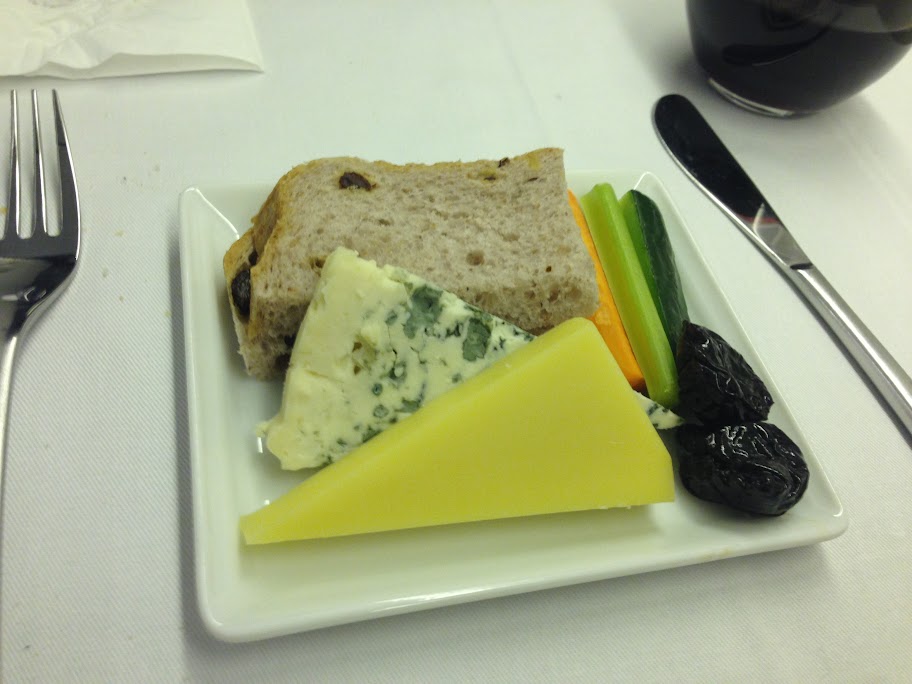 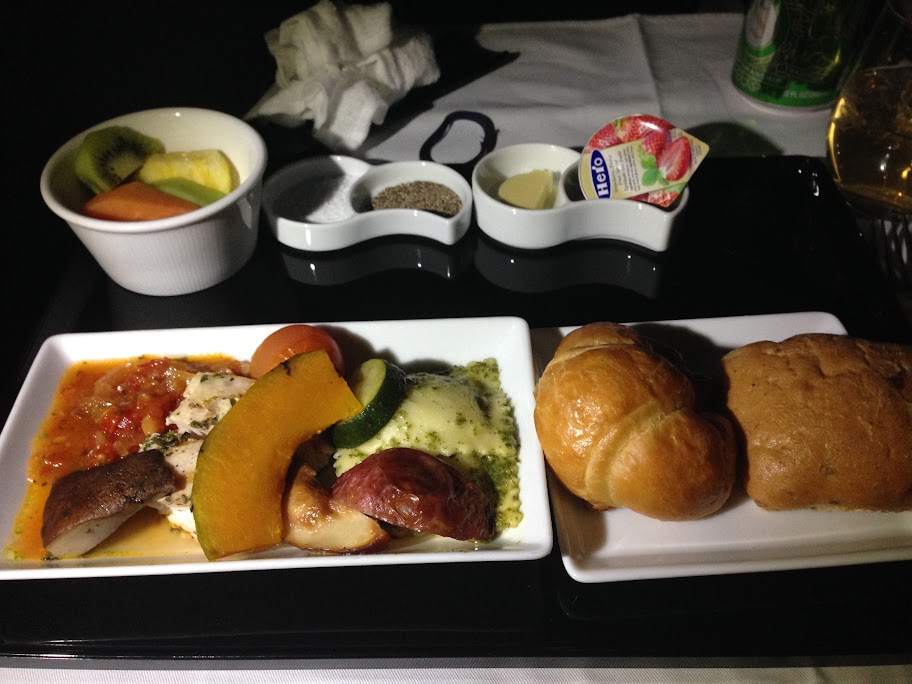