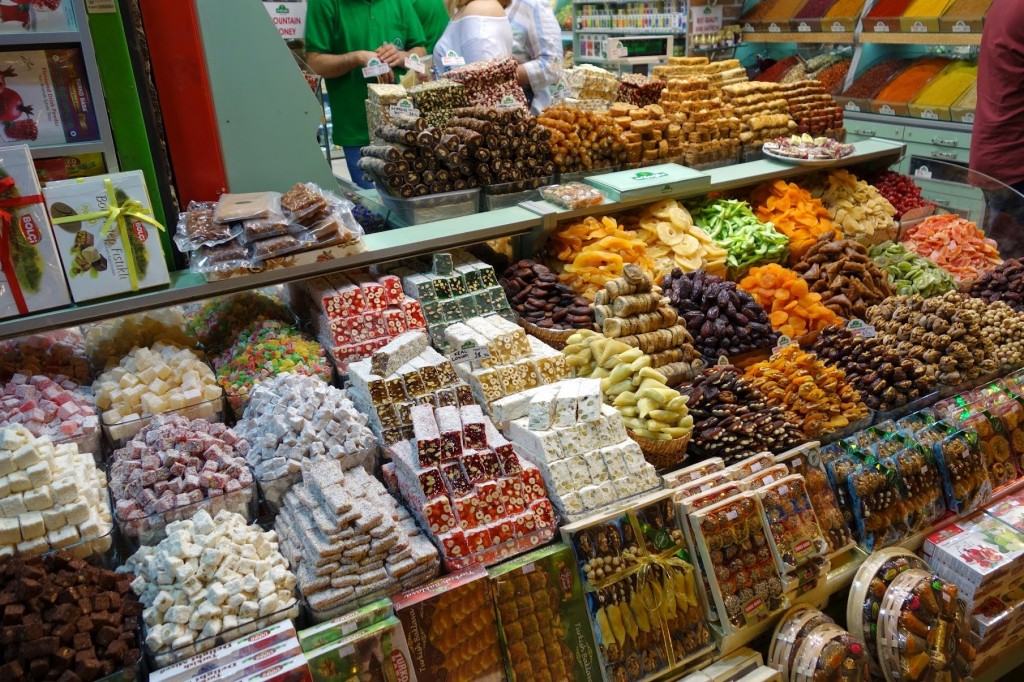 I went to Istanbul on a whim and winged my journey; something I am going to try and do less often in the future.  Istanbul was perfect for it though, so much different and cool stuff to see there; I really liked it a lot.  This has been my first visit to a Muslim country, at least one with such a long history, as I have been to Malaysia.  The people I met were great, the food was great, and as a cat lover I enjoyed seeing all the cats of Istanbul.

I took the Havatas bus from Ataturk airport IST to Taksim Square.  I also took it to get back to the airport.  It actually doesn’t operate exactly from the square but in front of the Point hotel.  There is another airport in Istanbul, SAW – don’t get on that bus incorrectly if you’re flying out of IST to leave… which I most certainly did.  I missed the sign and the friendly advice I was given seemed to imply all the buses went to the same place…  Thankfully I noticed and remedied this mistake within about 15 seconds of the bus taking off.  Although it was a bit embarrassing dashing off and I think I bumped some dude’s head with my bag, oops sorry dude.  At the airport, I bought a bus ticket at a kiosk and if I recall correctly, it would not accept my (non chip and pin) card.  I ended up using my debit.  I also used my debit at the ATM to pick up some Turkish Lira (TRY) which I generally used most of the trip.

I stayed with a host from airbnb.  She actually slept on the couch while I used her one bedroom so I felt a little bad, although I am guessing my airbnb fees went a pretty good way to help pay her rent.  She was a really sweet girl who had two fun cats, one night when she stayed out a friend’s place they both slept with me.  They were always curled up balls on my bed once they got tired.  My host introduced me to her neighbor, cooked a couple meals and invited me out to see a friend’s band one night too.  Much more fun and interesting than staying in a hotel!

The flat was down a street/alley off to the side that seemed sketchier at night when trying to find it, although it was right off the very famous Istiklal Avenue.  Finding it in the dark I was really more fearful than drunk tourists than anything else.  It ended up being a great spot. 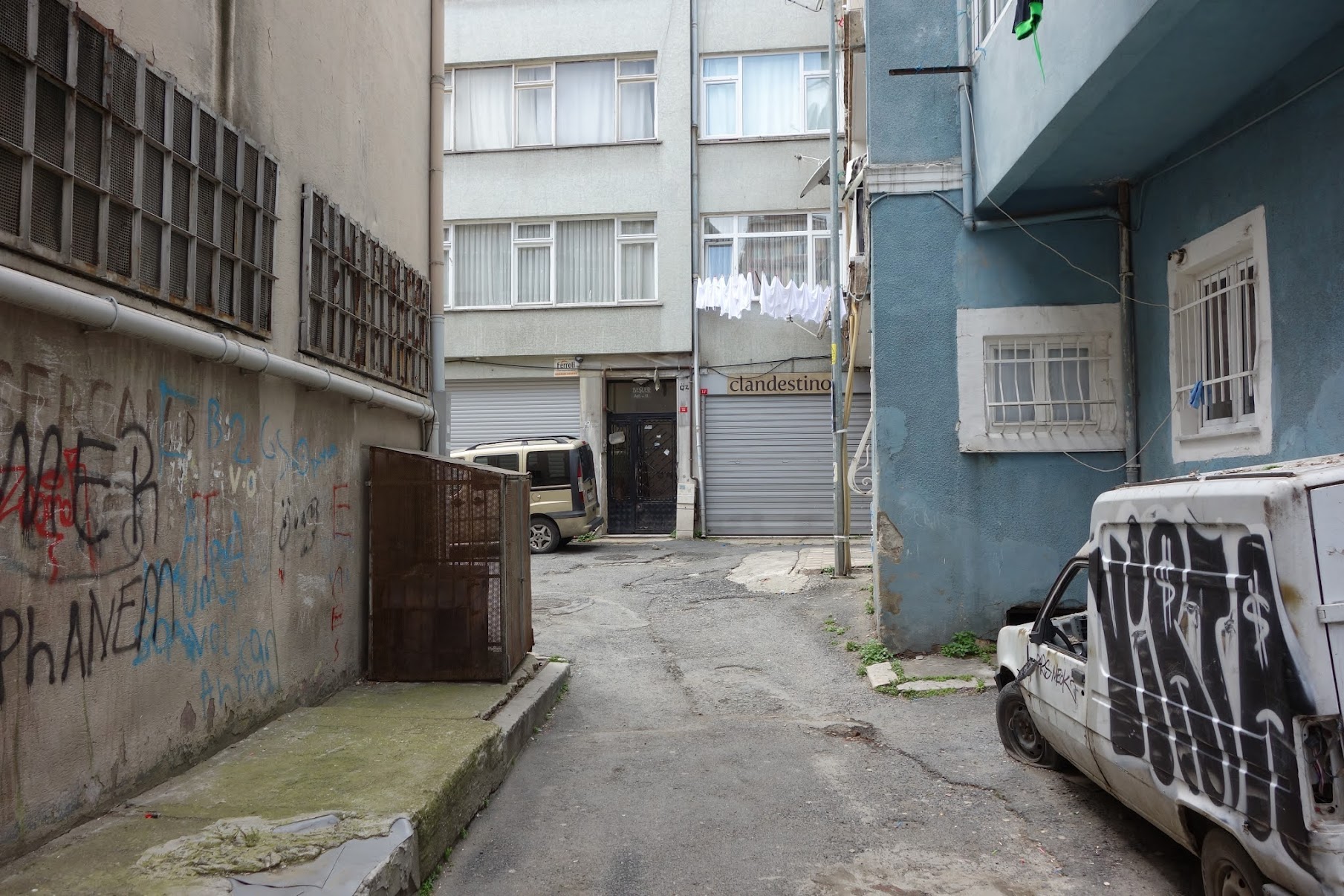 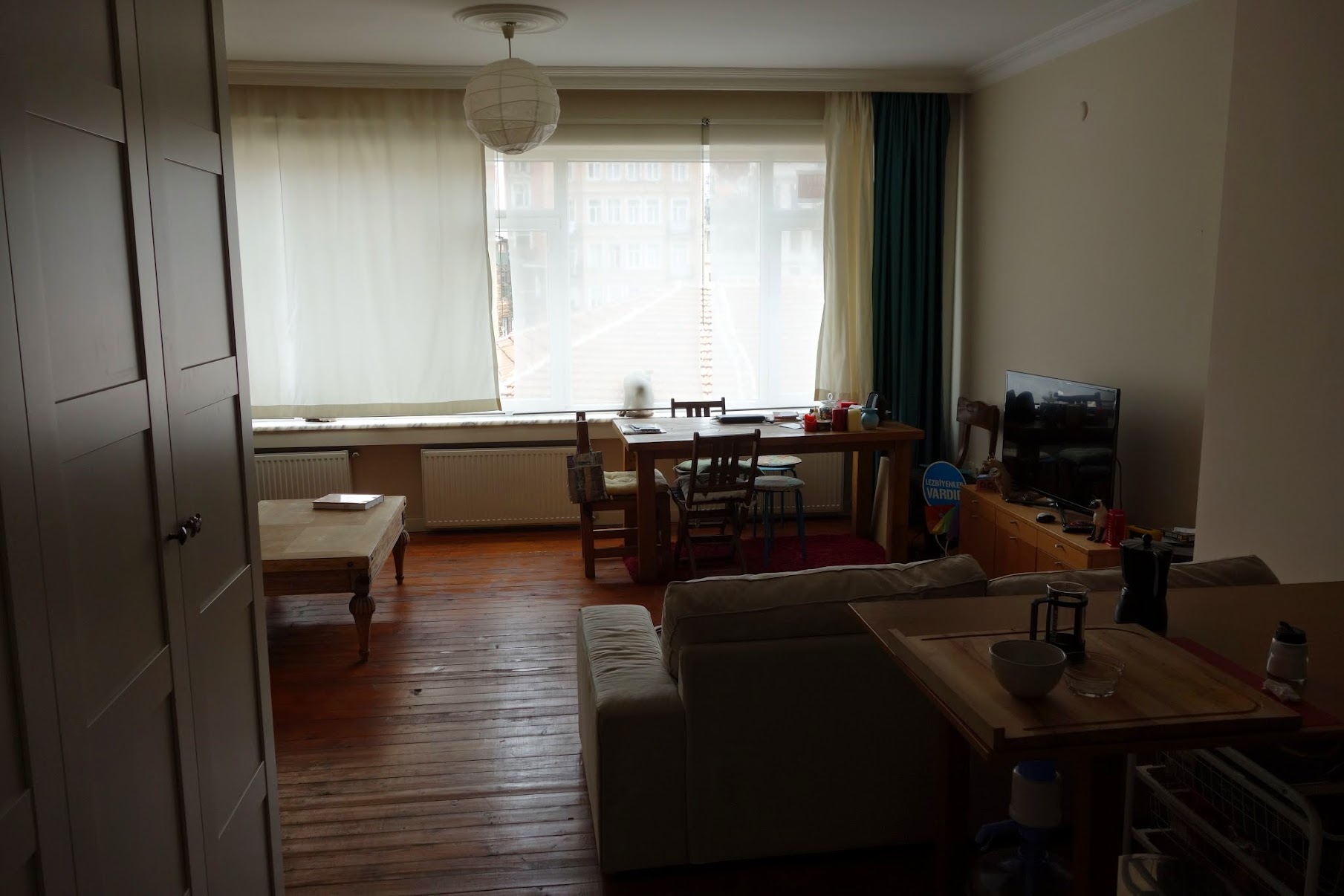 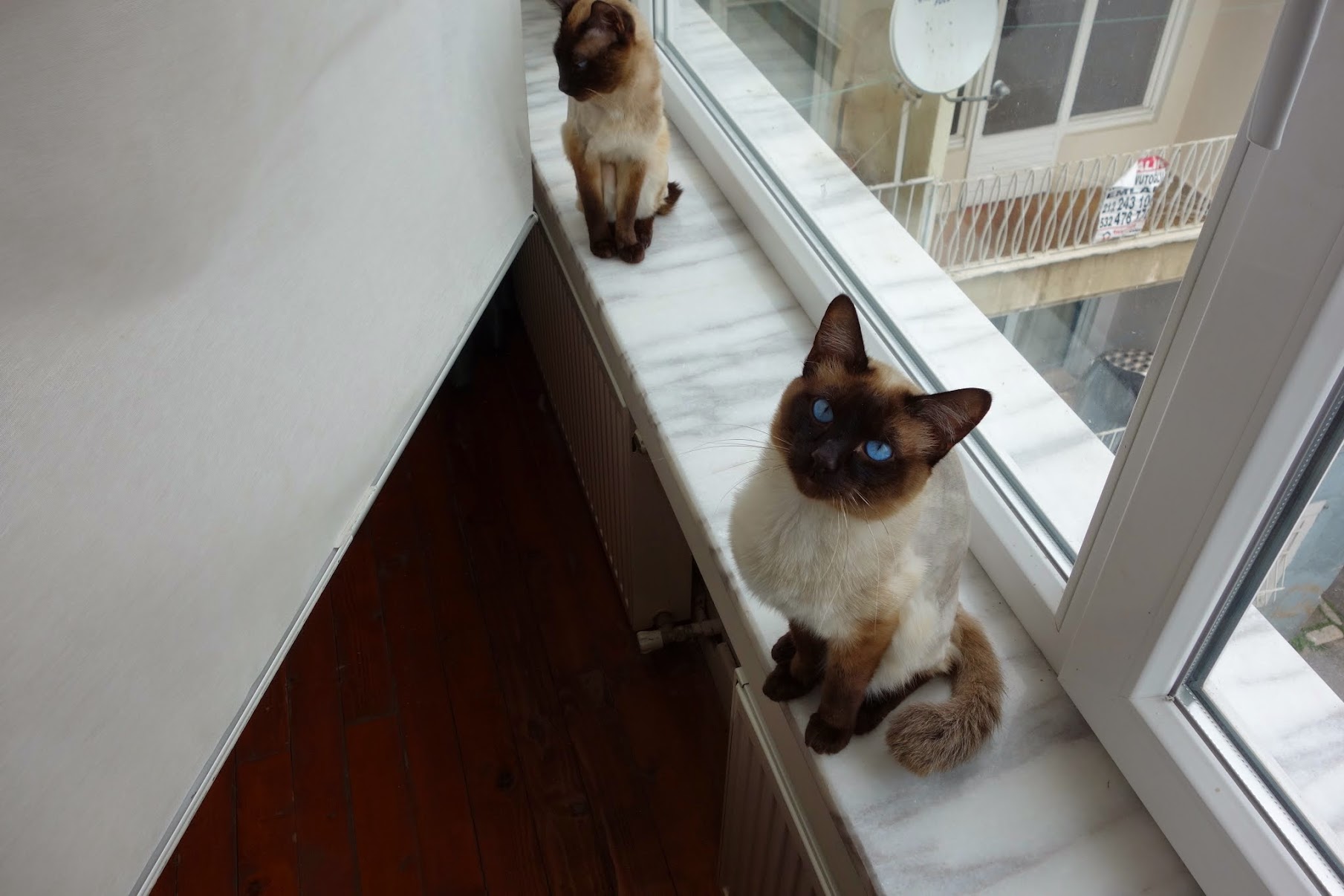 A common site on my bed… 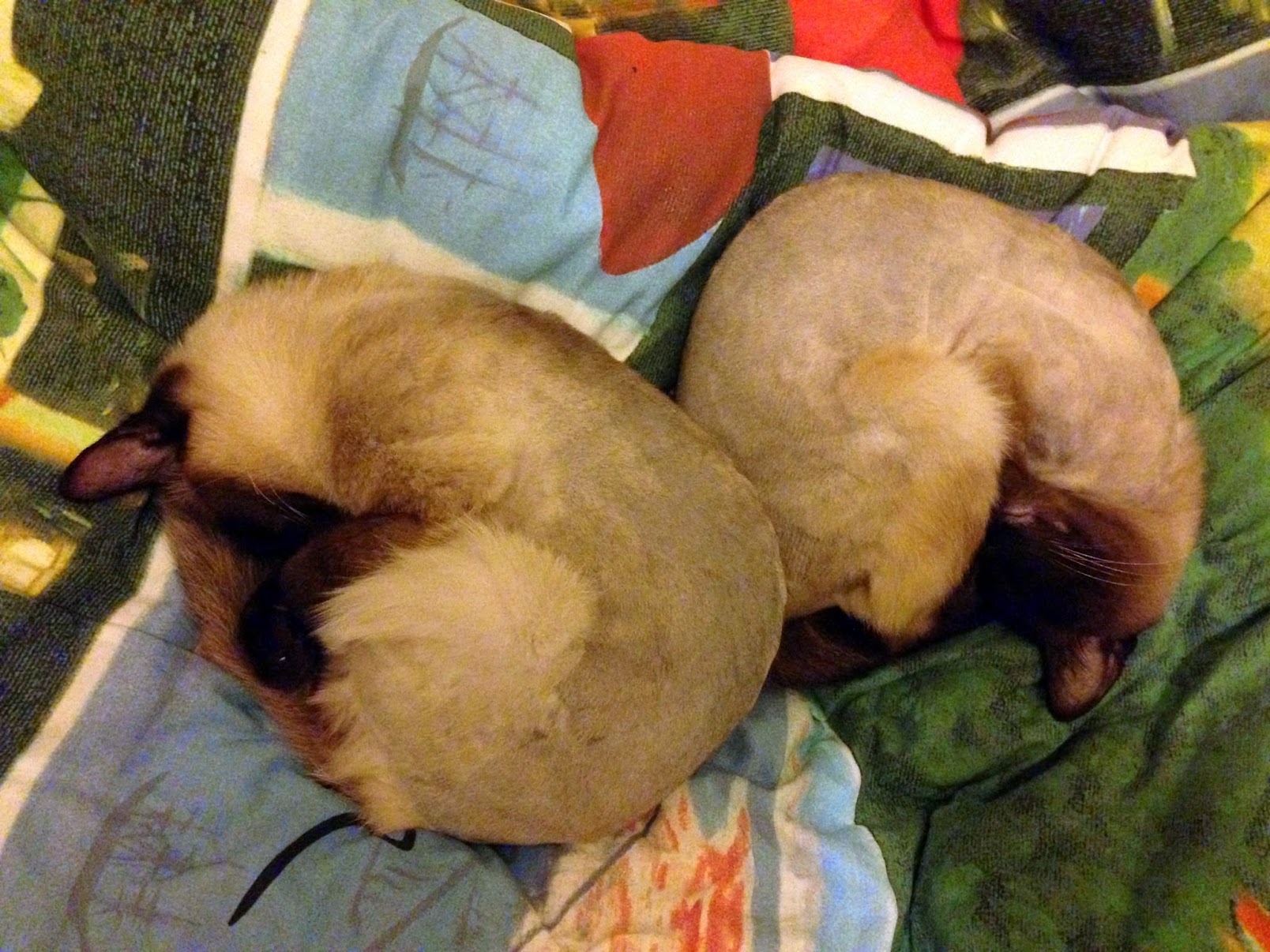 My host’s place was in the Beyoglu district, the Galata neighborhood.  To see most of the sites mentioned in my other Istanbul posts one will have to cross the bridge by foot or tram, although the former is good exercise and the latter is pretty easy to figure out and take.  To ride the tram, put cash into one of the machines to get a token.  I don’t recall how much, and if it’s your first time doing it in the Old City area some kid may be eager to help you out (expecting a tip afterwards.)  Stick with tram line T1; going from Galata to the Old City, the line would start from Kabatas and end at Bagcilar.  The stop I started on was Tophane and the one I would get off on is Sultanahmet.

I walked around Galata a lot.  My host gave me a map one day of it, and I immediately thought…  this is so cool, she’s totally giving me the map for Quest for Glory II!  From some of my computer computer gaming posts visiting museums in Berlin and Stockholm it should be easy to tell I’m a bit of a computer geek and one that grew up playing some of the classic Sierra games.  I actually have the game (a couple copies actually) and pulled out the map when I got home…  Yeah, they aren’t that similar but basically this is what I felt like she was giving me. 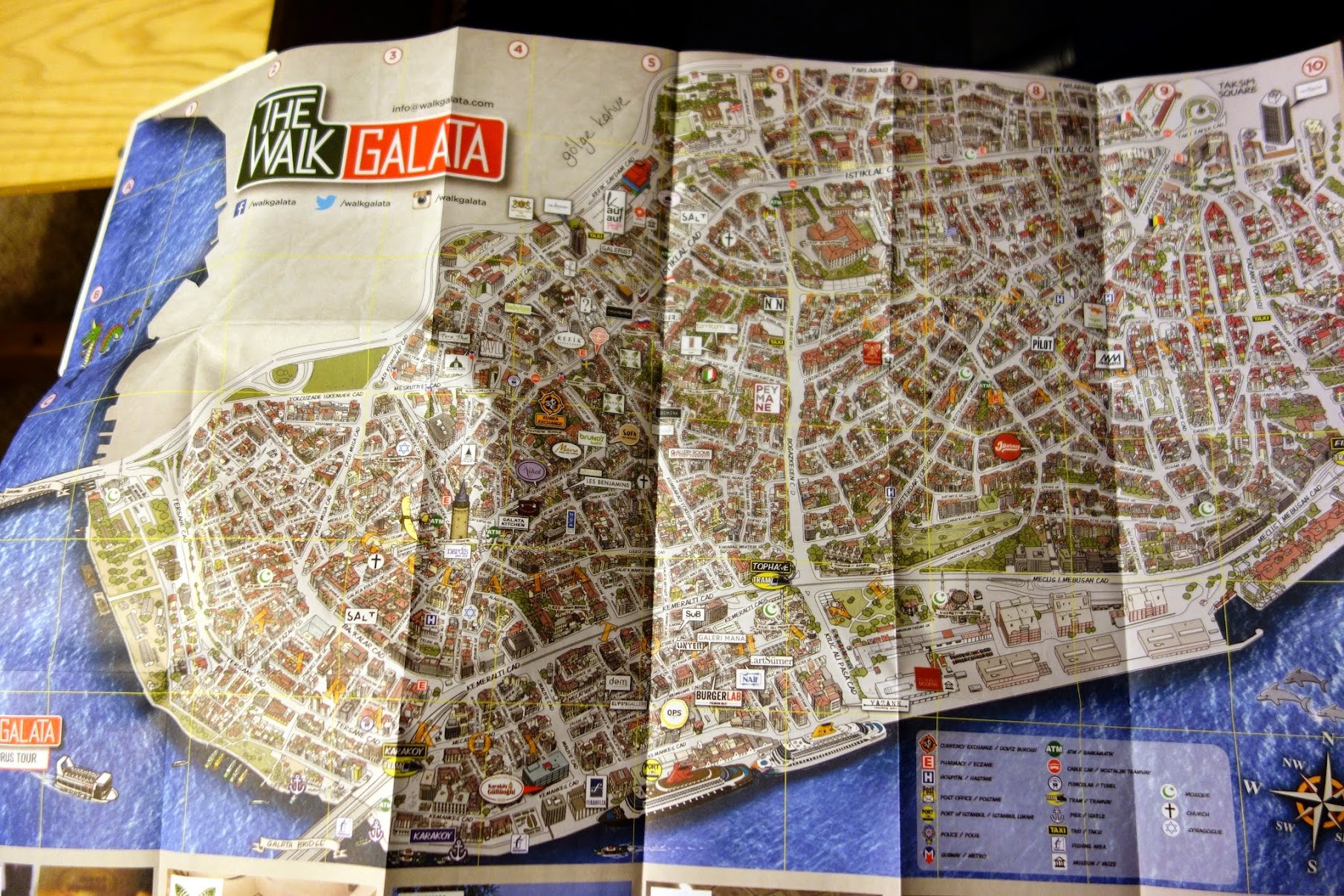 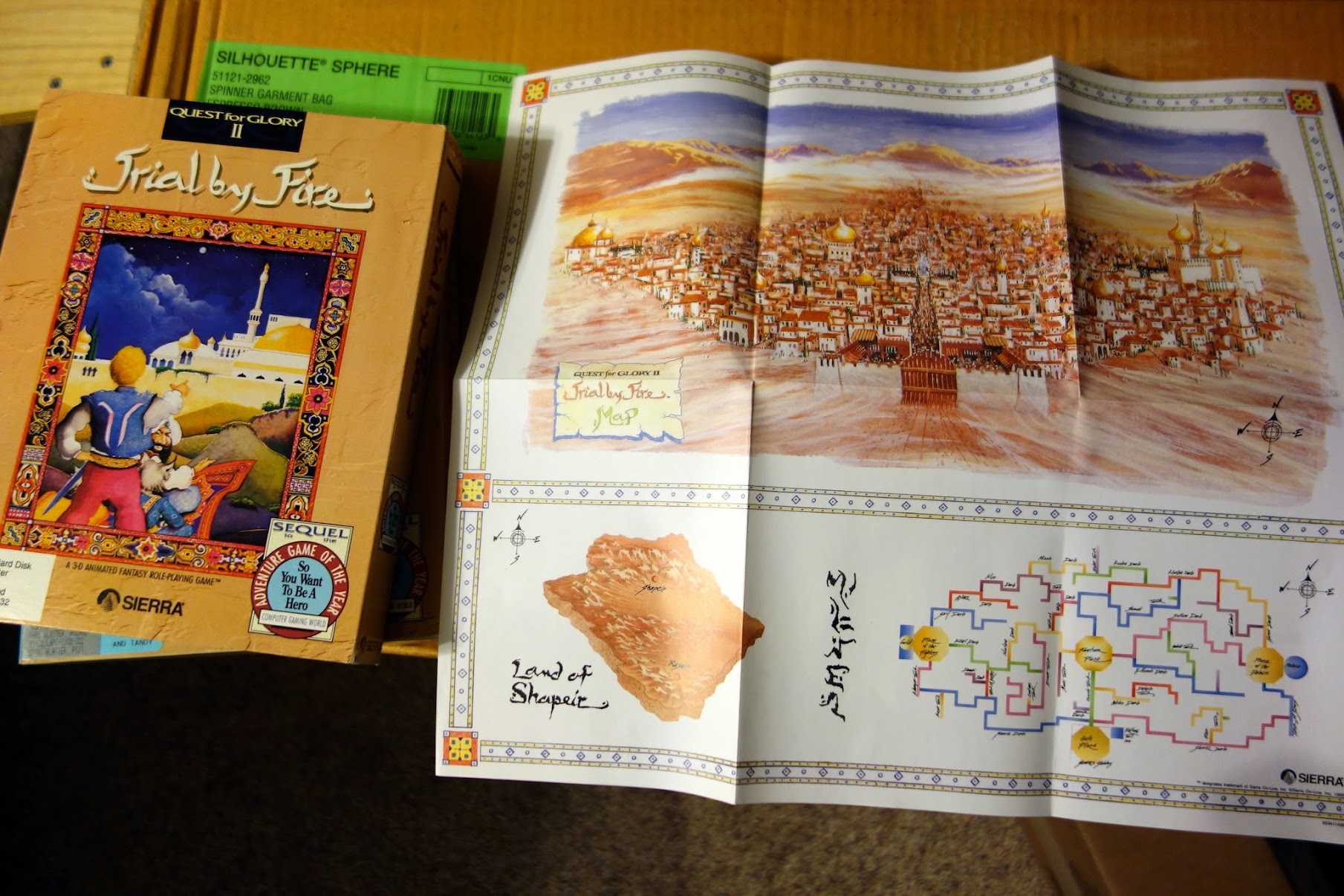 Night shot of the Galata Tower… 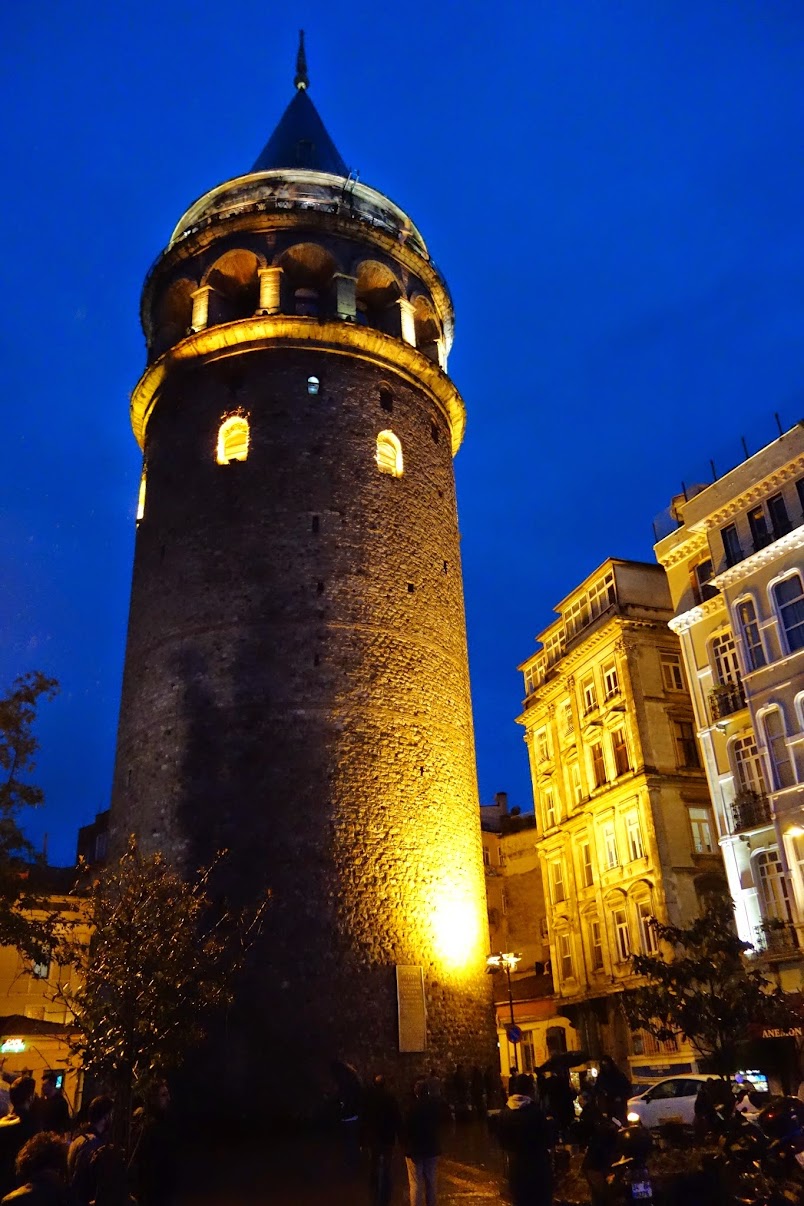 Istanbul was a great city to just arrive at and walk around exploring.  Much more rewarding doing this here than anywhere else I’ve been as I recall.  It was nice being close to Istiklal as my main vein from whence to go exploring but truly anywhere I was wandering I really enjoyed discovering the area.  Istiklal during the day… 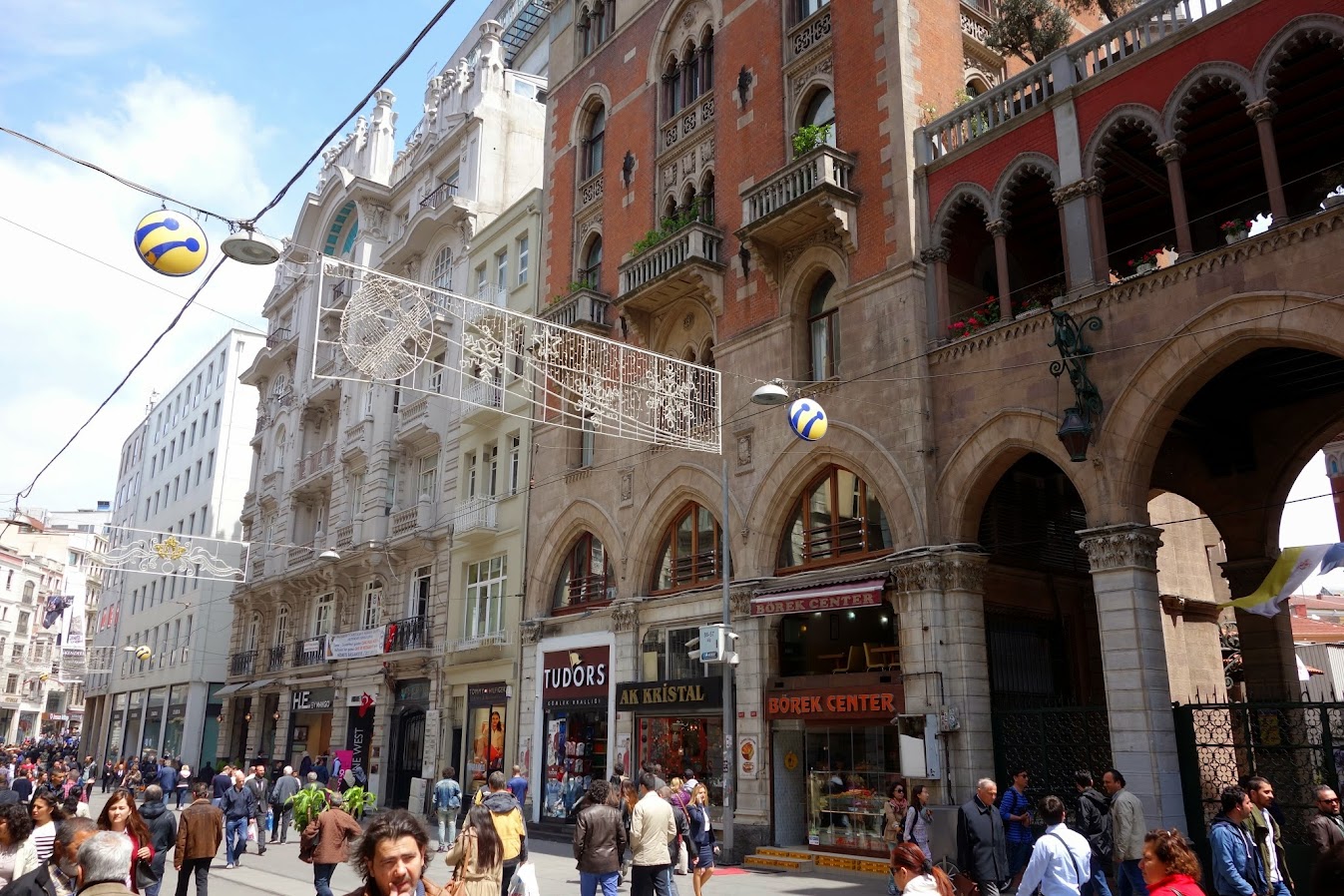 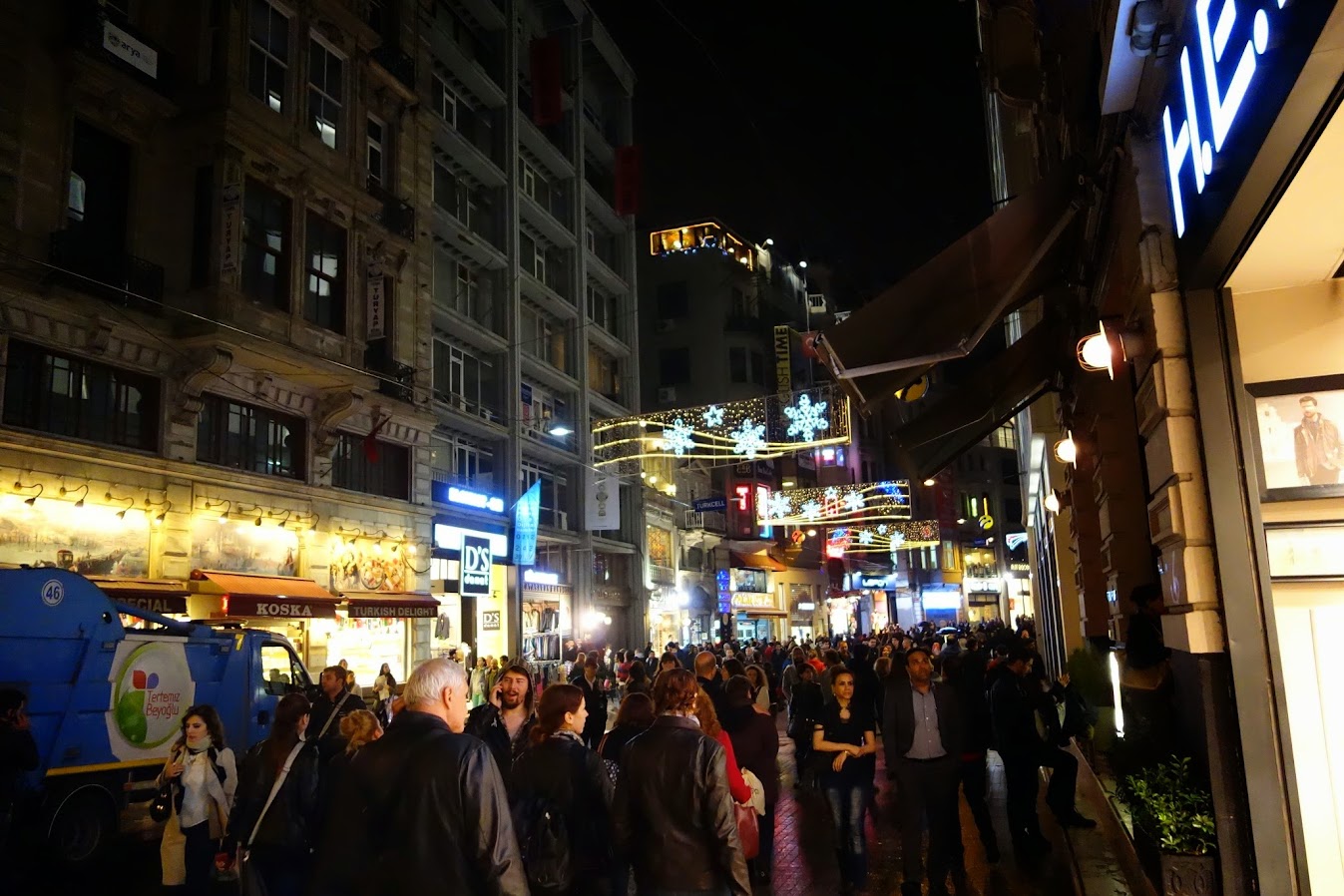 I was surprised at how little some of the staff at restaurants spoke English.  Not that I go around expecting everyone to, but it is a language a lot of business done in, and tourists speak, and is widely taught.  Nonetheless I always had good food and got the bill for it eventually! 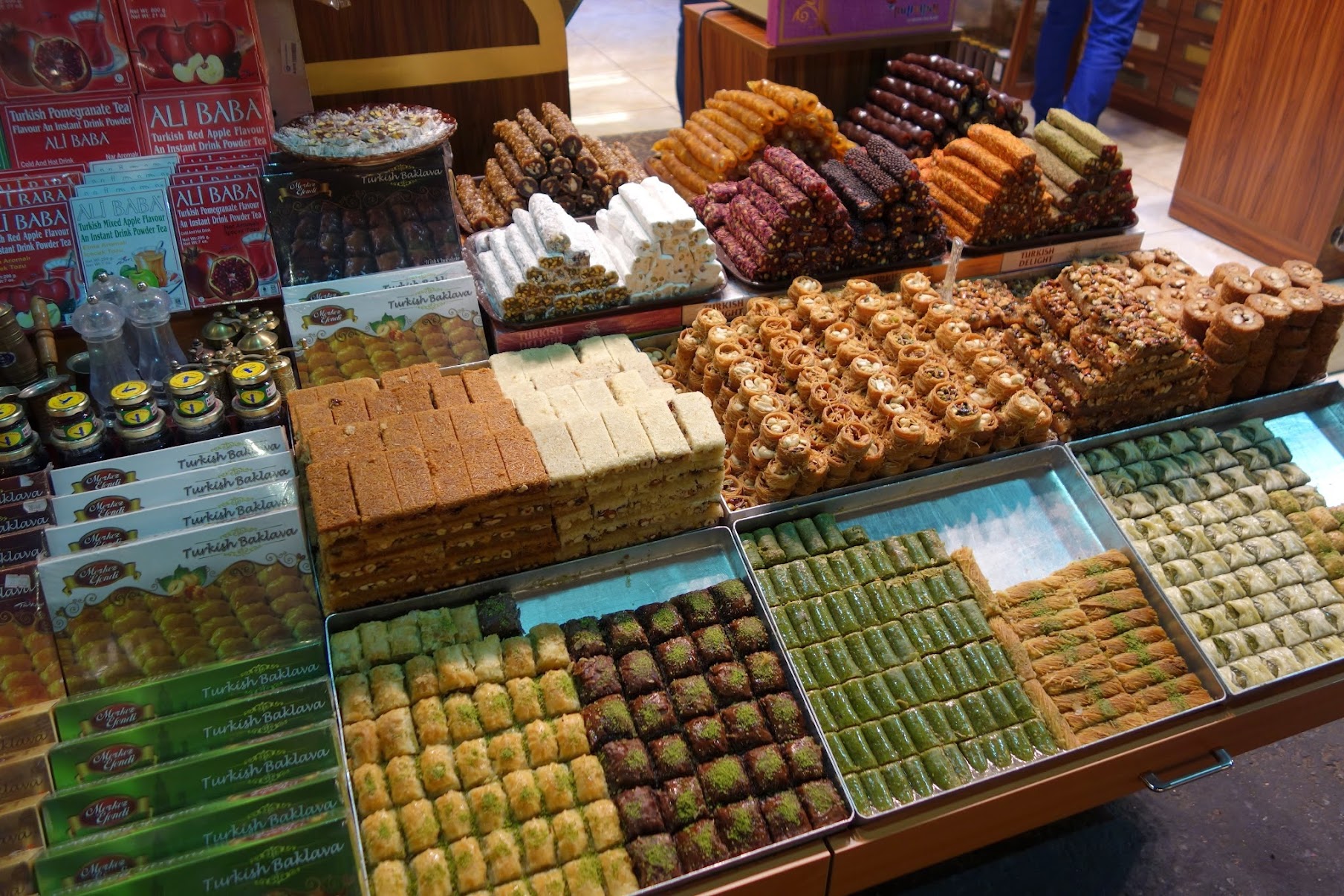 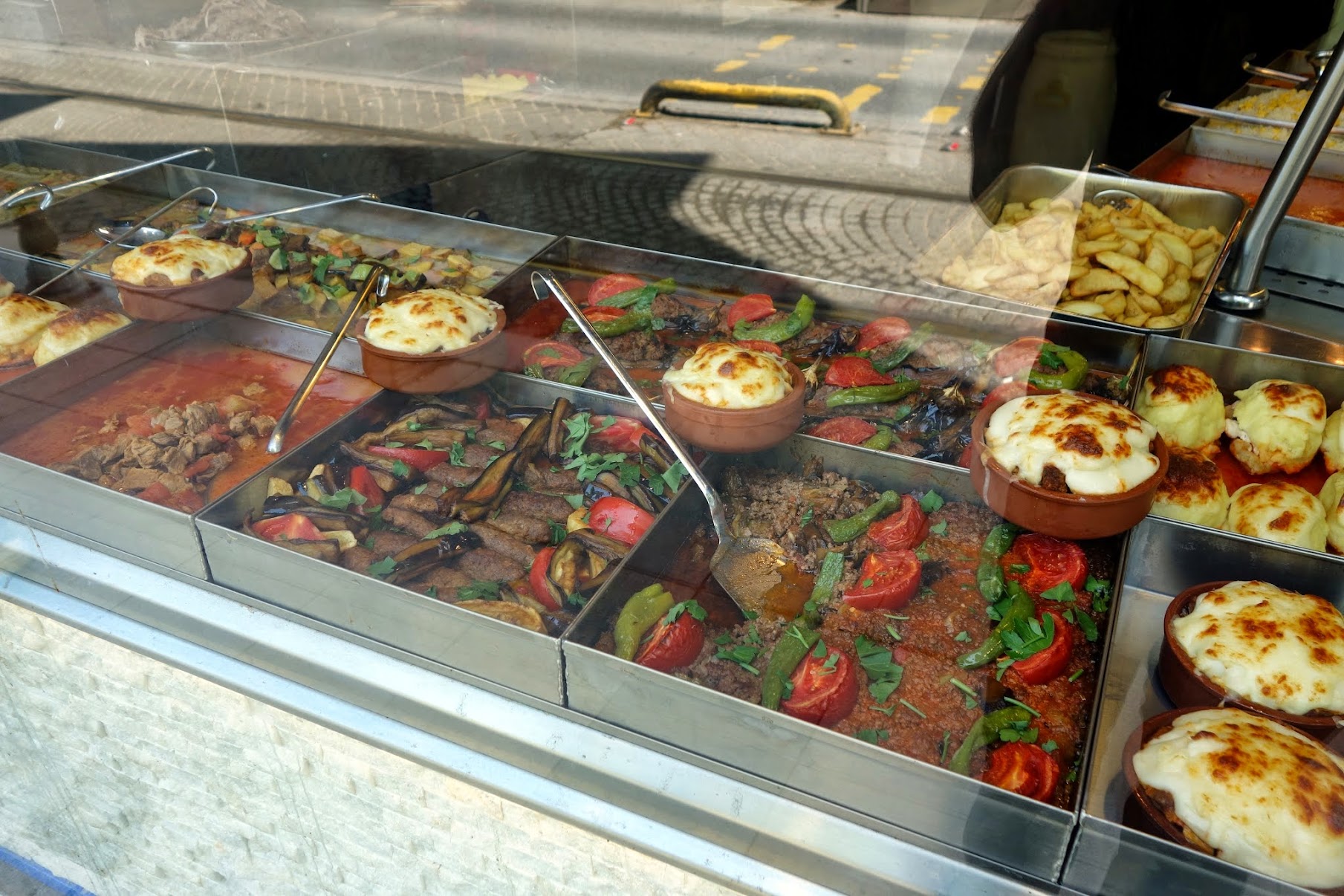 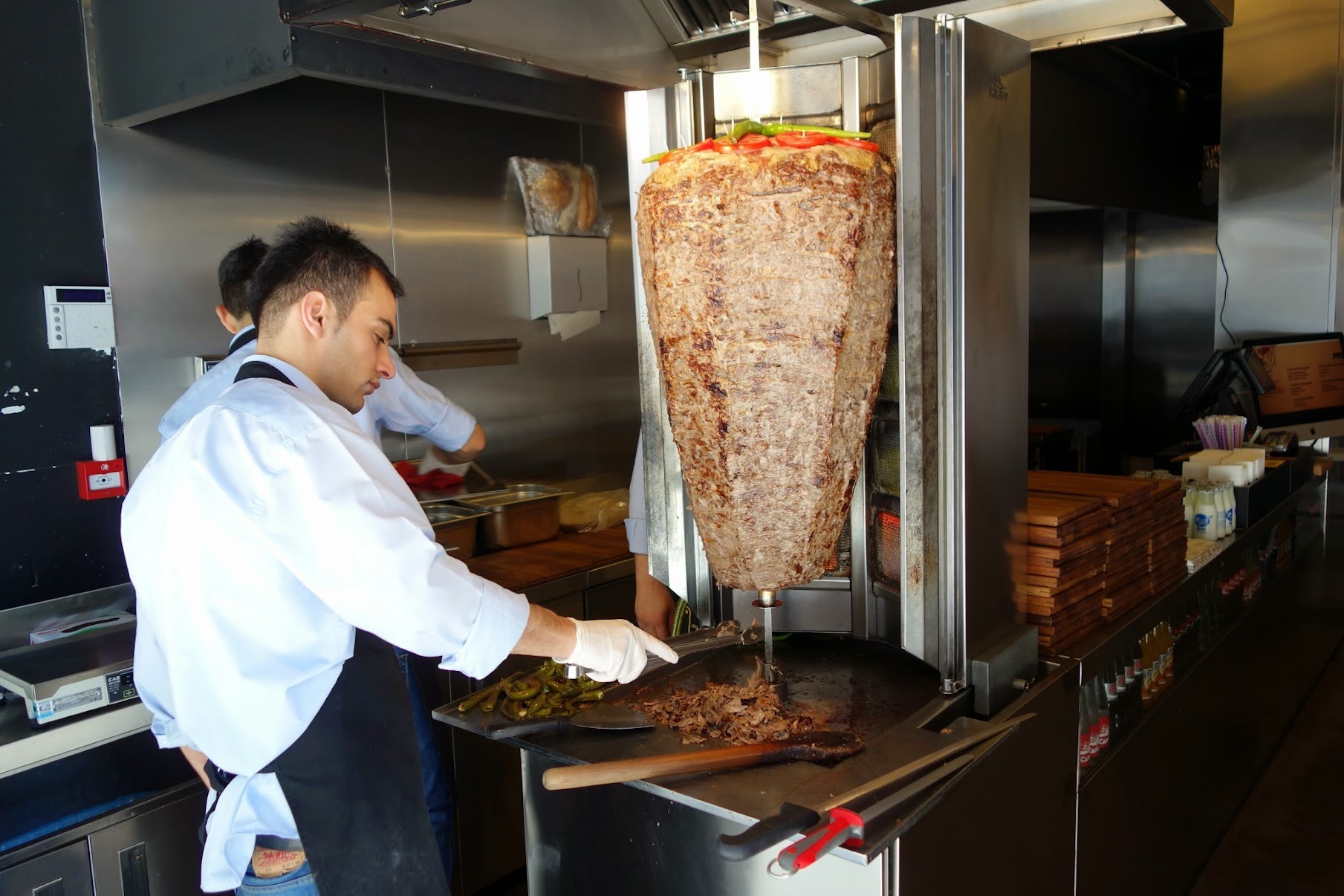 The second time I had this I had a guy who spoke slightly better English, he called it a beef straw and also asked how much meat to put in it.  Very yummy.  I think it had fries, tomato and little peperoncinis in it…  whatever it was I could use one right now.  Apparently it’s a chain, Kasap Doner. 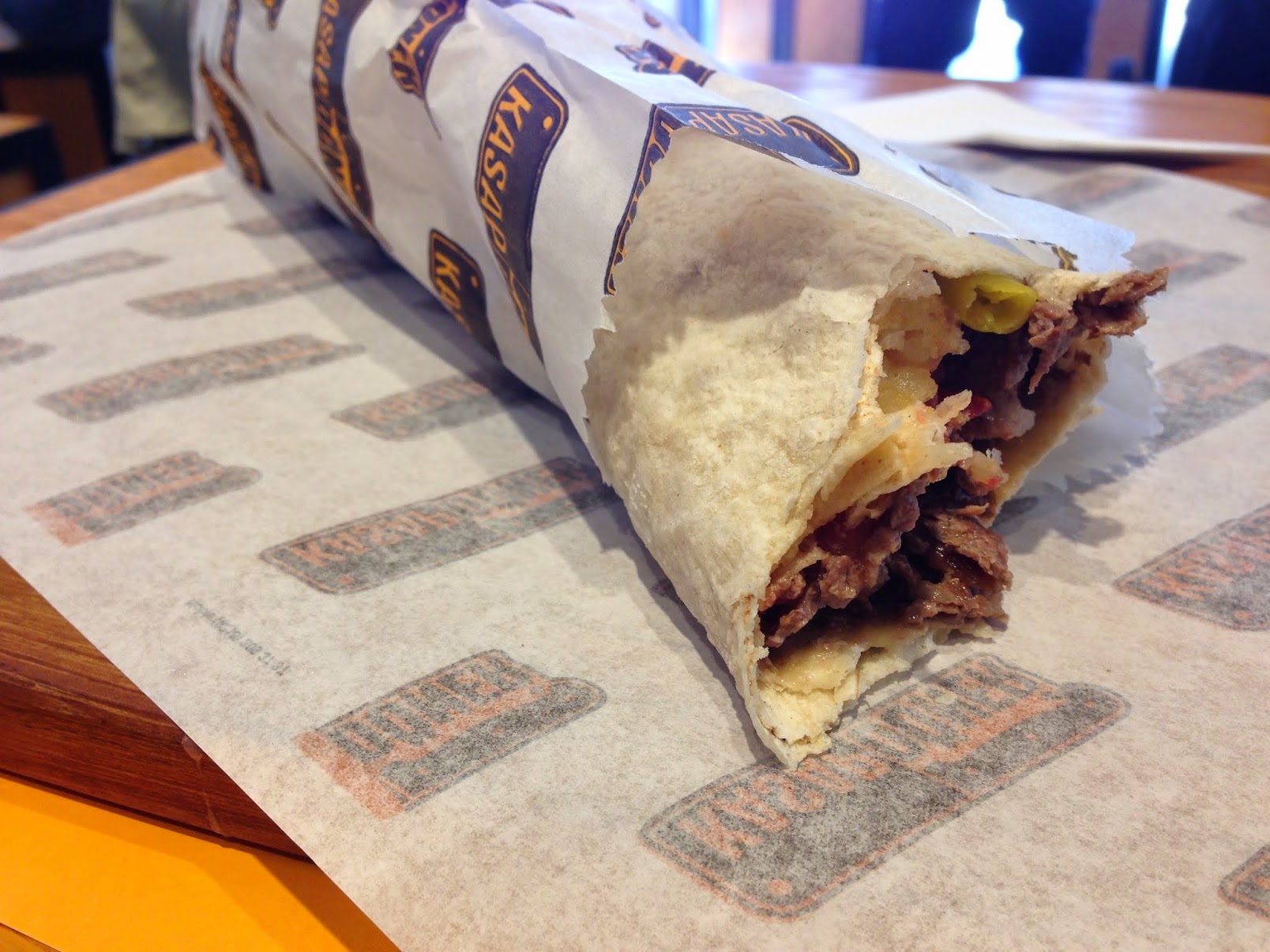 It’s a good idea to keep change handy rather than leave it in your room. Tram is a few lira, public bathrooms 1 lira that I encountered.  Simit is 1 lira, cheap and good to munch on when hungry and walking around exploring. 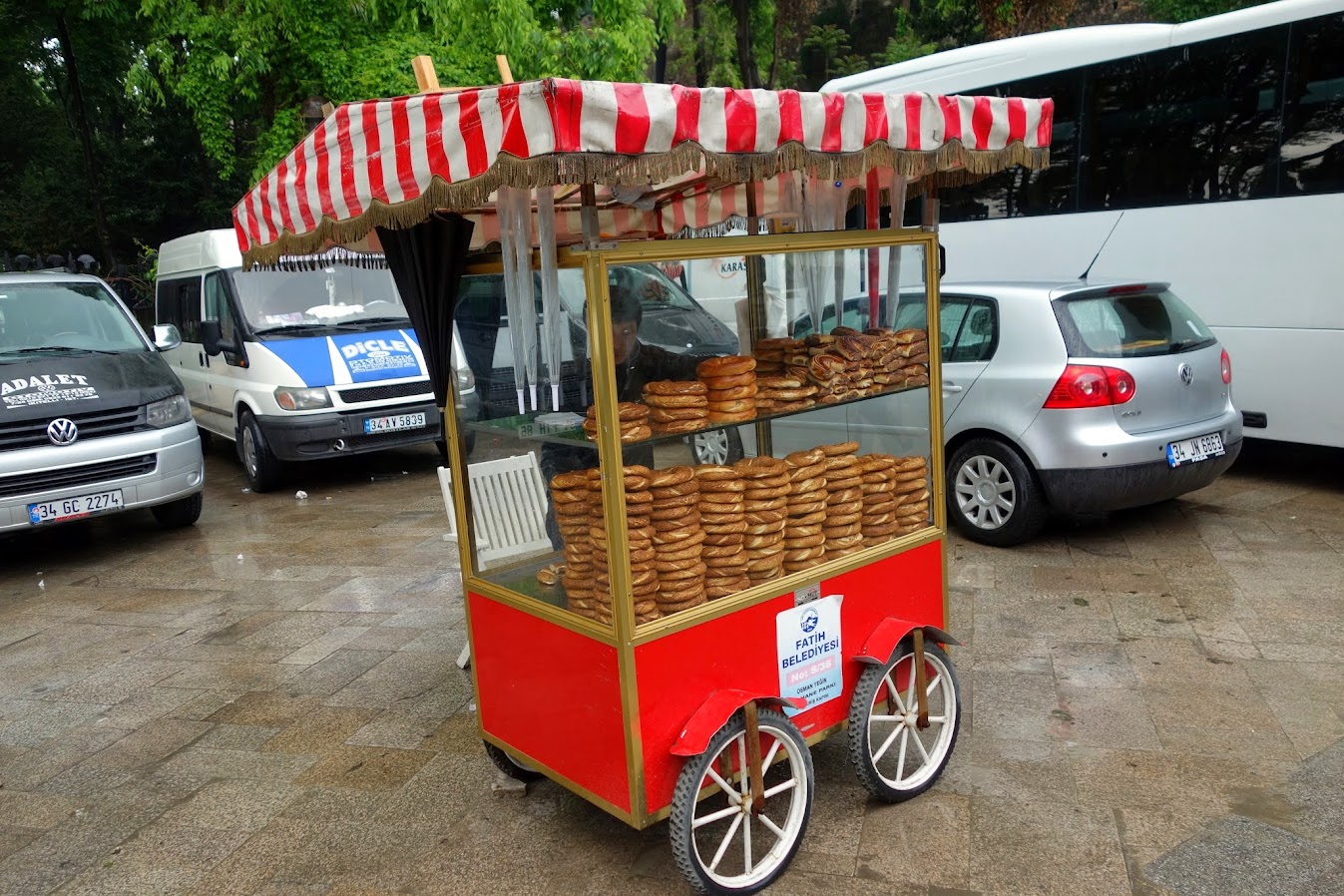 I didn’t get it, but it’s highly worth considering/buying the Museum Pass, as the costs of sites add up quickly and it will pay for itself with a visit to only a few.  Aside from that, pass holders can more quickly gain access because they don’t have to wait in the longer lines as I did for tickets, although none of were too painful of waits either.  The math is pretty quick and easy to make the pass worth it so I would highly recommend any new visitor to Istanbul to pick one up.

I went in May and it ended up being fairly rainy; thankfully my host’s neighbor had a non-pink umbrella for me to borrow.  Consider bringing a small travel one or at least being ready to pick one up.  Cheap ones certainly became available once it started raining, although cheap umbrellas are kind of a pain as well.

There is an e-Visa program although i got mine at the airport.  It’s $20 online, I can’t recall if it was the same at the airport.  I was one of only two people picking one up so it was done pretty quickly.  The fee will vary by incoming country but must be paid in USD.

No immunizations needed.  I picked up some money at the airport ATM and some other ATMs around the city, which weren’t too difficult to find.

Be prepared to take your shoes off before visiting a practicing mosque.  There will be bags available to put them in.  I think there was something provided for women to cover themselves if more modesty is required although I don’t recall exactly as I didn’t have to worry about that; I think there were scarves available.  No shorts.  Much of the mosques are accessible although entry is not available for tourists during calls for worship.  During this time, the Blue Mosque had an information session going on for Islam that I was routed to, which was interesting to attend.

Travelers from the US will need power adapters.  220v round 2-prong plugs.

Online it’s stated that the water is safe to drink in Turkey/Istanbul although heavily chlorinated so the taste may be off-putting; my host did not drink it and head a large jug available for drinking water.

I took my shoes off and left them outside the door at my host’s flat, which seemed to be customary.

It’s fairly hilly – at least in Galata (not really in the Old City) – wear comfortable shoes to trek around.  It’s definitely a great place to explore on foot.  Some areas are relatively steep.  Depending where I was I may be walking on road or on the steps/sidewalk next to it.  An example of slope can be seen in my video on the cats of Istanbul.